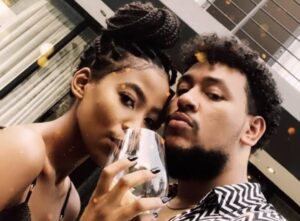 AKA And His Girlfriend Nelli Reportedly Engaged On A Heated Argument That later Involved Police & Lawyers. Not so long ago Supa Mega was flaunting the love he shares with Nelli Tembe, a 21 year old girl he dated after breaking up with his baby momma DJ Zinhle for the second time. It seems the new romance wasn’t lived long enough.

Over the years we have witnessed the ups and downs of AKA’s love affairs from DJ Zinhle to Bonang, Nicole Nyaba and now Nelli. The rapper has never shied from exposing his lovers to the public, even releasing songs for them. But it’s been allegedly proven that the demon of cheating can’t let go of him.

According to the latest news reports by City Press, The policemen on the scene said they found the couple going at it with Nelli eventually claiming she was tired of him and was moving out.

It was further claimed that the two ended up at Randburg Police Station where they tried to lay criminal charges against each other. Nelli claimed AKA man handled her and he said she slapped him.

The fight allegedly continued at the police station but they eventually decided not to lay charges against each other.

“They both threatened to lay charges against each other, but in the end, they didn’t. They even called their respective lawyers who became mediators before leaving with their respective clients, After a long discussion and the realisation that they are not opening cases against each other, the two were told to go. But emotions were still running high. Nelly, who had left the house with all her bags, got into her lawyer’s car and left,” read the reports.

The last time the Energy rapper did something to Tembe which wasn’t revealed, he bought her an overly priced bag of Louis Vuitton to apologize.

None of the two have come forward to comment on the reports.

94% of Bitcoin investors are making money