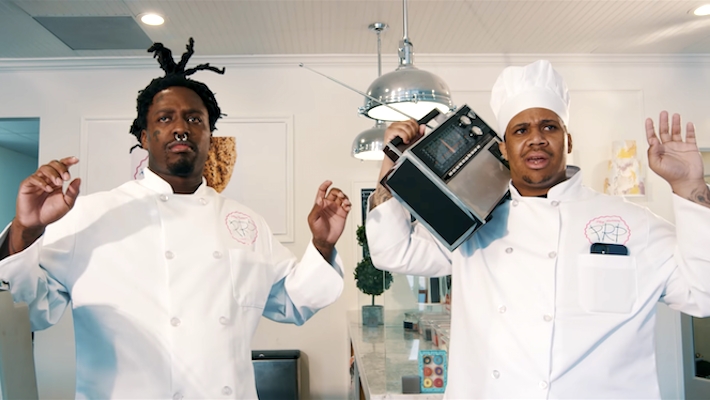 In a storyline that solely ALLBLACK may prepare dinner up, the Bay Area rapper takes a job at a bakery and saves the day when issues get actual in his hilarious new video for “Ego.” Assisting him within the shenanigans are Drakeo The Ruler and Kenny Beats, who play supporting roles and supply a crunchy, post-hyphy beat, respectively.

The video opens with ALLBLACK and his companions capturing cube at the back of the bakery earlier than getting narced by ALLBLACK’s “cousin,” the bakery supervisor. He tells them that Drakeo is coming in later, so that they take over the shop, tying him to a chair and blasting ALLBLACK’s new music on the radio.

Unfortunately, the subsequent one who is available in is a masked robber, who tries to stay up the staff. When they uncover he has no gun inside his threatening paper bag, ALLBLACK decks him and turns into a hero. Meanwhile, Drakeo can also be being hailed as a hero elsewhere after rescuing a cat from a tree, receiving a key to the town at a press convention with a hating-ass superhero in attendance.

Kenny Beats makes a cameo in a separate scene, driving a purchasing cart down one of many Bay’s infamous hills with ALLBLACK as they’re pursued by an exasperated police officer.

“Ego” is the primary single from his upcoming debut album TY4FWM, which is due May 7 by way of his personal Play Runners label and distributed by Empire. Features will embrace E-40 (after all), G-Eazy (naturally), Mozzy (!), Sada Baby (!!), and Vince Staples (!!!).

Watch the “Ego” video above.