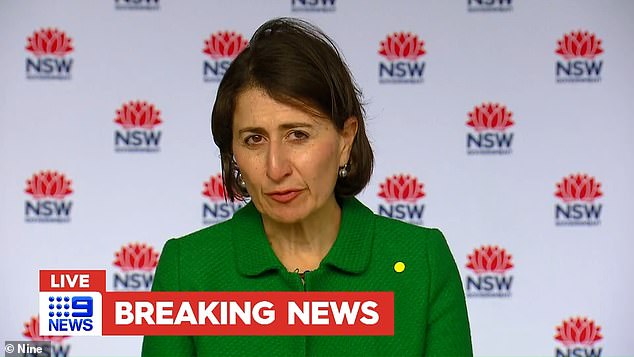 Gladys Berejiklian has admitted she is ‘upset and frustrated’ as anyone else in Sydney after being asked a question about the patient zero limo driver who infected the eastern suburbs.

When asked why the limousine driver – who contacted Covid after taking internatnational arrivals to hotel quarantine – wasn’t vaccinated, the NSW Premier said health officials are still investigating what occurred.

‘I am as upset and frustrated as anybody, we all worked so hard and it is really disappointing when things don’t go the way they should. I live and breathe it every day and I feel it intensely everyday,’ she said on Thursday.

‘We also rely on tens of thousands of outstanding people every day to do jobs that we would not do, to be in contact with people with the virus, so I want to continue to think, from the bottom of my heart, all those people who put themselves on the line every day.’

‘But I also want to say to those people in and around the system who think complacency is okay, it’s not okay. We know it and we feel it and we will get to the bottom of it.’

The number of locally acquired Covid cases in NSW linked to the Bondi cluster has grown to 36, after 11 new infections were announced – including a government minister.

NSW Health figures show there were 18 new cases in the 24 hours to 8pm on Wednesday, 13 of which were announced earlier.

There were another six cases detected after the 8pm cut off which will be included in Friday’s official tally.

This means there’s a total of 11 new cases reported on Thursday linked to the outbreak that began in Bondi last week.

Of the 11 new cases, all but one are linked to a known case or the Bondi cluster, with urgent investigations underway into how a man in his 40s caught the virus. He’s the second man in as many days who has contracted the virus from an unknown source.

One of the new overnight infections is NSW Agriculture Minister Adam Marshall, who confirmed on Thursday that he had tested positive after dining at a restaurant in Sydney’s east at the same time as a previously reported case linked to the Bondi cluster.

‘This morning just after 8am I was formally advised by NSW Health that I had returned a positive test for COVID-19,’ Mr Marshall said on Thursday.

‘I’m doing fine and will continue to strictly follow the advice of health authorities.

‘I have been in isolation in Sydney since late Tuesday night, when I received a text message from NSW Health.’

Mr Marshall has been isolating at his Sydney flat since Tuesday night and won’t be able to return to his Armidale home for at least 14 days. His ministerial staff are also in isolation.

He had dined with three of his Nationals colleagues -Trevor Khan, Steph Cooke and Ben Franklin – with all three understood to have tested negative.

The four MPs were in parliament on Tuesday afternoon after attending a partyroom meeting earlier in the day. 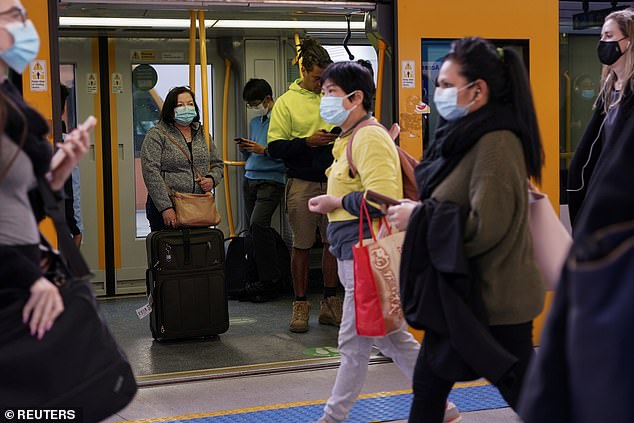 The number of locally acquired Covid cases in NSW linked to the Bondi cluster has grown to 36, after 11 new infections were announced – including a government minister 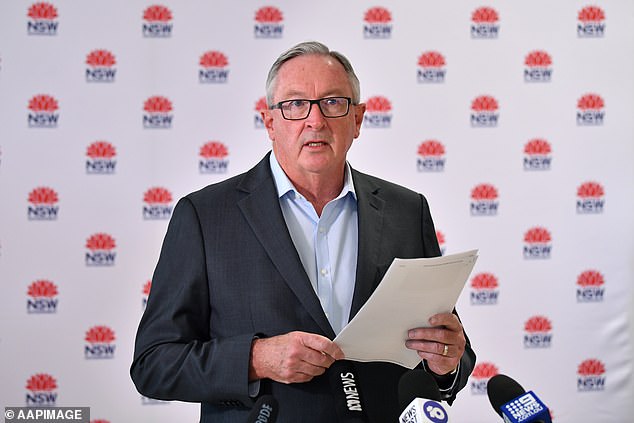 Parliament staffers have been told to stay home on Thursday, and MPs inside the Macquarie Street building are undergoing rapid COVID tests.

Government Whip Adam Crouch has instructed MPs to ‘stay put’ until they receive an update.

‘If you are not in Parliament House, remain where you are.’

Media and non-essential staff have been told to leave, and get tested.

Just 16 MPs are inside the NSW Parliament on Thursday – just enough to pass the 2021/22 budget handed down this week before the current session is suspended.

Meanwhile, Health Minister Brad Hazzard has tested negative and is out of isolation after being exposed to a potential case at parliament.

Mr Hazzard admitted it ‘was likely’ other MPs could be affected.