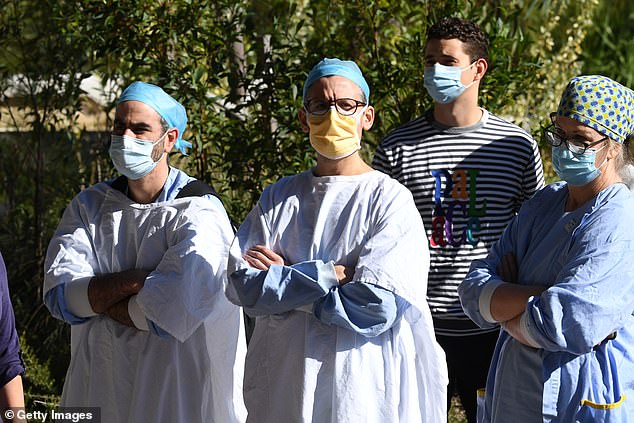 Australians who lose work due to Covid-19 lockdownscan now claim up to $600 a week after seven days.

Previously the Covid disaster payment allowed residents in a hotspot to claim $500 for each of the first two weeks and $600 from the third week of lockdown.

A $10,000 liquid assets test has been removed to allow anyone to access the payment regardless of how much they have saved.

Residents in a Commonwealth-defined hotspot who lose 20 hours a week can claim $600 and those who lose between eight and 20 hours can claim $375.

A 40 per cent wage subsidy scheme – announced in NSW on Tuesday – will also be offered to other states and territories after 14 days of lockdown.

The payment – funded equally by the state government and the Commonwealth – is 40 per cent of a company’s weekly wage bill, up to a maximum of $10,000 per week.

Companies must show their revenue is 30 per cent lower than an equivalent two week period in 2019 to qualify.

Prime Minster Scott Morrison announced the changes on Thursday afternoon, saying: ‘We think this is a more simple and streamlined set of financial supports for states and territories going forward, that may find themselves, hopefully not, in a situation where they would be in a period of lockdown.’

Mr Morrison also announced that telehealth – which allows patients to speak to GPs over the phone for free – would be temporarily restored for Covid-19 hotspots.

The Prime Minister said the 12.5 per cent of adults in Australia have been fully vaccinated as the rollout gradually ramps up.

A government survey released on Wednesday found that 73 per cent of Australians agreed or strongly agreed that they would get a Covid-19 vaccine when it becomes available and is recommended for them.

The June figure represented an increase of five per cent on May’s 68 per cent.

What are the main financial supports available in lockdown?

Residents in a Commonwealth-defined hotspot who lose 20 hours a week can claim $600 and those who lose between eight and 20 hours can claim $375.

* A new business support payment will also be available to entities with an annual turnover between $75,000 and $50 million who can demonstrate a 30 per cent decline in turnover.

* To receive the payment, eligible entities will be required to maintain their full time, part time and long term casual staffing level as of July 13.

* Eligible entities, which includes not-for-profits, will receive payments of between $1500 and $10,000 per week based on the level of their payroll.

* For non-employing businesses, such as sole traders, the payment will be set at $1,000 per week.