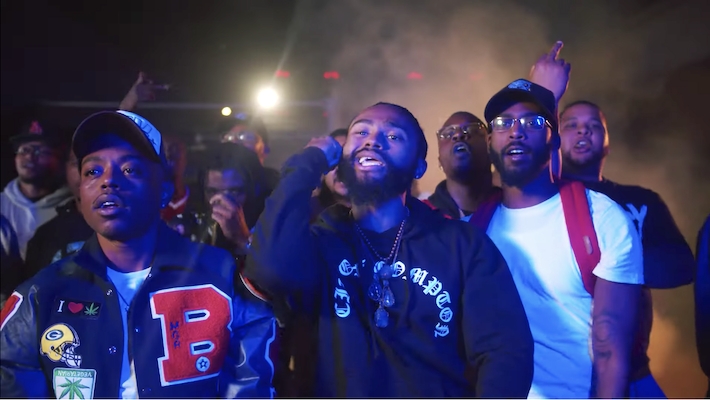 Courtney Bell is an up-and-coming rapper from Detroit whose gift for witty wordsmithing in singles like “Say You Wanna” and “Ice” has put him on the radars of traditional rap fans this year and garnered him a respectable following for a rapper without an official album out yet. Bell’s talent has secured a trustworthy cosign from Compton’s Boogie on his latest single, “Lion’s Den,” ensuring that his underground credibility and profile will grow before too much longer.

The song’s lyrics find the conscious-minded Bell and the street-centric Boogie taking on a topic that’s been at the forefront of the news cycle throughout 2020: The ongoing pattern of racially-motivate police brutality that has turned so many Black people’s names into hashtags and reasons for protest. Drawing on his religious beliefs, Bell defies the conditions that oppress Black people, while Boogie maintains “my heart is not on auction.”

In the video, the duo and their crew surround and bully a police officer who pointed his gun at them, hammering home the idea that officers are meant to protect and serve the people, who should hold more power than them. It ends with a list of names of people killed by police in recent years, including Eric Garner, John Crawford III, Breonna Taylor, and more.

Although it’s been a relatively quiet year for Boogie, who is billed to appear on LVRN’s Home For The Holidays Christmas album later this year, he did have appearances on Reason’s “Trapped In” and Guapdad 4000’s “Hairless Horseman.”

Watch the “Lion’s Den” video above.

Economy bounced back by 15.5% in three months to September