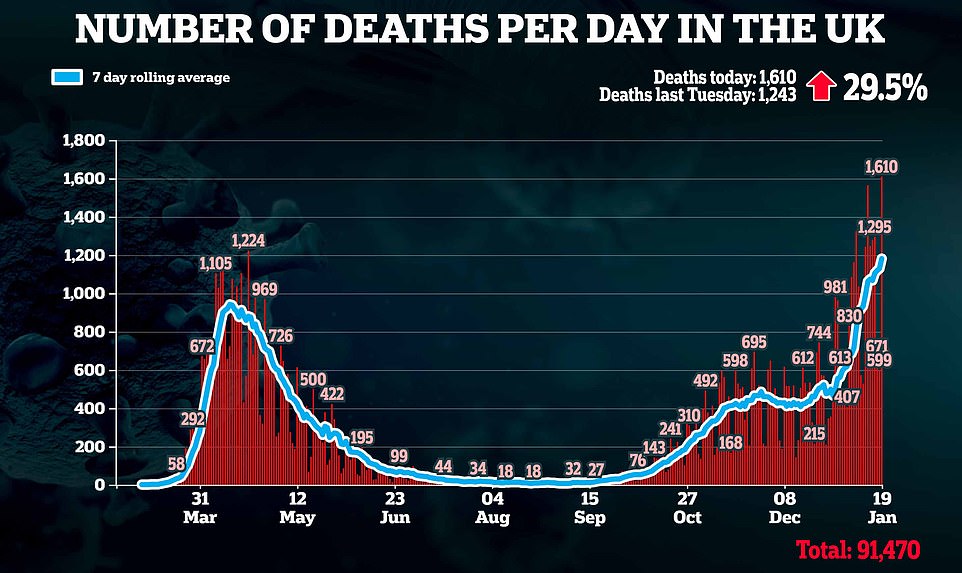 Britain today announced a record 1,610 new coronavirus deaths in the country’s deadliest day of the pandemic — but infections are down by a quarter as the third lockdown starts to drive down the infection rate.

Today’s grisly death toll marks a sharp 30 per cent rise on the 1,243 announced last Tuesday and nearly the double the number of victims a fortnight ago, when there were 860.

It’s the third time in a month that Britain has recorded a record number of daily fatalities, as the nation battles with the super-infectious Kent strain and hospitals juggle winter pressures. The darkest day in the pandemic prior to today was January 13, when the virus killed 1,564 people in a single 24-hour period.

But, in another sign that the national shutdown is taking effect, there were 33,355 new infections announced today, down 27 per cent on the 45,533 last Tuesday and 45 per cent lower than the 60,916 two weeks prior.

Fatalities lag by a few weeks behind infections due to the time it takes between catching and falling seriously ill with Covid. It means the effects of January 4 shutdown might not be felt in the death figures until next week.

It comes as official data showed one in eight people in England — around 5.4million — had already had by December last year, with experts claiming the disease was ‘much more widespread than previously realised’.

And Nicola Sturgeon today declared that lockdown in Scotland will be extended to mid-February despite signs cases have flattened off. Dashing hopes of a loosening from the end of this month, the First Minister said she was being ‘cautious’ and more evidence was needed that the outbreak was on a ‘downward trajectory’. 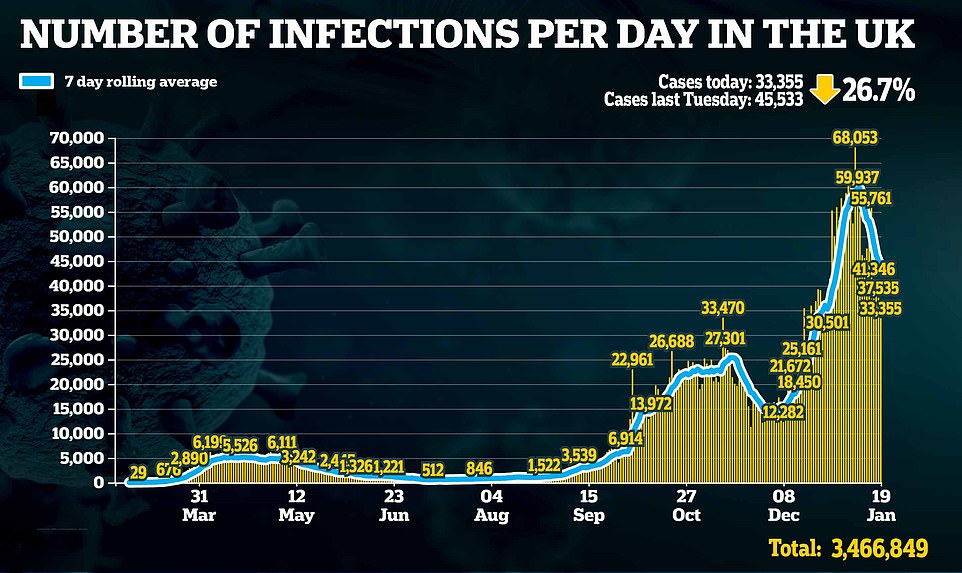 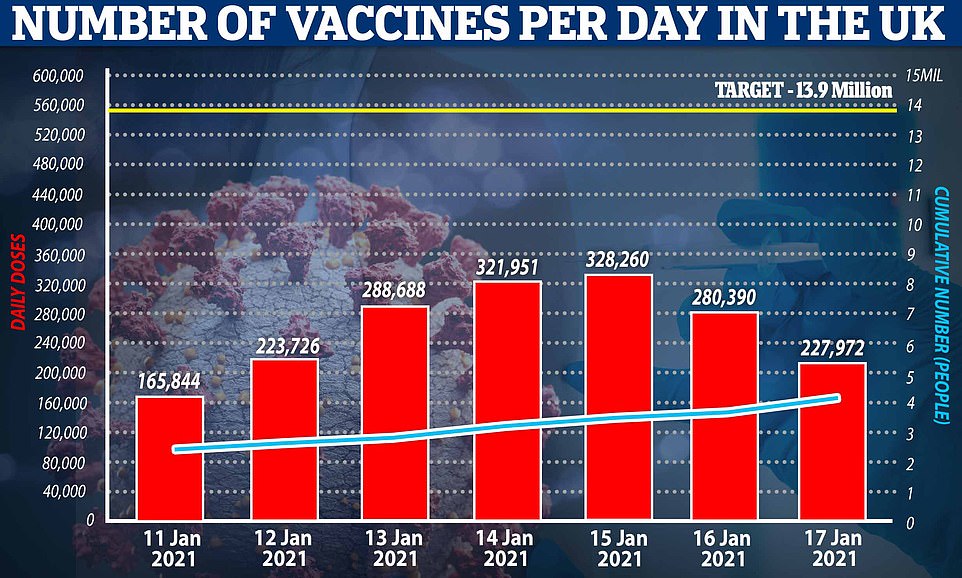 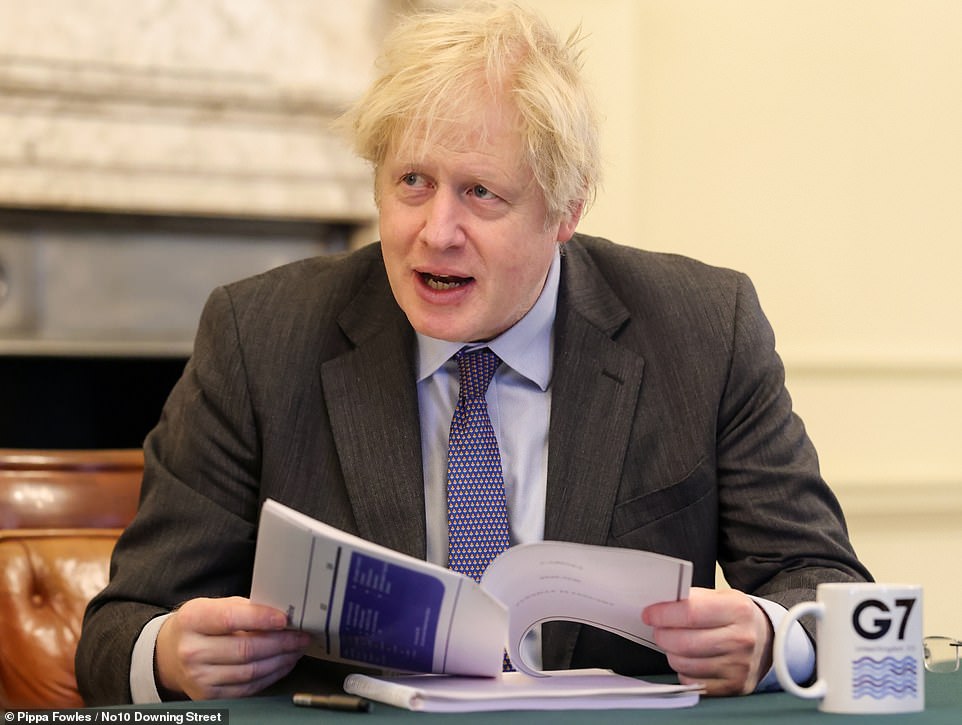 Scotland’s announcement came amid fears the brutal curbs in England will need to stay in place past March, with Boris Johnson saying the situation remains ‘serious’ despite infections dropping off and progress on vaccinations.

There are claims that ministers are braced for the national lockdown to stay until the beginning of April even if the innoculation drive goes without a hitch, while school chiefs have suggested that is the most realistic timetable for getting children back in classrooms.

The whole Scottish mainland and several islands have been under tough restrictions since early January, with schools closed and a ‘stay at home’ message in force.

It was initially due to run until February, but was reviewed by Ms Sturgeon and her ministers this morning.

Speaking in the Scottish Parliament this afternoon, Ms Sturgeon said: ‘We need to see these trends continue, to be more certain that this phase of the epidemic is now on a downward trajectory.

‘And second, we need to be realistic that any improvement we are seeing is down, at this stage, to the fact that we are staying at home and reducing our interactions.

‘Any relaxation of lockdown while case numbers, even though they might be declining, nevertheless remain very high, could quickly send the situation into reverse.’

She said: ‘It is for all these reasons that the Cabinet decided this morning to maintain the restrictions which are currently in place.

‘That means that the lockdown restrictions – including the strict stay-at-home requirement – will remain in place across mainland Scotland and some island communities until at least the middle of February.’

Ms Sturgeon did give some grounds for optimism, saying the curbs did seem to be working.

She said: ‘We believe that the lockdown restrictions – and the sacrifices everyone continues to make – are beginning to have an impact.

‘Case numbers – which had been rising rapidly – appear to have stabilised and even declined.

‘In the week to January 14, there was an average of around 1,900 confirmed new cases per day. This is an 18 per cent reduction on the previous week.

‘Test positivity has also declined slightly, as has the number of cases per 100,000 of the population.’

Meanwhile, Mr Johnson gathered his Cabinet this morning to take stock of the crisis in England.

He told ministers that ‘although we are beginning to see a decline in infection rates, the situation remains very serious and it remains as important as ever for people to follow the guidance to continue to suppress the spread of the virus’.

The PM has promised that the lockdown will be reviewed on February 15, after vowing that the 14million most vulnerable Britons will have had their first dose of vaccine by then.

But ministers have made clear that it will be weeks after that before the jabs are fully effective, and health experts have cautioned that pressure on the NHS will still be huge.

The government has set criteria including deaths falling, the NHS being able to cope, the vaccine rollout making progress, and no dangerous new variants for easing lockdown.

Schools have warned they do not expect to return to normal until April.

Mr Johnson has also dismissed Tory calls for a ‘route map’ for lifting the curbs before mid-February, warning that is the earliest any plan will become clear.