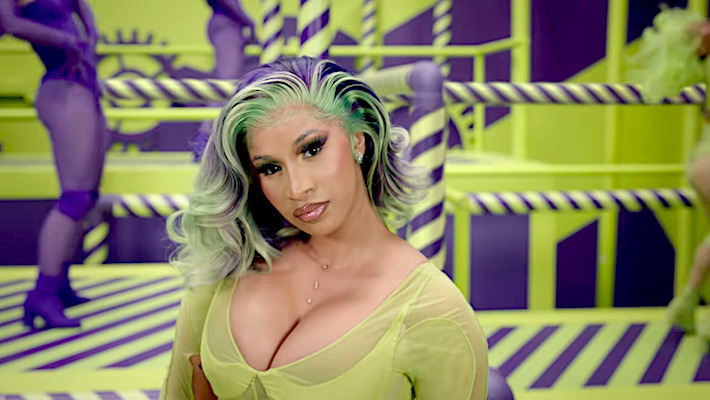 Tuesday was a normal one for Cardi B…until the rapper accidentally shared a topless photo of herself to her Instagram story. While the image did not remain on her Instagram story for long, a few people were able to catch a glimpse of the post, resulting in the image being shared all around social media. That’s when her fans came to the rescue, expressing solidarity by launching a racy new hashtag, #BoobsOutForCardi,” in which they posted topless photos of their own.

Cardi expressed her frustration at the accidental post over Twitter, but decided to go about her day, and not let the mistake haunt her. After all, she pointed out, it’s not the first time this has happened to her. “I’m going to eat my breakfast, and then I’m going to go to a party because I’m not even going to think about it. I am not going to think about it, ok? Nope, no I’m not. I’m not,” she said in a voice message left over the social media site. “It is what it is. Sh*t happens. F*ck it, it’s not even the first time. I mean, I used to f*cking be a stripper so whatever. Ay, Dios mío.”

Cardi is the latest celebrity to mistakenly post a private picture of themselves. Last month, actor Chris Evans accidentally shared another body part online, to the amusement of many.

Cardi B tweeted a voice memo to address the topless picture she accidentally posted to her Instagram Stories.

The 28-year-old is in the midst of several days of whirlwind birthday festivities and during all the fun she leaked the picture by mistake on Tuesday.

‘Ah, Lord. Lord, why the f*** did you have to make me so f***ing stupid and retarded? Why? Why, why why?’ she sighed on her Twitter voice message hours later.+11

‘It is what it is’: Cardi B tweeted a voice memo Tuesday to address the topless picture she accidentally posted to her Insta Stories 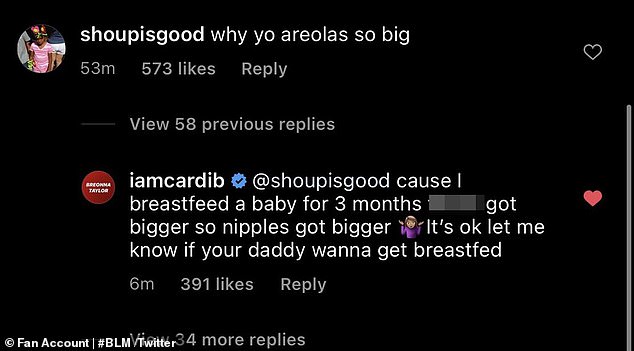 Giving as good as she gets: When an Instagram commenter saw the photo and asked: ‘why yo areolas so big’ she offered a cheeky reply captured in a screen-grab by a fan account

When an Instagram commenter saw the photo and asked: ‘why yo areolas so big’ she replied cheekily: ’cause i breastfeed a baby for 3 months t**ties got bigger so nipples got bigger [shrug] It’s ok let me know if your daddy wanna get breastfed.’ The exchange was captured in a screen-grab by a fan account.

The Bodak Yellow hitmaker has been surrounded by loved ones amid her raucous birthday celebrations with little evidence of masks and social distancing.

Cardi’s celebrity guests included her WAP duet partner Megan Thee Stallion, as well as Kylie Jenner who had a cameo in their music video.

Her multiple parties, which have been going on since the weekend, have whisked the rap diva from Las Vegas to Atlanta.

Desmond Elliot apologises for addressing the youths as “Children”