BREAKING NEWS: Man is shot dead on a suburban street in Sydney’s south-west – with riot police swarming the area in the hunt for his killer

A man has been shot dead in Sydney’s southwest, with riot police swarming the area in the hunt for his killer.

The incident occurred about 7.30am Monday on Simmat Avenue, in Condell Park.

The victim suffered multiple gunshot wounds and paramedics rushed to the scene, but could not save him.

Officers from Bankstown Police Area Command have set up a crime scene and launched an investigation with assistance from the Homicide Squad.

Emergency services rushed to Simmat Avenue, in Condell Park, after a man was fatally shot about 7.30am Monday

Simmat Avenue and Curtin Place are closed in both directions, with local diversions in place.

Police are advising the community to avoid the area.

A local woman told Daily Mail Australia she awoke to the sound of gun fire.

‘I heard about five gun shots at about 7.30 then about 15 minutes later heaps of sirens,’ she said.

‘There were riot trucks driving up and down the street and a police helicopter.’

Anyone with information about this incident is urged to contact Crime Stoppers: 1800 333 000. 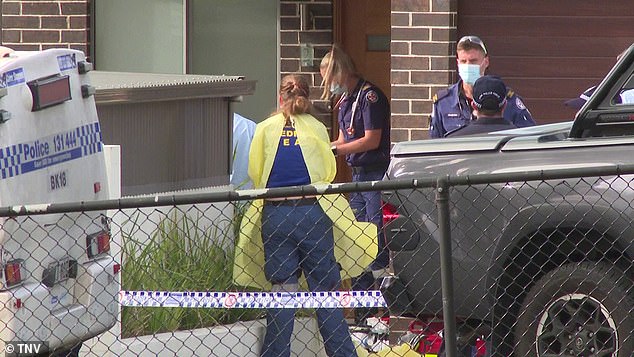 Riot teams swarmed the area, with Simmat Avenue and Curtin Place closed in both direction