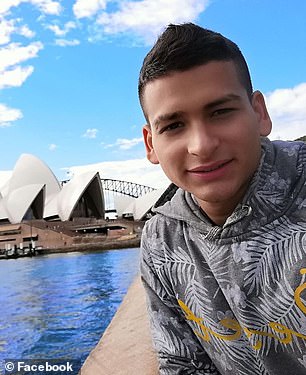 EXCLUSIVE: ‘Baby-faced’ Colombian man, 20, returns to Sydney to face charges over the death of a Coogee sex worker and author, 69, – having spent the last eight months in a jail cell in the Caribbean because of COVID-19

A Colombian student arrested overseas over the death of a sex worker has returned to Sydney and will today be charged with her murder.

Hector Enrique Valencia, 20, was nabbed by local authorities in the Caribbean island of Aruba in March over the death of Coogee identity Kimberley McRae.

The 69-year-old transgender woman’s body was found inside her apartment on Mount Street, in Sydney’s eastern suburbs, on January 14.

Due to the COVID-19 pandemic and its impact on international travel, Valencia has remained in custody in Arbua for the last eight months.

But on Tuesday morning he returned to Sydney on a flight and is currently inside Surry Hills Police Station where he is expected to be charged on an outstanding warrant for murder.

Valencia is expected to face a Sydney court via video link later today.