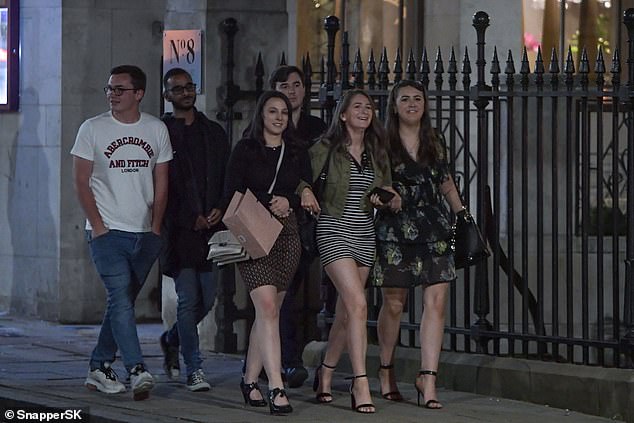 Covid-19 cases among people in their 20s have started to fall for the first time in 10 weeks, Public Health England data shows.

Those in the 20-29 age group still have the highest infection rate of anyone in the country but the number of cases per 100,000 people dropped in the second week of September.

The only other age group that saw a drop in its case rate was the over-80s, among whom it dropped from 20.6 to 19.8. In all other age groups infections kept rising.

Government officials have pointed the finger at young people in recent weeks for driving infections back up by spreading coronavirus at social events, gathering in larger-than-allowed groups and hosting parties in ignorance of social distancing.

PHE’s report also showed that outbreaks of coughs and chest infections – some of which will be Covid-19 – are skyrocketing in schools, offices and care homes.

‘Acute respiratory infections’ rose five-fold in care homes in the week to September 13 and increase more than eight times in schools after term resumed in England.

Data shows that coronavirus infections in people in their 20s fell for the first time in 10 weeks recently (Pictured: Young people out in Birmingham yesterday, Thursday September 17)

Coronavirus infections among young people are not a huge cause for concern themselves, scientists say, because they are not likely to lead to serious illness.

The disease is generally worst for people over the age of 50, and those with serious health problems such as diabetes, while most of the deaths have been in the elderly.

But the biggest worry about young people catching the virus and spreading it is that they keep it circulating and inevitably pass it on to their parents and grandparents.

Prime Minister Boris Johnson even held the first Downing Street conference in weeks to tell under-30s to consider their behaviour ‘for the sake of your parents’ and your grandparents’ health’.

Data tentatively suggests the message may have got through, although it was only a small fall and does not yet represent a downward trend.

Cases are still rising in teenagers and younger children, which is likely accelerated by the fact that they have returned to school.

Professor Chris Whitty, England’s chief medical officer, said at a Downing Street briefing this month that while cases among older people and children remained ‘flat’, in other age groups there were ‘rapid upticks’.

He said among 17 to 18 year-olds and 19 to 21 year-olds the numbers had gone up ‘really quite steeply’ since mid August.

These are a measure of how often different settings are recording outbreaks of more than two people coming down with a cough or chest infection.

They are not all explicitly caused by coronavirus but judged by similar symptoms and included in the Covid-19 report.

The number of these outbreaks has skyrocketed in recent weeks, with a total of 729 across all settings in the week ending September 13, up from just 246 the week before.

In schools – which have resumed classes after a lengthy lockdown and summer – the number of coughing outbreaks shot up from 23 to 193 in a week.

The increase in outbreaks come as statistics across the board show that Covid-19 infections are rebounding.

Another 4,322 people have been diagnosed with Covid-19 today in the highest one-day rise since May 8, as a raft of worrying statistics revealed the Covid-19 crisis appears to be rebounding.

Data from the Office for National Statistics estimates 6,000 people are catching the life-threatening illness every day in England while hospital admissions have doubled in a week and government scientists warn the R rate could now be as high as 1.4.

Professor Kevin McConway, a statistician at The Open University, said: ‘This is undoubtedly concerning, and particularly so when we take into account that the data behind these estimates come from several sources, many of which – such as hospital admissions, admissions to intensive care, and deaths – lag behind the growth in new infections, because it takes time for people to become ill enough to require hospital treatment or, sadly, to die.

‘So the estimates cannot take into account very recent changes in the patterns of new infections.’

September’s normal increase in coughs and colds caused by schools going back is causing ‘utter chaos’ in the UK because people are terrified of Covid-19, according to a top scientist.

Professor Carl Heneghan, an evidence-based medicine expert at the University of Oxford, today vented his frustration about the ‘panic’ being stirred up over the coronavirus crisis.

Meeting with MPs on Parliament’s Science and Technology Committee, he insisted coughs and colds spike every September when children head back to class, and become even more common during the winter.

But Government messaging about the deadly consequences of Covid-19 and forcing entire towns and regions into lockdown – rules that now cover 9.2million people – have left members of the public ‘fearful’ and ‘terrorised’.

He said there has been a 50 per cent increase in reports from family doctors seeing patients with chest infections that have the same symptoms as the coronavirus. 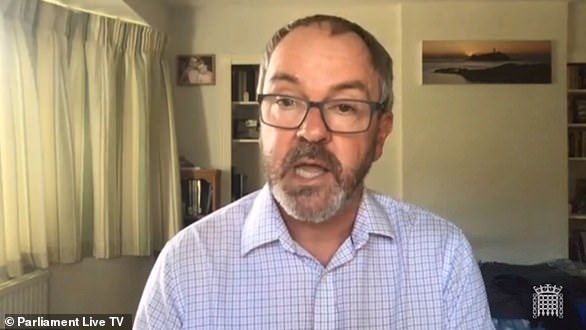 The numbers of people going to doctors with chest infections can be seen starting to rise sharply in September, and the annual average (dotted line) shows that it spikes every year, even before coronavirus

The same is true of lower respiratory infections, which also cause coughs and breathing difficulties

‘Keeping our children in school is important but at the moment it is utter chaos because of the 50 per cent increase in other respiratory pathogens that mimic Covid in children,’ Professor Heneghan said.

He refers to illnesses that produce similar symptoms to Covid-19, which are usually viral infections referred to as respiratory tract infections, or chest infections.

Cases of these spike every winter because people spend more time indoors close together, and coughs and sneezes spread them easily.

And they are rising now, Professor Heneghan pointed out, because children are returning to school and mixing more with others every day. This would happen regardless of the Covid-19 outbreak.