Governor Andrew Cuomo is threatening to withhold a COVID-19 vaccine from New York until his team of doctors deem it safe because he doesn’t trust the FDA or CDC, raising serious questions about how and when it will eventually become available and who will be the arbiter of it.

Cuomo said during an interview with Good Morning America that the American people will be ‘skeptical’ about a vaccine because of how the federal administration has handled the pandemic and that he won’t rush to recommend it.

It’s unclear if, once the FDA approves it, Cuomo will have the power to stop it from being administered across the state.

But in a lengthy vaccine administration plan that his office released on Sunday, he says he will consult a ‘task force’ of his own doctors about it and, if necessary, withhold it.

‘The Task Force will advise on the vaccine safety profile, legal authority to withhold vaccine, and clinical best practices if New York State must withhold or pause distribution of the vaccine.

‘Once New York’s independent Clinical Advisory Task Force has advised that a COVID-19 vaccine is safe and effective, the vaccine will be distributed and administered throughout New York State,’ the plan reads.

He also appeared on GMA to talk about the vaccine and his doubts that it will be safe.

‘I’m not that confident [in the CDC] but my opinion doesn’t matter.

‘You’re going to say, “here’s a vaccine it was new, done quickly but trust this administration that it’s safe?”

‘I think it’s going to be a very skeptical American public and they should be.

‘We’re going to put together our own group of medical experts to review the vaccine and if they say it’s safe I will go to the people of New York and say it’s safe.

‘But I believe all across the country, you’re going to need someone other than this FDA and CDC saying it’s safe,’ Cuomo said.

Cuomo and Trump have butted heads at nearly every turn since March.

The President has repeatedly criticized Cuomo’s decision to send recovering COVID-19 patients back into nursing homes, a move that led to thousands of deaths, and says he kept the state closed for too long, harming businesses and denying people their right to work.

Cuomo, on the other hand, continues to boast about how he handled New York’s crisis by driving the numbers down.

He is now touting a book about his pandemic response and is calling it ‘Lessons in Leadership’.

His ‘task force’ of doctors is made up of seven New York doctors, some of whom are academics and some are practicing physicians.

The head of the group is Charles M. Rice, a Rockefeller University scholar and Nobel Prize laureate who researches Hepatitis C. 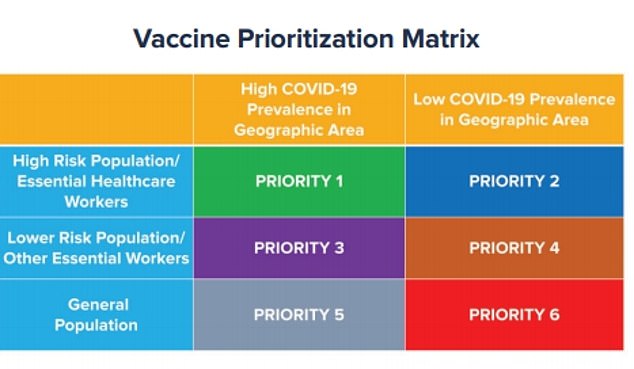 Cuomo will roll out the vaccine gradually to people once it does become available. The last to get it will be the general population in areas where there are few cases

Cuomo has not explained what makes them more qualified to comment on the safety of a vaccine than Dr. Fauci, the head of the CDC and the nation’s most authoritative COVID-19 voice.

The first to receive the vaccine will be healthcare workers, nursing home workers and the most at-risk patients in high-risk areas. 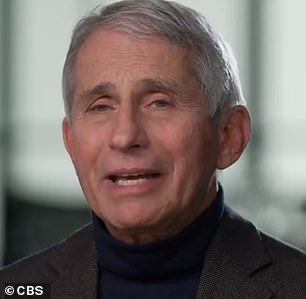 Then, teachers and first responders will get it.

Next, he’ll give it to grocery store workers, pharmacists and transit employees.

The fourth group will be people over the age of 65 and then it will become available to the wider public.

It remains unclear where people will be able to go for the vaccine or if any private healthcare companies will dish out their own doses for a fee.

Cuomo and other governors penned a letter to Trump over the weekend asking for more information and how vaccines will be administered.

Dr. Fauci said last week that he expects there will be enough COVID-19 vaccines for the general public in April next year.

But the three front-running trials – Johnson & Johnson’s, AstraZeneca’s and Inovio’s – have all been paused for safety concerns.

It’s unclear when they will start back up again.

A recent poll by Pew Research also found that as many as half of Americans would not take a vaccine when it becomes available because they feel it is a ‘PR stunt’.