Travel bans could be introduced to stop people coming into Scotland from coronavirus hotspots in other parts of the UK.

Nicola Sturgeon yesterday confirmed that she wants to stop cross-Border travel from regions that have the highest Covid-19 rates to those with a lower prevalence.

The Scottish First Minister also backed a controversial move by the Welsh Government to threaten people from high-risk parts of Scotland and England with fines if they travel there.

The initial fines in Wales will be £50 but these could rise if someone does not leave.

Miss Sturgeon said she wants all parts of the UK to restrict travel from areas with the highest number of cases, as she warned Scots not to travel to or from hotspots inside the country, mainly around the Central Belt where cases are soaring. 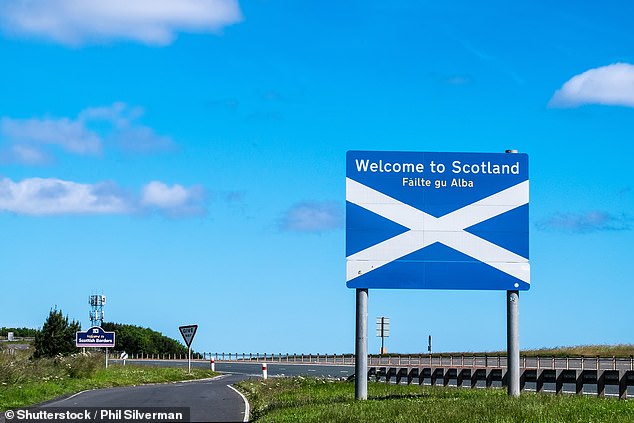 She added: ‘The First Minister of Wales is seeking agreement between the four UK nations on travel restrictions where necessary from high prevalence areas in one UK nation to lower prevalence in others.

‘I want to be clear today that I back the calls from the First Minister of Wales and I’ll be writing to the Prime Minister today to seek urgent talks on that issue.

‘If we think putting formal travel restrictions in place is necessary, we will do that. I don’t rule that out – I don’t rule anything out. But obviously the police can’t stop everyone on the roads to check whether they are travelling for essential purposes.’

Miss Sturgeon was reported to have asked for urgent legal advice on whether a cross-Border travel ban can be introduced. 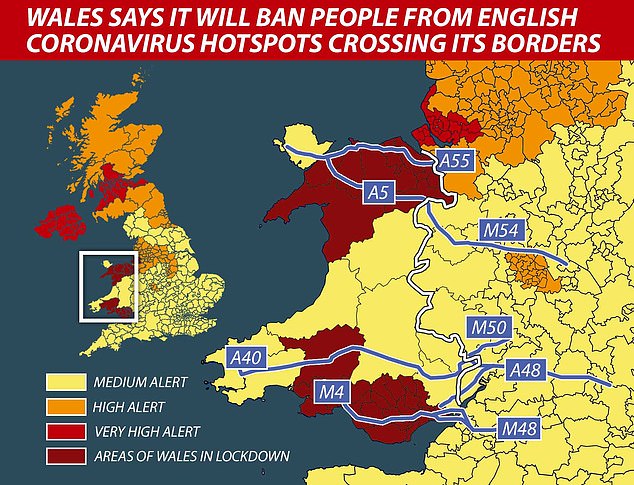 And this morning, the SNP’s Westminster leader said Scotland could implement measures to prevent non-essential travel from coronavirus hotspots.

‘What we can do, if necessary, is say that people should not travel from hotspots, whether they should be from in Scotland or people coming to Scotland from other parts of the United Kingdom.

‘But that will be done on an evidence-based approach where we think it’s appropriate to protect the people in all parts of the country from people travelling where it’s not necessary.

‘When people have to travel for business, for work, and so on – essential journeys – they will still be allowed, but what we’re talking about is non-essential journeys, where it’s appropriate to do that.’ 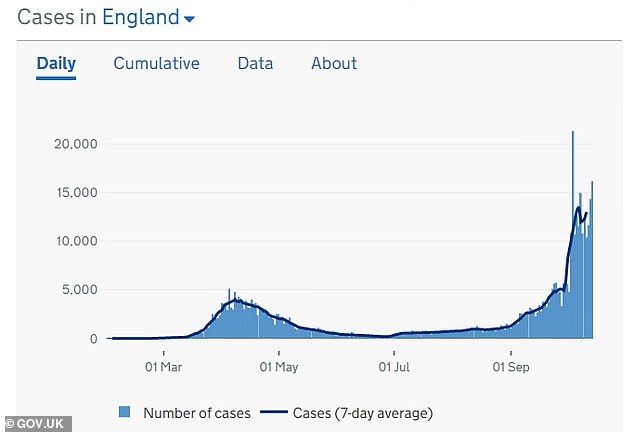 The cases by date reported are shown above and below for the four UK Nations. It shows the number of individuals who have had at least one lab-confirmed positive Covid-19 test result 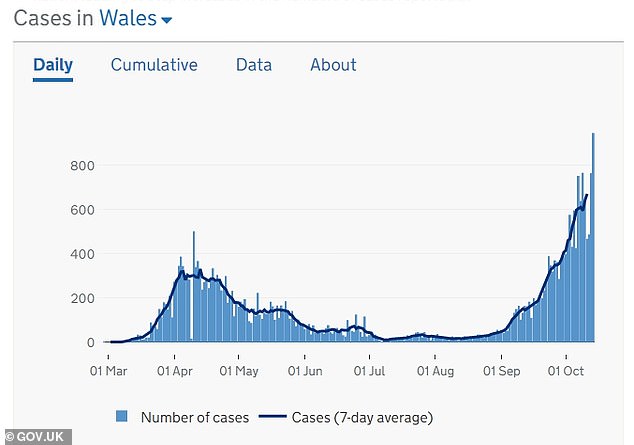 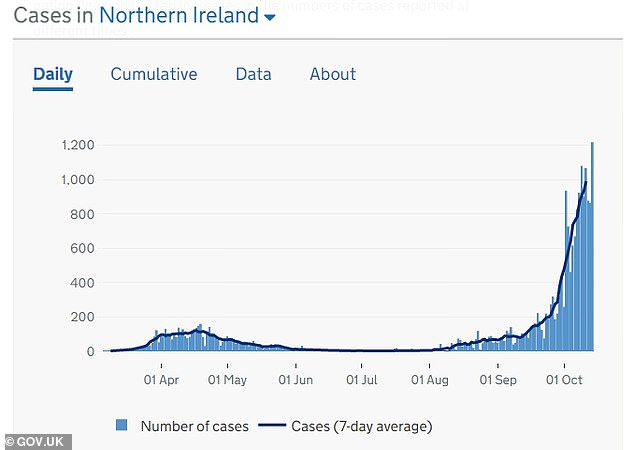 Yesterday, Welsh First Minister Mark Drakeford said people from other parts of the UK would be hit with fines if they travelled to Wales from places such as Liverpool, which is in the top tier of highest risk parts of England.

Mr Drakeford said Wales would ban entry to people from areas of the UK with high levels of coronavirus by Friday if Boris Johnson fails to impose UK-wide travel restrictions.

He told the Welsh parliament he had asked for work on the travel ban to be brought forward after Mr Johnson failed to reply to two letters requesting he introduce the measure across the UK.

On social media, Mr Drakeford said he was preparing new regulations ‘to protect the health of the people of Wales’.

Responding to his message on Twitter, Miss Sturgeon said she ‘fully supports’ the move. She added: ‘These are public health decisions and nothing to do with constitutional or political debates.

‘The Scottish Government will also take whatever action we consider necessary to control Covid.’

Asked if she was taking legal advice on the plan, a Scottish Government spokesman pointed to Miss Sturgeon’s Twitter message.

Miss Sturgeon also advised against non-essential travel to the parts of England rated as high or very high alert areas.

This includes Liverpool, Manchester, Lancashire, West and South Yorkshire, Northumberland, Tyne and Wear and Nottinghamshire and the West Midlands.

People who live in the five Central Belt health board areas which have the toughest circuit breaker restrictions in force have already been advised to avoid non-essential travel, while people in other parts of Scotland have been urged not to visit unless they need to.

Miss Sturgeon said she opted against mandatory travel restrictions ‘at this stage’ but said people should not travel if they don’t have to. 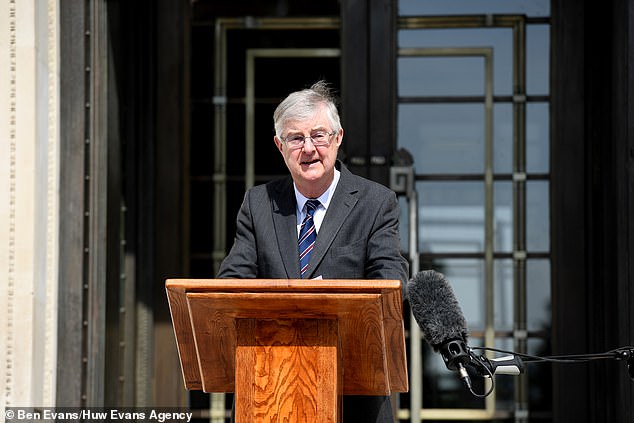 The First Minister added: ‘We are currently advising against non-essential travel to the parts of England which are classed as very high or high alert areas under England’s new three tier system. And I’m asking people from these areas not to travel to Scotland either.

‘Several of these areas are seeing even higher levels of infection than we are seeing in central Scotland and we will make sure we keep the information on which areas are covered by this guidance updated on the Government website.’

She said she had thought carefully about whether to have a mandatory travel restriction in the five Central Belt health board areas last week but decided against it ‘at this stage’.

She added: ‘We decided not to say to people if you have got an October break booked you have to cancel it, to allow people to go but to be very careful.

‘But if you don’t yet have a break booked, or if it is an option not to go, my advice would be to not travel if you don’t have to.

‘Because then you are minimising the risk of getting the virus in a place you go to or perhaps inadvertently and unknowingly taking it there or bringing it back.’

Kane Brown, Swae Lee, And Khalid Perform ‘Be Like That’ At The BBMAs