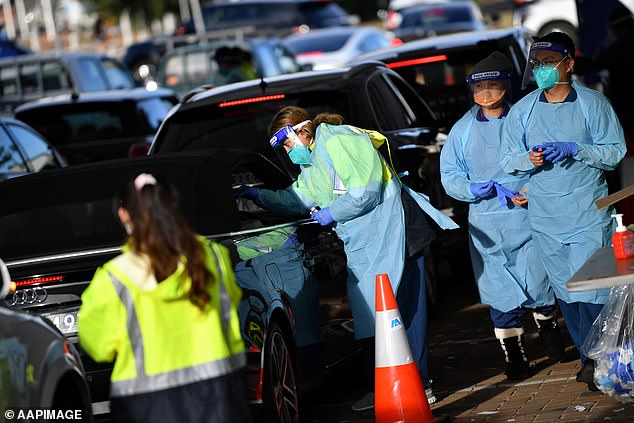 Victoria has slammed its border shut to millions living in Sydney starting at 1am on Wednesday.

The state has branded the City of Sydney and six other suburbs as ‘red zones’, meaning travel across the border is banned.

Those who have been to one of the ‘red zones’ and live in Victoria must self-isolate immediately for 14 days.

Victoria has slammed its border shut to millions living in Sydney starting at 1am on Wednesday. Pictured: Cars line up for Covid-19 testing at Bondi in Sydney, Tuesday, June 22, 2021 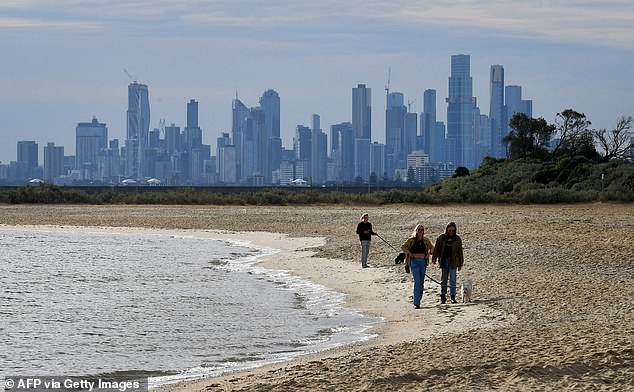 The state has branded the City of Sydney and six other suburbs as ‘red zones’, meaning travel across the border is banned (Melbourne as seen from St Kilda Beach on Tuesday)

Of the 10 new infections announced in NSW today, one of them remains a mystery.

A student at Saint Charles’ Primary School in Waverley, Sydney’s east, returned a positive result but contact tracers are still scrambling to find out where she may have contracted the virus.

The current outbreak hitting Sydney is particularly hard to trace because it is the highly infectious Delta variant which originated in India.

‘Literally people not even physically touching each other but fleetingly coming into the same airspace has seen the virus transfer from one person to another,’ Premier Gladys Berejiklian said.

‘That’s how contagious it is.’

Under the Andrew’s government’s traffic light system, any Victorian resident who has been in an area declared a red zone must obtain a permit to re-enter the state and will be required to undergo 14 days of home quarantine.

Non Victorian residents are banned all together – but some exceptions can be made if a person has only transited through a red zone.

Anyone who enters Victoria without a permit ‘you will be sent back,’ the Victoria department of health warned.

‘If you enter at an airport or seaport from a red zone without a permit, you will be fined and will stay in Hotel Quarantine until return transport is arranged.’

Moments before the ban was announced New Zealand declared it was also putting a halt to quarantine-free travel from NSW, giving Kiwis just three hours to get back home before restrictions come into place at 10pm (AEST).

It came as NSW Health issued an urgent alert for a busy Qantas flight after a passenger infected with Covid enjoyed a weekend away in New Zealand.

Earlier tonight it was revealed the infected Australian hopped on flight QF163 from Sydney to Wellington at 12.12am on June 18.

They returned to Sydney on Air New Zealand flight NZ247 at 10.13am on June 21 – just hours before Prime Minister Jacinda Ardern slammed the nation’s borders shut.

NSW health authorities were already on edge after Covid fragments were found in sewage from 15 suburbs where 22,500 Sydneysiders live and even more venues are added to the city’s swelling exposure list.

The ANZ bank in Martin Place was also added, along with two more shops in Bondi Junction – Chanel fragrance and beauty on level four of the shopping centre, and Starbucks on level 2.

The eastern suburbs shopping mall has been at the heart of Sydney’s latest outbreak, which swelled to 21 on Tuesday.

Staycations: The UK holiday hotspots where there are still vacancies in July and August