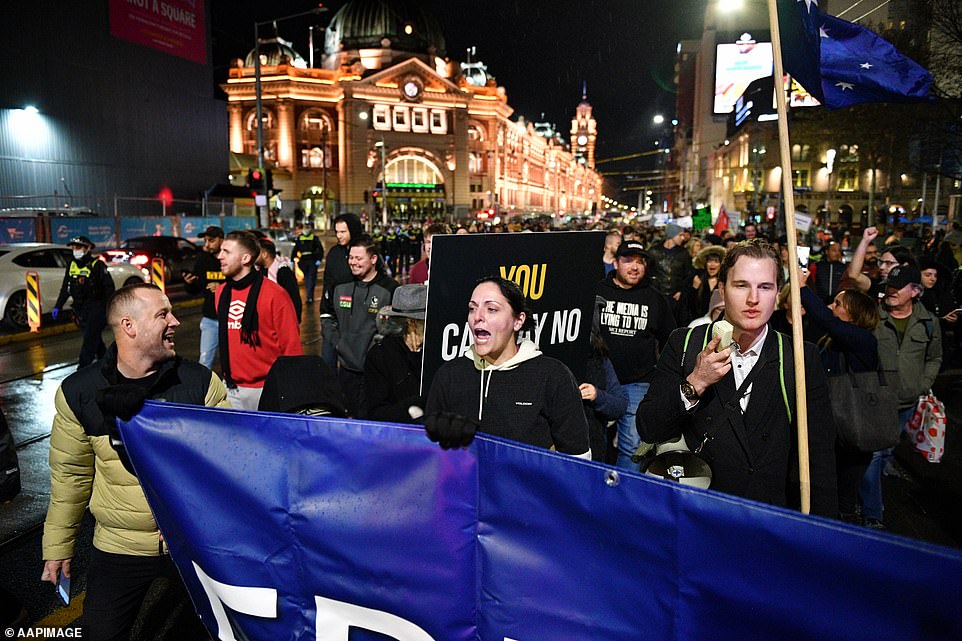 Hundreds of protestors have stormed Melbourne‘s CBD to rally against the looming five-day lockdown coming into force across Victoria from midnight.

Premier Daniel Andrews on Thursday said Victoria had ‘no choice’ but to enter a snap statewide lockdown to contain a growing outbreak of the COVID-19 Delta variant.

The decision came after the state recorded two new cases, bringing the cluster to 18, which was sparked when NSW‘s outbreak was imported into Melbourne by a Sydney removalist working interstate.

But hundreds of angry residents did not agree with the premier, demanding he be sacked for plunging the state into its fifth lockdown.

Hundreds of protestors swarmed Melbourne’s CBD on Thursday to rally against Victoria’s fifth lockdown, coming into effect from midnight 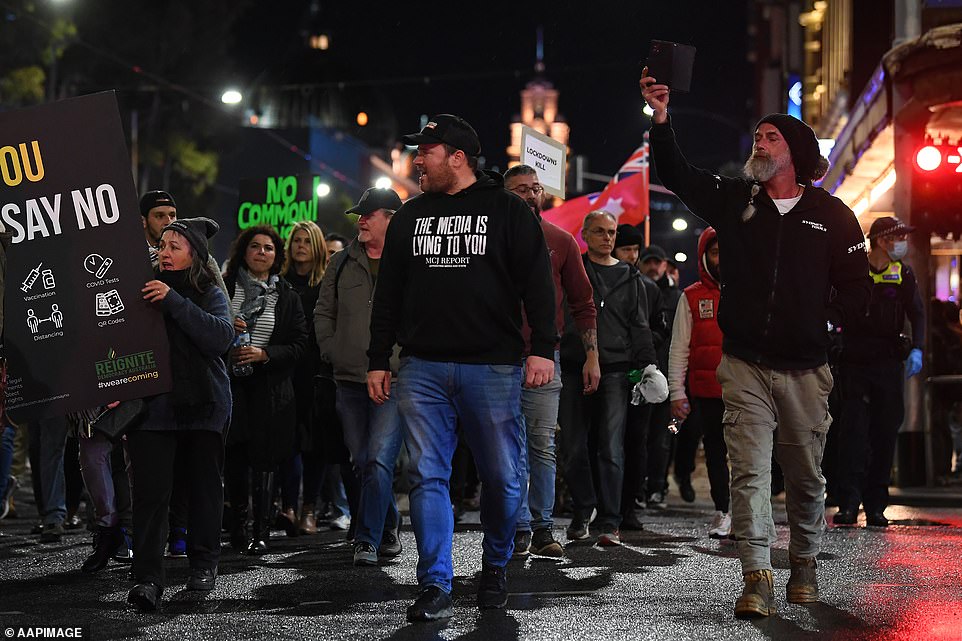 Angry residents packed together as they chanted and held up signs, with some spouting claims the pandemic was not real 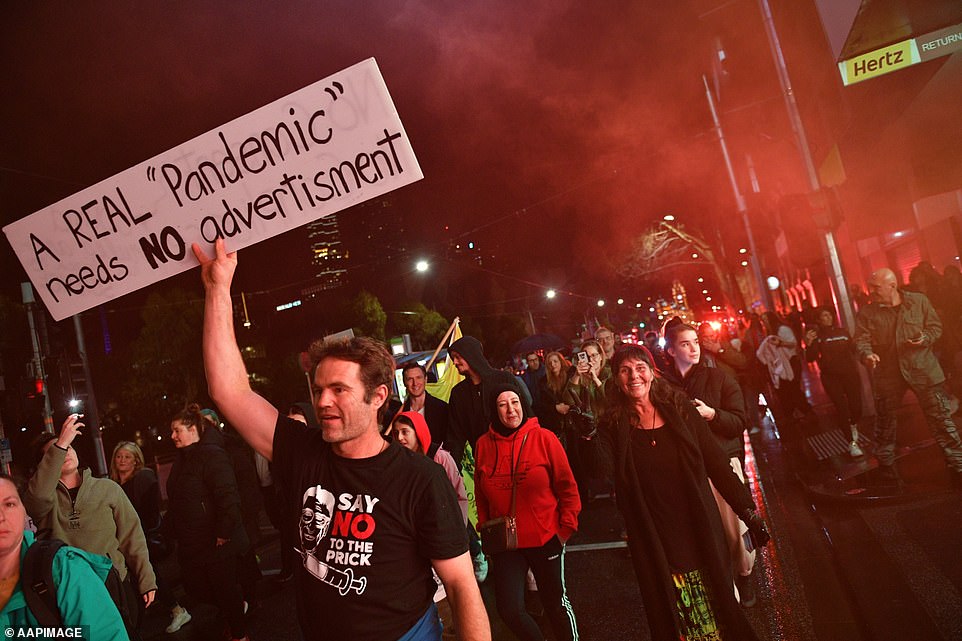 One man, carrying a sign suggesting the pandemic was not real, wore a shirt with a slogan urging Australians to avoid the Covid vaccine

Despite the wet weather, Victorians poured into Flinders Street holding up signs calling for freedom, with some reading ‘lockdown kills’ and ‘I have a choice’.

Organisers leading the procession held a huge blue banner with the name of a anti-lockdown website scrawled across it, as they roused fellow protestors through a megaphone.

The lockdown objectors chanted as they marched through the streets, just hours before stay-at-home orders will be roll out across the state.

Face masks were noticeably absent among the crowd, only visible on the police officers standing guard to monitor the demonstration.

Some signs appeared to espouse anti-vax sentiments, such as ‘mandatory vaccines = murder’, while others suggested the pandemic was not real. 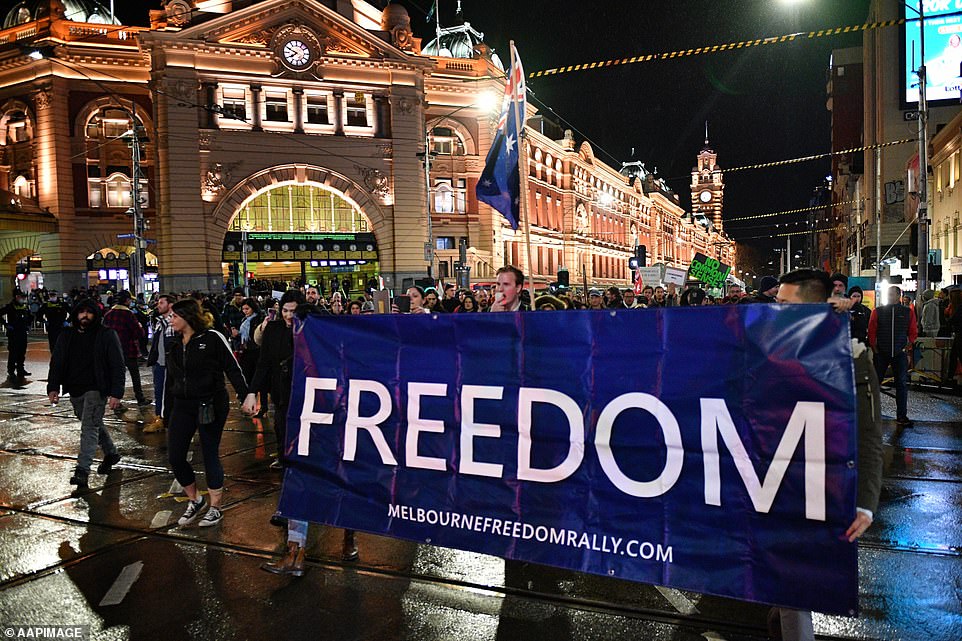 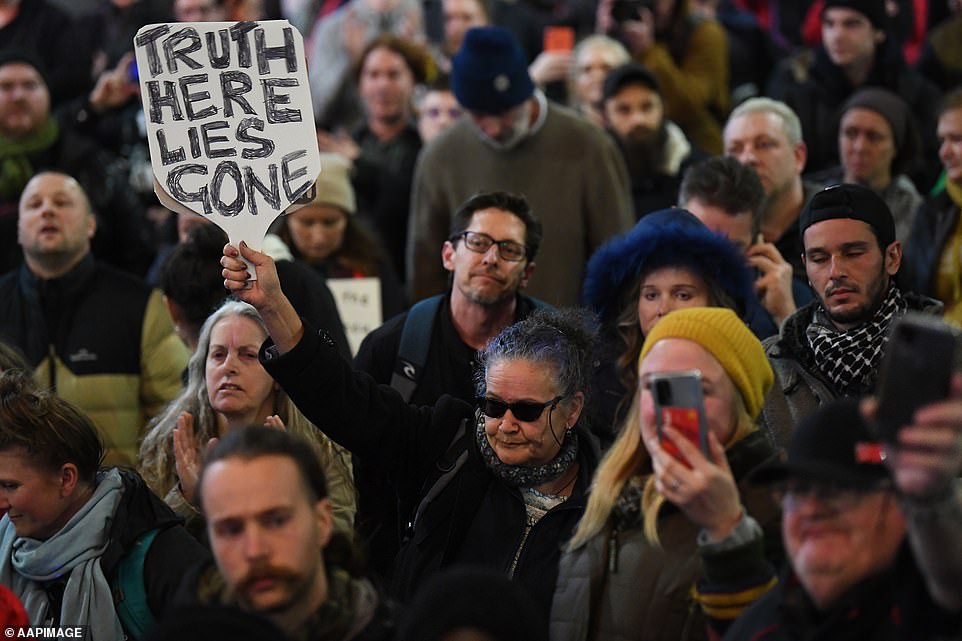 From 11.59pm on Thursday, Victorians will only be able to leave home for five reasons – to shop for food and essential items, provide or receive care, exercise, work or study if they are unable to from home and to get vaccinated.

The same rules that applied during last month’s lockdown will be reimposed, including a five-kilometre travel limit for exercise and shopping and compulsory masks indoors and outdoors.

The lockdown will end at 11.59pm on Tuesday, though restrictions in regional Victoria could be lifted earlier if it is safe to do so.

Mr Andrews said the state’s contact tracers were moving faster than they ever have, but haven’t been able to keep up with the spread of the Delta variant.

‘We’ve got no choice. We have to do this, otherwise, it will get away from us. We don’t want this getting away from us and being locked down for months,’ he told reporters. 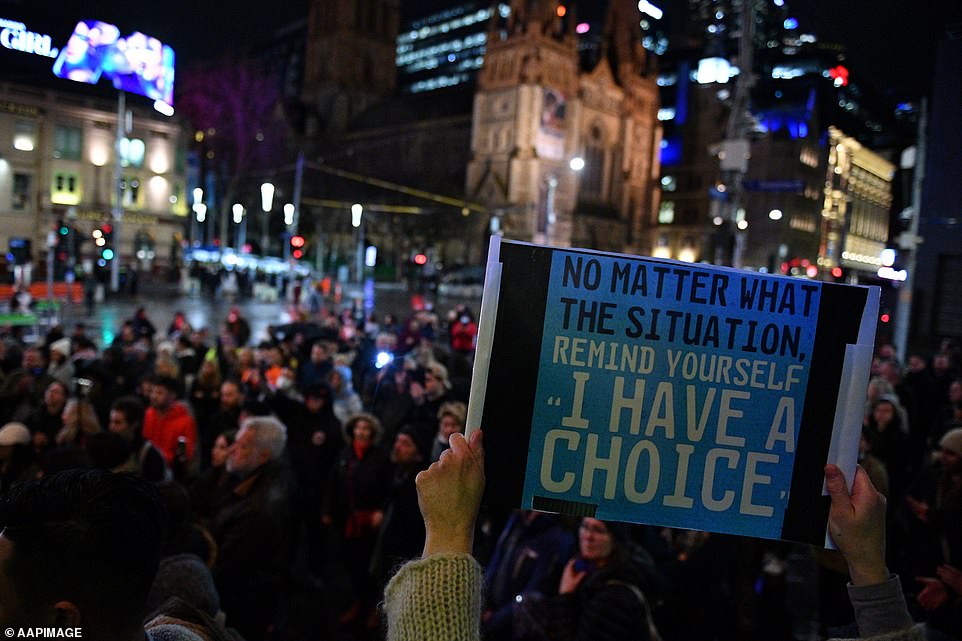 Daniel Andrews on Thursday said Victoria had ‘no choice’ but to enter a five-day lockdown, but some residents disagreed- with one woman carrying a sign opposing the premier’s statement 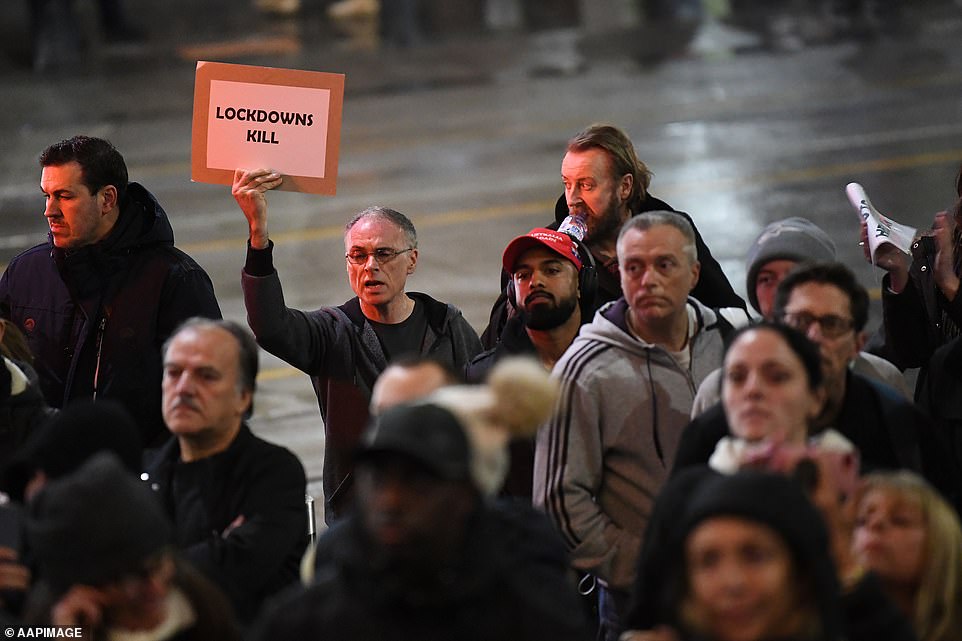 One protestor made a sign reading ‘lockdown kills’ as the state braces to enter its fifth crippling lockdown from 11.59pm

There are now 18 community COVID-19 cases associated with two separate outbreaks, both of which originated in NSW.

Two COVID-infected NSW removalists breached their workers permit conditions and spread the virus during a drop-off at the Ariele Apartments in Maribyrnong late last week.

Meanwhile, a member of a family who returned from Sydney went to the supermarket when they were meant to be isolating at home.

Mr Andrews would not be drawn on whether Victoria’s lockdown could have been avoided if Sydney had locked down sooner.

‘I can’t control what happens and doesn’t happen in NSW,’ he said.

‘These cases started in NSW, but I’m determined they will end here. We will put this out with the help of every single Victorian.’

Of greatest concern to authorities are three cases who tested positive after attending an AFL match between Carlton and Geelong at the MCG on Saturday.

COVID-19 Commander Jeroen Weimar said the cases appear to be linked to an infectious man who lives at the Ariele Apartments and attended the match in the MCC member’s reserve on level two.

He said the trio are not known contacts of the infected man and that it appeared to be a case of ‘stranger-to-stranger transmission’.

The infected man, aged in his 60s, attended the game with his friend – a teacher from Bacchus Marsh Grammar school who lives in Barwon Heads. 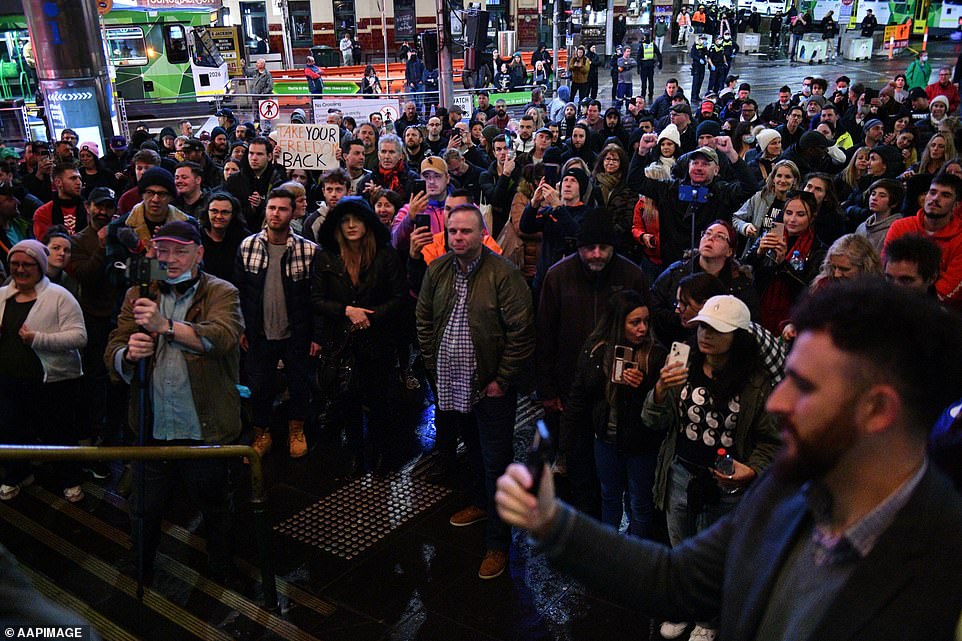 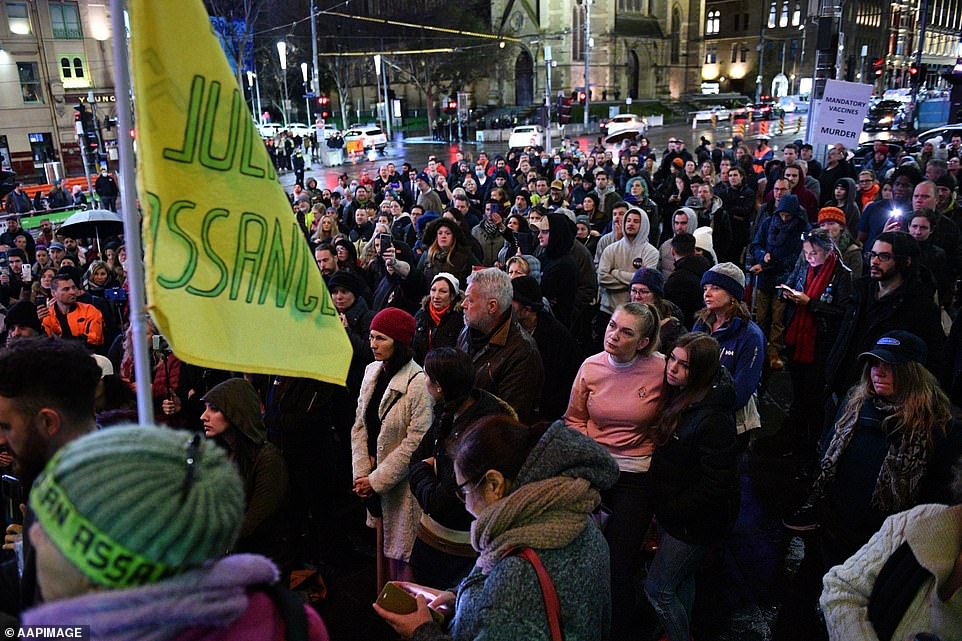 The teacher and two of his family members have also subsequently tested positive for COVID-19.

Bacchus Marsh Grammar and Barwon Heads Primary School were among seven schools forced to close due to possible coronavirus exposure.

There are more than 75 exposures sites across Melbourne and regional Victoria, with some 1500 primary close contacts and 5000 secondary contacts self-isolating.

It is the fifth lockdown for Victoria since the start of the pandemic and the third in 2021.

Mr Andrews said he will be making the case for Commonwealth assistance for affected workers and businesses.

Opposition Leader Michael O’Brien said he said he felt for small businesses and students forced to learn from home, as well as those forced to cancel weddings, birthdays and special events.

“This is going to be a massive kick in the guts for a state that’s done it so tough already,” he said. 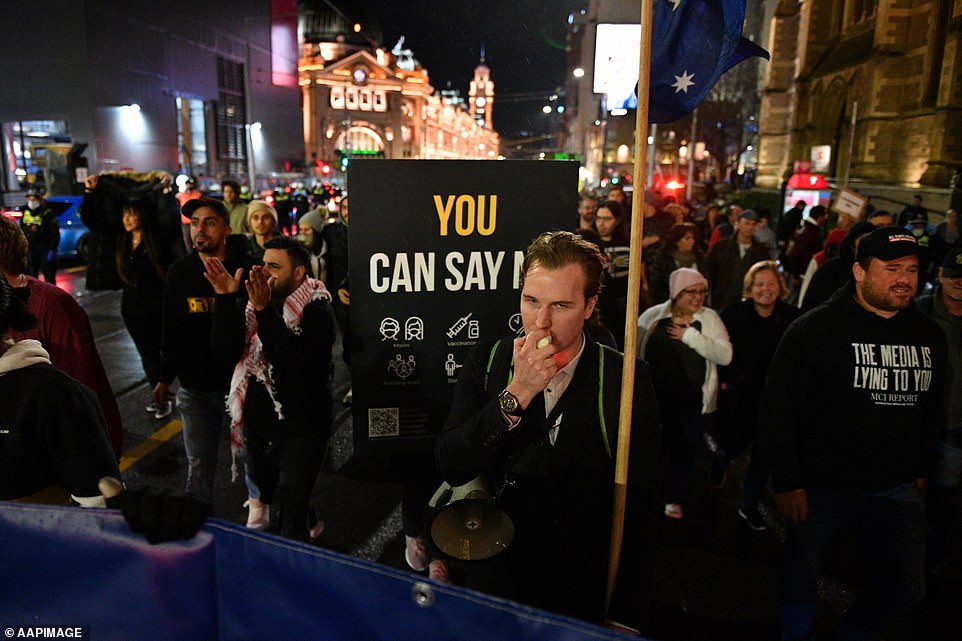 A man chanted through a megaphone, rousing fellow protestors, as he led the procession through Flinders Street

Moïse’s body moved to Cap-Haitien in preparation for funeral