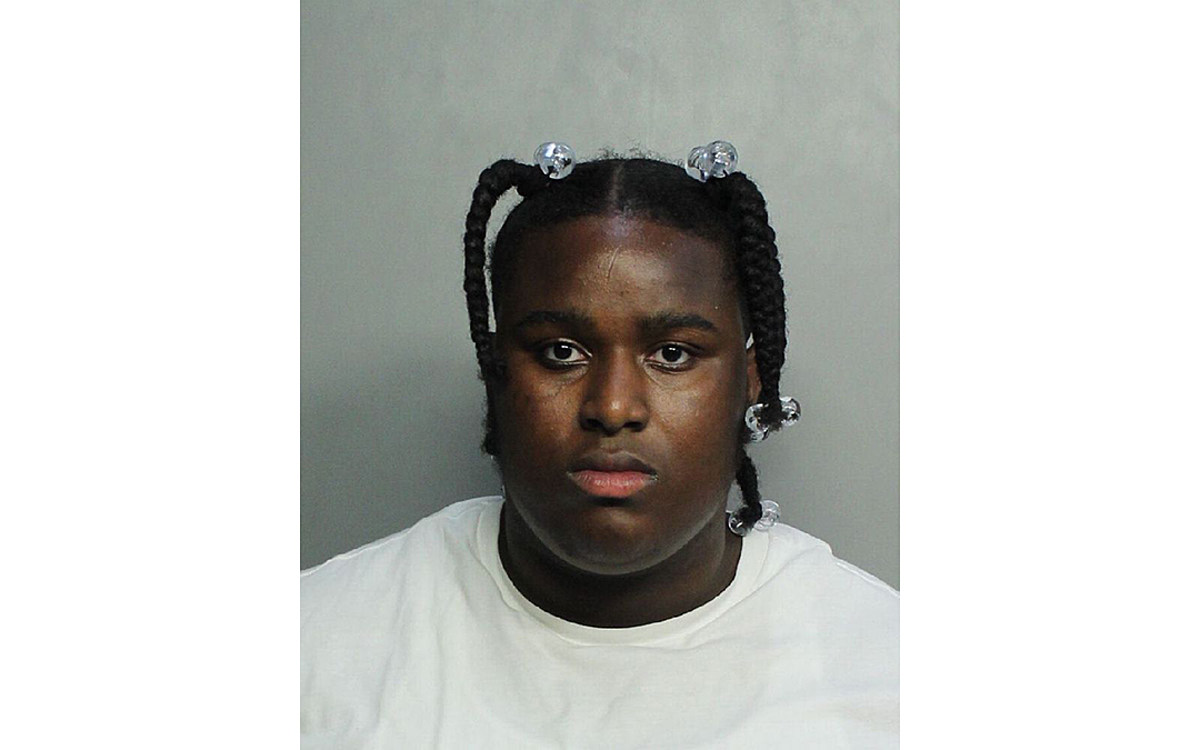 According to police records obtained by XXL on Wednesday morning (June 2), the rapper, born Wisdom Awute, 21, and another man named Christopher Urena, 29, were taken into custody by Miami Beach police Tuesday (June 1) following the shooting that transpired near the tourist strip’s Prime 112 restaurant on 1st Street and Ocean Drive. Of the two people who sustained injuries, one was shot in the leg. The other was shot in the upper right rear torso, remains hospitalized and is paralyzed.

A rep for the Miami Beach Police Department told XXL in a statement today: “In less than 24 hours, Miami Beach detectives were able to ensure those responsible for the shooting were arrested and charged. We will now work closely with the State Attorney’s Office to ensure a successful prosecution.”

The shooting incident stems from an alleged argument between two parties that escalated.

According to the police reports, after the argument, Urena got into a Chrysler 300, which was blocking the valet. The car did not belong to him. After Urena attempted to move the vehicle, he claims he was approached by men holding guns. Urena claims he was being shot at as he drove away. After fleeing the scene, Urena was stopped by police, who requested his ID. The man said his identification was in his black satchel and when police went to retrieve the ID, a gun magazine was also found in Urena’s bag. He couldn’t recall where the corresponding gun for the magazine was located.

The report additionally states that two men, Carlos Aviles and Emerson Delgado, were trying to get into their car, which was parked in front of Prime 112, around 11:20 p.m. on Wednesday evening (May 31) when they got into an altercation with a “famous musical entourage.” The argument escalated to the point where Delgado was allegedly struck in the face by a member of the other party. Delgado began to run away and Aviles identified Wisdom as the person who began chasing after Delgado. Wisdom reportedly pulled out a firearm and aimed it at Aviles, who says he feared for his life. Then Wisdom allegedly redirected his aim to Delgado, shooting him in the calf. Awiles identified Wisdom as the shooter. Wisdom was taken into custody after being located at JV Marriott Marquis Miami Hotel, where he was staying at the time. Wisdom reportedly refused to provide any statements to police and invoked his rights.

After the shooting, police detained several men in a Cadillac Escalade at a traffic stop on MacArthur Causeway. All individuals were taken in for questioning, and one of the men, Michael Awute, said he observed Urena shooting one of the victims in the back.

Urena was witnessed on Prime 112’s surveillance camera walking behind victim Williams before gunfire erupted, and Urena ultimately shot him in the back. Urena is also seen getting into the Chrysler 300 that doesn’t belong to him. One of the men in the Cadillac Escalade apparently tried to stop Urena from fleeing in the stolen car, to which he accelerated in the southbound direction. Due to friends of the man fearing for his safety as the car was being used as a weapon, shots were fired at the Chrysler 300.

Among the individuals taken in for questioning was DaBaby, born Jonathan Kirk, who was interviewed by police and later released. He doesn’t appear to be facing any charges. Baby’s attorney, Drew Findling, told TMZ yesterday, “Mr. Kirk has been released by the police. No criminal charges have been filed against him.”

XXL has reached out to a rep for Wisdom for a comment.