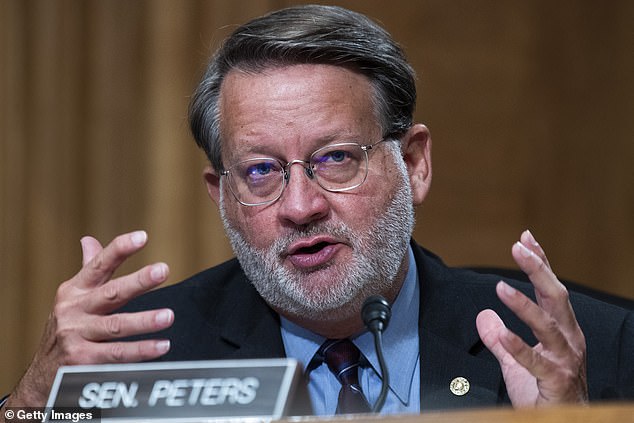 A Democratic senator locked in a tight re-election fight revealed to Elle he and his now ex-wife’s abortion story.

Michigan Sen. Gary Peters told the magazine that he and his first wife Heidi were expecting their second child when her water broke at only four months.

‘It’s a story of how gut-wrenching and complicated decisions can be related to reproductive health, a situation I went through with my first wife,’ Peters told Elle.

Sen. Gary Peters, a Michigan Democrat in a tough re-election fight, became the first sitting senator to tell his abortion story. He told Elle that his first wife had to abort the fetus of their second child, after her water broke prematurely and her life was put in danger Sen. Gary Peters (center) with his daughters Alana (left) and Maddy (right). Peters shared the story of how his first wife needed an abortion after her water prematurely broke, but the hospital wouldn’t carry out the procedure due to ‘political’ reasons

The baby, which was very much wanted, Peters made clear, would not survive months in the womb without amniotic fluid.

The doctors sent Heidi home expecting her to miscarry the fetus naturally.

When that didn’t happen, and a slight heartbeat was detected, the doctor treating Heidi recommended she abort.

However, that was not an option because the hospital had banned the procedure, despite the incident happening in the 1980s, the decade following the Supreme Court’s landmark abortion decision in Roe v. Wade.

The doctor, again, sent the couple home to await a miscarriage.

‘The mental anguish someone goes through is intense,’ Peters told Elle, ‘trying to have a miscarriage for a child that was wanted.’

At the hospital for a third day, the doctor said she could lose her uterus and if she became septic, she could die, Peters recalled.

The doctor tried appealing to the hospital’s board in order for Heidi to have an abortion.

‘I still vividly remember he left a message on the answering machine saying, “They refused to give me permission, not based on good medical practice, simply based on politics. I recommend you immediately find another physician who can do this procedure quickly,”‘ Peters told Elle.

The Peters were able to find another hospital that would perform an abortion on Heidi due to a personal connection. The Democratic senator said that the emergency abortion saved her uteral and possibly her life.

Heidi told Elle that the experience was ‘painful and traumatic.’

‘If it weren’t for urgent and critical medical care, I would have lost my life,’ she told the magazine.

Peters is one of the more understated Democratic members in the U.S. Senate, but his Michigan race will help decide the Senate’s balance. 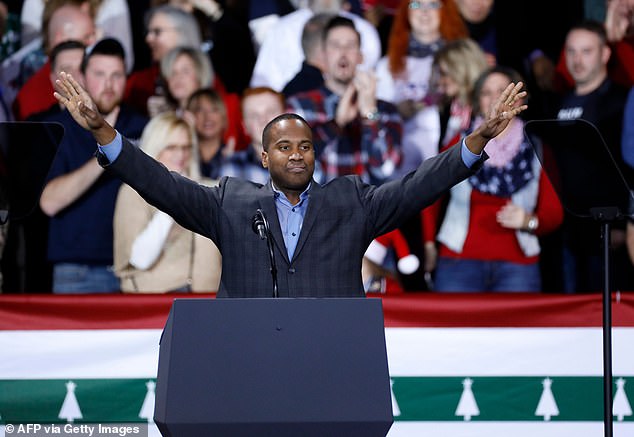 Sen. Gary Peters is being challenged by Republican John James (pictured) who is anti-abortion and has likened the pregnancy-ending procedure to ‘genocide’

James is staunchly anti-abortion, having referred to the procedure as ‘genocide.’

Abortion has become a major issue in the Senate due to the nomination of Judge Amy Coney Barrett to replace the liberal Supreme Court Justice Ruth Bader Ginsburg, who defended a woman’s right to choose.

Barrett, on the other hand, had signed her name onto a 2006 newspaper ad that called the Roe v. Wade decision ‘barbaric.’

Peters – who becomes the first member of the U.S Senate to share an abortion story – said the ordeal ‘enacted an incredible emotional toll.’

‘It’s important for folks to understand that these things happen to folks every day,’ he told Elle. ‘I’ve always considered myself pro-choice and believe women should be able to make these decisions themselves, but when you live it in real life, you realize the significant impact it can have on a family.’

Kanye West’s First Presidential Campaign Ad Is All About Faith