Democrats ask Amy Coney Barrett whether Trump could pardon himself

Amy Coney Barrett wouldn’t say Wednesday whether President Donald Trump could pardon himself as she held strong on her vow not to pre-commit to any potential future Supreme Court cases.

The question came from Vermont Senator Patrick Leahy as he made a broader inquiry on whether Barrett believes a president, or anyone on the executive or legislative branch, must comply with decisions made by the federal courts.

‘If a president refused to follow what they had said, could that be a threat to our constitutional form of government?’ Leahy pushed as Barrett maintained that she would not weigh in on questions of potential or hypothetical cases.

She also said that while the court can make decisions, they have no ability to enforce them.

‘Well, as I said, the Supreme Court can’t control whether or not the president obeys,’ she said. ‘Abraham Lincoln once disobeyed an order during the Civil War of a circuit court. So a court can pronounce the law and issue a judgement, but it lacks control over how the political branches respond to it.’ 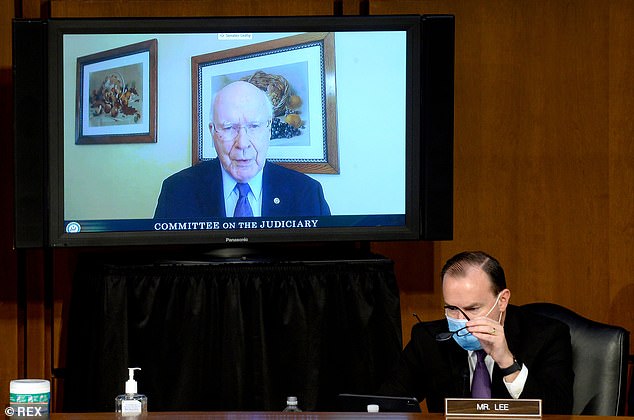 ‘If a president refused to follow what they [The Supreme Court] had said, could that be a threat to our constitutional form of government?’ Senator Patrick Leahy asked Barrett as he dialed in remotely for the hearing 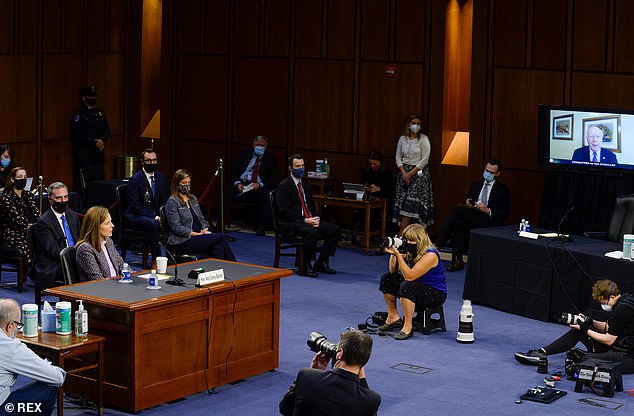 She also said she could not ‘offer a view’ on what her opinion would be without actually going through the judicial process in a future potential case.

The 80-year-old Democratic senator, who joined the hearing virtually amidst fears of contracting coronavirus, asked what Barrett would do as a Supreme Court Justice if a president did not follow a decision reached by the court.

‘I asked [Justices Gorsuch and Kavanaugh] what happens,’ Leahy said, recalling the confirmation hearings for the other two Trump-nominated justices. ‘And they made it clear that a president cannot refuse to comply with a court order and the Supreme Court’s word is the final word on the matter.’

‘Do you agree that a president must follow a court order and the Supreme Court’s word is final, or is it only final as far as the lower courts are concerned?’ he asked

Barrett agreed that no one, not even the president is above the law.

In Leahy’s line of questioning, he was referencing a conversation he had with Barrett last week where she said the ‘Supreme Court’s would have the final word as far as lower courts are concerned,’ but did not, at the time, comment on the validity in other situations.

‘First, I know both Justices Gorsuch and Kavanaugh said that no man is above the law – and I agree with that,’ Barrett responded.

‘But I conversed with Senator Lee yesterday about Federalist 78, which says that courts have neither force nor will. In other words, we can’t do anything to enforce our own judgements. And so what I meant in the conversation with you is that as a matter of law the Supreme Court may have the final word, but the Supreme Court lacks control over what happens after that.

‘The Supreme Court, and any federal court, has no power, no force and no will – so it relies on the other branches to react to its judgements accordingly,’ she concluded.

This situation could directly come into question should the election end up at the Supreme Court – and also if Trump were to pardon himself from a crime he were convicted of.

There are concerns the president would not comply with a court decision if he feels it is wrong or unfair to him.