President Donald Trump said Thursday that he would not make coronavirus vaccinations mandatory for Americans.

‘I don’t believe I’d ever do a mandated vaccine, because I just don’t think I would do that, where you have to have it,’ Trump told Stuart Varney on Fox Business Network’s ‘Varney & Co.’ ‘Because there are some people who feel strongly about the whole situation.’

The president called into the show Thursday morning and spoke for about 45 minutes, giving himself high marks for his handling of the coronavirus pandemic that has left 217,000 Americans dead and complaining that his immunity from contracting the virus again may not be for life.

‘I have immunity now, I hear from anywhere from four months to a lifetime,’ Trump told the host. ‘Sort of interesting as soon as I beat it they said no, he’s only immune for four months.’

The president made a similar gripe in Johnstown, Pennsylvania Tuesday night.

‘Once I got it, they give you four months,’ Trump said. ‘Anybody else but me, you’re immune for life.’

Doctors still don’t have a clear answer about COVID-19 immunity, especially in light of the Nevada case where a man has now been infected twice.

An elderly woman in the Netherlands became the world’s first death of an individual who caught the coronavirus twice.

‘If it was you they’d say he’s immune for his lifetime. But with me they say four months,’ Trump said Thursday morning. ‘They want to make it look as bad as possible.’

Trump complained about his treatment by the press throughout the interview.

‘We don’t get enough credit for anything, frankly,’ he told Varney. ‘You know we’ve done a great job on so many things, including COVID, or the China virus. Because we we’ve done has been incredible.’

The White House has never answered when Trump last tested negative before he contracted the coronavirus earlier this month. Varney didn’t ask that specific question, but he did ask the president if he’s tested every day.

He said he was tested a lot especially ‘after I got rid of it.

Trump returned to the campaign trail Monday, with a rally in Florida, and has since held large-scale gatherings in Pennsylvania and Iowa.

‘Having gone through it, I’m the president of this country I can’t sit in a basement and not see anybody for a year, I just can’t do that,’ Trump explained, a clear knock at his Democratic rival Joe Biden, who has been far more cautious about campaigning in-person than the president. ‘I beat it and I beat it quickly,’ Trump also said.

Varney pointed out that Trump has been criticized for holding rallies amid a pandemic, especially because supporters aren’t socially distanced and many don’t wear masks.

‘Well Joe doesn’t have any rallies because nobody shows up to his rallies so he doesn’t have the same problem,’ Trump started to answer. ‘But what I do is outside is a big thing and if you look at those people, they really are wearing masks. I looked last night in Iowa, there were many, many people wearing masks.’

The president has made a point to toss out masks to supporters at the beginning of his rallies this week. 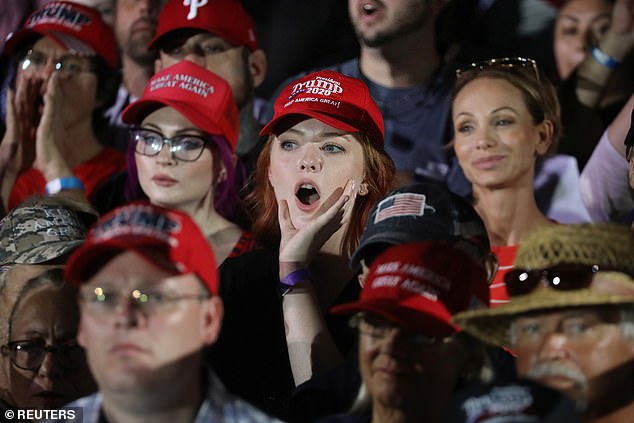 Asked about criticism he’s received for holding mass gatherings during a pandemic, President Donald Trump said there are ‘tmany, many people wearing masks’ at his rallies. A crowd gathered Monday night at the Orlando Sanford International Airport to see Trump 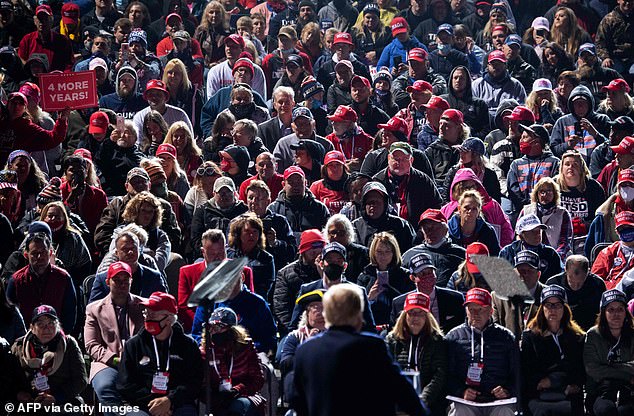 The president appeared Tuesday in Johnstown, Pennsylvania, where he suggested 25,000 to 30,000 people showed up. The president argued that many of his supporters are wearing masks to these large gatherings, held amid the coronavirus pandemic

However, photos show droves of Trump supporters un-masked, as the president has made fun of Biden for his near-constant mask-wearing.

The president then falsely claimed that his own Centers for Disease Control and Prevention put out a ‘statement’ that ’85 per cent of the people wearing masks catch’ the coronavirus.

Trump likely got the number from an article on the right-wing news site The Blaze, which said of those surveyed who had contracted COVID-19 85 per cent ‘always’ or ‘often’ wore face coverings.

Mediaite reported that the number came from a CDC paper that found that 71 per cent of COVID-positive study participants reported always wearing masks, while another 14 per cent said they often wore masks, in the two weeks leading up to their coronavirus diagnosis.

That’s where the ’85 per cent’ figure Trump cited came from.

The paper found that a slightly bigger group, 74 per cent, said they always wore masks and didn’t contract COVID-19.

More generally, the CDC still recommends mask-wearing and the paper sounded the alarm about people engaging in activities, like eating and drinking at restaurants, where it’s impossible to keep a face coverings on.