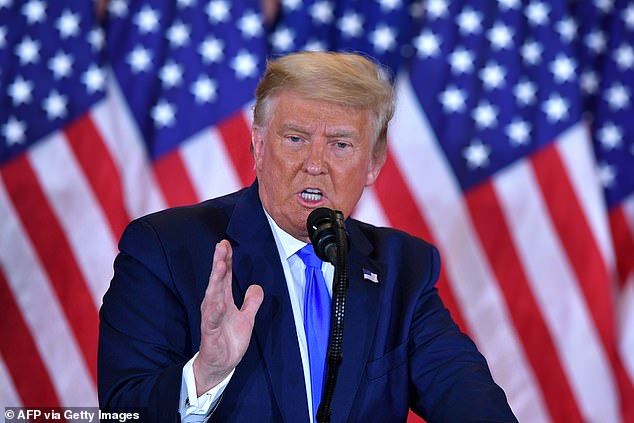 Donald Trump was said to have been ‘like Mad King George’ following his election defeat, muttering ‘I won, I won, I won’, according to one close adviser.

The president then turned to loyalists like Rudy Giuliani and Sidney Powell who were ‘willing to tell him what he wanted to hear’, The Washington Post reports.

Both Trump and Giuliani, his personal attorney, have repeatedly claimed that Democrats falsified mail-in ballots to steal the election.

As recently as Thanksgiving the president is said to have been asking aides: ‘Do you think it was stolen?’

British King George III is widely referred to as the ‘Mad King’ after suffering episodes of mania during his reign.

He is most remembered as the king who lost the American colonies. The King suffered serious bouts of illness in 1788-89 and again in 1801, George became permanently deranged in 1810.

Donald Trump was said to have been ‘like Mad King George’ following his election defeat, muttering ‘I won, I won, I won’, according to one close adviser 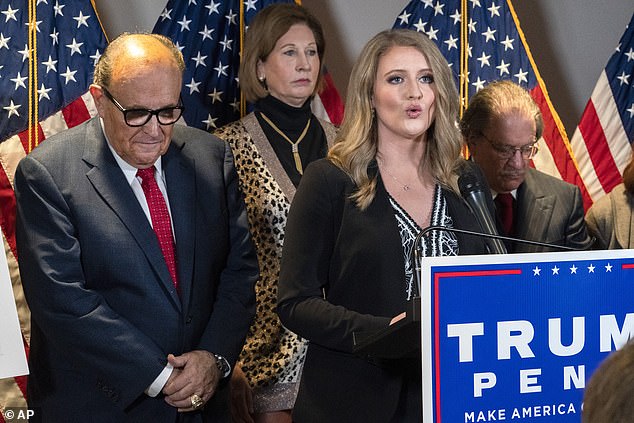 The president then turned to loyalists like Rudy Giuliani, left, Jenna Ellis, right, and Sidney Powell, center, who were ‘willing to tell him what he wanted to hear’

Trump told Fox News during a rambling interview on ‘Sunday Morning Futures’ that even ‘most Democrats’ believe ‘election fraud’ led to Biden’s win.

In the days following the election Trump’s advisers are said to have been happy to ‘scratch his itch’, with one adding: ‘If he thinks he won, it’s like, ‘Shh…we won’t tell him.’ ‘

Campaign pollster John McLaughlin is also said to have told the president he had a positive approval rating among and most voters thought their lives had improved in the last four years.

Aides are then said to have ‘rolled out everybody up who is willing to do it into a clown car’ before ‘rolling them out’ for press conferences.

A source said: ‘Anyone who is willing to go out and say, ‘They stole it,’ roll them out.’

Moments after the Associated Press called the race for Biden on November 9, Giuliani stood in front of a landscaping company in Philadelphia with a handful of poll watchers and declared they’d been kept too far away to check for any inaccuracies. Something fishy was going on, he said.

Four days later, on November 13, Giuliani, along with fellow Trump loyalist and attorney Jenna Ellis  staged a ‘hostile takeover’ of the Trump campaign. 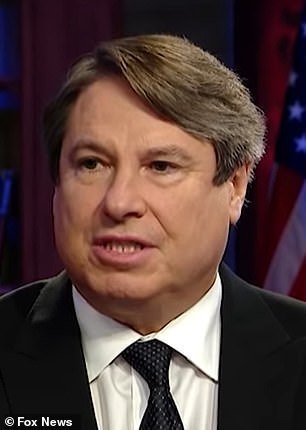 Then on November 19 Giuliani would again appear, this time sweating with hair dye running down his face during a lengthy press conference on the issue alongside Powell and Ellis. Trump is said to have told aides that press conference made him ‘look like a joke’.

The Post, who said they spoke with 32 sources close to the president, also confirms that Trump made son-in-law Jared Kushner call Rupert Murdoch on the night of the election, furious that his Fox News channel had calle Arizona for Biden.

One source said: ‘He was yelling at everyone. He was like, ‘What the hell? We were supposed to be winning Arizona. What’s going on?’

Ahead of the election he is said to have said of Biden: ‘Oh, wouldn’t it be embarrassing to lose to this guy?’

On November 23 Trump tweeted that he was directing his team to cooperate on the transition but still refused to concede and vowed to continue to fight in court.

He also sought to then distance himself from Powell after a tumultuous several days in which she made multiple incorrect statements about the voting process, unspooled unsupported and complex conspiracy theories and vowed to ‘blow up’ Georgia with a ‘biblical’ court filing. 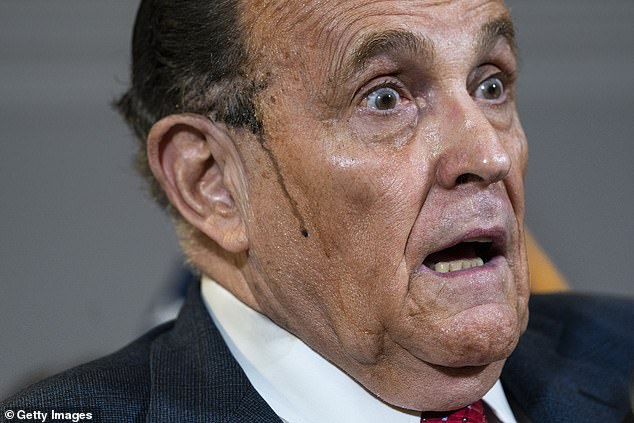 Rudy Giuliani speaks to the press about various lawsuits related to the 2020 election, inside the Republican National Committee headquarters on November 19, 2020 in Washington, DC 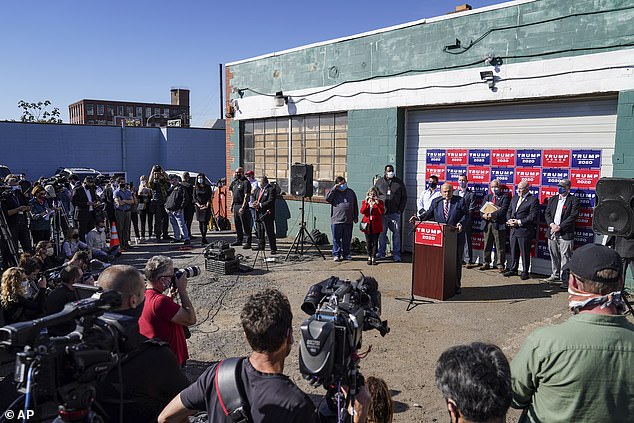 Trump has still not conceded to Biden, despite several swing states certifying the election for the former vice president. Almost daily he tweets that he is the true winner and alleges there was massive fraud, rigging and cheating by Democrats to ‘steal’ the election for Biden.

Biden passed 80 million votes last week as states continue to count ballots as a record number of people voted by mail in the midst of the coronavirus pandemic. 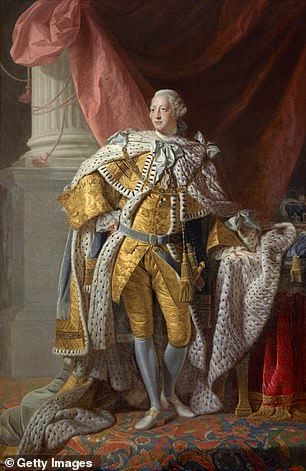 British King George III  is most remembered as the king who lost the American colonies. The King suffered serious bouts of illness in 1788-89 and again in 1801, George became permanently deranged in 1810

And on Sunday Trump said the U.S. will never have another Republican president, senator or representative elected if they allow Democrats to get away with ‘stealing’ the election for Biden.

He also suggested that Democrats now know how to ‘cheat’ the system effectively and will have their candidates win from now on.

‘The classic symptoms of an outsider is, there has to be a conspiracy. It’s not my shortcomings, but there’s a cabal against me. That’s why he’s prone to these conspiracy theories.’

Biden has already begun announcing members of his Cabinet as he prepares to take office on January 20. The General Services Administration also finally ascertained the election for Biden last week, meaning he can now start receiving daily intelligence briefings and communicate with the coronavirus task force.

The president, however, said last week that Biden has to ‘prove’ he earned all of his votes legally before he can take office.

‘Biden can only enter the White House as President if he can prove that his ridiculous ‘80,000,000 votes’ were not fraudulently or illegally obtained,’ the president posted to Twitter Friday. ‘When you see what happened in Detroit, Atlanta, Philadelphia & Milwaukee, massive voter fraud, he’s got a big unsolvable problem!’

Trump’s tweets claiming fraud and insisting he won the election have been flagged by Twitter.

THE MADNESS OF KING GEORGE III 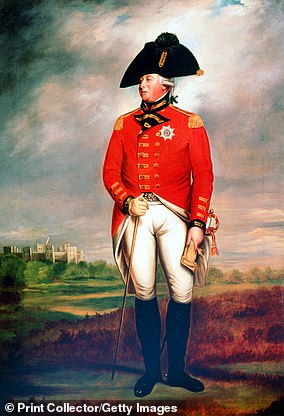 King George III is widely referred to as the ‘Mad King’ after suffering episodes of mania during his reign.

He reigned from 1760 to his death in 1820 – one of the longest reigns by any British monarch in history.

The eldest son of Frederick, Prince of Wales, and Princess Augusta of Saxe-Gotha, George succeeded his grandfather George II at the age of 22, becoming the third Hanoverian monarch to reign.

He was the first Hanoverian to speak English as his first language and to be born in the country.

He is most remembered as the king who lost the American colonies and went mad and was famously depicted in Nicholas Hytner’s 1994 The Madness of King George.

But according to the Monarchy’s official website, George’s direct responsibility for the loss of the colonies is not great.

He opposed their bid for independence to the end, but he did not develop the policies (such as the Stamp Act of 1765 and the Townshend duties of 1767 on tea, paper and other products) which led to war in 1775-76 and which had the support of Parliament.

During his episodes he frequently withdrew to Kew Palace leaving the country in crisis about who was to rule in his absence.

In the last decade of his reign he was declared mentally unfit to rule and his eldest son – the later George IV – acted as Prince Regent from 1811.

Some medical historians have said that George III’s mental instability was caused by a hereditary physical disorder called porphyria. This has a number of symptoms including blue urine.

However researchers at the University of London recently came up with a theory that his mania was caused by mental illness.

They analysed his letters and speech, which were known to be so long the monarch would sometimes foam at the mouth.

The monarch would sometimes have to be held to the floor by his assistants when he suffered convulsions.

Facebook said It would ban holocaust deniers. Instead, its algorithm provided a network for them

Covid-19 China: WHO experts in Wuhan begin probe on origins