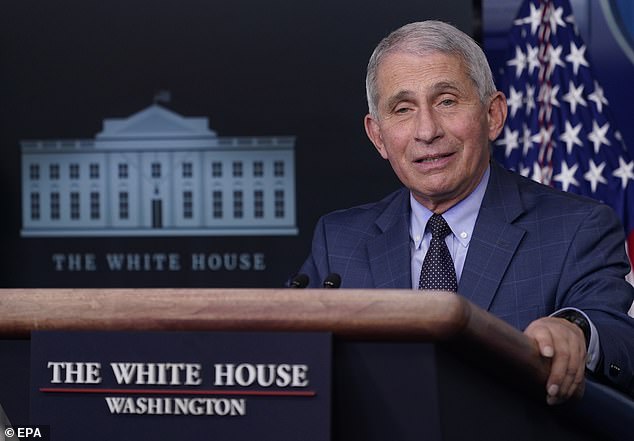 Dr. Anthony Fauci, the Director of the National Institute of Allergy and Infectious Diseases, has urged New York and other states to accept a COVID-19 vaccine once it’s approved by the FDA.

During a livestreamed event with the Washington Post on Monday, Fauci said he ‘doesn’t agree’ that it’s necessary for Gov. Andrew Cuomo and other state leaders to conduct their own independent reviews of a vaccine before distributing it.

‘Hopefully I can appeal to them to say that yes, you can look at the data, everybody should be looking at the data — there’s nothing wrong with that — but trust the process because it’s a sound process,’ Fauci said.

Fauci added that he ‘doesn’t fault’ Cuomo and others like him for ‘wondering what’s going on’, though said he fears states carrying out their own reviews would significantly slow the process of rolling out the vaccine to their residents.

‘I hope if they do it, then they do it in an expeditious manner that doesn’t delay anything,’ he said.

Dr. Anthony Fauci (pictured during a White House briefing on November 19) said he ‘doesn’t agree’ that its necessary for state leaders, such as New York Gov. Andrew Cuomo, to carry out their own reviews of a COVID-19 vaccine once it’s been approved the the FDA

Fauci’s comments come in relation to plans unveiled by Cuomo in October, in which, during an interview with GMA, he said he will be assembling a team of experts to review the vaccine before distributing it across the Empire State.

Cuomo said the reasoning behind his decision what that he believes New Yorkers are going to need ‘someone other than this FDA and this CDC saying it’s safe’.

‘You’re going to say to the American people: “Now here’s a vaccine, it was new, it was done quickly but trust this federal administration and their health administration that it’s safe and we’re not 100 percent sure of the consequences”?’ Cuomo told the network at the time.

During his interview with the Washington Post’s Robert Costa on Monday, Fauci assured the American public that any FDA-approved vaccine will be safe, and that he will be getting it as soon as one’s available.

‘This is a solid process,’ Fauci said, ‘I can tell you that when my turn comes up and the FDA says this is safe and effective, I myself will get vaccinated and I will recommend that my family gets vaccinated.’

But while ‘help is on the way’, with three companies – Pftizer, Moderna, and AstraZeneca – all showing positive results in vaccine trials, Fauci told Americans ‘hang in there with public health measures’ this Thanksgiving. 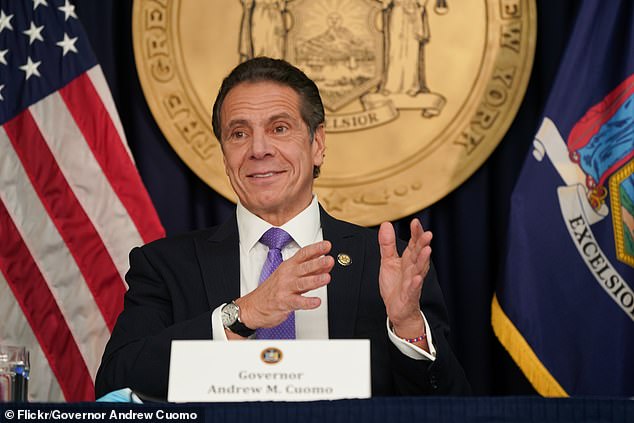 Gov. Andrew Cuomo said last month that he would be assembling his own team of doctors and medical experts to review any coronavirus vaccine, before distributing it across the Empire State 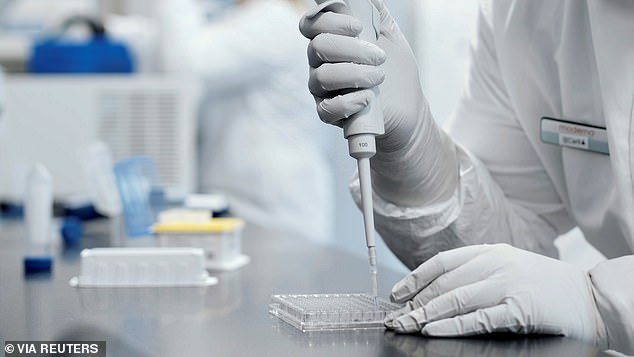 The companies, Pftizer, Moderna and AstraZeneca have all reported positive test results from their vaccine trials, with each found to be 90 percent effective or higher (file image)

While the CDC has ‘strongly advised’ all Americans to refrain from traveling to celebrate on November 26, Fauci told those who still choose to do so to wear a mask indoors.

He warned that people who traveled from outside a household during the coronavirus pandemic were prime candidates for spreading the virus.

‘If they are in your home, you should wear a mask indoors as much as you possibly can,’ he said.

Fauci continued that though Thanksgiving is a ‘precious period of time’, he said that ‘please don’t do something that in fact would put you and your family in danger such as getting a crowded group of people coming from different places and airports or what have you.’

He added that he knows ‘common sense’ would dictate that one couldn’t conceivably wear a mask while at the dinner table, but encouraged people to still take adequate and sensible precautions.

‘In other areas and other times, when you’re in the house, if you have people in your home that are not members of the immediate household and you’re not real sure as to their level of exposure, then to the extent possible you should wear the mask indoors with the obvious exception of when you are eating and drinking.’

Fauci also warned that while dinners and social gatherings of between 5-20 people may seem innocent but they can easily facilitate a spread of the virus.

‘Although those are wonderful parts of our tradition, I just would like to have each family to kind of make that risk assessment, and know and understand that we’re in a difficult situation.’ 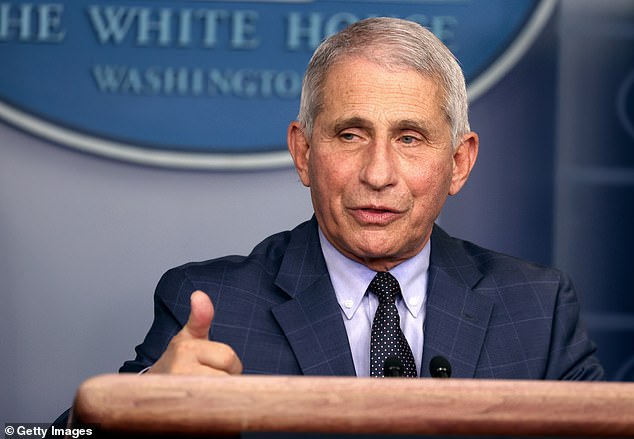 Facui also warned that the COVID-19 death count, which currently stands at 256,000, could top ‘way over’ 300,000 if safety guidelines are not strictly followed this holiday season

More than 12.2 million coronavirus cases and 256,000 fatalities have been reported in the United States to date.

Fauci warned that the country could expect a surge ‘superimposed’ upon the existing surge of COVID-19 cases currently being felt around the country, should people ignore this CDC’s advice and travel across the holiday period.

He predicted that the country could experience a total of ‘well over 300,000’ deaths by the end of the year if Americans refused to ‘double down’ on the advice from medical officials.

‘I don’t want this to be a doomsday statement. It is within our power to not let those numbers happen.’

‘You might want to reconsider travel plans, and certainly try as best as you can to keep congregate meetings indoors,’ Fauci said.

‘I know this is a difficult thing to do, but we’re in a very difficult situation, so it’s better to be careful now and look forward to many, many more in the future, then either endangering yourself or a vulnerable member of your family or friends.’

Earth’s second minimoon was the size of a car and came within 8,100 miles of Earth