Ealing has become London’s new Covid-19 hotspot, figures revealed today as it was confirmed that the capital is being thrust into a Tier Two lockdown from tomorrow night.

Mayor Sadiq Khan said he ‘expected’ an announcement from ministers later today to confirm London will be moved to Tier 2 coronavirus restrictions ‘shortly’. MPs were told this morning it could be as early as midnight on Friday.

Moving from ‘medium’ up to ‘high’ would see the nine million people living in the capital banned from mixing with other households indoors, including in pubs and restaurants.

The Mayor of London sought clarity on provisions made for businesses, support for vulnerable Londoners and test and trace efforts in the capital, including for those self-isolating.

In a letter to Boris Johnson, Mr Khan said that as the rate of infections in London was ‘fast approaching’ 100 cases per 100,000, admitting it was ‘likely’ the capital would move to the next alert level as early as this week. 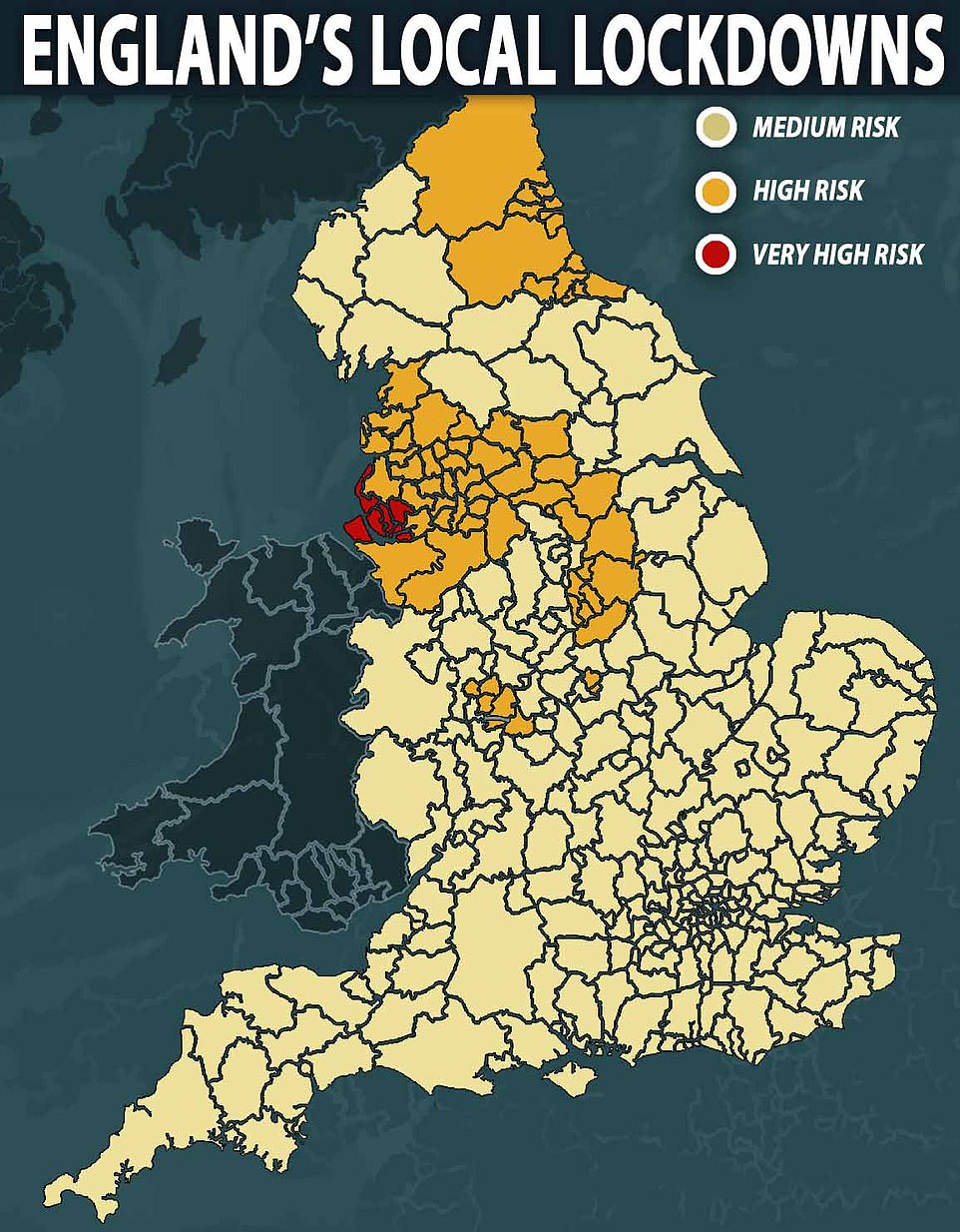 Infection rates appear to be rising all over London, reaching higher levels in the west 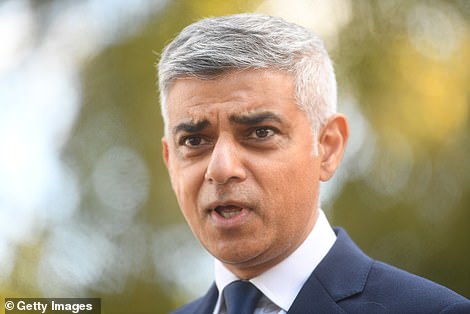 Ealing’s seven-day rolling average has jumped up to 144.5 cases per day from 132.5 just yesterday.

The Government coronavirus dashboard reveals the borough has moved up from the third spot to the top in one day, overtaking Richmond-upon-Thames and Hackney and City of London.

Ten boroughs now have infection rates over 100 per 100,000 people, the equivalent of one person in every 1,000 catching the coronavirus every day.

It comes as Mr Khan confirmed suspicions that London would be moved into Tier 2 with an announcement later today.

He said on Sky News: ‘It’s my expectation that the Government will today announce that London will shortly be moving into Tier 2, or the high alert level of restrictions.

‘I had a meeting this morning, with the Secretary of State for Health, as well as London leaders and scientific advisors. Final conversations with ministers are ongoing around this as we meet.

‘But I expect ministers to make an announcement to Parliament later this morning.

‘This move is based on the expert public heath and scientific advice for what is necessary to save lives in the capital.’

Mr Khan said ‘hospital admissions are up, more patients are going to intensive care units, and sadly, the number of Londoners dying every day is increasing again’.

It comes after Mr Khan said the ‘unique circumstances’ of the capital must be reflected in the approach and support.

He said in his letter to Mr Johnson: ‘It is vital London has the resources to engage, explain, encourage and enforce heightened restriction and support compliance.

‘One London borough has done some specific work to estimate the cost of providing that service for six months from November onward and it is £300k over and above the allocation that was recently made to councils for support to compliance.

‘I am aware that these are discussions that have taken place with other areas that have had restrictions in place and London government would expect to have those discussions as well.’

He added: ‘The capital was hit particularly hard during the first wave with many of our communities and particularly the BAME community, suffering disproportionately.

‘In addition, many families live in overcrowded accommodation and face high levels of homelessness and rough sleeping.

‘Our size and density present specific challenges, with the economic case for protecting businesses in the Central Activities Zone overwhelming.’

Among the requests, Mr Khan urged for clarity on what provisions would be made available for businesses, warning that hundreds of thousands of jobs remain at risk in the capital.

He said it was ‘critical’ that the Government resolves the funding position of Transport for London (TfL), urging a package for the network.

As well as seeking clarity on support for vulnerable Londoners, the mayor called for an immediate increase to testing capacity, as well as a ‘redoubling’ of efforts to ensure testing for staff and residents.

‘I will continue to urge Londoners to be vigilant, follow the rules and exercise caution,’ he said in the letter.

‘I accept that these new measures will impact on businesses and Londoners, but we have a joint responsibility to work together and do what we can to control this virus and save lives.’

The mayor has previously insisted London should move as a whole into higher restrictions despite variable rates across the capital.

He said: ‘Sadiq Khan is failing London. A Mayor should stand up for his city.

‘A Mayor should be a champion for its businesses. Sadiq Khan is letting us down. We need to get London moving.’

None of the 32 boroughs had tipped the threshold before now, according to separate Public Health England data. 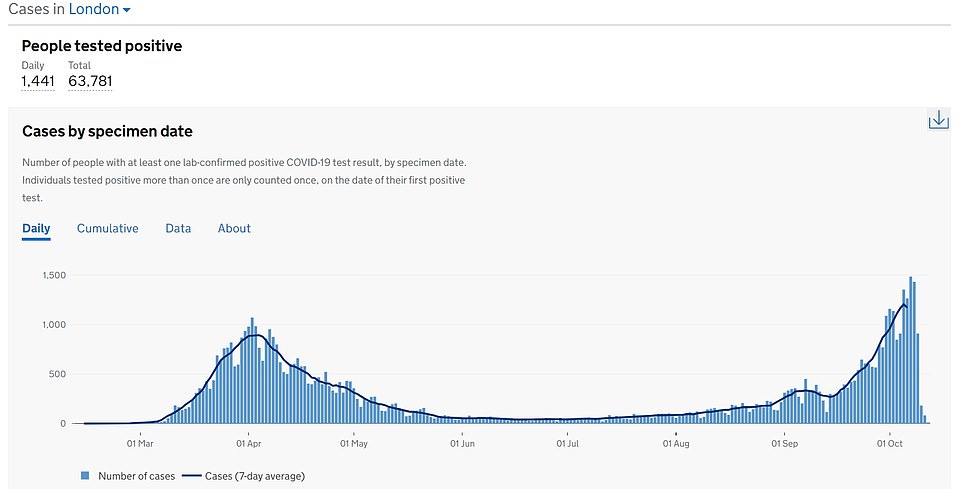 Cases are rising in London but this appears to only be in younger populations, based on hospital data 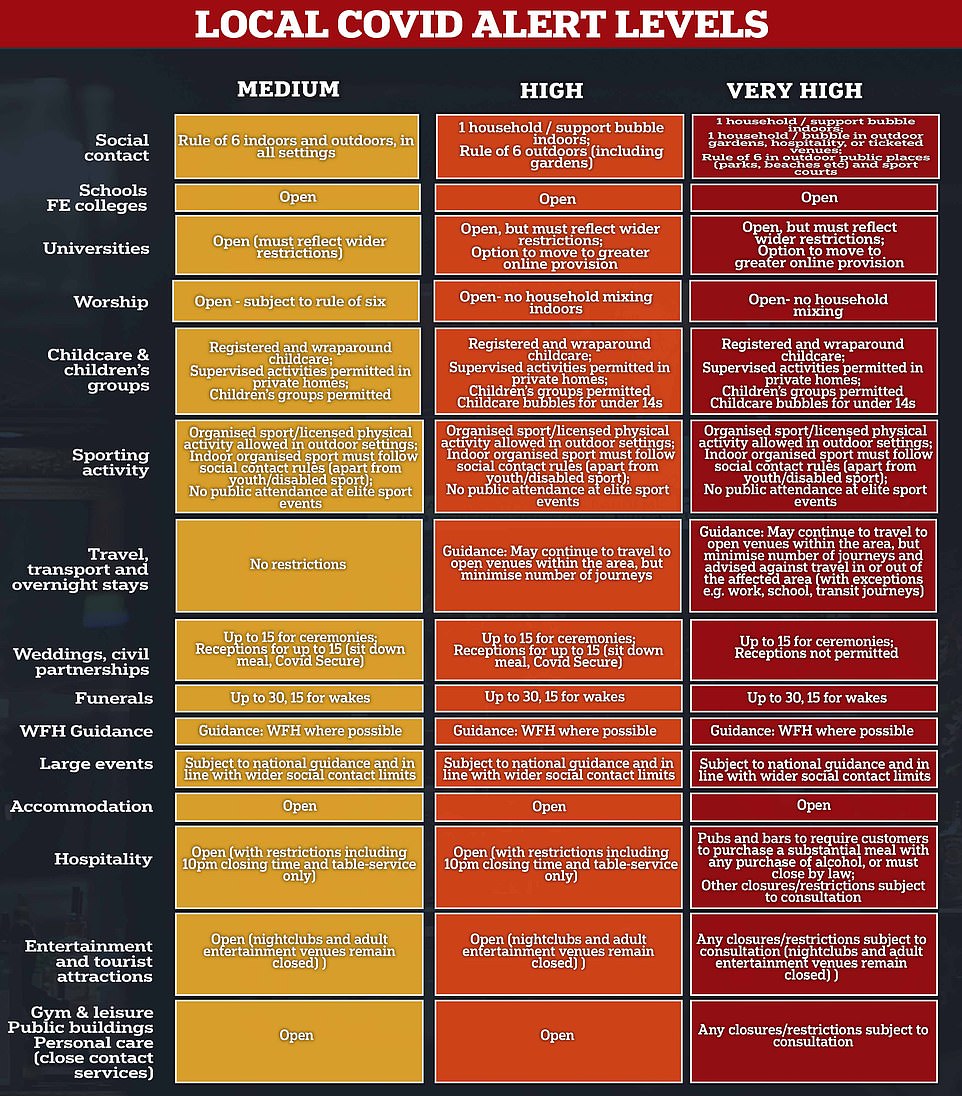 Croydon (69.8), Bromley (67.1) and Sutton (64), all in the south, sit at the other end of the scale with the fewest new cases per day — but all of them have still seen a significant hike in infections over the past month.

The average coronavirus infection rate across London’s boroughs is 94.15 cases per 100,000 people, according to the most recent Department of Health data — the equivalent of nearly one person in every 1,000 in the last week.

However, London’s figures appear to be being skewed upwards by the inclusion in the data of infected students studying in other cities. In Richmond, the capital’s supposed hotspot, analysis shows that a quarter of positive cases in the borough since are actually in places including Manchester, Leeds, Exeter and Durham.

Of 212 cases recorded in Richmond since September 20, 49 were in other towns and cities.

The vast majority of these people were aged 17 to 21, suggesting they were students originally from London whose cases were recorded using their home address.

Yesterday Nickie Aiken, MP for Cities of London and Westminster, seemed to agree lockdown was coming.

She said: ‘We need to deal with this nasty virus, but I’m asking the Mayor to respond calmly and proportionately for the sake of our jobs, our livelihoods and our mental health.

‘Sadly it now looks inevitable that London is going into further lockdown, the Mayor has been lobbying for this for some time, even before the infection rate was increasing.

‘Let’s be in no doubt going into Tier Two will be devastating for businesses and people’s lives in the Capital.

‘Now we need an urgent and clear plan to show how London can turn things around and reopen as soon as it’s right to do so.’

WHAT ARE THE THREE TIERS?

Standard Alliance Insurance plc: What happened to the most capitalized insurance…