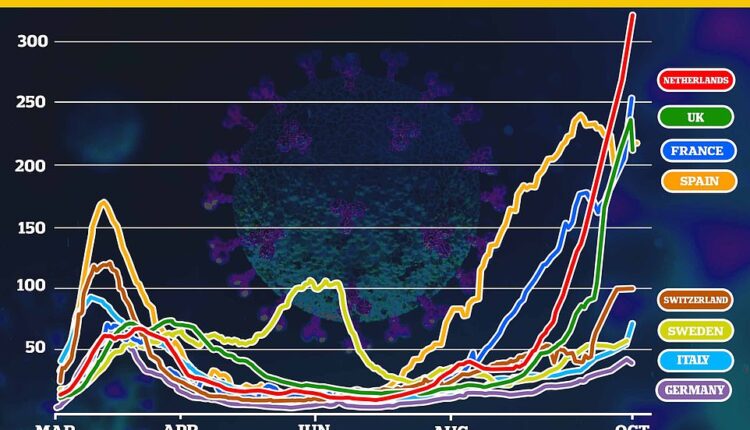 Donald Trump has urged European leaders to be ‘strong and vigilant’ after a ‘big spike in the China plague’, promising that the disease ‘will run its course’

The US president, who tested positive for the disease ten days ago and has been strongly criticsed for his virus response, promised that ‘vaccines and cures are coming fast’ in an early-morning tweet from Washington.

He also used the European figures to hit out at his critics, saying they were held up earlier in the pandemic ‘as examples of places that are doing well, in order to make the U.S look bad’.

Trump spoke as European leaders warned of a new round of coronavirus lockdown measures this week, just days after restrictions came into force in Spain, France and Germany.

Angela Merkel’s chief of staff said on Monday that a country-wide cap on the number of people allowed at gatherings and a ban on non-essential travel may be necessary if infections continue to rise.

Just hours earlier, an 11pm curfew came into effect on bars and restaurants in Berlin and Frankfurt after both cities breached a limit of 50 Covid cases per 100,000 people. Six other cities were also placed in emergency measures on Sunday, with Munich added to the list early Monday.

In France, Prime Minister Jean Castex warned that full-scale local lockdowns could be on the cards if curbs on bars and restaurants already in place in nine cities including Paris and Marseille do not bring infections down.

Mr Castex warned of a ‘strong second wave’ and that ‘nothing can be ruled out’ when it comes to the response, though said another full-scale lockdown of the country must be ‘avoided by all means’. Emmanuel Macron is due to give a nationwide address on Wednesday.

Meanwhile Spain and Italy were both due to bring in new restrictions this week, as protests took place in both countries against leaders’ handling of the pandemic. 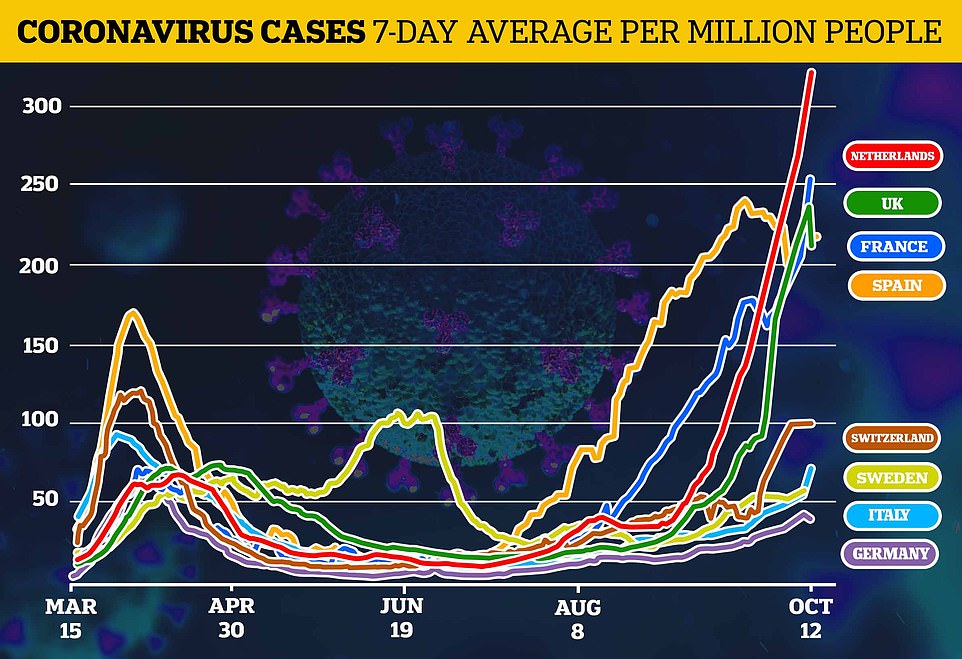 European leaders are threatening to bring in more coronavirus restrictions in an attempt to curb a second wave of infection, less than a week after the last round of measures went into effect (pictured, how coronavirus cases have begun rising in Europe in recent weeks, though increased testing means the numbers are not comparable to earlier in the outbreak) 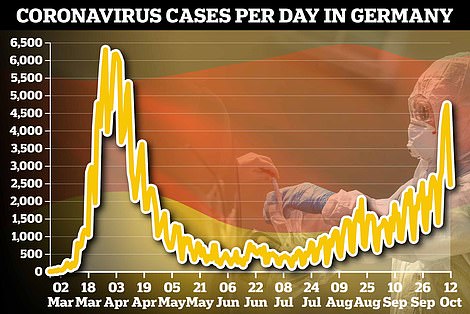 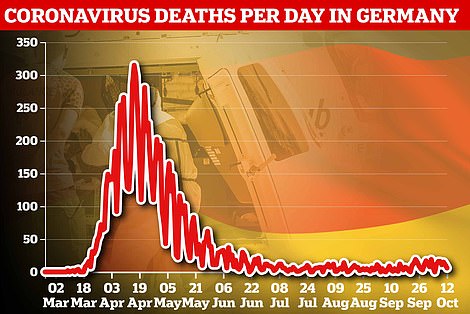 Measures now under consideration in Europe include…

Cases of coronavirus have been rising sharply across Europe in recent weeks as students return to schools and universities, though increased testing means the figures are not comparable to those seen during the first wave.

Deaths have remained far below their first-wave peak, suggesting that many of the new cases are moderate or mild infections that were missed during the first wave due to a shortage of tests.

However, an increase in demand for hospital beds and increased intensive care admissions suggests the disease is circulating more rapidly than it did over the summer.

There is typically a lag between countries putting measures into place and those measures showing in data.

Experts have previously criticised governments for implementing measures too quickly or all at once, making it unclear which ones are responsible for reducing infections.

In Italy, ministers are preparing to issue first round of lockdown measures, with an announcement possible today.

The new rules are set to include a ban on private parties, a limit weddings to 10 guests, and to impose social distancing in workplaces and ban amateur sports involving more than six people. 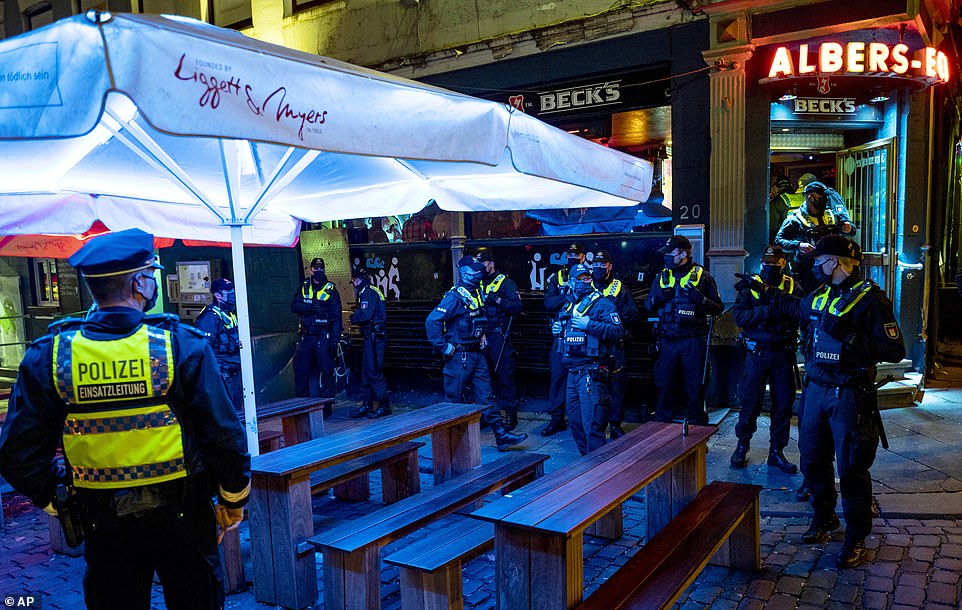 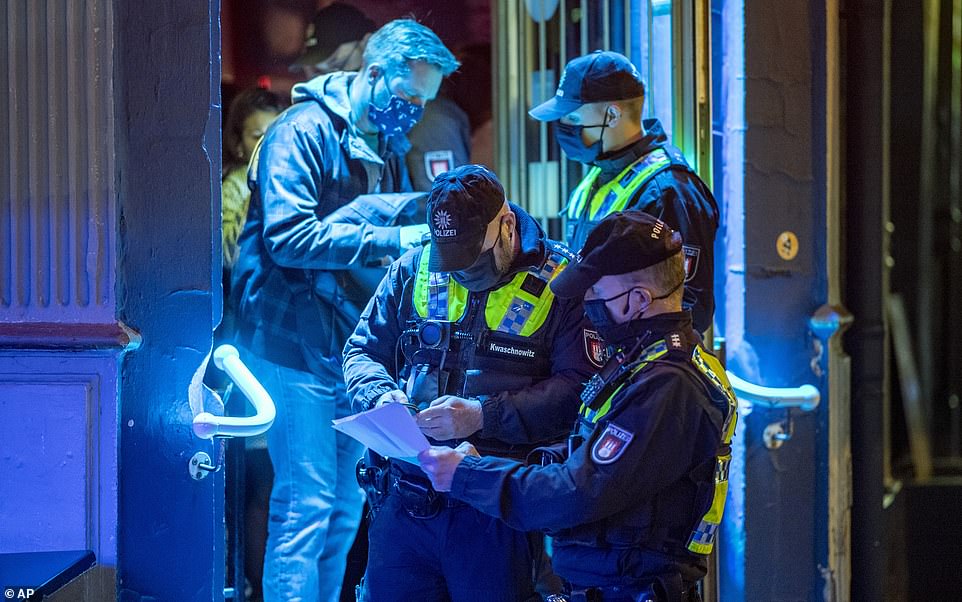 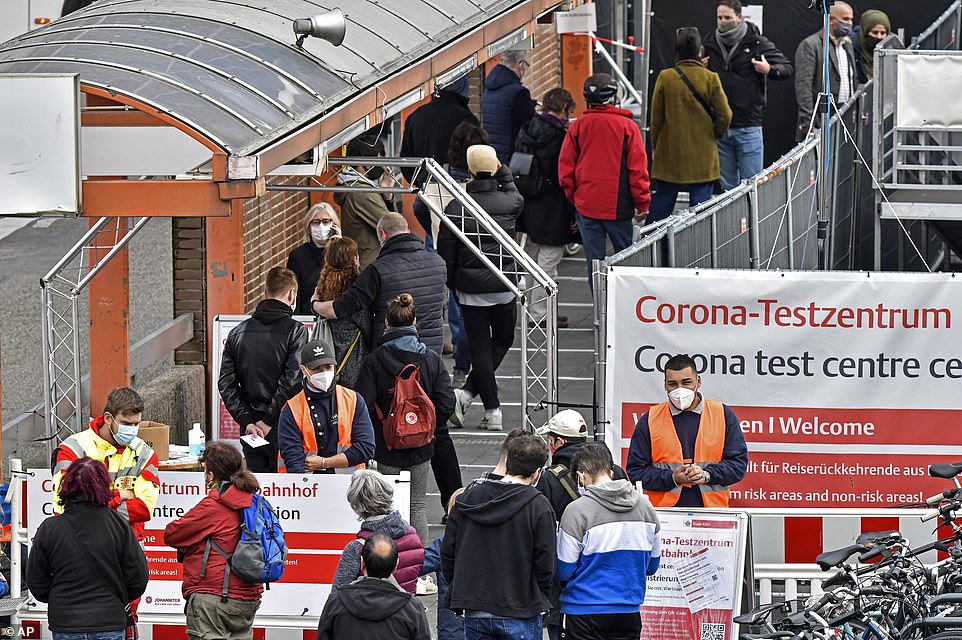 The government will also reduce to 10 days from 14 days the quarantine period necessary for people who have come into contact with an infected person, Health Minister Roberto Speranza said, in line with other countries.

In Spain, a report has warned that Barcelona could be just 15 days away from seeing infection levels similar to those in Madrid, one of Europe’s worst-hit cities.

Parts of the Spanish capital have already been placed back into full-scale lockdown – meaning people are confined to their homes except for essential business – with curbs put in place for other neighbourhoods.

Catalonia and Navarra announced new coronavirus restrictions on public life on Sunday, which includes work from home orders for businesses in Barcelona.

Universities were also asked to move their classes online during the next 15 days to reduce ‘social interactions’.

Capacity at cinemas, theatres and libraries will reduced to 30 percent while supermarkets will be limited to 40 percent, regional leader Maria Chivite added.

Meanwhile the Spanish royal family are taking part in a Los Reyes celebration in Madrid that has been massively scaled down from its previous military parades due to the pandemic.

Kings Felipe and Queen Letizia watched the parade, along with Princess Leonor and Princess Sofia. Just 500 troops participated, down from the usual 3,000. A reception at the Royal palace was also scrapped. 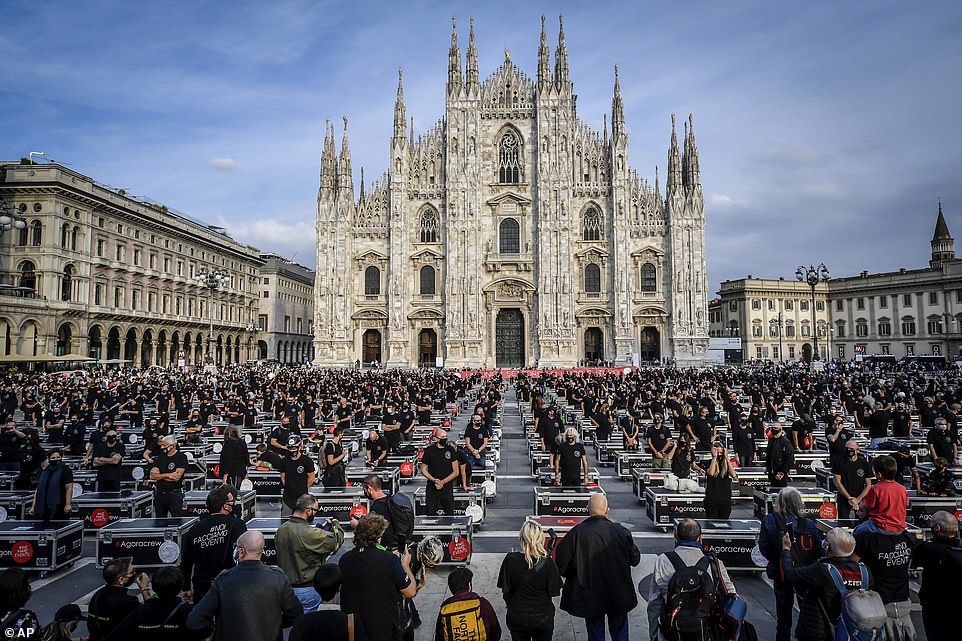 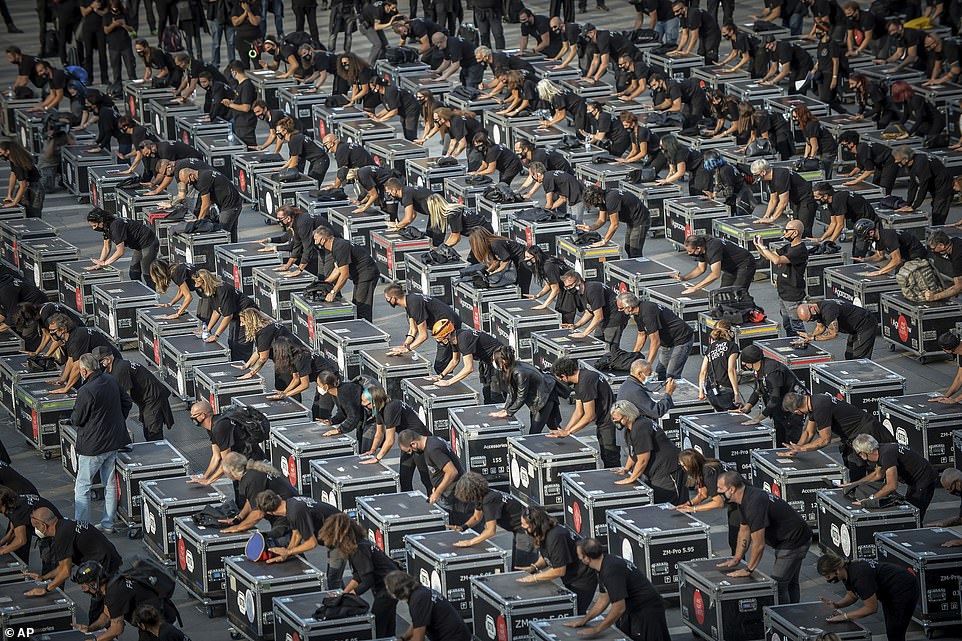 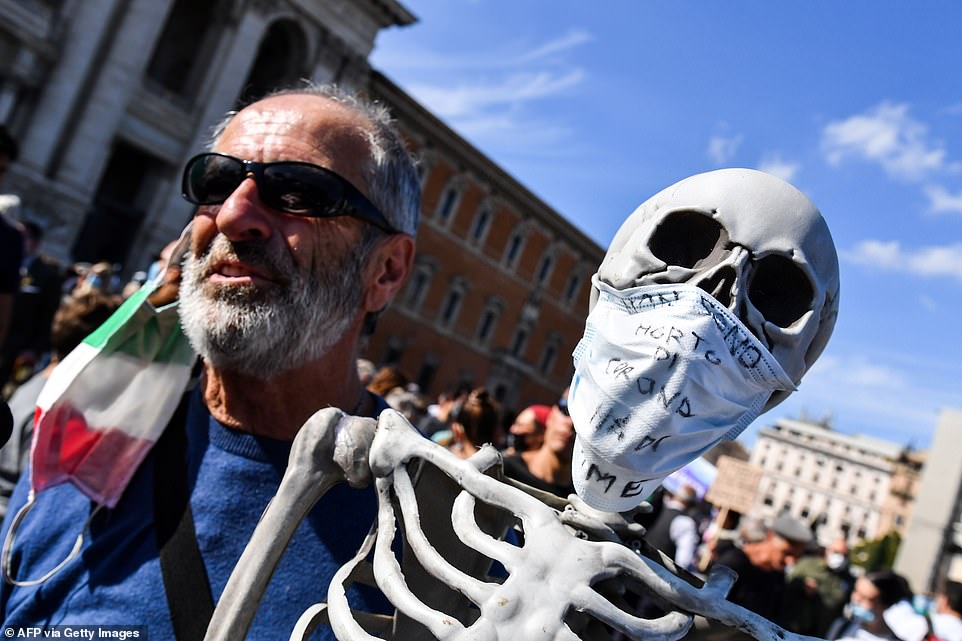 In the UK, Prime Minister Boris Johnson was set to announce a fresh round of restrictions on Monday that are expected to plunge large parts of the north of England back into a form of lockdown.

Bars and restaurants are expected to be shut in Liverpool, with Manchester, Newcastle, and Nottingham also at risk of being hit by additional measures.

The UK saw an average of 12,800 coronavirus cases reported per day last week, up 9 per cent on the previous week, when the total was 11,700.

Health officials have warned that hospital admissions have now exceeded the level they were at when the first national lockdown came into place, and may breach the previous peak within weeks.

France reported nearly 27,000 new virus cases on Saturday – an increase of 32 per cent on the previous day’s total, and the country’s highest total so-far of the second wave.

Another 16,000 new cases were recorded on Sunday, with the overall death toll now standing at 32,730.

Italy on Friday topped 5,000 new COVID-19 cases for the first time during its second wave, with Saturday and Sunday’s totals also above that mark. 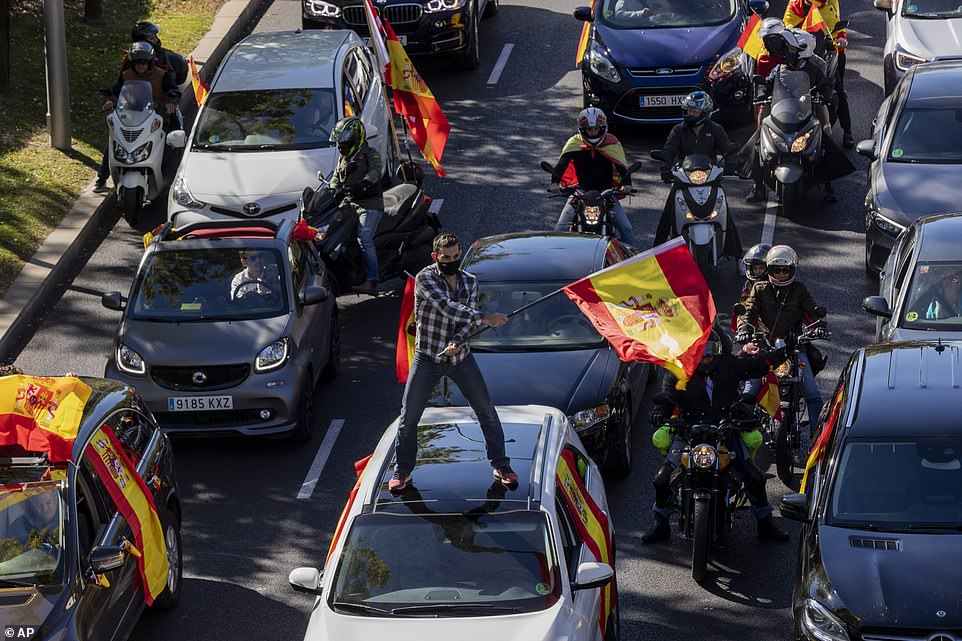 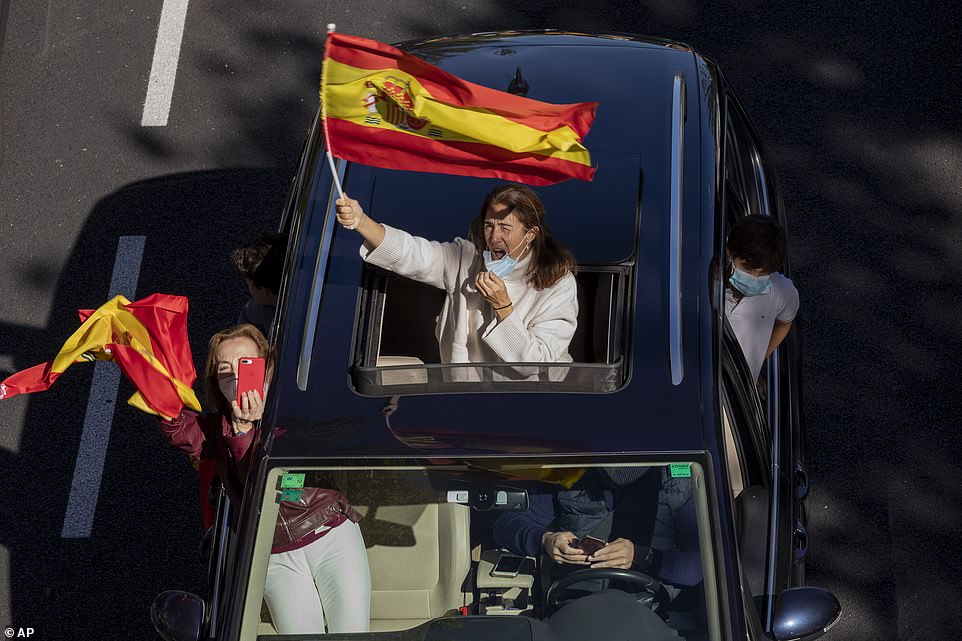 Deaths linked to COVID-19 are far fewer, normally below 30, compared with peaks above 900 per day around the end of March.

Spain, which had reported the highest number of coronavirus cases anywhere in Europe throughout August and September, has seen its figures fall slightly and then stabilise over the last two weeks.

The seven-day rolling average of cases stood at 10,100 on Friday, the last day for which data is available since Spain does not report cases at the weekend. That is down from the 10,500 cases it reported a week earlier.

Germany, considered to have implemented one of the best virus responses in Europe, reported 2,700 new cases on Monday – almost double the cases reported the same day a week ago.

The Netherlands continues to be the new sick-man of Europe, reporting new cases at a rate that far exceeds other European countries, even when comparing second wave figures.

Prime Minister Mark Rutte, who earlier shunned the use of face masks and boasted of ‘intelligent lockdown’ measures, warned the Dutch that they are facing a second national lockdown if things do not improve.

He chastised his countrymen for ‘disobeying the basic rules’ as the country reported more than 6,800 new cases on Sunday. That means the country now has 160 cases per 100,000 citizens, compared to the UK’s 59.

‘If [the situation doesn’t improve in the next few days, then we won’t escape [a second lockdown],’ he said. ‘The next 72 hours are important.’