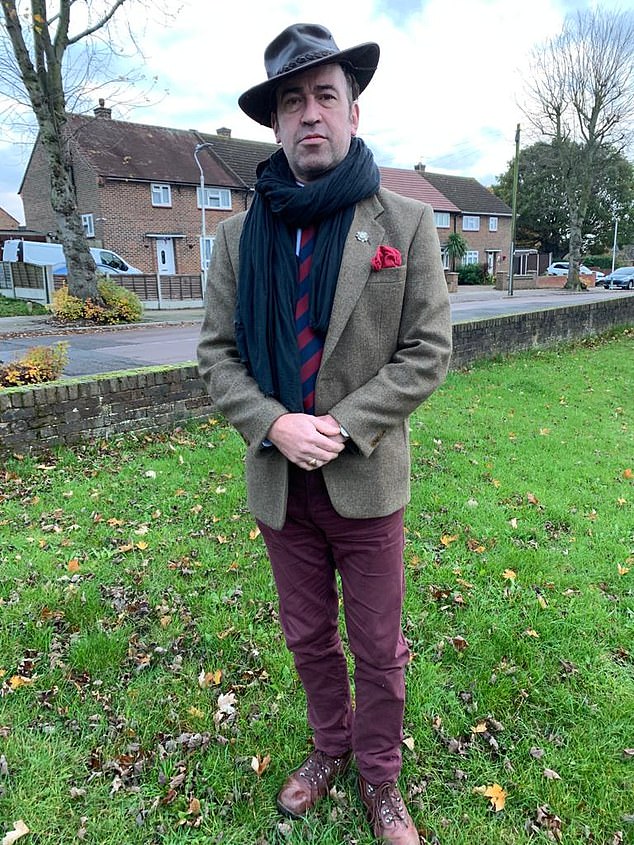 A former Scots Guard piper has accused the police of insulting the British armed forces after he was filmed being pushed to the ground by an officer while attempting to march with fellow veterans to the Cenotaph memorial to lay a wreath.

Ben Buckland, 47 was seen stumbling before falling to the ground in a video that went viral, provoking uproar among veterans and members of the public.

Mr Buckland, from Romford, East London, told MailOnline: ‘All we wanted to do was honour the memory of our fallen brothers who could not be with us.

‘The police behaved in a despicable way and have insulted the memory of all those who have proudly served this nation.’

He fumed: ‘I was playing the bagpipes and leading a line of veterans. I want to know why I was arrested for this and assaulted? How can this be a crime?’

Ben Buckland, 47 was seen stumbling before falling to the ground in a video that went viral, provoking uproar amongst veterans and members of the public 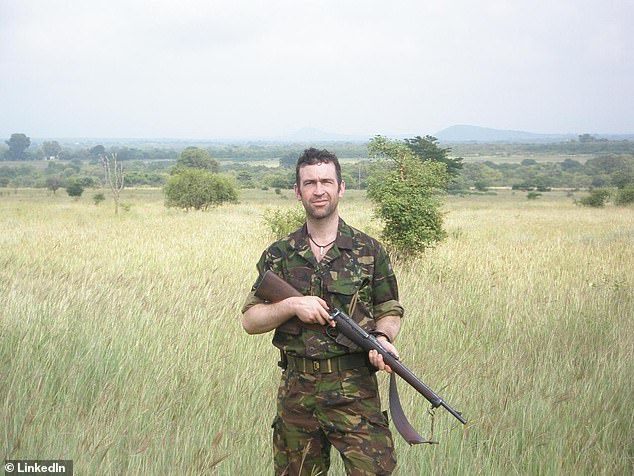 A bagpiper who was filmed being shoved to the ground by a Metropolitan Police officer near the Cenotaph on Remembrance Sunday has been named as Ben Buckland, a UKIP member and founder of an anti-poaching unit in Africa

Mr Buckland also hit back at a separate video which emerged, indicating that he orchestrated the incident. In it, he brags ‘sometimes you have to sometimes create to get what you want’ and admits that ‘I actually did it. I provoked them.’

Mr Buckland claimed: ‘I categorically deny that I orchestrated any of it.

‘The video was being filmed by a member of the Russian Secret Services and I said all that because I didn’t want to show the enemy that I was weak.

‘That is one of the first things you learn in the military-never show any weakness. I didn’t want them to know that I had been attacked by the police.’

The former piper revealed that he gathered with around 30 veterans shortly before mid-day and organised them in rank and file so that they could lay a number of wreaths they had brought with them.

He added: ‘I organised my troops because we didn’t want to appear as a rabble when going to lay our wreath. We were marching in a disciplined way, proudly wearing our medals.

‘I led the lads and we came up before a line of police. I marched in between them and the police playing my pipes and as I countermarched, an officer pushed me to the ground.’ 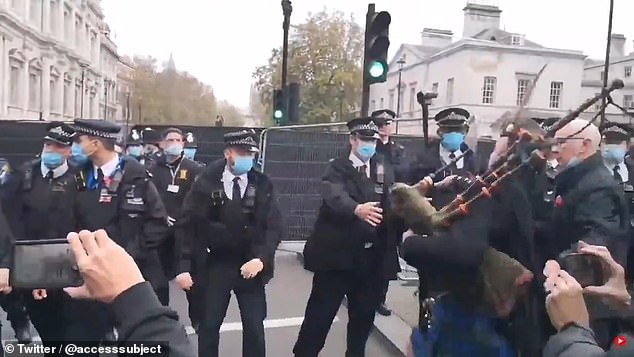 Mr Buckland said today: ‘The police behaved in a despicable way and have insulted the memory of all those who have proudly served this nation’ 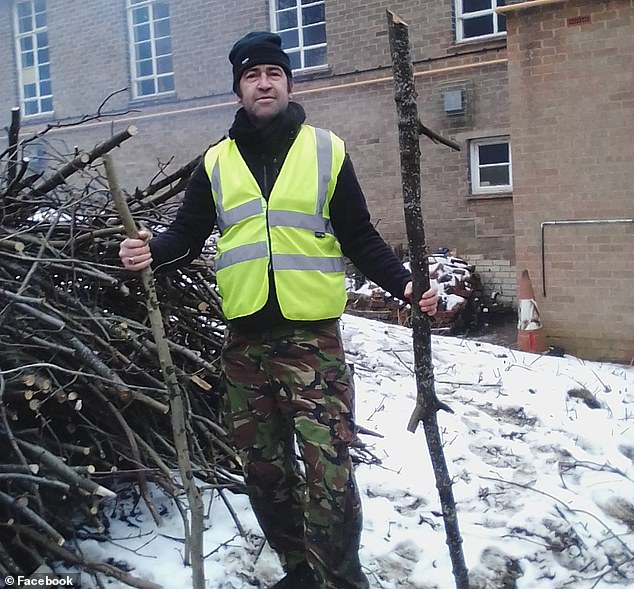 Mr Buckland stood as a councillor in the London Borough of Havering in 2018, having been active in the local Harold Hill community 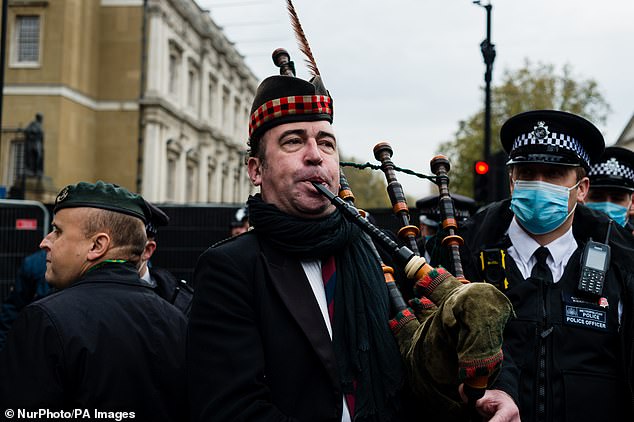 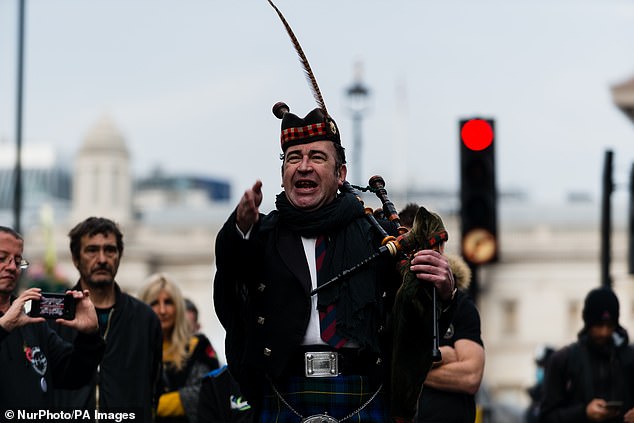 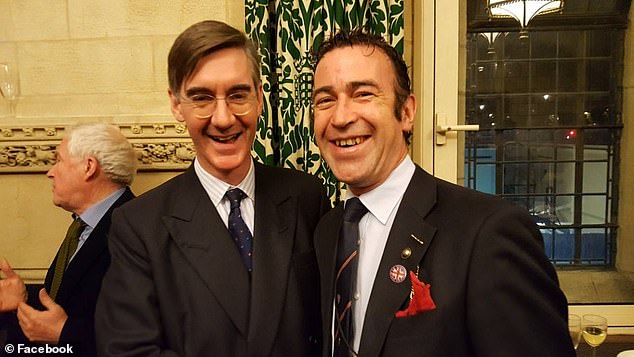 Ben Buckland met with Jacob Rees-Mogg in 2018, 10 years after playing the bagpipes atop the UKIP battle bus during the 2008 London Mayoral elections

The former Scots Guard claimed that he was left with mild concussion and bruising to the head.

Mr Buckland said: ‘I’m a decorated soldier and didn’t deserve to be ambushed like this. It was a surprise attack from my right flank and if I’d seen it coming, it would have been a very different story.

‘My fellow veterans are incensed by what happened and my phone hasn’t stopped ringing with messages of support. The officer who attacked me should hang his head in shame.’

Mr Buckland revealed that after being pushed over, he was helped by fellow veterans, who became enraged and remonstrated with police.

They were eventually allowed to pass through the police line and lay their wreath at the Cenotaph, as Mr Buckland played the ‘Lament for the Fallen.’

Mr Buckland told MailOnline that he was picked up by police around three hours after the pushing incident, while he was still in the Whitehall area. He was taken to Walworth Police Station in South London, on suspicion of common assault on an emergency worker. 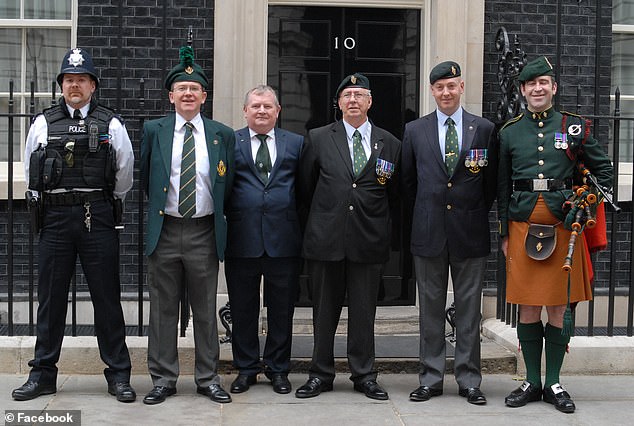 Mr Buckland (far right) served in the Scots Guards for 11 years, from 1991 to 2002, before working in security and later setting up an anti-poaching unit in Africa 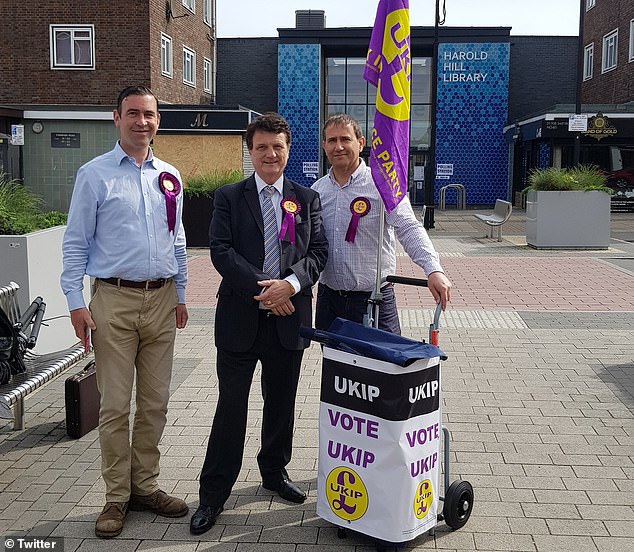 The piper has now been identified as Ben Buckland, pictured left with former UKIP leader and founding member Gerard Batten in 2018. Mr Buckland stood for election in Havering, East London, but failed to secure a council seat after receiving 479 votes 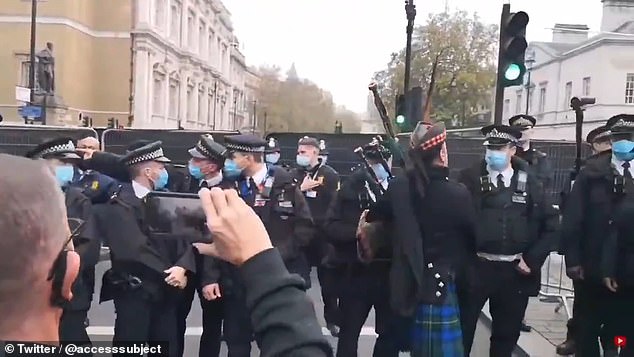 Police revealed that he was released pending investigation.

Mr Buckland said that he did not return to his Romford home until 1am and had spent most of Monday sleeping.

He said: ‘I’ve been left exhausted by all of this. I already suffer from a number of ailments and this has just made my condition worse.

Piper: I’ll tell you this for the telly. I actually did it. I provoked them.

Piper: Do you honestly think I give a f*** about being thrown over? I don’t.

Filmer : They didn’t have to do it. You were just passing by. You didn’t go towards them. You were going past them.

Piper: It’s all in the movement right. Because all I was doing was turning. It only takes a few inches to be closer to them to make them react.

When you do that and then they react, because unfortunately we had to do it that way. But that’s how we managed to succeed to get here. They weren’t going to let us down. They were not going to help us

‘The police behaved in a cowardly way. They waited until most of the other veterans had gone and then took me away, accusing me of assault.

‘If all the other veterans had been there, they would not have had the courage to do this.’

Mr Buckland did not want to be drawn into any details about his military career but admitted that he had served in Northern Ireland.

He said: ‘It’s not relevant but I’ve got the service medals to prove my commitment to my country. I’m disgusted by the way that I’ve been treated but am glad that we were able to complete our mission and lay a wreath at the Cenotaph.’

Earlier, his blasted the ‘disgraceful police after the former UKIP candidate was arrested for assault following a video that showed him bragging he ‘provoked,’ officers to shove him.

Mr Buckland’s partner Gina Bailey said he had been left distressed by the incident and felt humiliated at the way he had been treated.

She revealed that he was a piper in the Scots Guard who had toured Northern Ireland at the height of the troubles.

Ms Bailey fumed: ‘He’s an army veteran who has served his country and it’s a disgraceful the way the police dealt with him.

‘Ben is a true patriot who put his life on the line for this nation. And it’s shocking that he gets pushed around like a common criminal on Remembrance Sunday.’

Ms Bailey revealed: ‘Ben’s been sleeping since he got in and feels very tired and upset. I didn’t really speak too much to him about what happened because he was in a police cell for several hours and just wanted to go to bed when he got in.’

In 2018 Mr Buckland was pictured meeting Jacob Rees-Mogg, he stood for a seat as a councillor in the London Borough of Havering that same year, but lost after getting just 479 votes from locals.

He served in the Scots Guard division of the British Army throughout the 1990s, before working in security jobs and going on to set up anti-poaching unit Animal Guards in 2015.

The Scots piper is a long-serving member of UKIP, having played the bagpipes atop the party’s election battle bus during the London mayoral election in 2008.

In the new video of the piper, Mr Buckland – who was wearing a kilt and a military beret – says: ‘I actually did it. I provoked them.

‘Do you honestly think I give a f*** about being thrown over? I don’t.

‘It’s all in the movement right. Because all I was doing was turning. It only takes a few inches to be closer to them to make them react.’

YG, Nipsey Hussle’s “FDT” Is No. 1 on iTunes After Biden Wins