Donald Trump Jr. has accused Facebook of election interference for limiting the spread of the New York Post story which claims Joe Biden met with a Ukrainian businessman while he was Vice President, saying it needs to be fact-checked first by its chosen third party before they will allow people to share it more online.

The announcement came on Wednesday without any explanation from the social media giant and before Biden had even denied it.

It thrusts into the spotlight again the exorbitant power Facebook has not only over the circulation of news but also over politics and the spread of information, and comes at a particularly tense moment given the Presidential election is in just three weeks.  It also raises the question of who Facebook’s fact-checkers are and what qualifies them to arbitrate the truth.

‘While I will intentionally not link to the New York Post, I want be clear that this story is eligible to be fact checked by Facebook’s third-party fact checking partners. In the meantime, we are reducing its distribution on our platform,’ he said.

Donald Jr. was among the first to criticize it but others, including Republican Senator Josh Hawley, are now demanding answers from Facebook. 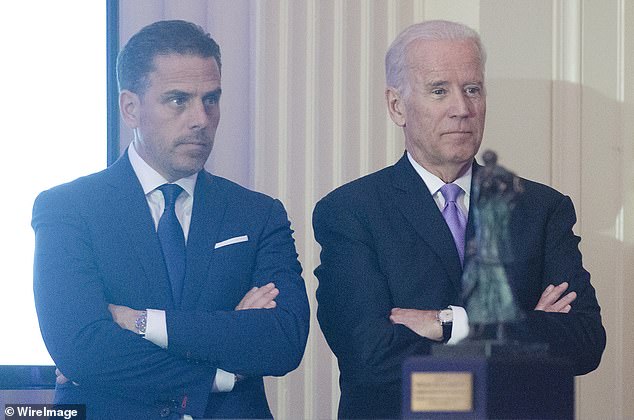 Hunter and Joe Biden. The Post story suggests that Joe, while Vice President, had a meeting with a Ukrainian businessman after being introduced to him by Hunter, eight months before pressuring Ukrainian officials to fire a prosecutor who was investigating the businessman’s firm 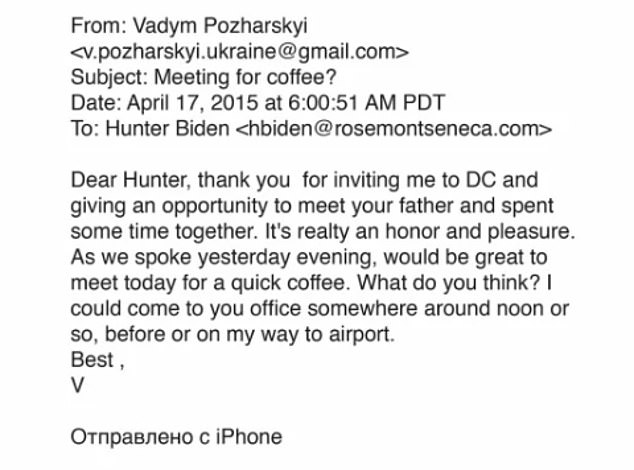 ‘Are you kidding me? After all the lies that they pushed about us and Russia collusion for years… now there’s credible evidence against the Bidens and they eliminated on their platform?

‘Give me a break big tech has way too much power and it needs to be stopped?

‘Joe said he never met these people and here’s an email refuting then why don’t they actually fat check in rather than just taking it off their platform.

‘They know it will hurt Biden so they will do what they can to cover it up, that’s what they do,’ he fumed.

In an open letter to Facebook, Sen. Hawley said: ‘It has come to my attention that this news report—one clearly relevant to the public interest—has been censored on Facebook.

‘The seemingly selective nature of this public intervention suggests partiality on the part of Facebook.

‘And your efforts to suppress the distribution of content revealing potentially unethical activity by a candidate for president raises a number of additional questions, to which I expect responses immediately.’

Facebook has been accused of election interference for making the decision

Others accused Facebook of protecting Biden, the Democratic Presidential Candidate, while allowing unflattering stories about President Trump to spread.

Facebook has not responded to inquiries about why it has reason to doubt the story or squash it.

It is also unclear what the extent of the circulation reduction is.

WHO ARE FACEBOOK’S FACT-CHECKERS

Facebook ‘partners’ with more than 30 fact checking organizations but nowhere does it provide a list of who they are or what their political leanings are.

All it says is that they belong to the International Fact-Checking Network.

Among them is The Daily Caller – a right-wing outlet. Snopes had been working with them but ended their partnership in 2019.

They are tasked with returning a decision on whether or not a piece of content or article is truthful.

After that, the company can still decide to overrule their decision and has in the past, notably in favor of outspoken Conservatives in an apparent effort not to appear as though they are favoring the Left.

The New York Post is historically Conservative and the source for the story was Rudy Giuliani, one of President Trump’s closest aides.

He gave the Post a trove of emails in which Ukrainian businessman Vadym Pozharskyi thanked Hunter for introducing him to his father, then the Vice President.

Within months of the 2015 meeting that Pozharskyi refers to in the emails, Biden had successfully pressured Ukrainian officials to fire a prosecutor who was looking into Pozharskyi’s business.

At the time, Hunter was being paid $50,000-a-month by Pozharskyi’s gas firm to act as a consultant, despite the fact he’d had no experience working in the gas industry.

After the Post story emerged on Wednesday, the Biden campaign said he had never met Vadym Pozharskyi.

Biden has repeatedly insisted he was never influenced by Hunter’s dealings with Ukraine when he was Vice President.

The emails were taken from a damaged laptop which was left, mysteriously, in a Delaware tech repair shop.

It had a Beau Biden Foundation sticker on it and the person who dropped it off – who has not been identified – never collected it again.

The store owner looked through the computer’s hard drive and not only found the emails but also found a video of Hunter Biden, a self-confessed drug addict, smoking crack while engaging in a sex act.

After Facebook’s announcement on Wednesday, many asked if the company – which is notoriously left-leaning – would have applied the same type of scrutiny to the New York Times or any other Democrat-friendly media outlets.

Earlier this year, when the Times published an expose about Trump only paying $750 in federal income tax for two years, the story spread like wildfire on social media.

In recent years, he has been attacked on both sides of the aisle for occupying too much of the tech industry and market while resisting oversight boards.