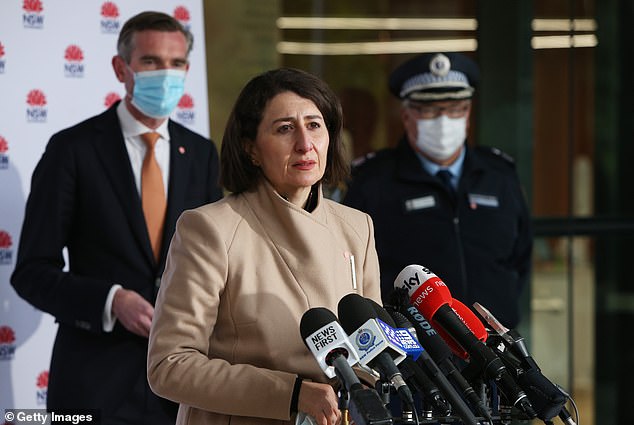 Premier Gladys Berejiklian has hit back at a reporter who demanded she plunge Sydneysiders into a tougher lockdown and bombarded her with relentless questions about whether restrictions would be eased by August.

The fiery clash with Sky News journalist Andrew Clennell came during a press conference on Thursday morning after Ms Berejiklian announced 65 new cases in the city.

‘Premier, you have locked us down for three weeks and now you are look locking us down for another two weeks,’ Mr Clennell said.

‘What is to say it won’t be another two weeks on top of that? When are you going to acknowledge it is time to lock it down harder to get rid of this thing?’

Ms Berejiklian replied and said the government is ‘never afraid’ to make ‘difficult decisions’ to keep the community safe.

Unsatisfied, the reporter interrupted her and shouted across the floor: ‘It’s the time now’.

Ms Berejiklian paused and said: ‘You’ve asked a very important question and I’d appreciate you allowing me to finish my answer.’

She went on to explain the current lockdown rules have been set following the advice of top medical experts.

‘We rely on the best health advice available and the people of New South Wales know given our track record, that we are never afraid to take the difficult decisions to keep out community safe,’ she said. 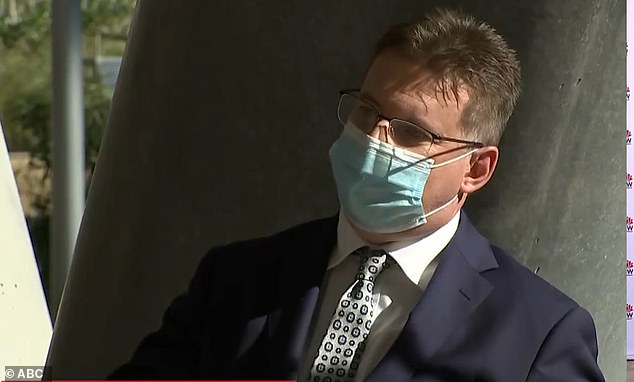 ‘The best health advice we have and I will allow Dr Chant to expand on, that we need everybody to stay the course. The rules we have in place are there for a reason.’

Current lockdown rules allow people in Greater Sydney, Wollongong, the Central Coast and the Blue Mountains to meet up with one other person outdoors.

There is no curfew for residents, and no limitations on the amount of time people are allowed to spend outside – without a mask on.

But Mr Clennell piped up again and pointed out that the number of new cases announced each day are ‘not shifting’.

Again, the premier hit back and said that if the highly contagious Delta strain was ripping through Sydney, daily case numbers would be ‘doubling, tripling after a day’.

‘Had we let this virus rip, the case numbers and those infectious in the community would have increased what with call exponentially.’

‘We are not seeing that trend. What we are seeing at the moment is the start of a stabilisation proceed.’

Ms Berejiklian acknowledged that the daily case numbers have been fluctuating between about 65 and 112 over the past week, but said that is to be expected.

She anticipated a higher number on Friday because there were 28 people infectious in the community within the last 24 hours.

As the leader started encouraging NSW residents to ‘stay the course’ and follow the rules, Mr Clennell said: ‘With respect, the best health advice got us a five-week lockdown.’

‘That is what the best health advice has got us, hasn’t it?’ he asked.

The premier defended the government’s decision to lock Sydney down on June 26 and explained that if there was no lockdown, there would be thousands of cases in the community.

‘We took the action we did when we did to avert medical and health disaster, and we stick without decisions because they’re based on the best health advice.’

She also said that the government would not hesitate to impose further restrictions on residents if the situation worsens.

A volley of questions and answers ensued where Mr Clennell tried to get the premier to say whether Sydney would be out of lockdown by the end of July.

Eventually, the fed-up premier said: ‘I wish I had a crystal ball.’

‘I wish I knew where we’d be in two weeks’ time, but I do know that a large component of where we’ll be in the next two weeks depends on all of us.’