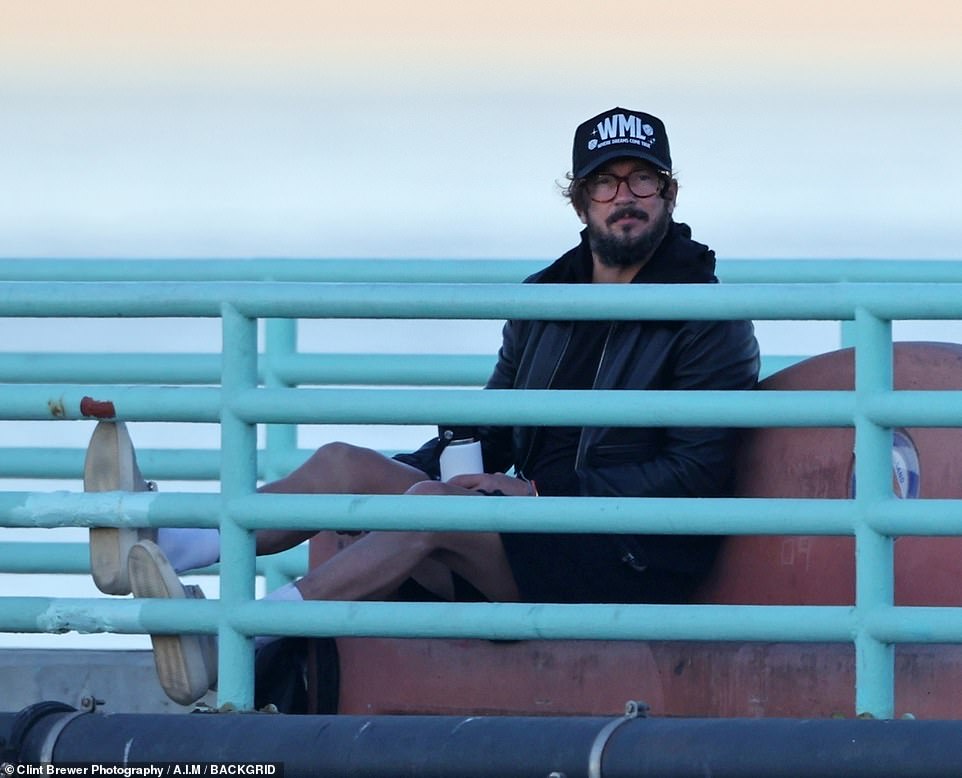 Disgraced Hillsong pastor Carl Lentz was spotted spending some time alone in Southern California ahead of the weekend, weeks after spending the holidays away from his family in rehab.

The 42-year-old ousted megachurch leader appeared to be taking time to reflect early Friday morning as he watched the sunrise from a bench at Manhattan Beach pier all by himself.

Lentz, who rose to fame as a celebrity pastor with close ties to Justin Bieber, looked downcast and pensive as he sat and gazed out at the ocean. Sporting a leather jacket over a black hoodie and shorts, he was almost unrecognizable due to his scruffy, unkempt beard.

At one point, he took out a pen and notepad and scribbled down some notes. He also brought along his laptop which he checked a few times before heading back to his $18,000-a-month rental home where he relocated after he was fired from his church in New York.

Lentz politely spoke to photographers as he walked back to his car. He refused to comment on friend Justin Bieber becoming a pastor, saying: ‘I have nothing to say, my man. Sorry.’ 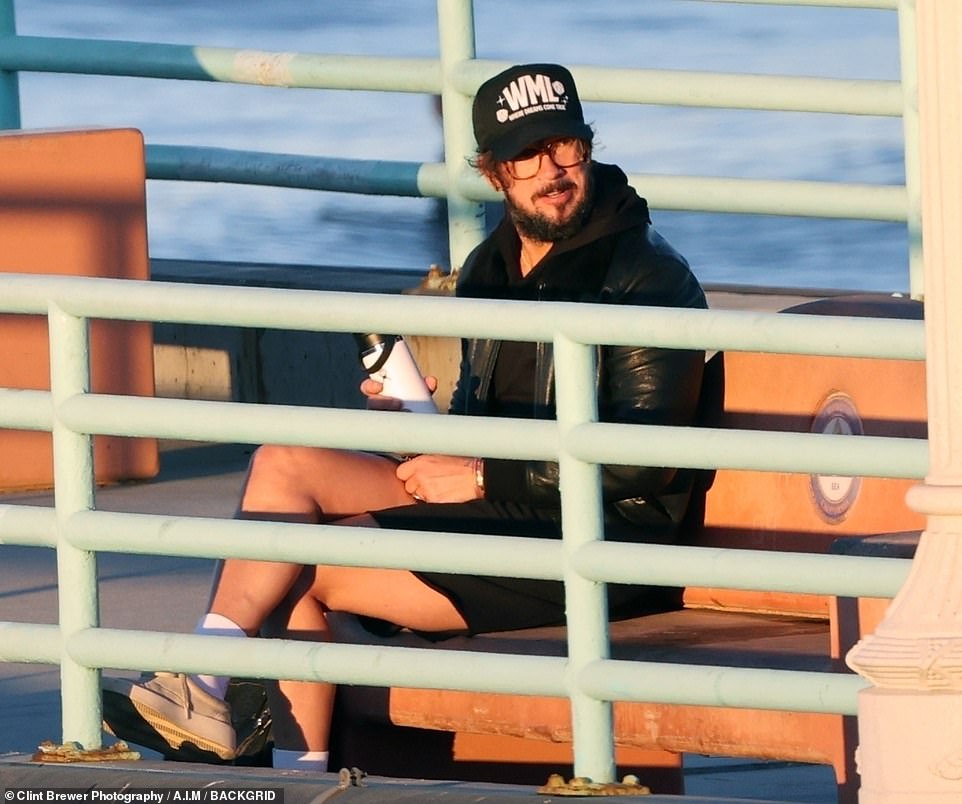 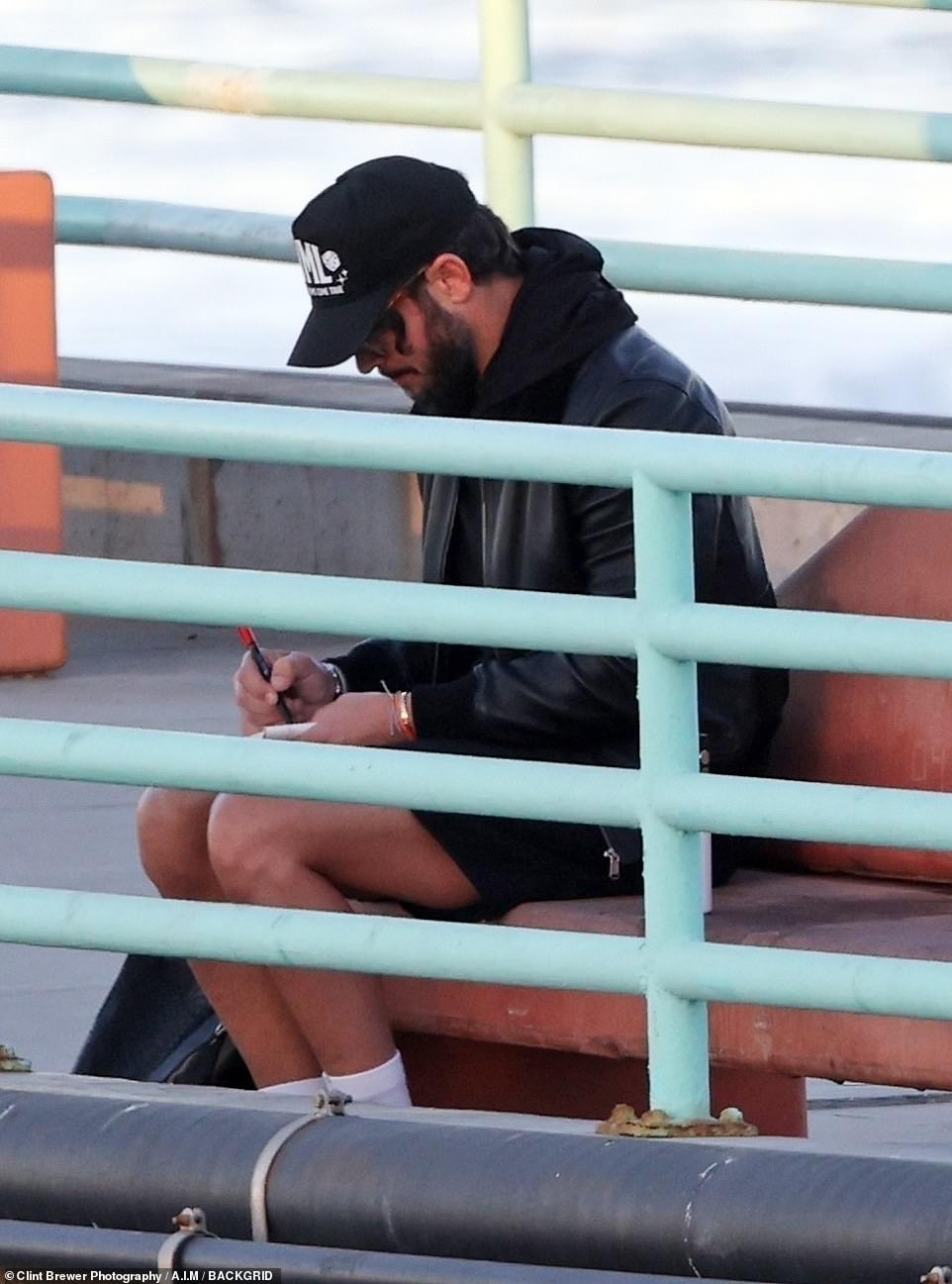 When complimented on his new look and growing beard he replied: ‘Thanks, It’s got some grey in it.’

Earlier this week Lentz was spotted cozying up to his Australian wife Laura while running errands in Los Angeles.

He looked a little worse for wear again with his hair grown out as he headed out to Target in Redondo Beach on Sunday.

Laura, whom he married in 2003 and with whom he shares three kids, was seen wearing her wedding band on her finger and her arm around Carl’s for the outing.

The couple has put on a united front since Carl, who worked with Hillsong for 10 years and was the head pastor of its New York City chapter, was fired in November for having an affair and he admitted to cheating on his wife.

It comes after Lentz entered a treatment program in early December to treat mental health issues following his firing, at an outpatient facility that specialized in ‘depression, anxiety and pastoral burnout,’ according to People Magazine. 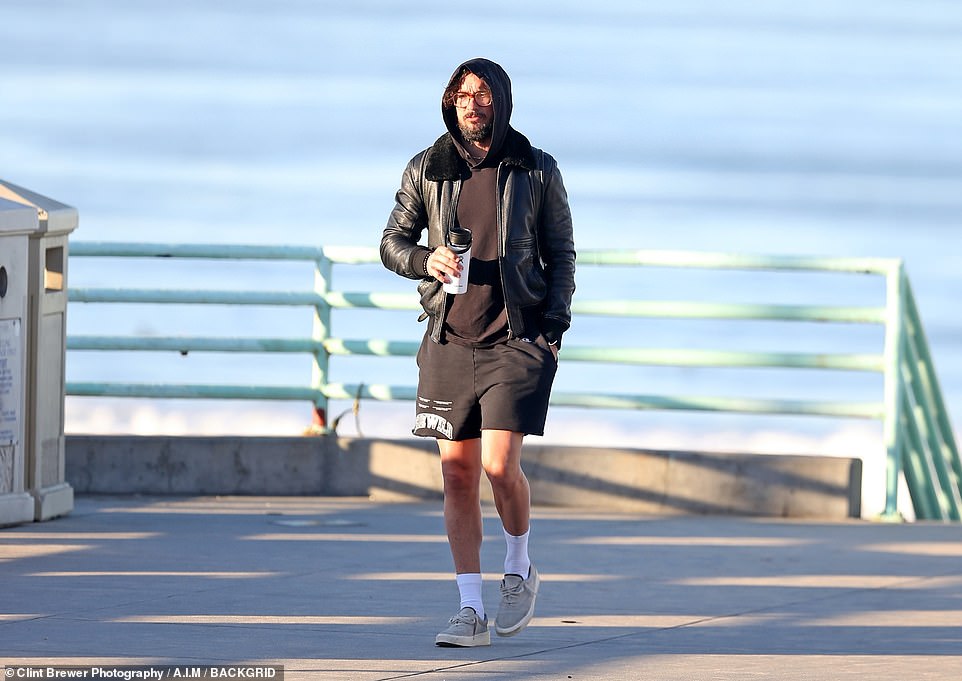 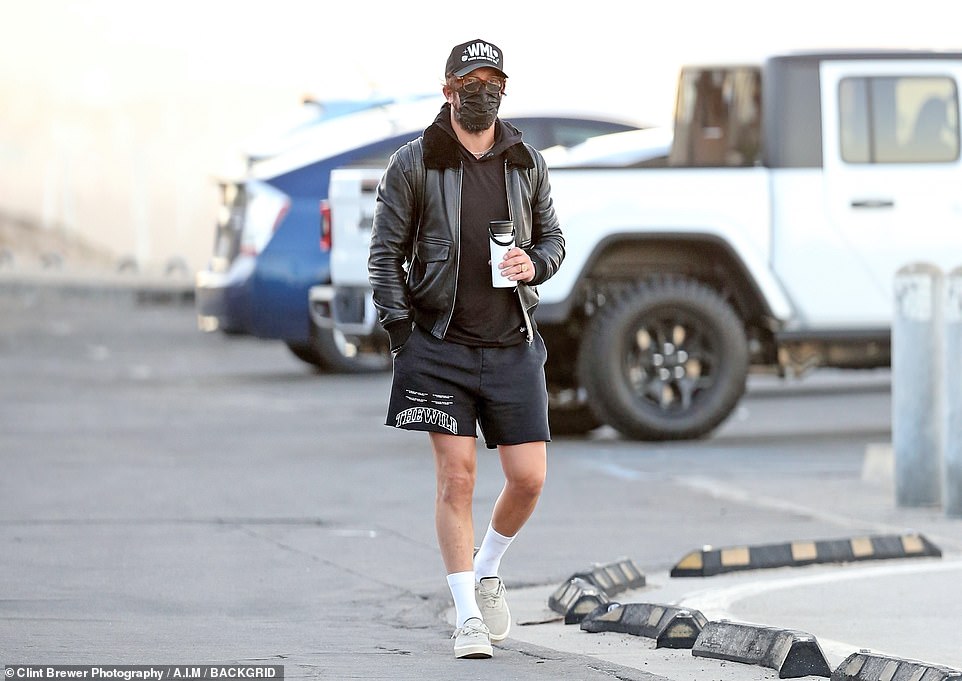 ‘He wants to be better for his family and is dedicated to doing the work,’ a source said to the magazine at the time. ‘His family is supporting him and hopes their privacy will be respected on this journey.’

They added: ‘He has no ill will towards the church and recognizes that they needed to take some course of action to address his missteps.’

During his 10 years with Hillsong, Lentz adopted a hip manner of dress and fostered friendships with young celebrities to help boost the church’s image, even as he publicly said that homosexuality and abortion were sins.

But a statement from Hillsong founder Brian Houston on November 4 announced he had been removed form his post over ‘ongoing discussions in relation to leadership issues and breaches of trust, plus a recent revelation of moral failures.’

‘They have a heart for people and we are confident that after a time of rest and restoration, God will use Carl in another way outside of Hillsong church,’ the statement continued. ‘In terminating his tenure, we in no way want to diminish the good work he did here.’

Lentz was the pastor of Hillsong’s New York branch, though he appears to spend plenty of time on the West Coast as well.

The scandal appears to have impacted his relationship with Bieber and his wife Hailey, as both unfollowed him on Instagram after having spent extensive time with him. 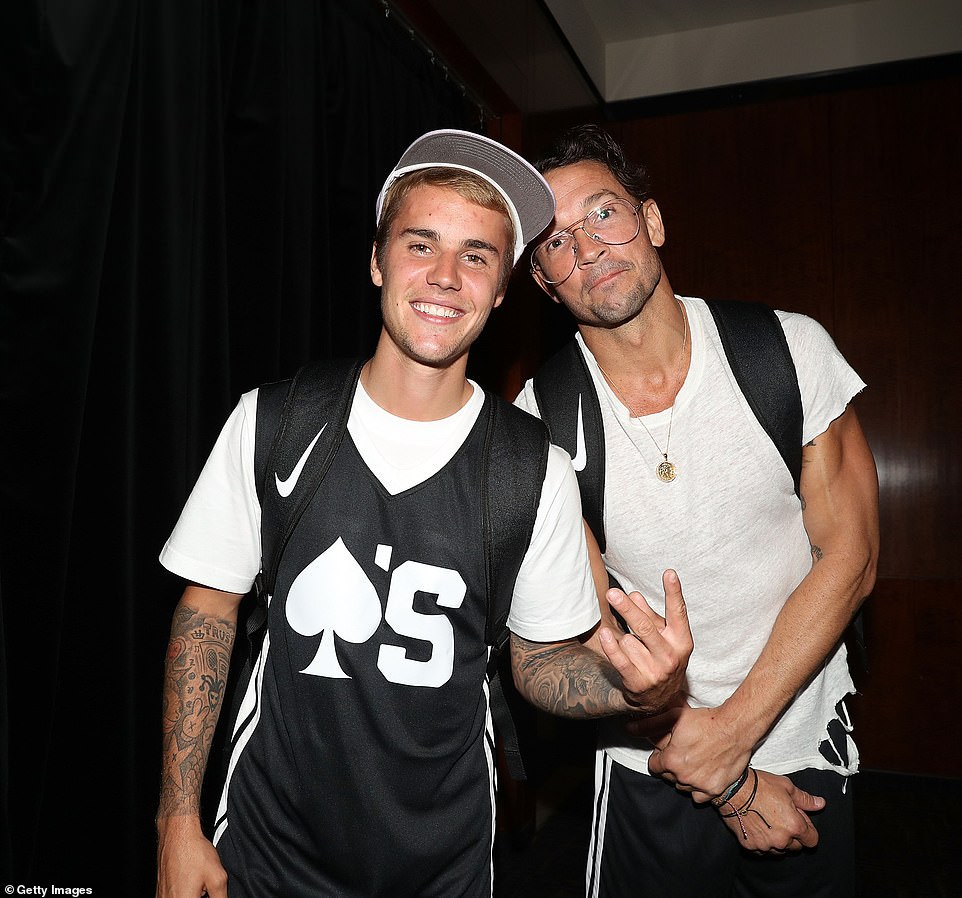 Playing the part: Lentz adopted a hip style of dress and surrounded himself with celebrities like Justin Bieber, though he publicly called homosexuality and abortion a sin; seen in 2017

Last year, Lentz baptized Bieber and even presided over his wedding.

In December, DailyMail.com exclusively reported on audio of Houston addressing church leaders and top donors in which he claimed Lentz had ‘more than one affair’ leading up to his firing.

He called them ‘significant’ and added that some ‘bad moral behavior had gone back historically,’ though he wasn’t referring to these recent affairs, which were apparently consensual.

Shortly after the scandal broke, New York City–based designer Ranin Karim claimed that she had carried on a months-long affair with him.

The Egyptian and Palestinian designer says the relationship began after a chance meeting in New York’s Domino Park. Karim said the pair had begun their ‘love story’ against the backdrop of Covid-19 and found comfort in each other during the strange time. 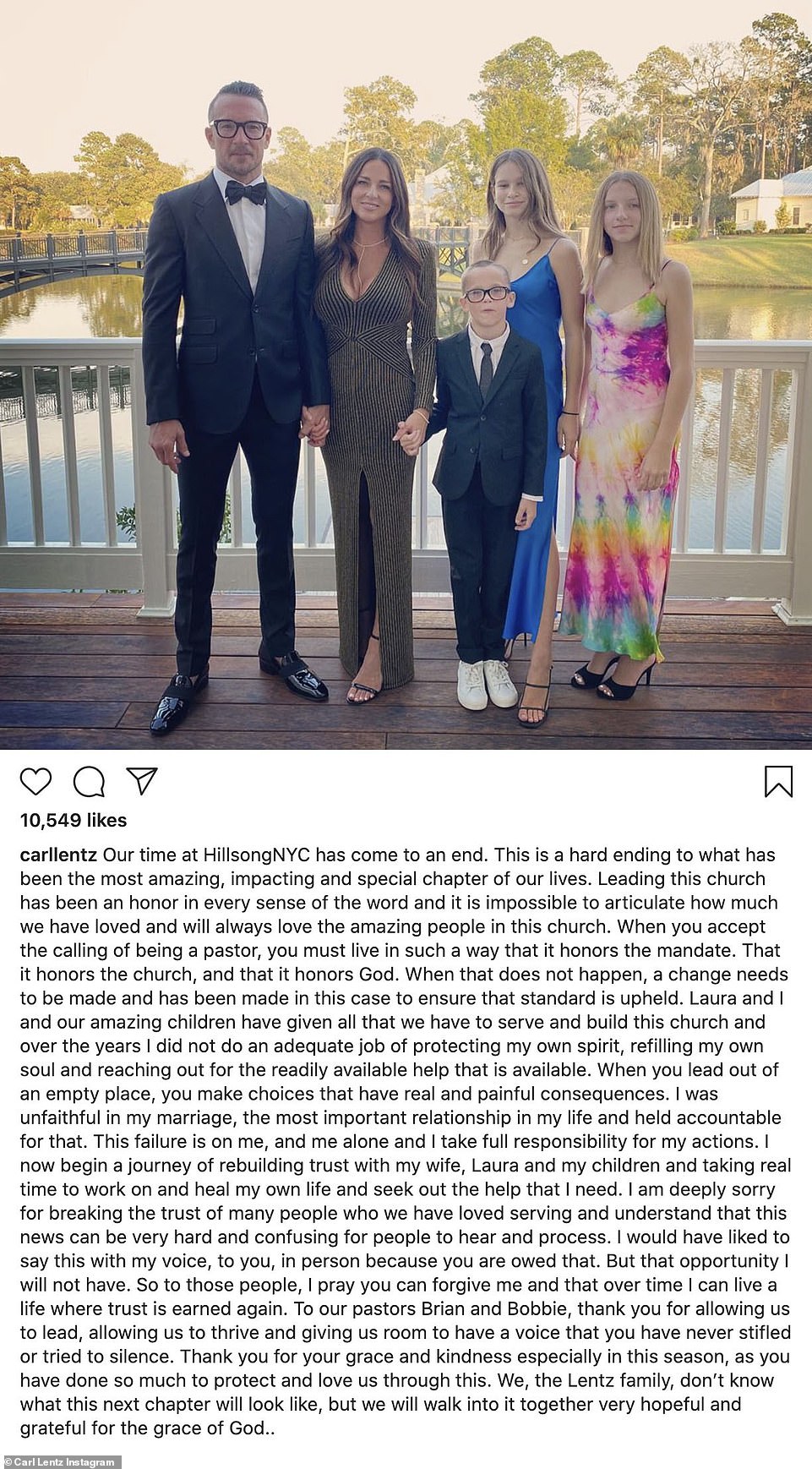 The 34-year-old claimed Lentz would ‘brag about his BMW’ and talk about his friendship with pop star Justin Bieber.

Lentz had baptised Bieber at the church and also brushed shoulders with other celebrities along the likes of Drake, Vanessa Hudgens, and various NBA stars.

According to her, Lentz only ever gave his first name and claimed to be a sports agent.

When Karim found out Lentz was married, she claims she told him to end their fling.

‘When I found out he was married, I told him repeatedly ‘go back to your wife, go back to your family,’ but he kept turning up in the lobby of my apartment block with bottles of Clase Azul tequila for us to drink,’ she claimed.

‘He said he felt bad for what he was doing to his wife, that she was an amazing, good woman, that he had never done it before but his marriage wasn’t perfect.’

Karim believes Lentz was looking for a way out of his ‘boring’ marriage.

Lentz’s wife, Laura, uncovered the affair because Lentz had synced his iPhone messages to his iCloud. She discovered messages from Karim to him on his work computer while in the Hillsong offices, surrounded by co-workers.

Despite the alleged affairs, Lentz’s wife Laura appears to be sticking with him, and his family is reportedly supportive.

Apophis will safely move Earth TONIGHT – however consultants warn it might…