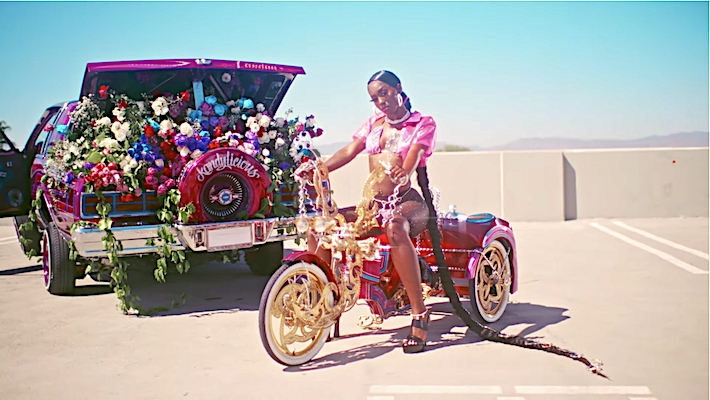 Alabama rap sensation Flo Milli continues her breakout with the double video for “Send The Addy/May I” from her debut album, Ho, Why Is You Here? A relative unknown at this time last year, the 19-year-old Flo Milli has since bossed up in a big way, going from underground rookie to XXL Freshman contender, punctuating her rise with the viral fan-favorite project full of infectious bops and playful trash talk.

The new video reflects the rapper’s increased stature, opening with a flashy scene of Flo Milli rapping on the hood of an elaborately decorated lowrider in braids and knee-high boots and showing off her nameplate bamboo earrings. The bulk of the video is taken up by the “May I” video, filling the trunk of another lowrider with opulent floral arrangements as Milli sits astride a similarly bedecked lowrider bicycle. The final scene is a throwback to the 2000s, as the car club circles up to set the stage for a parking lot dance-off.

With the videos for “Send The Addy,” “May I,” and “Weak” continuing to rack up plays equal to those of her prior hits “Like That Bitch” and “My Attitude,” Flo Milli further endears herself to the fervent fanbase that turn her breakout single “In The Party” into a viral smash and made her a star on the rise. If she can keep up this same steady flow, it won’t be long ’til she’s outgrown Freshman class lists and finds herself the queen of hip-hop’s campus.

The AI landscape is shifting from ‘data’ to ‘knowledge.’ Here’s why that matters