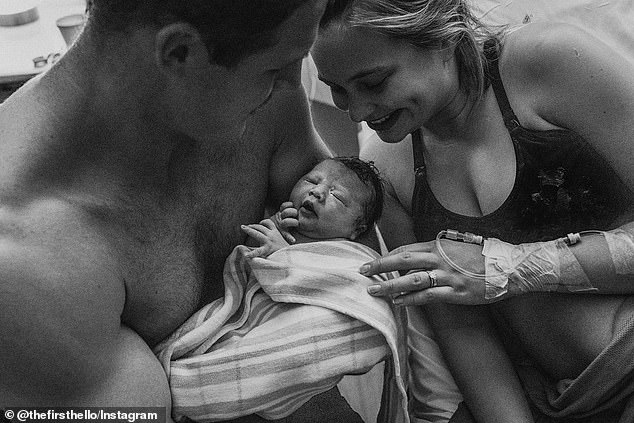 NRL star Tom Burgess has celebrated the birth of his second child with his fiance Tahlia Giumelli on a day of family turmoil.

Tom announced the birth of the couple’s baby daughter, who doesn’t yet have a name, on Monday evening with a series of photos from hospital.

On the other side of Sydney, his brother Sam was locked in a bitter court battle with his ex-wife Phoebe after their messy marriage breakdown.

Tom took to Instagram on Monday evening to announce the birth of the couple’s baby daughter. Photos by @thefirsthello

But you wouldn’t have known it from Tom’s gushing Instagram post accompanied by photos of the happy parents cradling their newborn daughter.

‘Will never get over the miracle of childbirth, we welcomed our second little princess, A bit of a surprise but baby and mum are all great!’ he wrote.

‘She’s weighing a very healthy 3.525kg, 7lbs 12oz! Tahlia was a such a legend, we can’t wait to take our little girl home and introduce her to her big sister.

Still deciding on a name. A big thanks to all our midwives and doctors who helped us along the way!’ 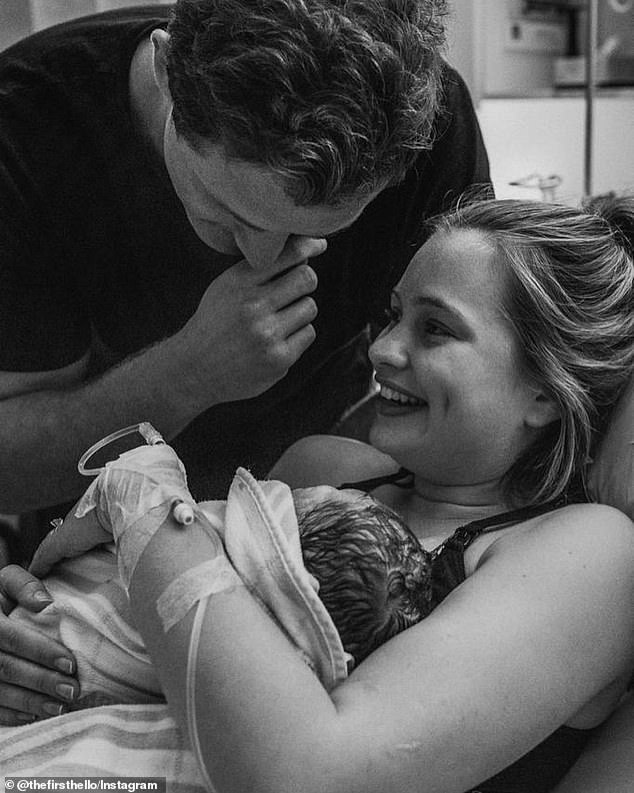 ‘Will never get over the miracle of childbirth, we welcomed our second little princess, A bit of a surprise but baby and mum are all great! She’s weighing a very healthy 3.525kg, 7lbs12!,’ he wrote 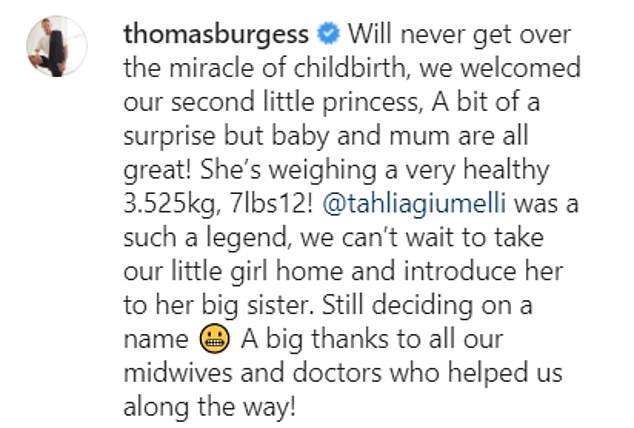 Meanwhile, in Moss Vale Local Court southeast of Sydney, Sam faced off against his former wife.

Sam’s lawyer Phillip Boulten SC accused his former wife of trying to destroy his reputation following the publication of an explosive front-page article in The Australian.

But Ms Burgess said journalists approached her about rumours, and she handed over a document prepared for her lawyer ‘instead of covering it up, which is so typical of the system I was part of, that I believe is toxic within the NRL’.

Mitchell Hooke denies the allegation and said he never experienced such ‘fear’ before the argument with the ex-NRL star.

The former Minerals Council chief executive said Sam had refused to leave his home before he ‘went off’ yelling at him from about 20cm away, repeatedly telling him: ‘I’m going to get you’. 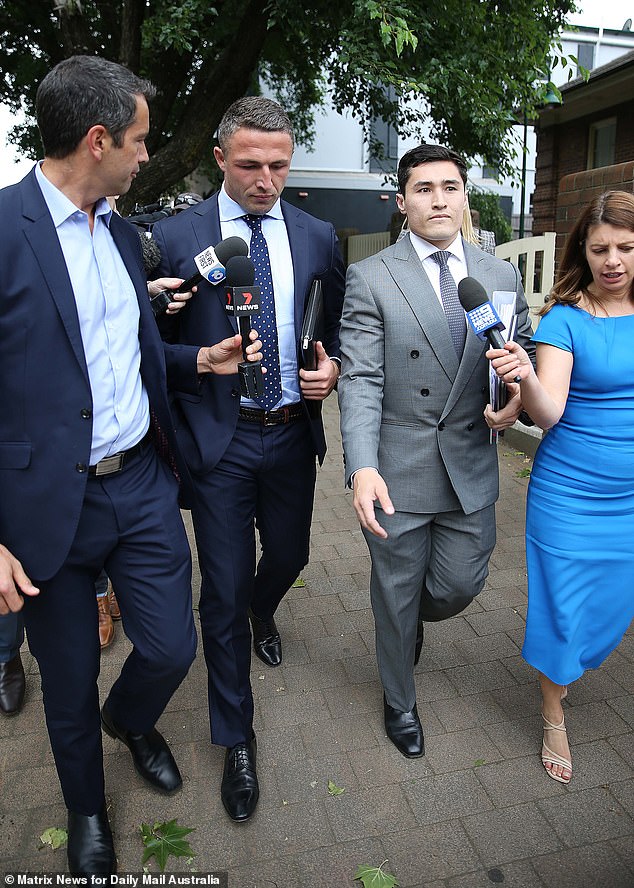 ‘I remember the finger and it being right in my face,’ he said.

‘And the look, I’ve not seen it before. He was wild. He was yelling. Not quite screaming but yelling, loud and aggressive in my face, it was enraged hate.

‘I was terrified, I’ve never felt fear like it. My whole body went cold.’

Sam continued to hurl expletive-riddled abuse at the 64-year-old man as he got into his car and sped away from the property, he said.

Mr Hooke’s daughter Phoebe Burgess also gave evidence earlier about a call she said she was not expecting from her father.

‘He was emotional and shaky, he wasn’t making a lot of sense, saying he’s OK: ‘He’s gone, he had wild eyes… he just came at me’,’ she said.

Former South Sydney captain Sam Burgess, 31, has pleaded not guilty to stalking or intimidating with the intention to cause fear or physical harm, while an apprehended violence order has been taken out on behalf of Mr Hooke by the police.

Shortly after returning to the Glenquarry home Ms Burgess was told by another family member: ‘Pheeb he just went off’.

Ms Burgess said her father’s mouth was dry and he was visibly shaken.

‘Never seen my father quite like that before… he was wobbly on his feet.’

Sam’s defence has accused her and her father of seeking legal advice before calling the police shortly after the incident occurred, with phone records showing both did contact lawyers. 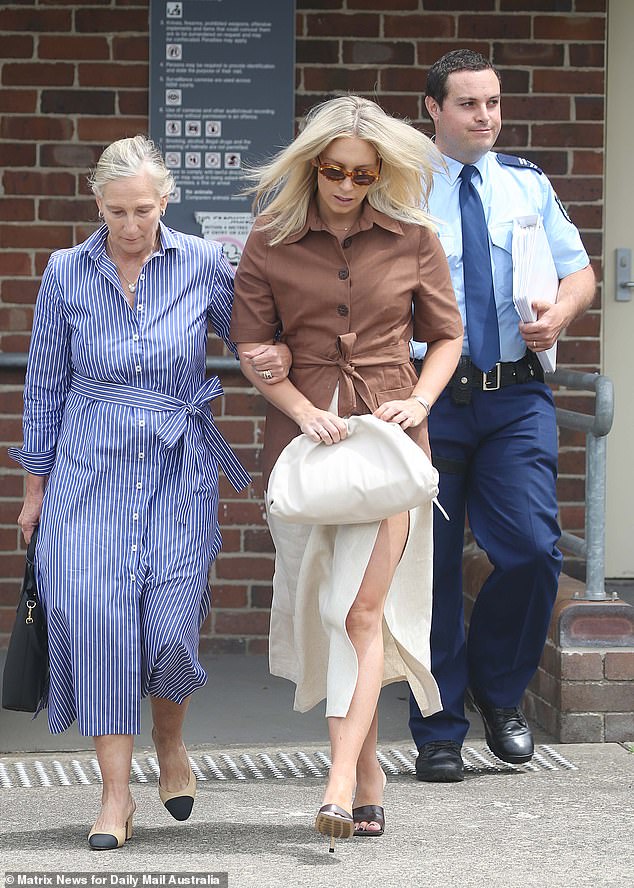 Before Ms Burgess left the stand she became teary, saying it was against her instinct to call the police.

‘I thought it was the ultimate betrayal, I didn’t want to call the police.’

CCTV footage was played in court showing Sam interacting and taking pictures with fans while drinking four beers before he was due to visit the Southern Highlands home.

Sam retired in 2019 after a 270-game NRL and English Super League career.

He stood down from roles as a commentator and South Sydney assistant coach in October.

The hearing is expected to continue early next year.