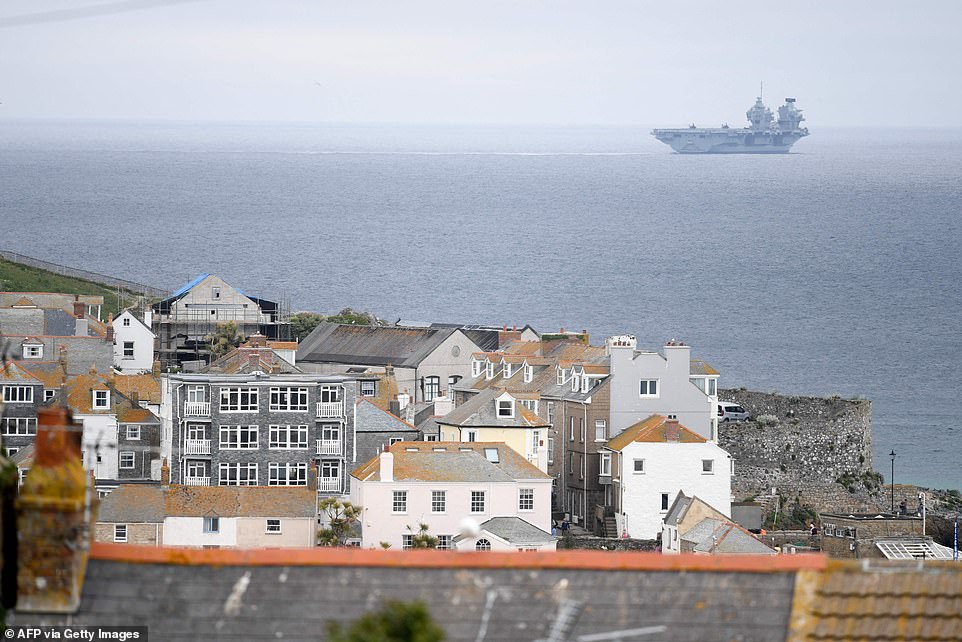 The £3.3 billion state-of-the-art aircraft carrier will provide the backdrop the Prime Minister’s first meeting with Biden at the G7 summit in Cornwall since his election in November 2020.

It’s a symbol for Johnson’s hopes for a post-Brexit Britain, with the vessel’s sister ship HMS Queen Elizabeth on patrol across the globe.

The HMS Prince of Wales is nearing operation readiness after an F-35B Lightning aircraft landed onboard the aircraft carrier for the first time yesterday.

The 900ft long carrier, which has a crew of 1,600, is based at Portsmouth and was formally commissioned in December 2019.

The HMS Prince of Wales aircraft carrier patrols the waters off St Ives, Cornwall ahead of the G7 summit 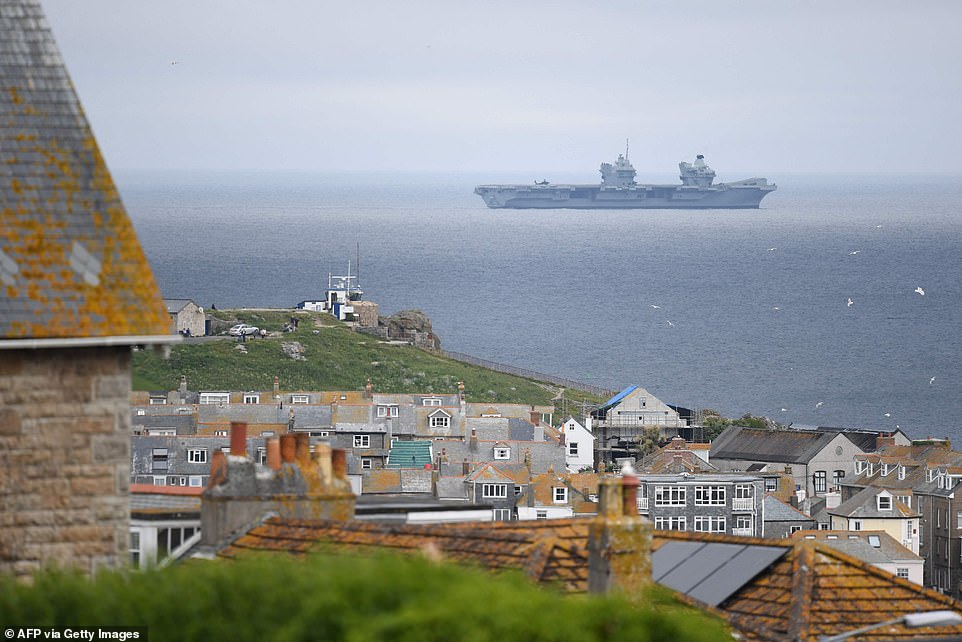 The ship has been beset with technical problems and was stranded in Portsmouth in December 2020 after thousands of gallons of sea water poured into the vessel’s engine room for more than 24 hours and damaged the electrics.

It was banned from setting sale until repairs were made, with defence minister Jeremy Quin revealing the fix would cost £3.3million.

It marked the second leak for the 65,000-tonne ship in less than a year. The engine room had already been flooded to the depth of 3ft during a leak in May 2020.

It was later revealed that the carrier had spent just 87 days at sea during its first two years in service.

But today, there was no sign of any issues as it patrolled the sea near the G7 summit.

The Queen Elizabeth-class carrier is the eighth HMS Prince of Wales.

It’s sister ship is the Queen Elizabeth is currently taking part in a military exercise in the Black Sea.

The arrival of the carrier brings the number of Navy vessels on security watch for G7 to four.

The frigate HMS Northumberland has been based off the Cornish coast for three days along with HMS Tyne and Tamar.

The vessels can be pressed into action for various work such as high intensity war fighting or providing humanitarian aid and disaster relief.

In May 2020, the Royal Navy launched an investigation after a pipe leaked on HMS Prince of Wales and caused an ankle-high flood.  The leak was said to have taken place on the carrier while it was at Portsmouth Naval Base.

A video later posted on Facebook showed water gushing through the ceiling and flooding an entire room of the warship.

It is understood that the pipe was isolated quickly and the water was soon mopped up by the crew on board.

The Royal Navy later said it was testing its safety systems including the deployment of life rafts and emergency chutes following the flood.

A Royal Navy spokesman said at the time: ‘Following a minor issue with an internal system on HMS Prince of Wales, the ship’s company were required to remove a small volume of water from the ship.

‘An investigation into the cause is now under way but this will not affect the ship’s programme.’

Then, in December that year another leak occurred, with a Royal Navy spokesman saying: ‘HMS Prince of Wales is alongside at HMNB Portsmouth conducting repairs following a flood in an engine room.

‘The ship’s company are getting ready to sail for further training and trials in 2021.’

More than 100 sailors were forced to leave the ship and spend the night on HMS Queen Elizabeth after the aircraft carrier suffered a power cut in Portsmouth harbour in 2019.

HMS Queen Elizabeth also suffered a leak in July 2019 causing a large quantity of water to pour from a pipe and to flood through several decks.

And in 2017, HMS Queen Elizabeth faced multi-million pound repairs after it was discovered that a faulty seal on a propeller shaft was letting in 200 litres of sea water an hour.

There was no damage or breach to the hull as the water was contained in an internal compartment and then pumped out, but the vessel had to return to Portsmouth and cut its five-week sea trials short as a precautionary measure.

At the time, the ship’s then commanding officer Captain Steve Moorhouse said it was safe and that in his experience leaks were a ‘weekly’ problem for warships.

The older of the two carriers – HMS Queen Elizabeth – also delayed its departure from Portsmouth last year as its 700-strong crew were tested for coronavirus.

Both HMS Prince of Wales and HMS Queen Elizabeth have been built by the Aircraft Carrier Alliance (ACA) – a partnership of BAE Systems, Babcock, Thales and the Ministry of Defence.

‘Like Everyone Else’: Ali Gets A Brand-New Wheelchair On Teen Mom 2