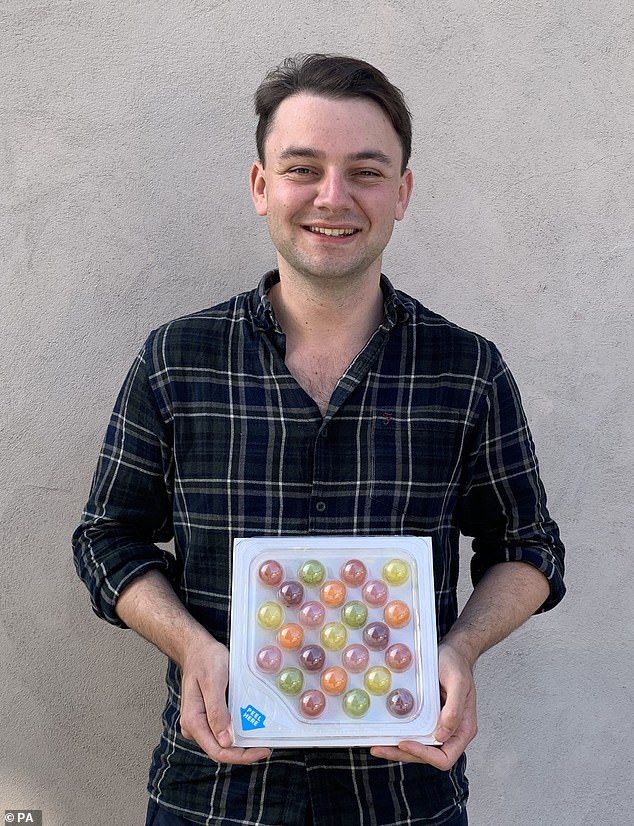 A student has created a brand of jelly sweets that can help dementia patients beat dehydration, preventing life-threatening infections.

The tasty fruity drops were invented by Lewis Hornby after his grandmother Pat was rushed to hospital suffering with severe dehydration.

They are 95 per cent water with added minerals – and flavoured with a small amount of fruit and artificial sweetener.

Studies show the elderly, especially with dementia, often forget to drink and the resulting dehydration can lead to urinary tract infections.

Pictured: Lewis Hornby, an inventor who has released a rehydration sweet which could save the lives of dementia patients across the world after his late grandmother Pat was sent to hospital with dehydration

Trials showed that older patients were more likely to enjoy Jelly Drops than they were to drink a glass of water.

First baby test for the blind

Instead of displaying the result with a coloured line, the urine test allows users to feel it, via a line of bumps on the front of the device.

Traditional urine tests are made using dye, which changes colour when it reacts with a hormone released during pregnancy.

But in the test, pioneered by scientists at the Royal National Institute for the Blind, the hormone is detected by a sensor which triggers a built-in motor to make bumpy indents on the surface of the device, signalling a positive result.

Video games can ease symptoms of Parkinson’s disease, according to a new Dutch study.

As well as the tell-tale shakes, people with the condition, which affects 145,000 Britons, experience memory loss and lapses in concentration.

But five months of playing a smartphone game, accessed via an NHS-approved app called MyCognition, can improve scores in five cognitive tests, say the researchers from Radboud University Medical Center in Nijmegen.

A third of Britons say home-working has made them more exhausted – despite barely leaving the house.

Lockdown confinement has also affected memory, according to a poll of 2,000 people by nutrition brand Revvies.

Respondents blamed lower energy levels on a lack of exercise and sunlight, as well as limited access to activities they enjoy.

Previous research has suggested that working from home can increase anxiety, due to blurred boundaries between a relaxing home environment and a stressful workplace.