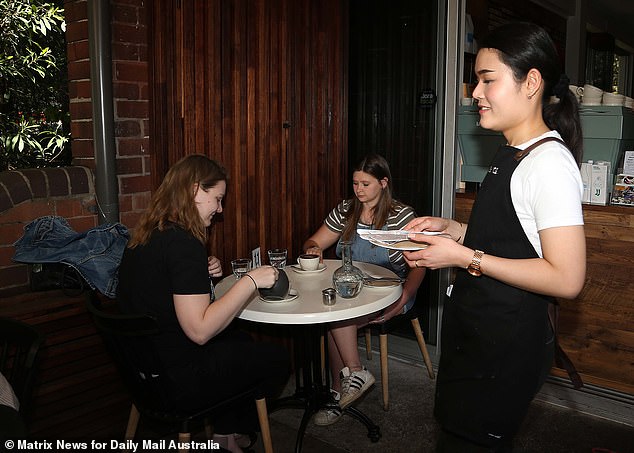 Australians set to lose $2,200 a year in retirement savings due to delay in superannuation hike – and former PM warns you WON’T get it back in wages as companies will boost profits instead

Australians would typically lose more than $2,200 a year in retirement savings if a planned superannuation increase was scrapped.

Compulsory employer super contributions are due to climb in stages from 9.5 per cent now to 12 per cent by July 2025.

Treasurer Josh Frydenberg, however, has hinted the government is considering reversing that increase so workers have more money in their pocket now rather than having it put toward retirement.

Australians would typically lose more than $2,200 a year in retirement savings if a planned superannuation increase was scrapped. Compulsory employer super contributions are climbing in stages from 9.5 per cent now to 12 per cent by July 2025. Pictured is a Sydney hospitality worker

Under the planned increase of superannuation contributions to 12 per cent, that amount would have climbed by $2,229 to $10,695 annually.

The government believes delaying that super increase would allow companies to pay more in wages, allowing workers to spend more money at a time when the economy badly needs it.

However former Labor prime minister Paul Keating, whose government introduced compulsory superannuation in 1992, warned there would not be any boost to wages and workers would simply be worse off in retirement.

He argued scrapping a planned increase in super would only boost company profits and help shareholders more than workers.

‘The profit share will simply rise and it will cost people in the long run,’ he told ABC 7.30 host Leigh Sales on Monday night.

‘It will come from the profit share of companies, which have now banked ten percentage points of labour productivity unpaid as wages since 2012.’

Australian wages grew by a record low of 1.4 per cent in the year to September and have been at below-average levels of less than three per cent since mid-2013. 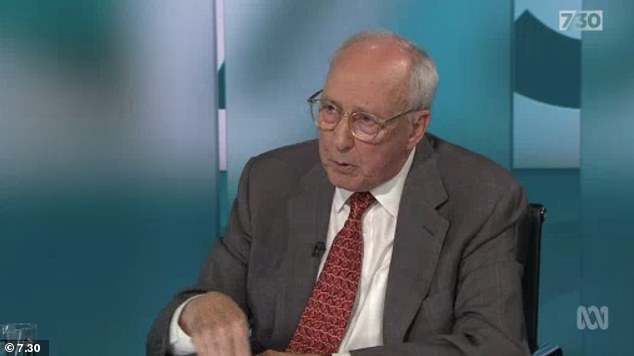 ‘If you are just starting out, you will have a quarter more because 2.5 per cent super is about roughly a quarter of 9.5.’

Mr Keating has also spoken out against allowing workers facing financial hardship due to the coronavirus recession to withdraw another $10,000 from their superannuation by December 31, 2020 – on top of the $10,000 that was allowed to be withdrawn before July 1.

The former prime minister argued that someone in their thirties withdrawing $10,000 from their super would miss out on $100,000 by retirement age once compound interest was factored in.

The Association of Superannuation Funds of Australia calculated that couples needed $640,000 to retire comfortably compared with $545,000 for singles.