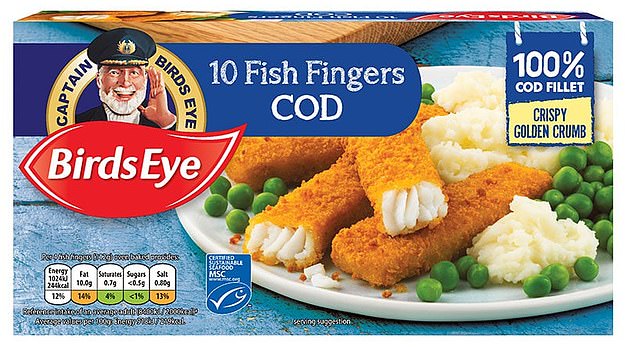 Popular Bird’s Eye frozen fish fingers were labelled as being made in Australia despite containing fillets imported from South Africa and the United States.

The Australian Competition and Consumer Commission has ordered its American parent company Simplot’s to change its country of origin labelling.

Bird’s Eye and I&J products made after October 31 this year are allowed to be labelled as ‘Packed in Australia’ but ones packaged before Halloween will still be on supermarket freezer shelves as ‘Made in Australia’.

The competition regulator said imported fish from South Africa, the United States and New Zealand could not be labelled as being ‘Made in Australia’ as this breached consumer law.

The ACCC’s deputy chairman Mick Keogh said labelling products as being ‘Made in Australia’ when the ingredients were imported was misleading to consumers.

‘Not only can incorrect labelling wrongly influence consumers into purchasing a certain product, it can also give a competitive advantage to those who use the “Made in Australia” label in breach of the Australian consumer law,’ he said.

‘Country of origin labels are designed to inform consumers, some of whom may be willing to pay a premium for products they think are made in a particular country, especially Australia.’

Simplot’s, a wholly-owned subsidiary of American food processing giant J.R. Simplot, had argued that slicing, crumbing and par-frying of the frozen fish constituted substantial transformation, justifying the use of the ‘Made in Australia’ tag.

The ACCC disagreed with Mr Keogh arguing the substantive product was still imported even if the fish had been significantly modified in Australia.

‘Processes that only change the form or appearance of imported ingredients or components no longer qualify as substantial transformation,’ he said.

Food sold in Australia since 2016 has had to contain country of origin information.

The Competition and Consumer Amendment (Country of Origin) Act 2017 stipulated a product had to be grown or produced locally, and not just modified, to be labelled as being ‘Made in Australia’.

Consumer laws were updated after the ACCC found supermarket giant Coles had, in 2013, labelled bread as being ‘Freshly Baked In-Store’ and ‘Baked Today, Sold Today’ even though the ingredients had been imported from Denmark, Ireland and Germany.

AOC Admits She Considered Quitting Politics Prior To Reelection