In Queens, some Haitian restaurants struggle, others innovate to stay afloat – The Haitian Times 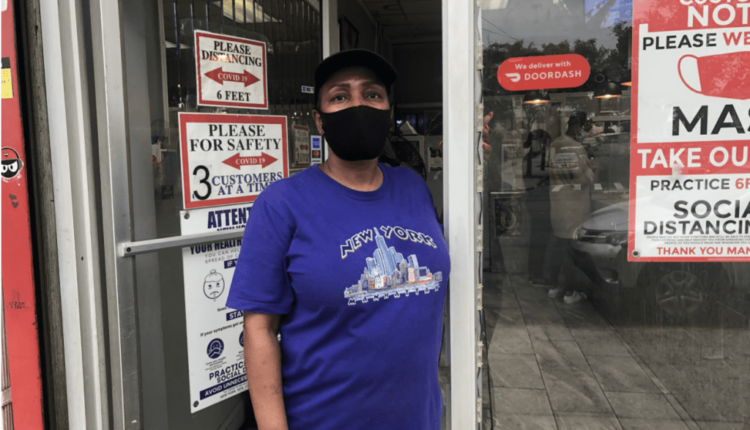 Sitting alone inside the dimly lit La Cormier Restaurant and Lounge recently, owner and manager, Josette Anne-Marie Pierre, watched from the front window as people walked past, most not even glancing in the direction of the eatery located on Jamaica Avenue in Queens Village.

Every once in a while, a customer or two came inside to buy food. However, for months, Pierre said, she has been playing what feels like a never-ending waiting game.

“Everyone is scared of COVID-19,” said Pierre, her teary eyes looking at the front counter filled to the brim with trays of uneaten Haitian rice, griyoand chicken. “I am fearful for my business because winter is coming and there could be an uptick in COVID-19 cases. I just hope with all my heart that a vaccine is found soon.”

Pierre’s struggle with her Haitian restaurant business is far from an isolated case. Restaurants across the country have shuttered or lost business due to the coronavirus epidemic. With ethnic-themed establishments like hers, however, the challenges are unique because they rely on a specific immigrant community to survive.

Restaurants owned by immigrants, Blacks, Indigenous people and other people of color have been affected more harshly than businesses owned by other races and non-immigrants, according to the Queens Chamber of Commerce. Tom Greco, president and CEO of the Chamber, said of the 6,000 restaurants that operated in Queens when the pandemic first struck, up to 50 percent may never reopen.

“This is caused by a number of factors, including the 25 percent [capacity] that hasn’t been enough to cover many businesses in this pandemic,” Greco said. “In many cases, among immigrant folks, there’s language barriers and a lack of connections to certain organizations.”

Wilfrid Paul, owner of Brass Riz & Grill Express on Linden Boulevard in Cambria Heights, said the pandemic has brought overwhelming fear and anxiety about the future of his business. Having lost  75% of pre-pandemic sales, and used up a $10,000 stimulus package as well as personal savings, Paul is feeling dejected.

“I am as broke as someone who has never worked a day in their life,” he said.

Brass Riz & Grill Express, which once served alcoholic beverages, has closed its bar. Paul discontinued live music performances because he was not sure patrons would comply with social distance regulations. He offers takeout now, but allows just 30 people at a time for pick-up.

“I am still extremely afraid of the virus,” Paul said. “I hope a vaccine comes out soon.”

Over in Queens Village, Creole Fusion Caribbean Buffet on Springfield Boulevard, appears to be doing better. Co-owner Evena Guerrier said her restaurant just might survive — mainly because the restaurant was geared toward take-out before the pandemic.

“We have [fewer] people coming in-person, but we have more people ordering through Uber Eats,” she said.

Still, Guerrier said, the pandemic has caused her to cut back her staff’s work hours and she fears the possibility of contracting the virus. Although she insists that customers wear masks when picking up food and requires that all employees wear masks and gloves, she is fearful.

“One should always be nervous,” Guerrier said.  “You have to protect yourself because someone could sneeze or cough at any time and you never know what they have.”

Evenson Labranche, owner and executive chef Evenson Catering, said his struggles stem from a decrease in people hosting large gatherings because of the pandemic. He went from 37 weddings lined up to cater to zero as people canceled larger, in-person ceremonies.

To survive, he has been brainstorming ways to bring his customers back or meet them where they are. That includes promoting the business more on Instagram and driving farther out to deliver orders. He also customizes more orders to fit customers’ needs.

“If a customer needs something and we don’t have it, now we make it from scratch and sell it to them for cheaper prices than they might [find it at] a supermarket,” he said.

Looking to the future

As the economy slowly reopens and the country faces a second wave in coronavirus infections, the prospect is daunting for some.

Restaurants have long been a go-to business for Haitians, as for many immigrants. In New York City, immigrants made up more than 60% of restaurant workers in 2018 and 2019, according to the New State Comptroller’s report. In Queens alone, 49,100 jobs were in restaurants, out of the city’s 315,000 jobs in March 2020. By August, as rules loosened and outdoor dining was permitted, employment stood at 174,000.

No one can say what the statistics may be another six months from now, but business owners who are trying different approaches appear more optimistic than those who are not.

Labranche, for one, vows to continue growing. Despite his loss of business and his slow growth, Labranche is optimistic.

“We are going to keep fighting to remind people of the good food that we have always served,” Labranche said. “This is not the end. One day we will become a bigger business.”

Tanis Tamar, the creator of the “Tap Tap Now” Haitian food app, echoed a similar sentiment. After launching the app in 2019 to allow people to order from Haitian eateries anywhere, the pandemic caused a decline in the number of restaurants signed up for the app.

To help, Tamar is retooling the app to attract more restaurant sign-ups and re-releasing in December. He is considering eliminating either the typical 20% to 30% down payment or the transaction fee. Tamar is also looking at how to send the restaurant’s cut immediately to the establishment.

“We want to come up with a new business model to help restaurants afford us,” Tamar said. “The new version will also give Haitian restaurants more of a chance to have an online presence, which will increase their customer rates and market their restaurants.”

Nicole Alcindor is a freelance reporter for The Haitian Times, covering the community in eastern Queens and Long Island.