Italian supercar tour: Roaring through Tuscany in a Lamborghini and Ferrari 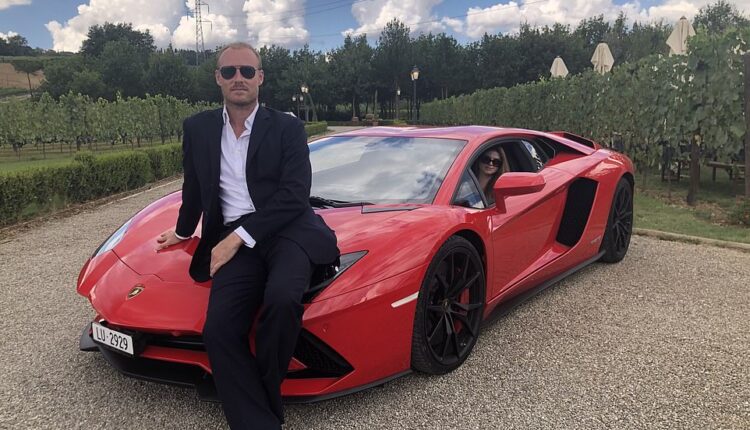 This is the life!’ I yelled as I floored the accelerator of my Lamborghini Aventador, catapulting through the lush Tuscan countryside.

Of course, I now realise that this was a ridiculous thing to say. The car wasn’t mine, and ‘life’ was exactly what it wasn’t, not for me at any rate. Yet in my defence, there’s something about a ‘Lambo’ that could make anyone go crazy.

That, partly, is the aim of Ultimate Driving Tours (UDT), a firm devoted to fulfilling the fantasy of anyone who has ever dreamed of driving cars only previously glimpsed in James Bond films. It is licensed to dispense thrills and not merely to petrolheads. 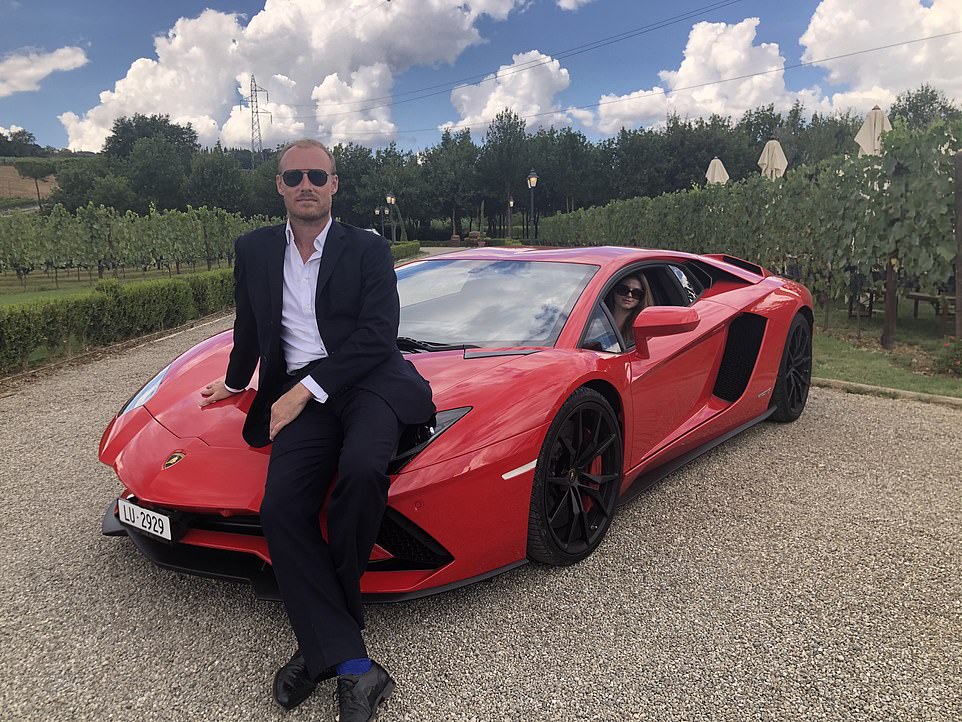 Thomas and his girlfriend, Georgia, with their Ultimate Driving Tours Lamborghini Aventador

It caters for nervous non-experts like myself, who hardly know a supercar from a supermarket trolley.

It’s testament to the tact of UDT’s technical support crew that, throughout my Taste of Tuscany tour, they never made me feel like a fool. On the first morning, after I had limboed arthritically into the ludicrously low-slung seat of a Ferrari 488 Spider, I fumbled with the key fob, trying to work out how to start the thing, and accidentally popped the hood.

With a smile, my instructor Josh gently depressed the bonnet. Then he squatted at my window and pointed out the start button. It said ‘START’ on it, which ought to have been my clue. I pressed it. The Ferrari awoke with a snarl, which soon settled into a mellifluous grumble, as it realised where it was, and why, and who was at the wheel.

A moment later, I was lurching down the narrow switchback drive of our hotel on the raised outskirts of Florence. I ignored the tense inhalations of my girlfriend, Georgia, who was understandably concerned that I might prang this £200,000 vehicle. 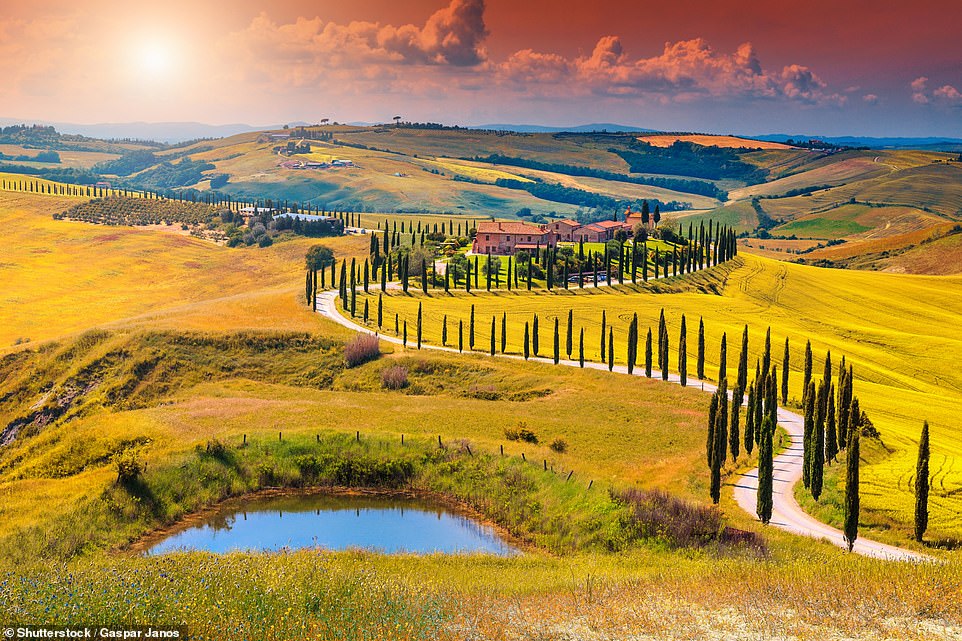 Thomas’s supercar convoy zoomed around the lush Tuscan countryside. During the trip he fell for the Lamborghini (stock image)

And then we were out, adrift on real roads, cruising past the amused or appreciative eyes of pedestrians.

The Luxury Supercar Tour works like this. You’re part of a group. You pick a supercar. (The word roughly refers to any car that will do 0 to 60mph in three seconds.) Then you drive in convoy through spectacular scenery, swapping cars at intervals. If this sounds tame, it isn’t. It’s like being taken off-piste by some grizzled ski-guide. You see sights you wouldn’t on your own.

The Ferrari was far easier to drive than I had been warned. But I didn’t love the jolts and jerks. It seemed a little brassy. No, it was the Lambo I fell for.

During a pit-stop in San Gimignano, I switched to this still more preposterous machine. Its face displayed all the humanity of a stiletto. Its cockpit was even lower and more cramped than the Ferrari’s. Amid the intricate dashboard, the speedometer casually informed me that it was capable of doing 350kph (218mph). I had been half-expecting the thing to take off or at least to eject me from the driver’s seat. But under the patient guidance of Josh, I kept it on the road. When we reached a straight, I hung back a little, before pressing my pedal to the metal. Fifth gear. Sixth. Seventh.

Boom! I don’t know what it is, this kick we get from speed, but it’s obviously childlike. It’s the glee of a seven-year-old on a log flume, or bombing past the grown-ups on the final ski schuss.

When I was about that age, I remember, a friend of mine had a poster of a Lamborghini. That’s another thing I learnt from my Tuscan tour: what was cool when you were a kid is still cool now. UDT is the creation of Australian couple Anthony Moss and Julie Hunter, who also lead the tours. This is the first year the company has opened up to the UK market, and it is offering shorter trips at comparatively low prices. 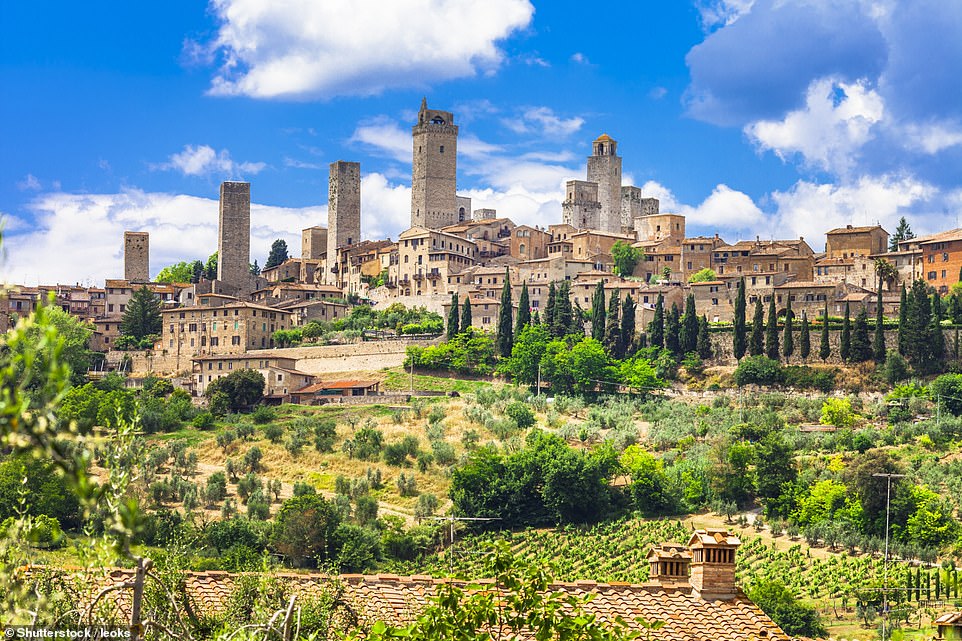 Thomas and his girlfriend enjoyed a pit-stop in San Gimignano, pictured. They also visited Siena and Florence

Thomas was a guest of Ultimate Driving Tours, Belmond Hotels and Torciano Vineyard. The Tuscany Self-Drive is available from £3,490pp for a five-day self-guided tour including car of choice and accommodation with breakfast (ultimatedrivingtours.com). BA (ba.com) London to Florence from £104 return.

Make no mistake, though, these tours aren’t cheap, with even the briefest clocking in at a few grand. But then some would pay the same for a villa with sculpted garden and infinity pool. And you get plenty of bang for your megabuck. As well as the boys’-toys buzz of the driving, there’s the fineness of the dining and splendour of the accommodation.

After experiencing the buoyancy of a Bentley and the plush thrust of a Porsche, we accompanied our group to the Tenuta Torciano winery between Florence and Siena, where we buried our noses in freshly rootled truffles and tried ten wonderful wines.

This family-run vineyard is a little Italy within Italy. Everyone who works there is addled with pleasure. In the evenings, we repaired to the cloistered hush of the Belmond Castello di Casole near Siena or the Belmond Villa San Michele above Florence.

There, we strolled amid olive trees and statuary. Soon it would be time for an aperitif followed by a light dinner of perhaps five or six courses, with wines to match.

‘Not too shabby, eh!’ declared one fellow guest. ‘I could get used to this!’ exclaimed another. Normally, I might have chuckled at these cliches but after my fling with the Lambo, I too found words failing me.

‘Gorgeous,’ I muttered to Georgia. ‘Stunning,’ she replied. So, to end, I’ll reach for my first frazzled phrase. Because for a couple of joyous days, this really was ‘the life’.