Jailed Fyre Festival fraudster Billy McFarland is set to launch a podcast from prison titled, ‘Dumpster Fyre’ in which he promises to tell his side of the story.

The inmate at Elkton Federal Correctional Facility in Ohio teased his latest business venture on Instagram with a video where he can be overheard saying: ‘This is inmate number 911860054, otherwise known as Billy McFarland, the founder of Fyre Festival.’

‘I’m not going to hide behind my mistakes, I’m going to share everything that happened,’ he says in a candid clip of the podcast obtained exclusively by DailyMail.com.

The podcast is conducted through a series of recorded phone interviews from behind bars with the infamous fraudster who is currently serving a six year sentence for conning people out of millions to fund a fake music festival Fyre Festival in 2017.

A promo video released for ‘Dumpster Fyre’ on Billy McFarland’s Instagram shows the fraudster standing with fellow inmates at the Elkton Federal Correctional Facility in Ohio. It is unknown how the photograph from prison was taken 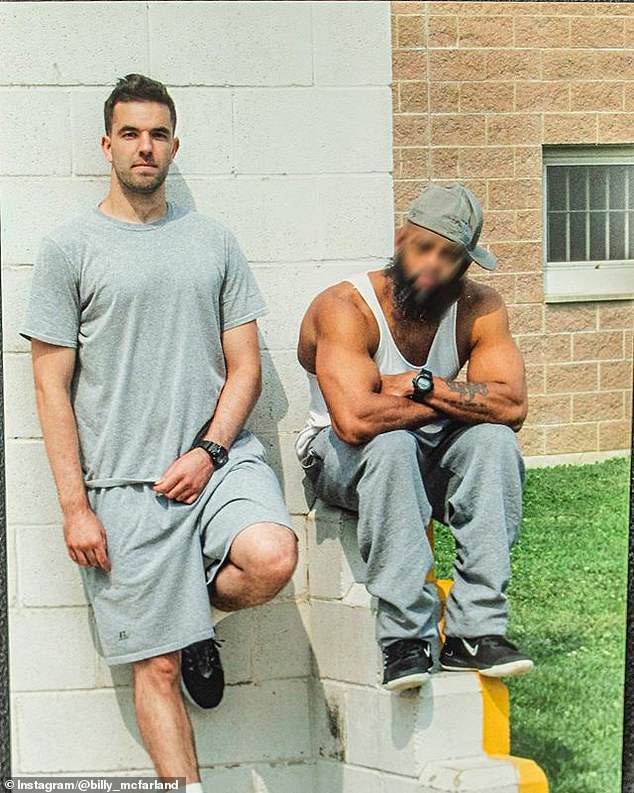 Billy McFarland poses with an inmate at the Elkton Federal Correctional Facility in Ohio in a promo video released on Instagram for his new podcast, Dumpster Fyre, set to be released on October 20. He tells DailyMail.com that the hardest part of jail is being separated from friends and family, ‘Forced distances is the harshest punishment,’ he said. ‘The whole concept of human connection really dawns on you when you’re essentially locked in a room and separated from the rest of the world’

Billy McFarland plans to take down the 2019 Hulu and Netflix documentaries by telling his version of events about the ill-fated music festival that was set to take place in the Bahamian island of Exuma over the course of two weekends in April and May 2017.

Billed as ‘the cultural experience of the decade,’ the event catastrophically fell short of its promise as guests arrived to a barren island in the Bahamas with inadequate food, water, and shelter.

‘When I think about the mistakes that were made and what happened, there’s no way that I can describe it but just, ‘What the f*** was I thinking?’ he says in the podcast.

29 months into his sentence, McFarland insists, that ‘the whole story hasn’t been told.’

Constrained by a one-phone-call-per-day limit, the podcast is made though a series of 15-minute recorded conversations conducted over the period of one week. Jordan Harbinger (of the Jordan Harbinger Show) moderates the first chapter and gets down to brass tacks right away when he asks McFarland: ‘What was going through your mind? What was your plan?’

McFarland explains that his first mistake was ‘setting a totally unreasonable time frame to execute the event.’ There was only six months between concept and scheduled completion. ‘We essentially wanted to build a city out of nothing,’ he said.

Multiple event producers advised that a project on Fyre Festival’s magnitude would require at least 18 months of planning and millions more in funding. Notwithstanding the advice- McFarland pushed forward.

‘I couldn’t be told no,’ he said to Harbinger.

This much is true. Marc Weinstein, a music festival consultant working on Fyre told the Netflix documentary that when he suggested they cancel or postpone the event, McFarland responded: ‘We’re not a problems-focused group, we’re a solutions-oriented group, we need to have a positive attitude about this.’

As the event neared, it seems that the warning signs were clear to everybody except McFarland. 48 hours before guests were slated to arrive, performers began to drop out. Housing, bathroom facilities, water, food, the stage had all yet to be completed.

And yet, postponement was still out of the question.

On the podcast, McFarland gives insight into his mindset during that critical time: ‘As people were saying it couldn’t be done, some amazing advancement or idea, or deal, just something great would happen to take us to the next level,’ he says. ‘And then those old fears would be forgotten, but that next level would bring us numerous new concerns.’

‘It kept being this amazing ‘cat comes out of the hat’ trick at just the right moment, not only to save things but to motivate people even further.’ 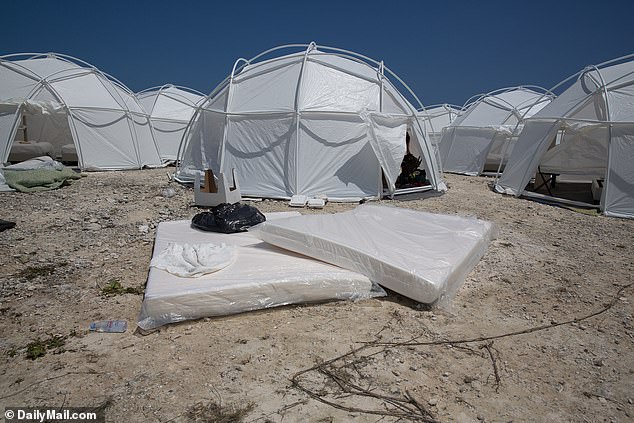 Guests that were promised luxury villas were shocked and horrified when they arrived to see an incomplete camp ground made of disaster relief tents. On the podcast McFarland claims that they rented over 200 local villas and condos but that the box of keys inexplicably went missing ‘somewhere in the second of third flight of arriving guests’ 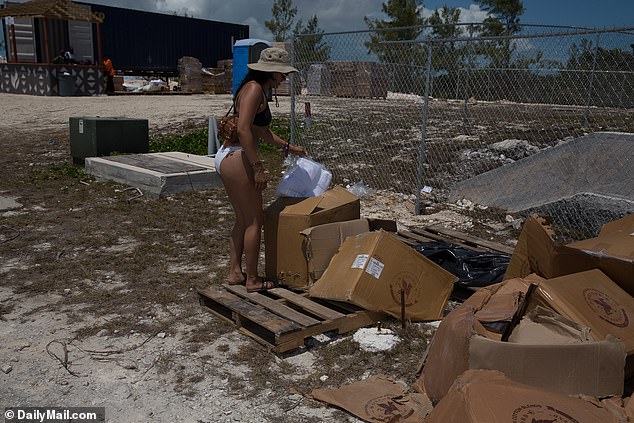 Fyre festival was heavily promoted on social media and billed as ‘the cultural experience of the decade’ touting plush villas and gourmet food. However, the project completely fell apart due to lack of funds, and guests arrived at a barren island with inadequate food, water, or shelter 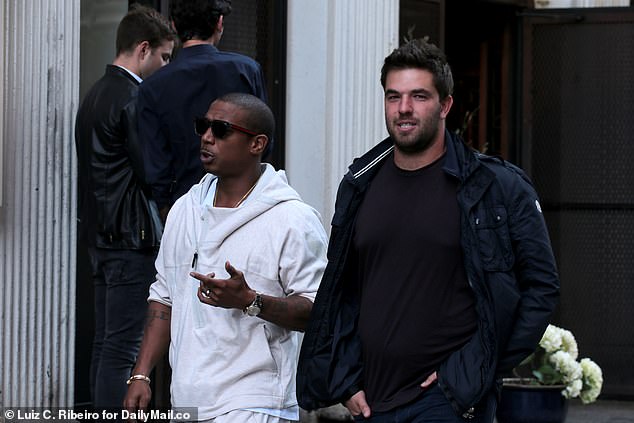 Promised ‘modern, eco-friendly geodesic domes’ and luxury beachside villas, festival-goers were shocked when they arrived on the island to chaos and a disaster-relief tent city.

McFarland disputes this in the podcast; he insists that there was a massive effort to make good on the promise of ‘villas’ whether they were beachside of not. ‘We had certainly put in the time, effort and funding to secure the villas,’ he said defiantly. 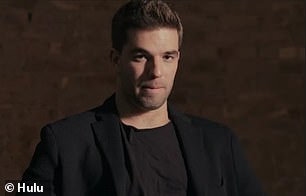 In June 2018, while out on bail, McFarland was arrested a second time for running a new scam that promised VIP access to exclusive events. He conned 15 people out of $100,000. He tells the podcast that it was one of the hardest things mistakes to come to terms with and says: ‘I was desperate and thought I could dig myself out of the hole’

‘For a period of four to six weeks before the festival, we actually rented over 200 separate villas and houses,’ he explained on the podcast.

He tells Harbinger that they hired a former Navy Seal to run a ‘street team’ that knocked on the doors of ‘every possible house, villa or condo they could find’ to offer them cash in exchange for use of their property.

‘We literally took physical possession of these keys. We had these keys in this cardboard box and a printed out Excel document outlining the address of each house and who was supposed to stay in that house.’

Inexplicably McFarland says, ‘The head of that villa team disappeared with the box of keys and excel document somewhere in the second of third flight of arriving guests.’

The alleged, ‘box of keys’ was never found.

On the podcast, McFarland claims that he has the bank statements and spreadsheets to back-up his claim, and says: ‘I know some of the guests found their way to the villas and many of them stayed their for the full week, and I’m hoping we can get some of them on to tell their story.’

McFarland is currently serving six years behind bars for fraud after he conned people out of millions to fund fake music festival Fyre Festival. His podcast is comprised of 15-minute recorded phone conversations conducted over the period of one week. He hopes to use money earned from the podcast to pay back is $26million restitution 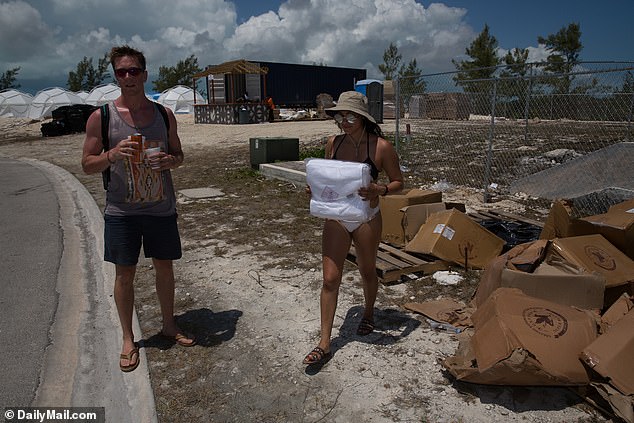 Two guests left stranded at the cancelled festival are forced to scavenge for supplies. On the podcast, McFarland explains why he didn’t cancel or postpone the event earlier, even as doom seemed inevitable. He said: ‘It kept being this amazing ‘cat comes out of the hat’ trick at just the right moment, not only to save things but to motivate people even further’ 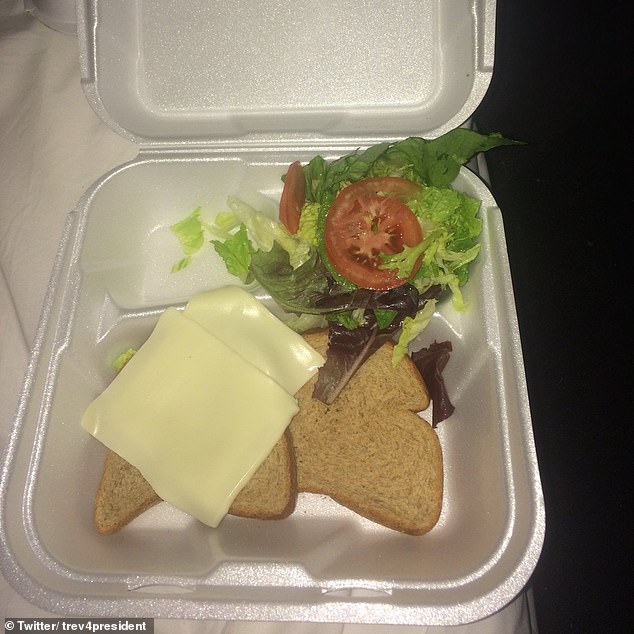 Guests who paid between $500 – $1,500 per day for the event were promised gourmet meas but were instead given pathetic cheese sandwiches in Styrofoam containers

Two months after McFarland pleaded guilty to defrauding investors and vendors of the festival, he was arrested for a second time in June 2018 on shocking new charges of wire fraud and money laundering.

While awaiting sentencing on bail, McFarland started a new scam that sold fake VIP tickets to exclusive events like the Met Gala, Burning Man and Coachella. In one case, two customers flew from Florida to New York for the Grammy Awards, only to be turned away at the door.

Those looking for an explanation will be disappointed.

He tells Harbinger: ‘This took me the longest to be truthful to myself about what really happened. I think I was just in denial for so long that I could have possibly followed up such a f***** up event with another mistake, especially while being out on bail.’

He added: ‘I was desperate and thought I could dig myself out of the hole.’

Forced distance is the harshest punishment,’ he said, when talking to DailyMail.com about the most difficult part of prison. ‘The whole concept of human connection really dawns on you when you’re essentially locked in a room and separated from the rest of the world.’

He hopes that people will be entertained with stories regaled in his podcast but says, ‘it all starts with acknowledging that I was wrong, and I violated trust.’

‘I just really need to start from the beginning and go through every step and just kind-of keep it raw and centered and not have an agenda for what’s being told.’

The podcast is set to release on October 20, in collaboration with Notorious. McFarland intends to put 100% of profits toward paying off his $26million owed in restitution. 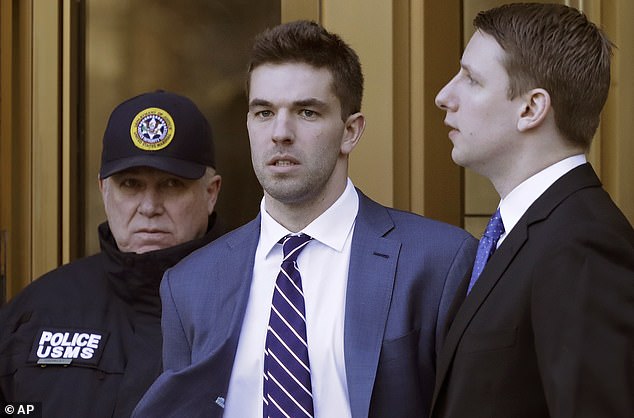 Billy McFarland leaving federal court after pleading guilty to wire fraud charges on March 6, 2018, in New York. Currently 29 months into his six year sentence, McFarland hopes to tell his side of the story in ‘Dumpster Fyre’ a podcast produced in collaboration with Notorious 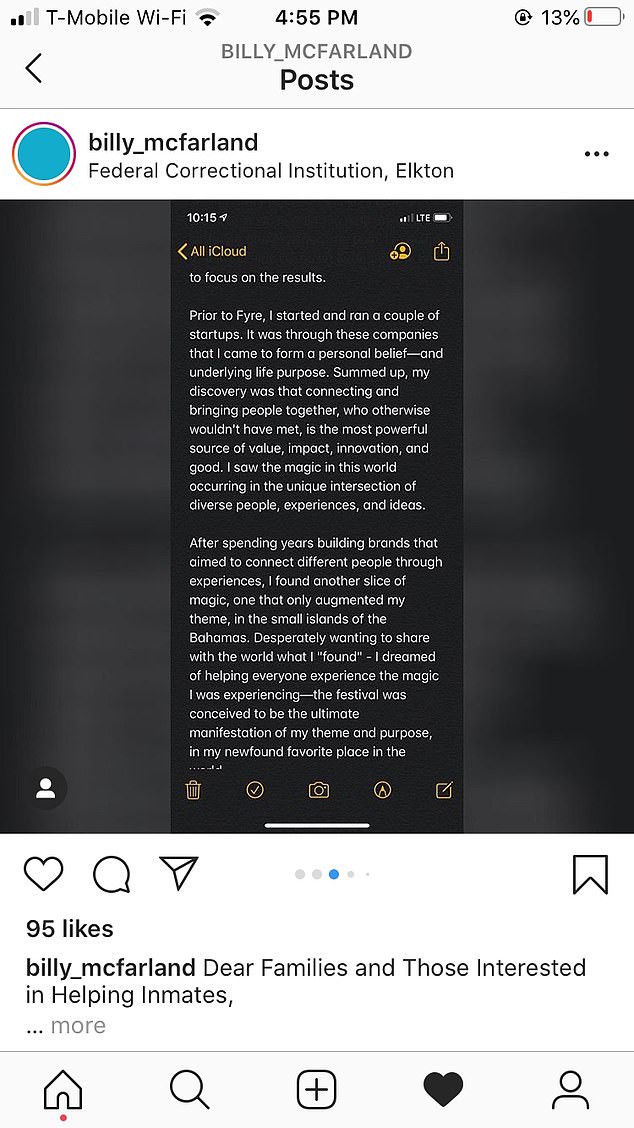 In April, the inmate at Elkton Federal Correctional Facility in Ohio announced his a non-profit, Project-315, which aimed to help to connect inmates with their families during the coronavirus outbreak