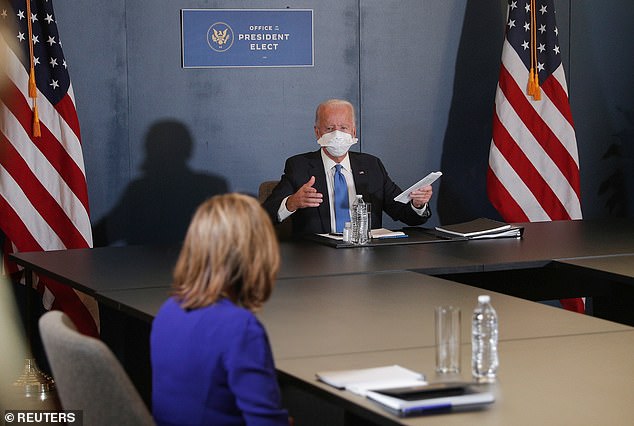 Nancy Pelosi will break her year-long absence from the Oval Office soon as Joe Biden tells her: ‘Mi casa, you casa’

President-elect Joe Biden told House Speaker Nancy Pelosi that after he takes office, she’ll have the run of the Oval Office – a historic room she hasn’t been inside for more than a year.

‘In my Oval Office, mi casa, you casa. I’m going to need you,’ Biden said, looking toward Pelosi during a very brief exchange that media were allowed to witness.

‘I hope we’re going to spend a lot of time together,’ Biden told the two leaders.

‘In my Oval Office, mi casa, you casa,’ President-elect Joe Biden told House Speaker Nancy Pelosi as the two met for the first time since the elections

His remark was a Spanglish variant of ‘mi casa, su casa.’

Although Biden didn’t say it, Pelosi’s absence from the Oval Office has been noted in Washington, where it has been a sign of the fractured relations between President Trump and congressional Democrats.

Trump has repeatedly railed against Democrats and Pelosi, who impeached him last year. Notably, coronavirus negotiations have been between Pelosi and Treasury Secretary Steve Mnuchin, not with Trump.

She was last there in October 2019 for a meeting on Syria. 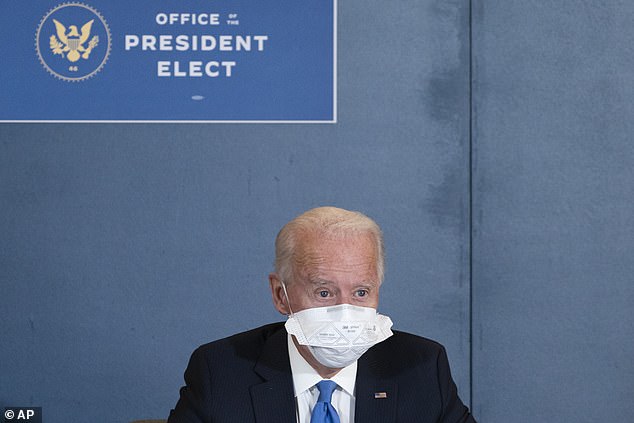 Trump was in Pelosi’s casa – the House of Representatives – during his State of the Union address, where he seemed to ignore her offer of a handhsake and delivered an attack on Democrats.

Pelosi was then seen on camera ripping up a paper copy of Trump’s speech and throwing it in the trash when he was done.

Biden talked a bit about his temporary accommodations during the transition, noting they ‘not as commodious’ as theirs in the Capitol. But he was up-beat. ‘It’s worked out,’ he said.

During a normal transition the president-elect gets government-paid office space.

At one point, it appeared that Pelosi tried to interject, but Biden kept talking.

Biden aides quickly rushed reporters out after providing a glimpse of the event. ‘Thanks everybody,’ he said.

Biden has known and worked with both leaders for decades. All are longtime lawmakers. Biden, who turned 78 Friday, spent 47 years in the Senate. Pelosi, 80, was first elected in 1987. Schumer, 69, was elected to the House in 1980.

If Democrats were to win two Georgia Senate seats, Schumer could become majority leader, which would provide him a key role in confirming Biden nominees and passing legislation. With Republicans in control, it will be Sen. Mitch McConnell who is the gatekeeper.

‘They’re in lockstep agreement that there needs to be emergency assistance and aid during the lame-duck session to help families, to help small businesses,’ she said. ‘There’s no more room for delay, and we need to move forward as quickly as possible.’