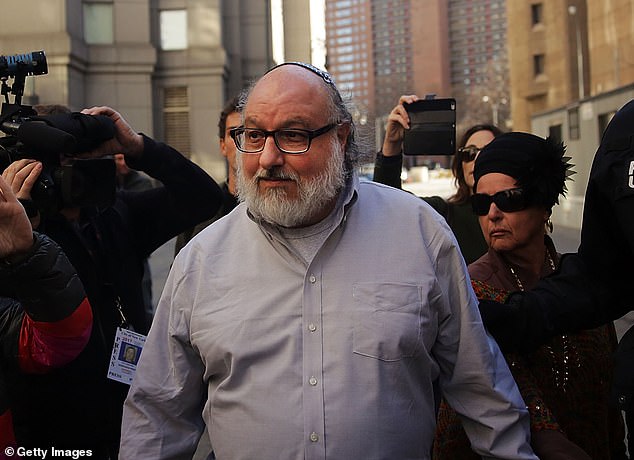 A Jewish American man jailed in 1985 for spying for Israel was released from strict parole conditions Friday, allowing his move to Israel, the US Justice Department said.

Jonathan Pollard, a former Navy intelligence analyst, served 30 years for giving classified US documents and had been confined by parole terms to the United States since his release in 2015, despite Israeli pressure to allow him to leave.

US officials said Pollard, over a series of months and for a salary, provided 1,500 intelligence summaries and 800 classified documents to Israel in the mid-80s.

‘After a review of Mr. Pollard’s case, the US Parole Commission has found that there is no evidence to conclude that he is likely to violate the law,’ the Justice Department said Friday on his release from parole.

Jonathan Pollard was released in November 2015 after serving a 30-year term for passing sensitive security documents to Israel. He has now been released from five-year parole 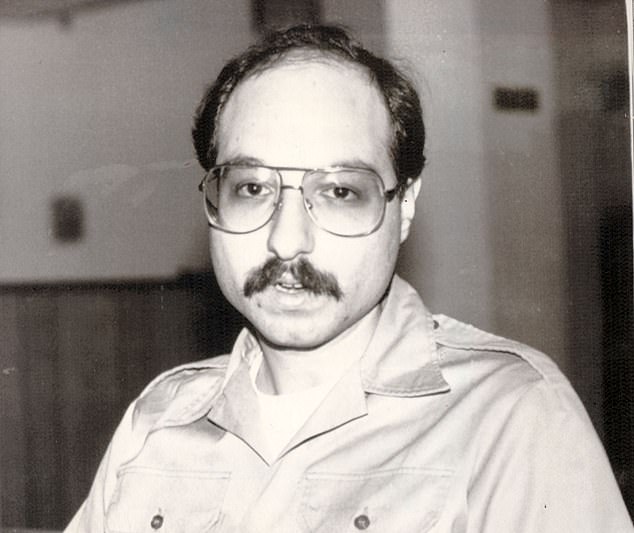 Jonathan Pollard, a former US Naval intelligence analyst convicted of spying for Israel in 1987. US officials said Pollard, over a series of months and for a salary, provided 1,500 intelligence summaries and 800 classified documents to Israel in the mid-80s 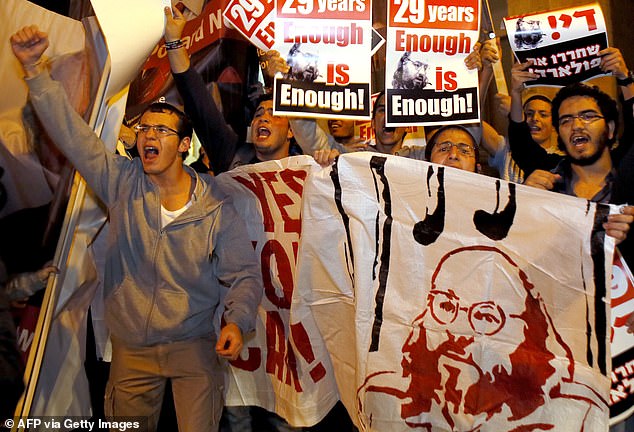 Israeli protesters call for the release of Pollard in 2014 outside the hotel where the US Secretary of State was staying. His case had been a source of tension between the countries

Pollard, 66, was a US Navy intelligence analyst in the mid-1980s when he made contact with an Israeli colonel in New York and began sending US secrets to Israel in exchange for tens of thousands of dollars.

He had passed thousands of crucial US documents to Israel, straining relations between the two close allies.

Israel’s October 1985 raid on the Palestinian Liberation Organization’s Tunis headquarters that killed around 60 people was planned with information from Pollard, according to CIA documents declassified in 2012.

Pollard was arrested in 1985 after trying unsuccessfully to gain asylum at the Israeli Embassy in Washington.

He was sentenced to life in prison two years later, despite pleading guilty in a deal his attorneys expected would result in a more lenient sentence.

After his release in 2015, he remained subject to a curfew, had to wear a wrist monitor, and was prohibited from working for any company that lacked US government monitoring software on its computer systems.

In addition he was restricted from traveling abroad.

The restrictions, his lawyers said, had been ‘insurmountable impediments on Mr. Pollard’s ability to earn a living’.

At the time, they had called on then-President Barack Obama to grant him clemency and permit him to move to Israel immediately.

But the White House quickly shot down that prospect, saying Pollard had committed ‘very serious crimes’ and the president had ‘no intention of altering the terms of Mr. Pollard’s parole.’ 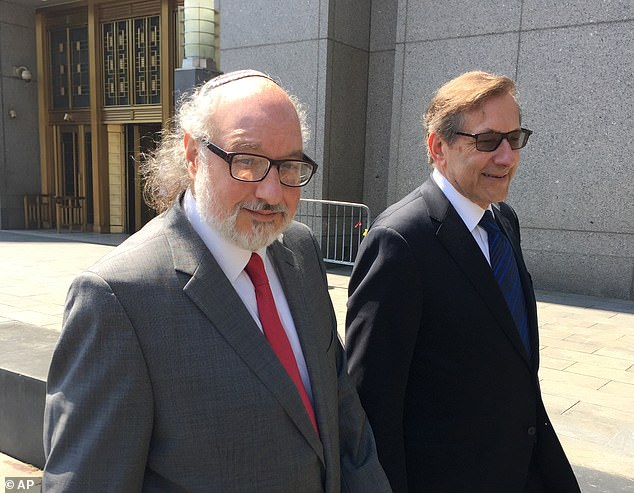 Pollard, left, with his lawyer, Eliot Lauer, as he left a federal court in New York following a hearing in 2016. He served 30 years in prison for a life sentence for espionage 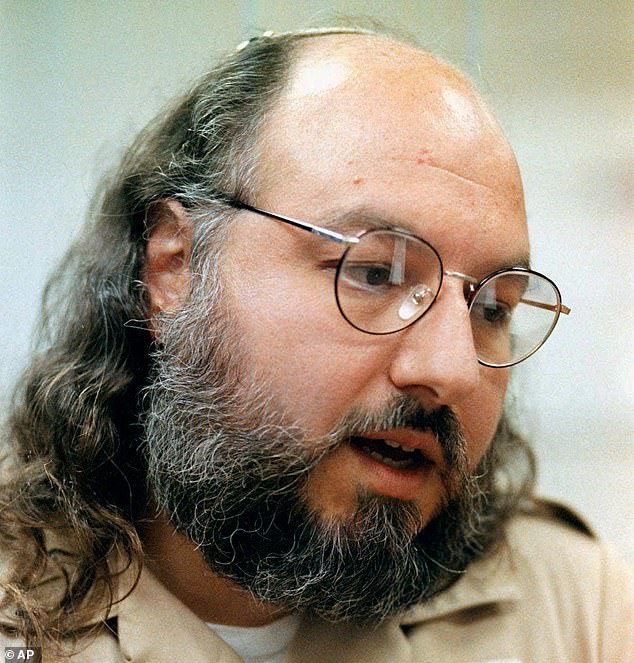 Pollard speaking during an interview in a conference room at the Federal Correction Institution in Butner, North Carolina, where he served 30 years of his sentence until his 2015 release 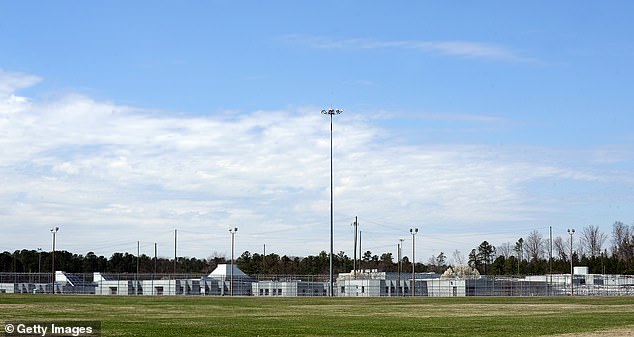 Israel though has repeatedly pressured Washington for the release of Pollard, making it one of the top issues of bilateral relations.

Lauer said Pollard’s legal team informed the Justice Department of Pollard’s ‘exemplary record’ as a prisoner and while on parole and said there was every reason to believe he would stay out of trouble once the conditions are lifted.

‘We are grateful and delighted that our client is finally free of any restrictions, and is now a free man in all respects. We look forward to seeing our client in Israel,’ his lawyers, Eliot Lauer and Jacques Semmelman, said in a statement.

‘Mr. Pollard is happy to finally be able to assist his beloved wife Esther, who is fighting an aggressive form of cancer,’ they added. 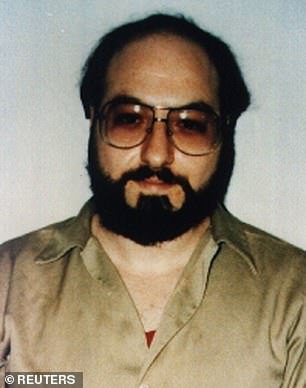 ‘Mr. Pollard would like people to know that it was his wife, more than anyone else, who kept him alive during all the years he was in prison.’

In the statement Pollard also thanked Israeli Prime Minister Benjamin Netanyahu and Ambassador Ron Dermer, for their efforts on his behalf. His case had long been a source of tension between the two countries.

In a statement issued Saturday evening, Netanyahu said he had worked for Pollard’s release for many years. He did not provide a firm date when Pollard might arrive in Israel.

While many in the U.S. view Pollard as a traitor deserving of nothing less than life in jail, his supporters, including Netanyahu, say he was unfairly punished.

His supporters, including many Israeli citizens, have long maintained Pollard’s sentence was too harsh for spying on behalf of a US ally and that he provided information critical to Israel’s security interests at a time when the country was under threat from its Middle East neighbors.

A damage assessment prepared by the U.S. government after Pollard’s arrest found that he had ‘eagerly seized an opportunity to volunteer his services to Israeli intelligence,’ and after receiving formal instructions and operational planning, began making large biweekly deliveries of classified material and collected a monthly salary for it. 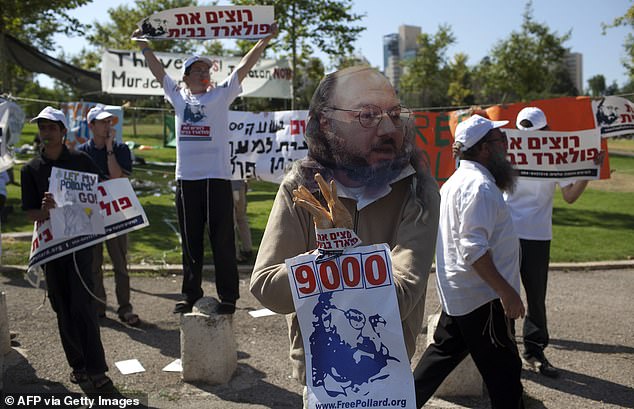 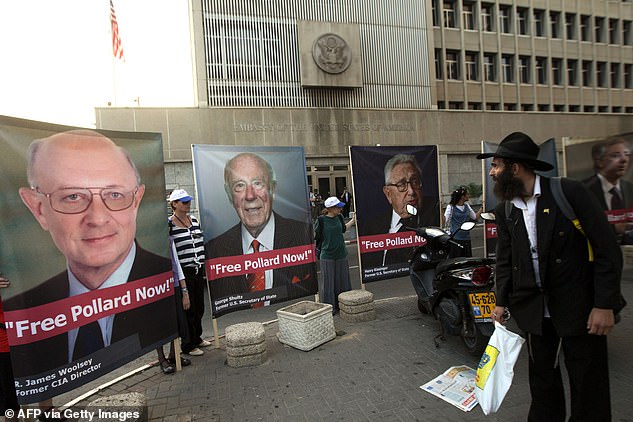 An Israeli man looks at the portraits of former CIA director, Robert James Woolsey, former secretaries of state, George Shultz and Henry Kissinger during a 2012 protest in front of the US embassy in Tel Aviv that called for Pollard’s release. He was released three years later 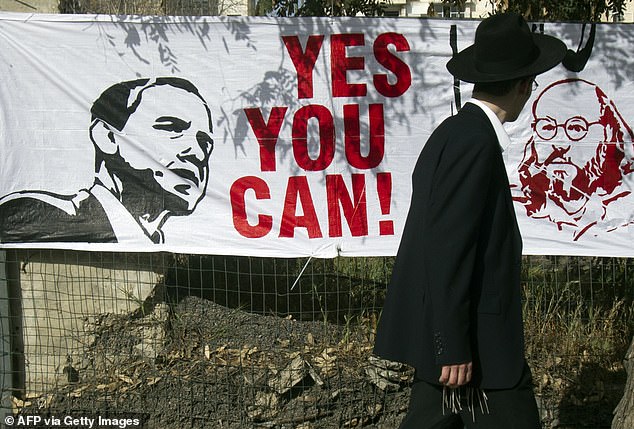 A 2013 banner calling on Obama to release Pollard. His supporters claimed he was duped into pleading guilty with promises of a lenient sentence, but then received a whole-life tariff

Campaigners also claimed Pollard was duped into pleading guilty with promises of a lenient sentence, only to find himself serving a whole-life tariff.

‘It’s something we’ve been hoping for many, many years,’ Pollard’s former lawyer, Alan Dershowitz, said in an interview after the parole announcement.

‘It’s overdue and I’m happy for Jonathan that he’s able now to go to Israel, which is what his wish has been.’

Friday’s decision marked the latest in a string of gestures by the outgoing Trump Administration to Netanyahu’s hardline government.

Pollard was born in Texas, but grew up in the mostly Christian community of South Bend, Indiana, after his family moved there so his father Morris could take up a position at Notre Dame University. 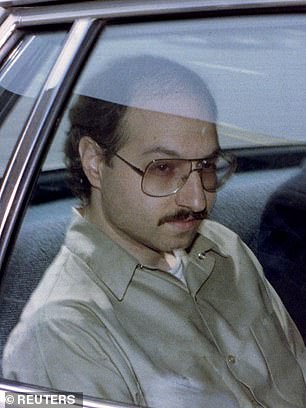 Pollard being driven away from court in 1986

According to CNN, Pollard, an Orthodox Jew, found himself isolated and threatened in the community and turned to his faith for comfort

Speaking to CIA profilers during his time in jail, Pollard said of his youth: ‘I suddenly found myself confronting a community in which racism and bigotry were acceptable social practices.

‘I was never able to establish friendships in my neighborhoods and was compelled to spend most of my time in the city’s Hebrew Day School, where I felt physically safe and emotionally protected.’

There, he worked at the Naval Ocean Surveillance Information Center, rising through the ranks over the course of six years, eventually being granted access to top secret documents.

However, over the course of his career, he also began to harbor resentment against his colleagues, who he felt harbored anti-Israeli sentiments.

Contacted by Israeli intelligence agents some time between late 1983 and early 1984, he eventually agreed to start passing information to them regarding their Arab enemies in the Middle East.

However, his supervisors soon noticed that he was handling information that had nothing to do with his area of operations, and eventually saw him carrying documents out of the building in 1985.

He was reported to the FBI and five days later, alongside then-wife Anne, he was traced to the Israeli embassy in Washington where they were attempting to apply for asylum. 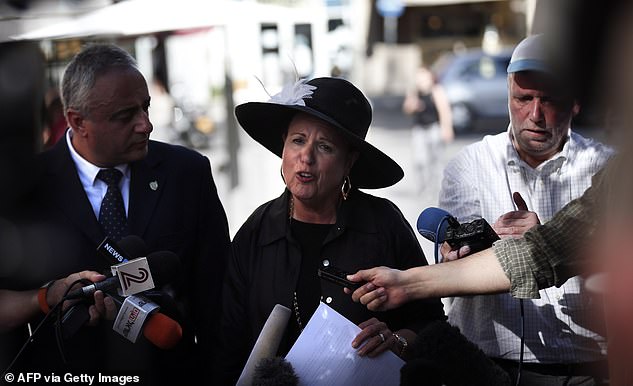 Pollard’s second wife Esther who he married while in prison. His first wife Anne was sentenced to five years behind bars as an accessory to his espionage crimes but was released in 1990 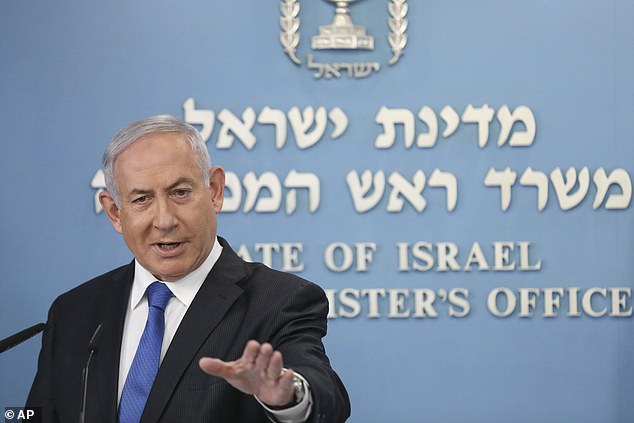 On November 21, 1985, he and his wife were ejected from the embassy and into the waiting arms of FBI agents, where they were promptly arrested.

He pleaded guilty in 1986 to conspiracy to commit espionage and was given a life sentence in 1987. Wife Anne was sentenced to five years behind bars as an accessory.

After just two years in jail, Anne was sent to a halfway house in Brooklyn, before eventually being set free in 1990.

Shortly after her release, as she lay in a bed at New York’s Mount Sinai hospital with a stomach condition, a man posing as a doctor served her with divorce papers from Pollard.

According to the LA Times, Pollard cited ‘irreconcilable differences’ at the time, despite the fact that the pair had not seen each other in years. The pair were separated shortly afterwards.

That same year, however, Pollard found himself involved in another unexpected romance after Esther Zeitz, a woman he had met in Israel in 1971, began writing to him.

The pair continued writing to one another over the next three years, and in 1993, Esther traveled to North Carolina where the pair were married in a secret ceremony.

In one of his limited press interviews in 1998, Pollard himself expressed remorse over what he had done, though maintained that he had been duped into a confession.

He said: ‘There is nothing good that came as a result of my actions. I tried to serve two countries at the same time. That does not work.’

He also expressed regret for the way he handled feelings of resentment against his colleagues, saying that he should have traveled to Israel and helped the government from there, rather than turning traitor.

During his time in jail, Pollard missed the funerals of both his mother, Molly, who died in 2001, and father Morris, who passed away in 2011.