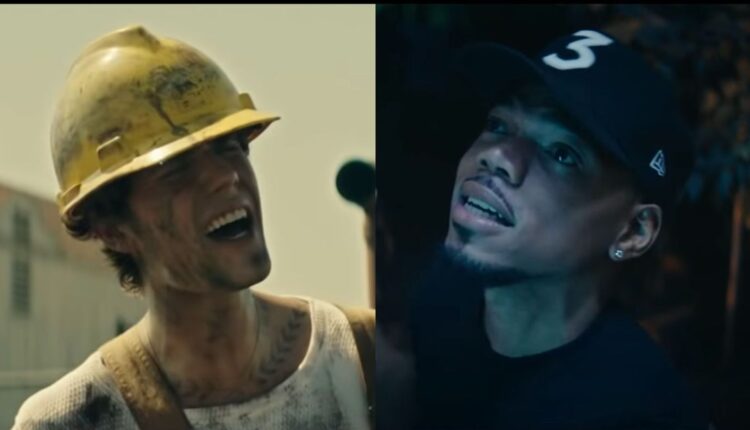 Justin Bieber‘s new era is here — and he’s taken a job working at an oil plant.

At least, that’s the Bieber we see in his folksy new video for “Holy,” a five-minute parable that feels as wholesome as a Hallmark movie. It’s about the trials and hardships of love and life, but not quite in the same way as his 2020 album Changes. Most notably different is the absence of his wife, Hailey, and the fact that the sepia-soaked vision finds Bieber playing a character. No, he’s not playing Drake this time; instead, he’s just a guy trying to keep it all together.

As Bieber said on social media ahead of the “Holy” release, he — along with the creative team behind the visual, led by director Colin Tilley — views it not as just a music video, but as a movie. So, in this particular film, Bieber and his romantic partner (played by Ryan Destiny) are blue-collar, everyday people, he at his oil gig and she in her element at a nursing home. They wake up staring into each other’s eyes and kiss in front of sunset-glowing windows.

It’s all very nice. But some bad things happen: His plant shuts down and his job disappears. She loses a beloved patient. They lose their place to live. Remember, though, that this song is called “Holy,” and that its we-can-make-it-as-long-as-we’re-together refrain goes, “The way you hold me / Feels so holy,” with a bunch of repetitions thrown in. I won’t spoil the ending, but you can guess the general direction of the resolution. (What you probably won’t guess is the presence of Wilmer Valderrama, who arrives just in time.)

Musically, “Holy” revels in mid-tempo gospel-influenced pop, which makes the perfect backdrop over which guest Chance the Rapper can do his thing, including rapping, “I know we believe in God and I know God believes in us.” Bieber himself switches up his singing style slightly, taking a step or two away from R&B to better accommodate the more spiritual new terrain.

It’s been billed in the lead-up as Bieber’s “new era,” and “Holy” does indeed seem to signal a new period for the pop star, who had spent most of late 2019 and early 2020 re-emerging as a reformed bad boy who’d settled into a loving and fruitful marriage (and made an entire album and docuseries about it). Watch Bieber and Chance’s new movie, “Holy,” above.

Jamila Woods Bares All In Her Sulty, NSFW ‘Sula’ Video