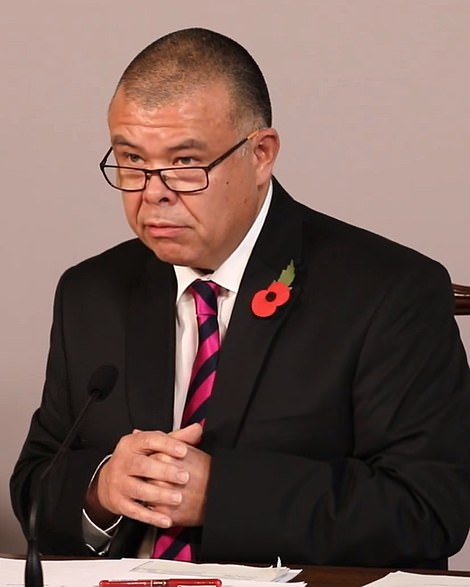 England’s deputy chief medical officer has said he would be ‘at the front of the queue’ to take Pfizer’s breakthrough coronavirus vaccine, in a bid to calm public fears about its safety.

Four in ten Brits have said politicians and Government advisers should take the jab – which was shown to protect nine in 10 people from catching Covid-19 – first to show it is safe, according to a Daily Mail poll today.

Professor Jonathan Van-Tam said if he could ‘rightly and morally’ justify receiving it over more vulnerable people then he would do so, because he has ‘absolute trust’ in Britain’s medical watchdog.

Full data on Pfizer’s vaccine will be published this month and it’ll need to get the green light from the Medicines and Healthcare Regulatory Agency (MHRA) before it is deemed safe enough to dish out to millions of Brits. This process is expected to be wrapped up within weeks and the NHS is on standby to start deploying the shot by December 1.

At a press conference this morning, the deputy CMO also said he had encouraged his 78-year-old mother to be ready to take the jab as soon as possible.

Britain is getting ready to launch the biggest immunisation drive in British history after data showed American drug giant Pfizer’s vaccine was 90 per cent effective.

Hopes were raised further yesterday when prominent Government scientists claimed life would return to normal by Easter without the need for draconian lockdown rules.

But Professor Van-Tam poured cold water on the idea of a pre-Covid normality by spring because of the colossal logistical challenge ahead. He said the production and deployment of the vaccines ‘wasn’t going to be instant’.

It emerged yesterday that retired doctors and medical students will be drafted in to help dispense vaccines from a thousand GP surgeries around the country. The army will also be used to help transport the vaccines between labs and clinics.

Professor Van-Tam also pointed out that it’s unclear if the vaccine will prevent people from passing the disease to others, or if it just protects people from falling ill.

There’s still a small chance people who are immunised can harbour Covid-19 without ever knowing and spread it to other people – which happens with young children who get the flu. 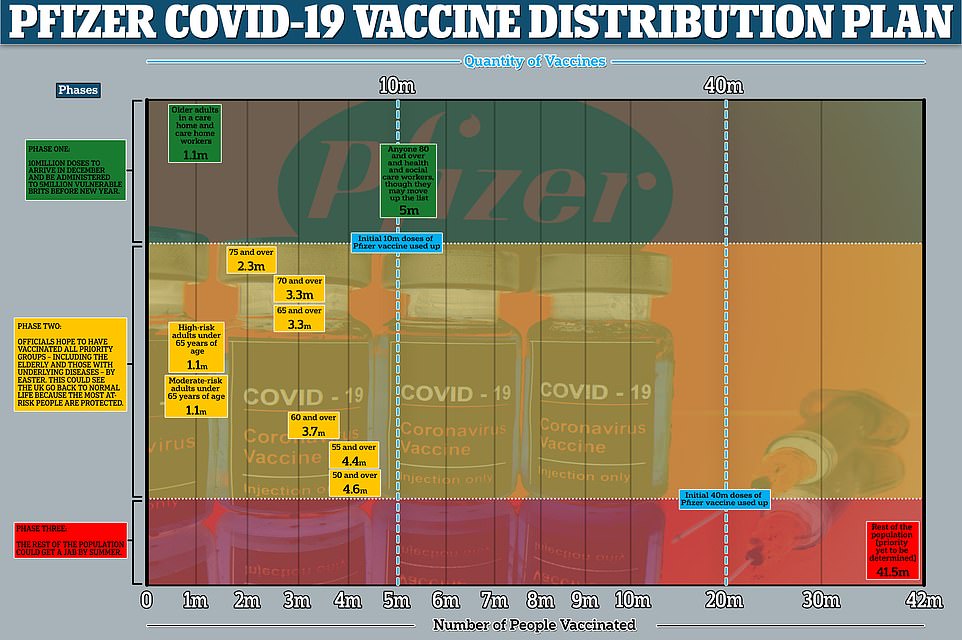 Asked whether the country could return to a pre-Covid normality by Easter, Professor Van-Tam told a press conference today: ‘At this point I don’t think those questions can be answered.

The Queen and rest of Royal Family WON’T be able to jump the queue for Covid vaccine, rich people will be banned from buying jab and even Boris will have to wait his turn

The Queen and the rest of the Royal Family will not be able to jump the queue for a Covid-19 vaccine and even Boris Johnson will have to wait his turn, it was revealed today.

No one will be given ‘special treatment’ when the country launches its mass-immunisation drive next month, according to a senior Government source who has assured the public the jabs will only be obtainable through the NHS. Even rich companies won’t be able to skip the line.

Guidance from the Joint Committee on Vaccination and Immunisation (JCVI), published in September, said care home residents and their carers will be at the top of the pecking order. Those over 80 will be next in the queue, including the Queen at 94-years-old, followed by those over 75, over-70s, over-65s and high-risk adults under 65.

According to the priority list, Prince Charles, 71, would be among the fourth group to get access, with the Prime Minister, at 56, placed ninth in the over-55s and Prince William, 38, in the last group, 11th in line for the jab.

The Prince of Wales, Mr Johnson and the Duke of Cambridge have all had the virus, but scientists are still unsure on the truth on immunity due to Covid-19 having only been around since January – meaning its long-term effects are still unclear.

There have also been fears wealthy corporations would try to snap up vaccines directly from the manufacturer to get their staff back to work and make up for the money haemorrhaged during lockdown.  This raised concerns that it could limit the number of vaccines available to the British public. However, the Department of Health has assured people this will not happen.

Plans for the mass-vaccination programme were jolted into motion on Monday when American drugs giant Pfizer – the company which makes Viagra – released early data showing its vaccine can prevent nine in 10 people from catching Covid-19.

It comes as family doctors are set to start the mammoth operation of vaccinating millions against Covid-19 within weeks. NHS England has told GPs to be ready to deliver the jabs between 8am and 8pm ‘seven days a week’ once a vaccine is approved.

Staff at more than 1,200 GP surgeries are being asked to administer the jabs inside care homes and at designated sites across the country. Mass vaccination centres are being set up at sports halls, sports grounds and shopping centres with the Army put on standby in ‘the biggest logistical effort since the Second World War’.

‘We don’t yet know if this vaccine is going to prevent transmission as well as preventing illness, and from that perspective it would be wrong of me to give you a sense that whoever told you that we’d be completely back to normal for Easter is right.

‘I don’t think I know the answer to that. I think I can tell you that I’m very hopeful that over time vaccines will make a very important difference to how we have to live with Covid-19 in the long run.’

About 1,200 GP surgeries are preparing to start dishing out a million Covid-19 jabs every week from December 1, so long as a vaccine sails through approval by then.

Plans for the mass-vaccination programme were kicked into motion on Monday when Pfizer – the company which makes Viagra – released early data showing its vaccine can prevent nine in 10 people from catching Covid-19.

Matt Hancock has promised the NHS will work around the clock to get the country vaccinated, with practices open between 8am and 8pm seven days a week.

But the Health Secretary admitted it’ll be a ‘colossal’ undertaking, with the army, as well as medical and nursing students, and retired medics, being drafted in to help.

GPs have warned they’ll need all the extra staff they can get to juggle delivering the vaccines while trying to get non-Covid appointments back up and running.

The priority groups for vaccination depend on which vaccines are approved and what groups of people they have been tested on.

Officials will only use a vaccine on elderly people, for example, if that jab has worked well for elderly people in a clinical trial. It will not give a group of people a vaccine that has not been tested on people similar to them in trials.

The general population will be last to get their hands on a vaccine and they will most likely be prioritised based on age or underlying conditions. It is likely to be more than six months before healthy young adults get access.

Experts have said it is worth getting everyone vaccinated against coronavirus with Pfizer’s jab should it be approved, even though early results suggest it doesn’t trigger an immune response in one in ten people, because this will help to protect others and the most vulnerable from the virus.

They added that in those where the vaccine is unlikely to stop them catching Covid-19 it could still make a severe infection less likely, helping to protect them from being hospitalised and stop the NHS from becoming overwhelmed.

It follows Sir John Bell, a medicine professor at the University of Oxford, saying on Tuesday he was ’70 to 80 per cent’ sure that life could start to return to normal in Britain after Easter.

But he warned it was now on ministers to hold up their end of the deal by ensuring any approved vaccine is rolled out smoothly to vulnerable groups who are most at risk of falling victim to Covid-19.

Speaking to the House of Commons Science and Technology Committee about Pfizer’s vaccine news on Tuesday, he said: ‘I think this journey to a vaccine has been a long journey and I think there’s a risk that people will underestimate the importance of the announcement yesterday and that is the big challenge here was to find a vaccine that actually had efficacy against this virus. There are many pathogens for which we have looked for decades and not found a vaccine that works.

‘It’ll be hard to distribute as it has to be distributed at -80C which will be complicated but it also signals I think that many of the other vaccines that have the same immunogenicity are likely also to be efficacious.  So I wouldn’t be surprised if we hit the new year with two or three vaccines, all of which could be distributed.’

He added: ‘And that’s why I’m quite optimistic of getting enough vaccinations done in the first quarter of next year that by spring things will start to look much more normal than they do now.’

Asked how realistic is it to think the UK could be back to normal by the spring, Sir John told MPs: ‘I think we’ve got a 70 to 80 per cent chance of doing that. That’s provided they don’t screw up the distribution of the vaccine, that’s not my job, but providing they don’t screw that up it will all be fine.’

Davido Shows Off Ifeanyi On ‘A Better Time’ Album Tracklist