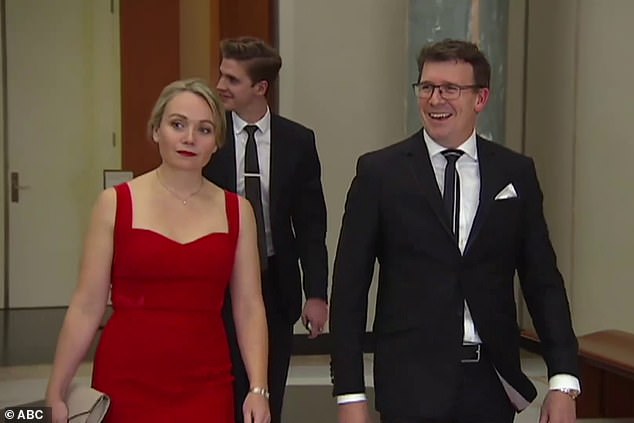 Labor have banned all ministers from sleeping with members of staff in the messy fallout from Alan Tudge’s affair scandal.

Party leader Anthony Albanese made the announcement which prevents all members of parliament from entering a sexual relationship with any of their colleagues.

‘Labor believes that workplaces must be safe places, whether in MPs’ offices or any other workplace,’ Mr Albanese told SMH.

The party met on Tuesday under Mr Albanese’s chief of staff Tim Gartrell, who stressed the party’s expectations for the behaviour of ministers.

Labor have banned ministers from having sex with staff after Alan Tudge scandal. Pictured: Alan Tudge arrives at the Midwinter Ball with staffer Rachelle Miller during their affair in 2017 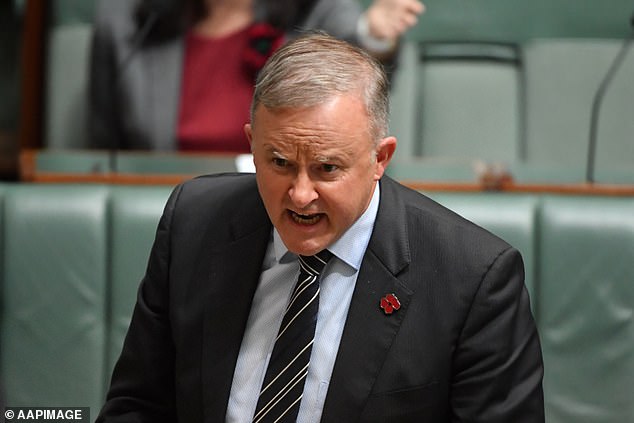 ‘Tim outlined how Labor wants a safe work environment for all staffers – particularly women, the doors are always open for support and confidentiality will always be protected,’ a source from the meeting said.

The ban stretches further than the Liberal party ‘bonk ban’, which allowed backbenchers to sleep with staff.

Despite the new ban, Prime Minister Scott Morrison made no calls to extend his party ban to include backbenchers.

The ban comes after a secret affair between former Coalition media adviser Rachelle Miller and then Minister for Human Services Alan Tudge in 2017 was exposed on Four Corners on Monday night.

The show also reported Attorney General Christian Porter got close with a ‘young woman’ at Canberra’s Public Bar in 2017, which he has categorically denied.

The secret affair between Mr Tudge and the female staffer came before then-Prime Minister Malcolm Turnbull introduced a bonk ban in February 2018 to stop politicians from having sexual relationships with staffers in their office. 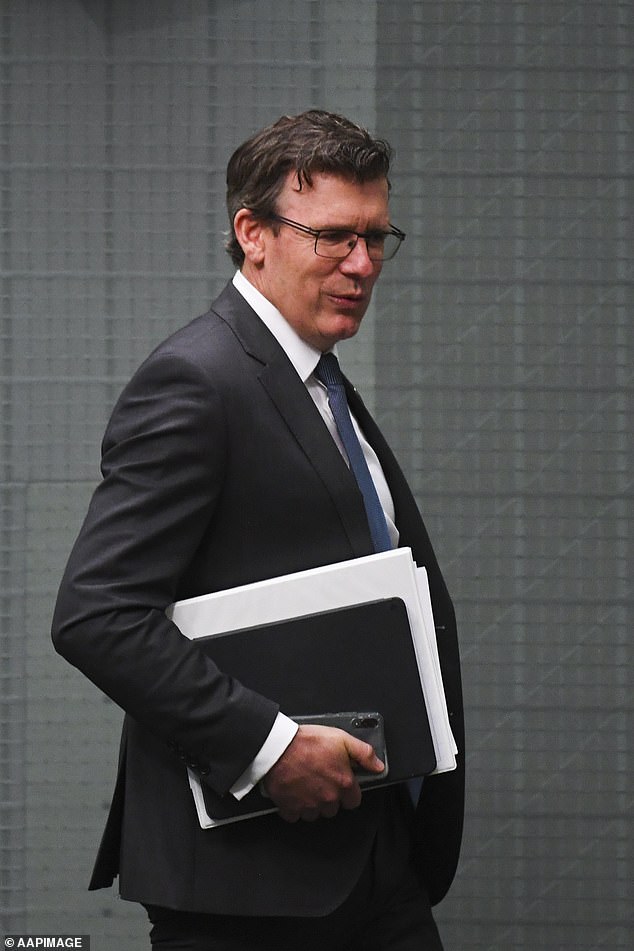 Both Ms Miller and Mr Tudge were married during their six month affair and have since separated from their partners.

Ms Miller has lodged a formal complaint regarding the way she was treated in office after the affair and accused federal Employment Minister Michaelia Cash of forcing her out of her office through a ‘fake redundancy’ process.

She said she was punished because of her affair and accused Senator Cash of months of poor treatment during the first half of 2018.

The complaint says Ms Miller felt ambushed in April 2018 with a request to go on leave, was asked whether personal issues were undermining her work, and was excluded from meetings.

In June 2018, Ms Miller was told the office was being restructured and her role would be made redundant.

Ms Miller was told she could apply for a more junior role.

‘It was very clear that this was a fake redundancy process put in place to get rid of me from the office,’ she wrote in a complaint to the Department of Finance.

‘There were no grounds for this, there had been no performance management process put in place, nor had I received formal warnings.’

‘The minister strenuously rejects claims of any adverse treatment of Ms Miller by her, or her office, and strongly disputes Ms Miller’s version of events,’ a spokesman told Australian Associated Press.

‘At the time of her employment, between late 2017 and mid-2018, the minister and the office understood Ms Miller’s personal circumstances which is why support, leave and flexible work arrangements were offered to her.

‘Given the matter is now subject to a formal process in the Department of Finance, the minister will not be commenting further.’

Ms Miller has lodged a separate complaint against Mr Tudge, accusing him of bullying and intimidation.

In a social media post shared on Tuesday afternoon, Ms Miller questioned parliament’s culture and its effect on women, asking if Mr Morrison would take her concerns seriously after she made a formal complaint. 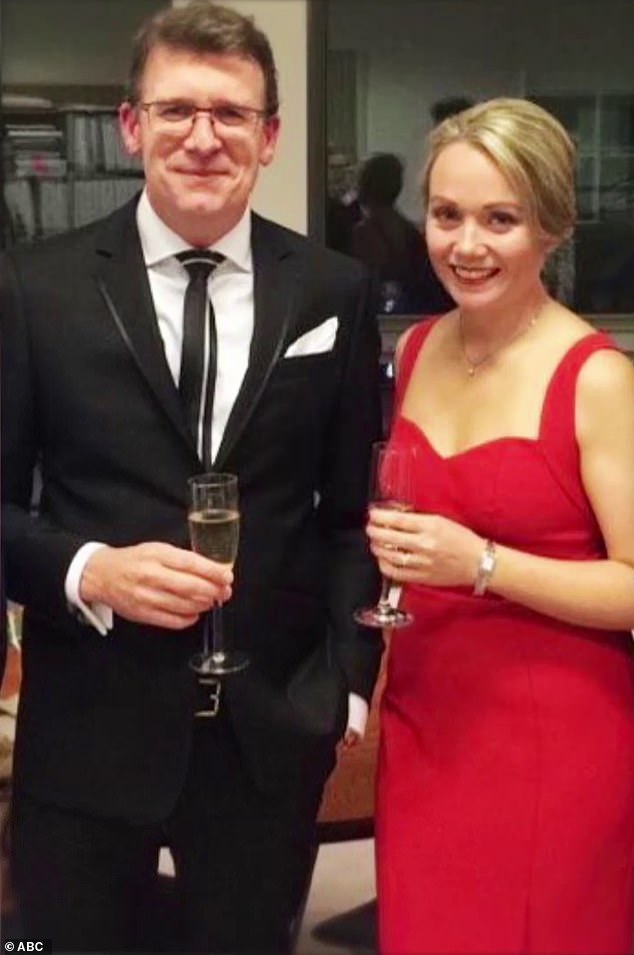 Smile! Alan Tudge and Rachelle Miller pose together at the Midwinter Ball in 2017

‘Scott Morrison, it’s not about the #bonkban. It’s about how I was treated in our workplace, which ended my career!’ she said.

‘Those ministers were promoted, I was black-listed. I made a formal complaint, will you ensure it’s investigated?’

Ms Miller told the investigation she was demoted in a restructuring and eventually decided she had little choice but to leave politics altogether.

Mr Turnbull’s wife Lucy supported Ms Miller in her claim she was mistreated.

‘Totally unfair on women like Rachelle Miller caught in this. However consensual relationships are, women pay the price,’ Ms Turnbull wrote on Twitter.

She added to her post the hashtag titled ‘change the blokey bubble’.

Ms Miller said she has lived ‘to bitterly regret’ the affair with Mr Tudge – with whom she attended the Midwinter Ball at Parliament House. 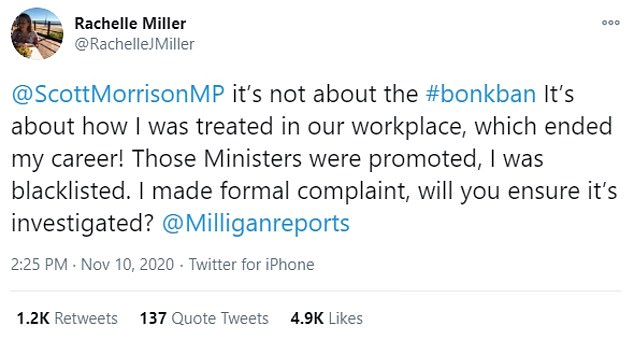 She claimed while she didn’t want to be seen on camera with the minister, he had insisted on walking into the high-profile event with her by his side.

‘I intentionally dropped back because I didn’t want to walk in with him,’ she said.

‘He stopped and turned around and said, ‘No, I want you to walk in with me’.

‘I have a feeling that my appearance had a bearing on why Alan would want to walk in with me on his arm, and I felt at that time a lot like an ornament, and that I was being used as an ornament.’

Ms Miller, who has since left politics, claimed Mr Tudge had pressured her not to reveal the affair to the media after rumours of the tryst circulated around the press gallery.

‘I lost a lot of self-confidence because I didn’t feel I had any power at all to be able to stand up for myself,’ she said.

‘I knew I was leaving a job that I really loved, but I didn’t see that there was any other way out.

Mr Tudge issued a statement after the program aired on Monday night.

‘Tonight, matters that occurred in my personal life in 2017 were aired on the ABC’s Four Corners program,’ he said.

‘I regret my actions immensely and the hurt it caused my family. I also regret the hurt that Ms Miller has experienced.’