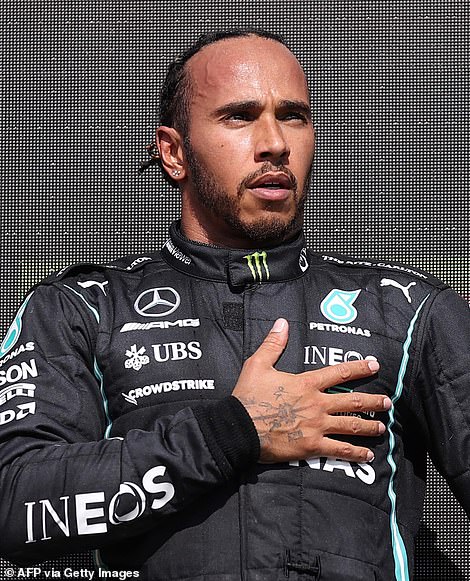 Facebook is today under even more pressure to ‘eliminate’ racist abuse on Instagram after Lewis Hamilton was bombarded with monkey emojis and called a gorilla after winning the British Grand Prix in controversial fashion yesterday.

Mercedes has hinted that police should investigate some of the vile slurs aimed at their star driver and called on social media companies to do more to stop racist posts before they go online – and close the accounts of the culprits.

Seven-time world champion Hamilton, 36, was involved in a crash that saw championship leader and rival Max Verstappen plough his Red Bull into a wall and out of the race at Silverstone.

Hamilton, who is a vocal supporter of the BLM movement is leading a campaign for more racing drivers from black and ethnic minority groups, was hit by a 10 second penalty but went on to win the race and close the gap in the title race to just eight points.

Following the race, Sir Lewis received a slew of racist abuse including monkey and gorilla emojis on Instagram – the platform of choice for racists who abused Bukayo Saka, Jadon Sancho and Marcus Rashford after their penalty misses in the Euro 2020 final this month.

Today Mercedes, Hamilton’s team, released a joint statement with Formula One and the sport’s governing body, the FIA, condemning the abuse, and piled more pressure on social media giants to take steps to filter comments, ban racists and help police punish them if necessary.

‘Formula 1, The FIA and Mercedes-AMG Petronas F1 Team condemn this behaviour in the strongest possible terms’, they said.

‘These people have no place in our sport and we urge that those responsible should be held accountable for their actions. Formula 1, the FIA, the drivers and the teams are working to build a more diverse and inclusive sport, and such unacceptable instances of online abuse must be highlighted and eliminated.’

Facebook, which owns Instagram, insists it is filtering comments but insisted ‘no single thing will fix this challenge overnight’.

A spokesman said: ‘In addition to our work to remove comments and accounts that repeatedly break our rules, there are safety features available, including Comment Filters and Message Controls, which can mean no one has to see this type of abuse. No single thing will fix this challenge overnight but we’re committed to the work to keep our community safe from abuse.’ 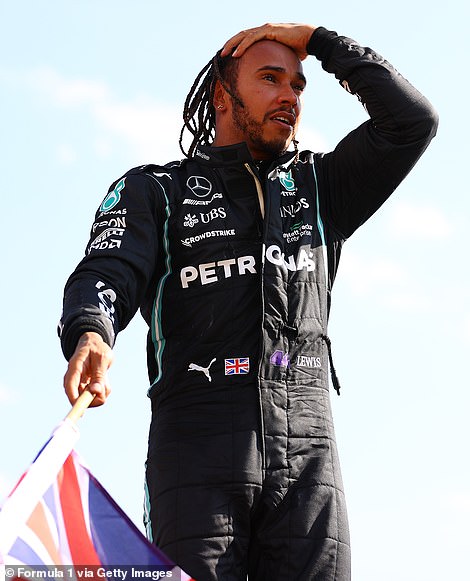 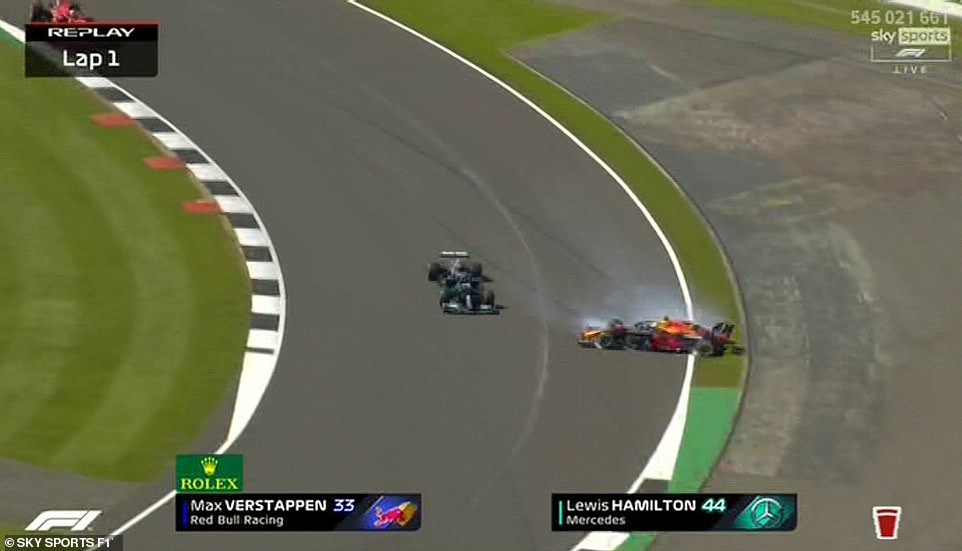 Hamilton was abused after he was involved in a crash with Max Verstappen during the first lap, before he went on to win 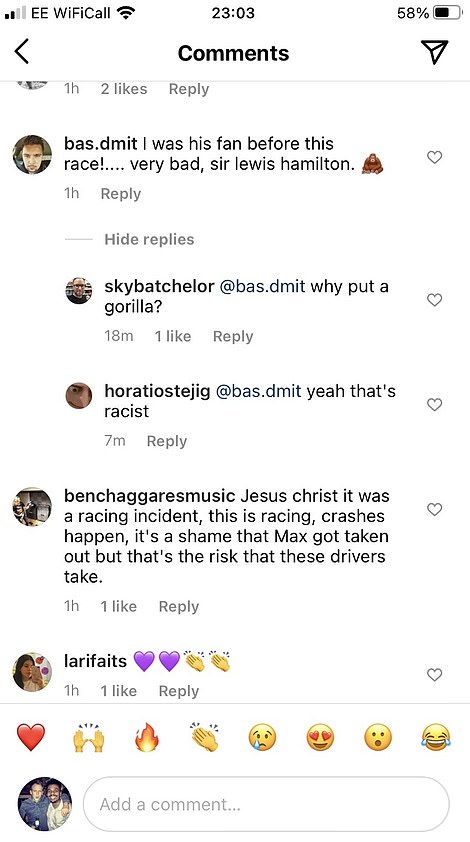 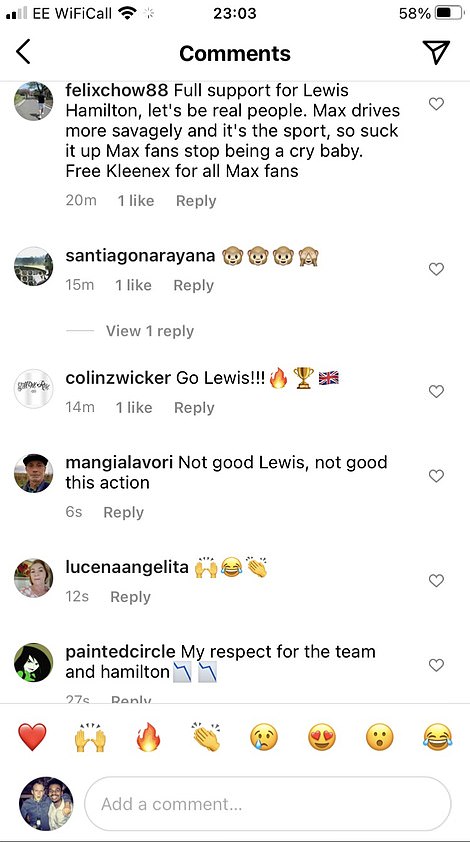 Today Formula One released a joint statement with the sport’s governing body, the FIA, and Hamilton’s team Mercedes-AMG Petronas condemning the abuse

Lewis Hamilton was accused of risking Max Verstappen’s life in the 180mph collision that overshadowed the Briton’s victory at Silverstone on Sunday.

Verstappen, who was taken to hospital for checks, also called him ‘disrespectful’ and ‘unsportsmanlike’ after their opening-lap collision in front of 140,000 fans.

But Hamilton, 36, said he had nothing to apologise for after slashing the deficit to his Dutch rival to eight points in what is now the hottest title fight of the century.

Asked if Hamilton’s move at Copse corner could have killed his driver, Red Bull chief Christian Horner said: ‘Of course. His actions have put in jeopardy another driver’s safety and for me that is unacceptable.

‘Every driver knows that a move at that corner — one of the fastest in Formula One — is a massive, massive risk.

‘You don’t put a wheel up the inside without there being huge consequences. We are lucky today that there wasn’t someone seriously hurt.

‘What I am most angry about is the lack of judgment, and the desperation in this move. It was never on.’

Hamilton is yet to comment on the abuse but last week issued a post after Marcus Rashford, Jordan Sancho and Bukayo Saka were racially abused following England’s Euro 2020 final defeat against Italy at Wembley.

He wrote: ‘The racial abuse on social media towards our players after yesterday’s game is unacceptable. This sort of ignorance has to be stopped.

Earlier in 2021, Hamilton was the first recipient of the Laureus Athlete Advocate of the Year award due to his involvement in the fight against racism.

The 36-year-old has frequently spoken about fighting racism and has pushed for increased diversity in Formula One.

Last year Hamilton hit out at the Formula One community over a lack of racial diversity amid the George Floyd protests.

The seven-time world champion – – the only black driver to ever race in the competition – said he felt isolated in trying to combat racial discrimination in a sporting discipline he described as ‘white dominated’.

In a post on Instagram, he said: ‘I see those of you staying silent, some of you the biggest stars yet you stay in the midst of injustice.

‘Not a sign from anybody in my industry which of course is a white dominated sport. I’m one of the only people of colour there yet I stand alone. I would have thought by now you would see why this happens and say something about it but you can’t stand alongside us.

‘Just know I know who you are and I see you.’

Last year, Hamilton established the Hamilton Commission with the Royal Academy of Engineering, which is attempting to help more young people from black backgrounds to be employed in motorsport or in other engineering sectors.

Alongside his anti-racism campaigns, Hamilton is a well known social activist, championing fashionable causes including veganism.

But he has also in the past taken criticism from lecturing the world on green issues, while making millions from a gas-guzzling sport which sees teams clock up more than 100,000 air miles each season as they jet to tracks across the world.

In 2019 he sold his £25million candy red private jet to help reduce his carbon emissions.

Hamilton is now worth some £250million with a home in the millionaires’ enclave of Monaco, where his collection of shoes alone spans two rooms. 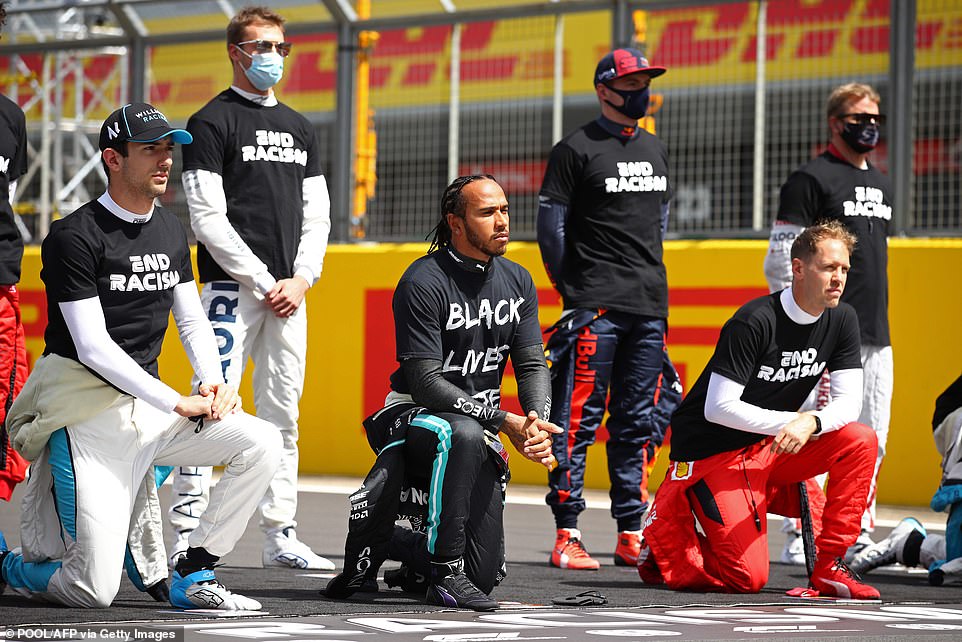 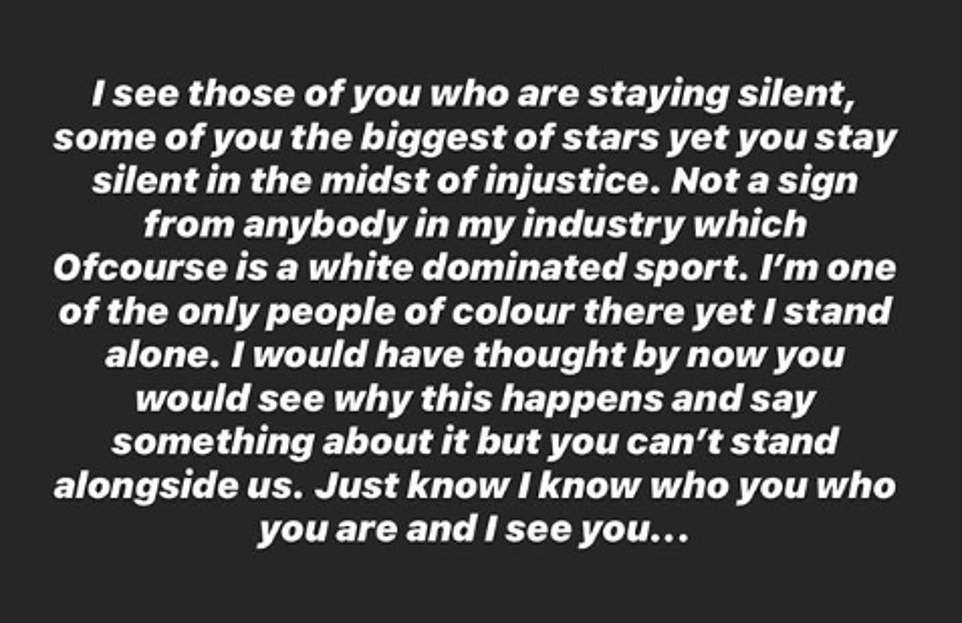 Last year, Hamilton criticised the lack of racial diversity in his own sporting discipline on Instagram

He grew up in a small end of terrace home in Stevenage, and began his venture into motorsport at the tender age of just five, when his father bought him a remote controlled car.

Hamilton began karting in 1993 and quickly began winning races and cadet class championships – becoming the youngest driver to win the British cadet karting championship at the age of ten.

He got his break in Formula One in 2007,  partnering two-time and defending World Champion Fernando Alonso at McLaren – becoming the first and so far only black driver to race in the competition.

He finished runner-up of the championships in his debut season, losing by a point. The following year he won by the same margin. He has since scooped six championships – and is battling it out with Verstappen for a seventh.

Hamilton has often talked about his background and experience in F1 – including the racial abuse he suffered even in karting as a young boy.

Hamilton’s father, who had to remortgage his house and spend all his and his second wife’s savings just to get his son into karting for a year, was also the victim of abuse.

While Hamilton has won plenty of praise for sharing his experience, his comments have not always provoked a positive reaction.

He upset residents in his hometown of Stevenage by saying it had been his dream to ‘get out of the slums’ while collecting a BBC Sports Personality of the Year Award in 2018.

The leader of Stevenage Borough Council at the time said it was ‘disappointing’ and people felt ‘very offended’.

He later apologised, saying: ‘I wanted to take a second to send a message to people back in the UK, but also to people in Stevenage where I grew up.

‘It’s somewhere I’m incredibly proud of coming from and still love to this day.’

Lewis Hamilton vows to continue to race ‘hard but fairly’ after rival Max Verstappen accused him of being ‘dangerous, disrespectful and unsportsmanlike’ following 190mph opening lap crash at Silverstone

Lewis Hamilton said he will continue to race ‘hard but fairly’ after Max Verstappen accused the Briton of being dangerous, disrespectful and unsportsmanlike following their 190mph collision at the British Grand Prix.

Verstappen was released from hospital at 10pm on Sunday night, seven hours after his high-speed crash with Hamilton on the opening lap of the Silverstone race.

Hamilton was dealt a 10-second penalty for the accident.

But he recovered from fourth to pass Ferrari’s Charles Leclerc for victory with two laps remaining, slashing the championship deficit to Verstappen from 33 points to just eight.

Following the crash, Verstappen was taken in an ambulance to the on-track medical centre and then to Coventry Hospital, 40 miles outside of Silverstone, for further checks and a CT scan. 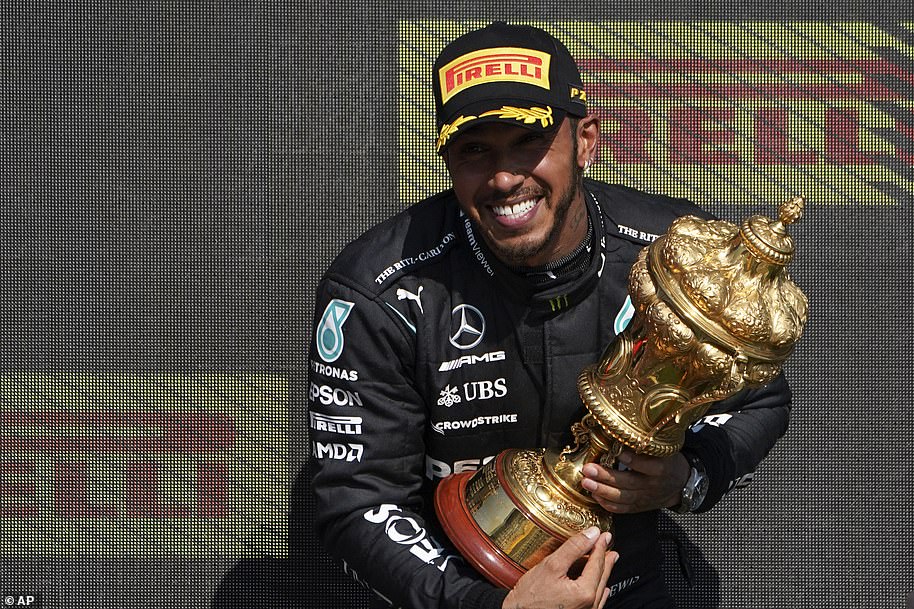 His Red Bull team confirmed he was given the all-clear to leave ‘without any major injuries’ late on Sunday night.

Earlier, Verstappen tweeted: ‘Glad I’m OK. Very disappointed with being taken out like this. The penalty given does not help us and doesn’t do justice to the dangerous move Lewis made on track.

‘Watching the celebrations while still in hospital is disrespectful and unsportsmanlike behaviour but we move on.’

Hamilton responded by saying: ‘Today is a reminder of the dangers in this sport. I send my best wishes to Max who is an incredible competitor. I’m glad to hear he is OK.

‘I will always race hard but always fairly. My team showed grit and perseverance out there. It’s a dream to win in front of my home crowd.’

Hamilton also said he has nothing to apologise for after Christian Horner said he put Verstappen’s life in danger.

Horner said: ‘His actions have left in jeopardy another driver’s safety and for me that is unacceptable.

‘Every grand prix driver knows that a move at that corner – one of the fastest in Formula One – is a massive, massive risk. 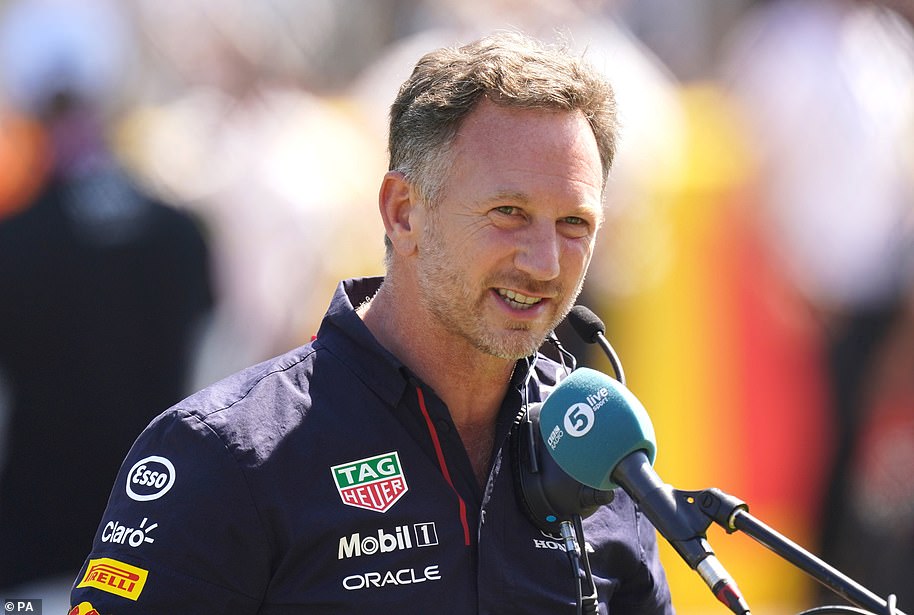 ‘You don’t put a wheel up the inside without there being huge consequences. We are just lucky today that there wasn’t someone seriously hurt.

‘What I am most angry about is just the lack of judgement, and the desperation in this move. It was never on.

‘Lewis is a world champion that has won seven titles. It is an amateur’s mistake and a desperate mistake. Max is battered and bruised. It is the biggest accident of his career.’

But Hamilton said: ‘I don’t really have anything to say to Christian. The win doesn’t feel hollow.

‘I don’t think I am in a position to have to apologise for anything. We are out there racing.

‘I don’t agree with the stewards but I take my penalty on the chin and get on with my job. I am not going to whine about it.

‘Everyone is going to have a different opinion and I don’t really care what people think so I just do what I do and I am really grateful for today.’