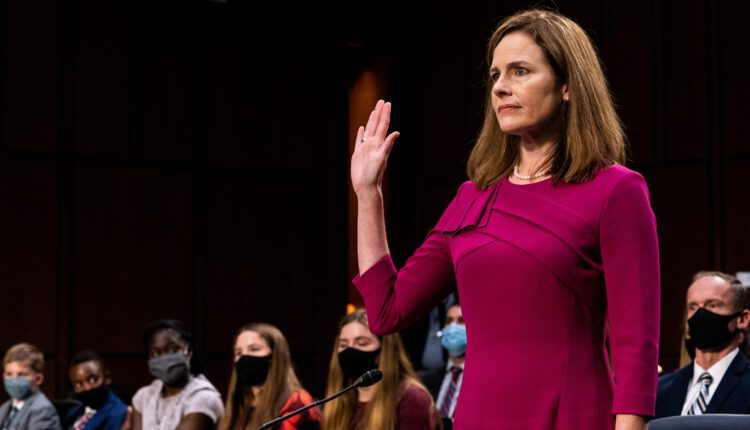 In her introductory statement, Judge Barrett spoke at length about her family life as a mother of seven and her years of work as a law professor at Notre Dame.

Her story touched on many of the points Republicans sought to emphasize throughout the day on Monday, including her popularity among students, her publications in prestigious law journals and her ability to balance her work with her family.

In questioning Judge Barrett over the coming days, Republicans are likely to continue building a profile of the nominee as an accomplished legal scholar inappropriately scrutinized by Democrats for her personal values.

In doing so, they are likely to invite Judge Barrett to speak about her role as a mentor and a teacher, and as a mother to a large family that includes two adopted children. The approach will allow Senate Republicans, whose majority is at risk, to appeal to women and independent voters whose backing their candidates need to win re-election.

While Republicans may look to flesh out her biography by asking about Judge Barrett’s judicial experience as a circuit court judge since 2017, they appear more likely to focus on her much longer professional history as an academic, rather than her judicial philosophy or interpretation of the law.

Democrats are expected to focus more on the implications of confirming Judge Barrett than on criticizing her directly.

In opening statements on Monday, Democrats denounced the hearing as an attempt by Republicans to rush through a nominee who would shift the ideological balance of the Supreme Court to the right, jeopardizing the health care law. Many came equipped with photographs and back stories of constituents who have depended on the law during the pandemic, questioning what future they would face if a conservative majority overturned the statute when it goes before the court the week after Election Day.

Democrats want to avoid attacking Judge Barrett’s character, which happened during the confirmation hearings for Justice Brett M. Kavanaugh in 2018. They are also steering clear of talking about the nominee’s Catholic faith, which some Democrats made an issue during her confirmation hearing for an appeals court seat in 2017.

Republicans spent the first day of the proceeding charging that Democrats’ opposition to Judge Barrett reflected anti-religious bias, although no Democrat mentioned or alluded to her faith.

With Democrats all but conceding that Judge Barrett’s confirmation is inevitable, much of the questioning is likely to be colored by the broader political climate in which the confirmation process is taking place.

Democrats plan to use their time to ask Judge Barrett about her views on access to health care, a theme that helped them win the House majority in the 2018 midterm elections, and abortion rights, in an effort to emphasize the stakes of her confirmation for independent voters and women.

While Democrats may press Judge Barrett to speak about her conservative opinions, which they have said could threaten precedents covering abortion rights and other protections, their questions are likely to be fruitless, as most past nominees have declined to answer questions about how they may vote in the future.

They are also expected to continue to argue that the hearing is diverting attention and resources from the current public health crisis, as lawmakers have failed to pass new legislation that could provide economic relief.

‘He’s a yoghurt head!’ Liverpudlian girl, 3, gives her verdict on Boris and his lockdown measures