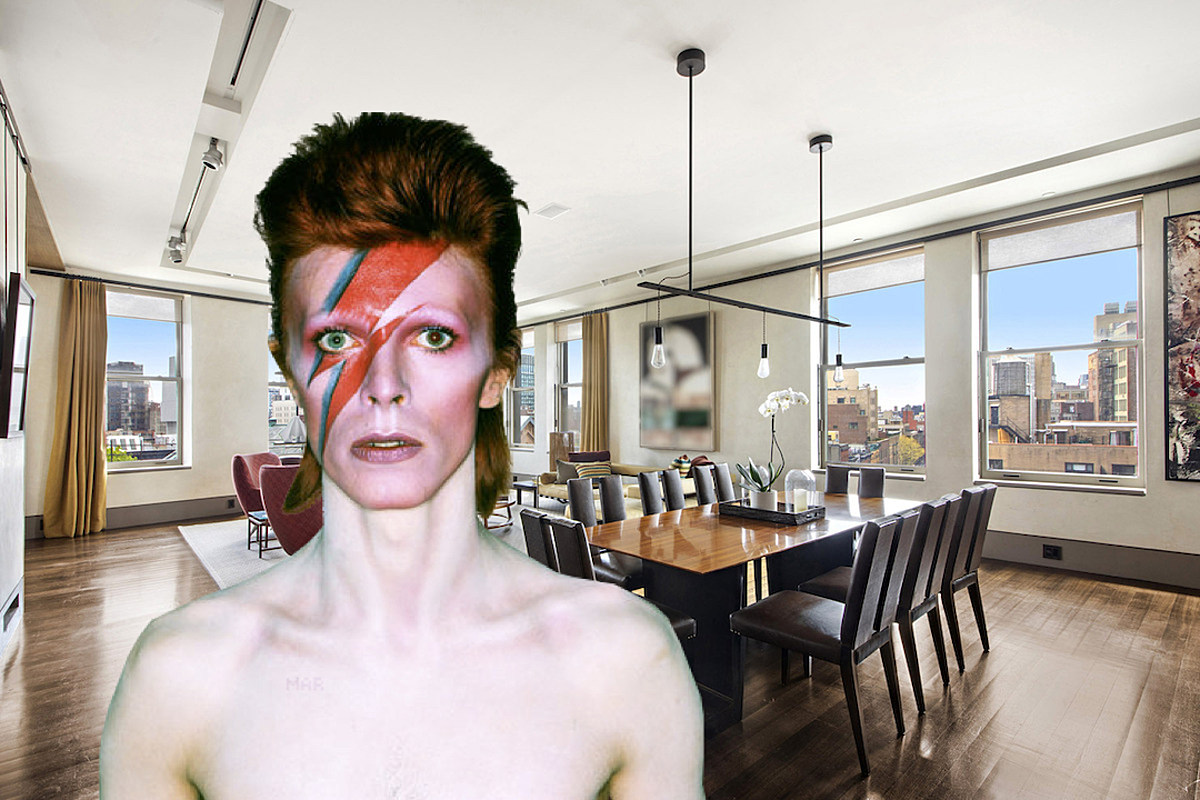 There’s little doubt that David Bowie experienced many benefits of fame during his lifetime, including living in a lavish New York City apartment recently reported to be selling for a whopping $16.8 million. Now, Bowie fans can take a look inside those luxurious digs.

According to The Independent, the singer bought the apartment in Manhattan’s SoHo/Nolita neighborhood for $3.81 million in 1999. This year, after spending less than a month on the market — the Corcoran Real Estate Group first listed the home on June 14 — it has now been delisted, as shown on the website streeteasy.com. That would suggest a buyer has agreed to pay an amount close to its hefty price tag.

See photos of the apartment near the bottom of this post.

Bowie and his wife, Iman, moved to the downtown apartment full-time in 2002 after leaving their midtown NYC apartment overlooking Central Park, The Independent reported. The apartment has since been the site of numerous Bowie memorials following his 2016 death.

In the 2017 book Forever Stardust: David Bowie Across the Universe, author Will Brooker wrote that Bowie “loved living in SoHo/Nolita.” In fact, the singer evidently “felt at home [being] semi-anonymous among New Yorkers too cool to act starstruck at celebrity sightings.”

The apartment is 5,090 square feet with 3 bedrooms, 3 baths and a powder room. Other amenities of the home include multiple terraces, 11-foot ceilings and a fireplace. It’s located at 285 Lafayette Street in unit 7DE, sitting within a 9-story building housing 30 total apartments.

Located in a premier full service building in Soho/Nolita, is a grand yet intimate condominium residence measuring 5,090 square feet (473 SqMt) with 3 perfectly situated terraces measuring an additional 1,025 square feet. The interior was beautifully crafted by one of Europe’s most renowned architect/designers. Direct elevator access to the apartment’s entrance gallery leads to a 56 × 22 foot great room with 3 exposures and a western terrace. 11 foot ceiling heights, a fireplace, adjacent library (w/bath), and open kitchen add to the space’s character and function. The main bedroom suite measures over 1,000 square feet and features a fireplace, dressing room, oversized bath and terrace. There are an additional 3 bedrooms, 3 baths, and a powder room.

Originally built in 1886 and served as the Hawley & Hoops chocolate factory, 285 Lafayette Street was converted to a full-service condominium building in 1999.