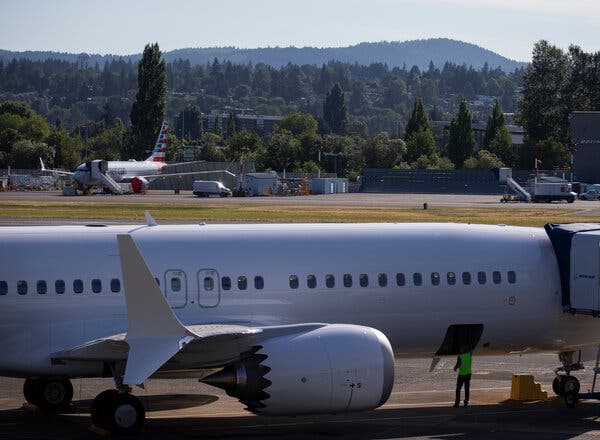 The European Union said Monday that it would begin imposing billions of dollars in tariffs on a wide range of popular American food, drinks and other products beginning Tuesday, an action that was cleared by the World Trade Organization after it said Europe could retaliate against the United States for years of illegal subsidies given to the airplane maker Boeing.

The decision, which stems from a 16-year-old dispute before the global trade body, comes after the Trump administration last year imposed tariffs on European products as retaliation for what the W.T.O. ruled were illegal subsidies given to the European airplane maker Airbus, Boeing’s main rival.

European officials, however, are hoping for a settlement between the two countries that would put an end to the tit-for-tat tariffs once and for all, perhaps even before President Trump leaves office on Jan. 20 to make way for President-elect Joseph R. Biden Jr., according to a European Union official with knowledge of the cases who spoke on condition of anonymity in order to discuss private negotiations.

Details of the tariffs, including the value of the items to receive the tariffs, will be released later Monday. The European Commission previously issued a preliminary list of American imported products that it could choose to tax, including aircraft, chemicals, citrus fruit, frozen fish and ketchup.

Both Boeing and Airbus have taken steps to remove subsidies and fiscal support that had been deemed illegal by the W.T.O., opening the door to both sides entering into a negotiated settlement quickly, said the diplomat, who was not authorized to speak publicly about the matter.

At a media briefing in Brussels following a meeting of trade ministers, Valdis Dombrovskis, executive vice president of the European Commission, called on the United States to come to the table and urged both sides to “drop existing countermeasures with immediate effect so we can quickly put this issue behind us.”

Removing the tariffs “would represent a strong win-win for both sides,” he said. “We now have an opportunity to reboot our trans-Atlantic cooperation,” he said.

Peter Altmaier, Germany’s federal minister for economic affairs, added that Europe was “ready at any time to talk to the existing or new U.S. administration and withdraw” the tariffs. “We need to do something to avoid further escalation,” he added.

Any discussions, should they take place, may not be easy. Both sides have said they want to avoid inflaming a trade war, but a stumbling point is a standing demand by the Trump administration that Europe repay previous subsidies received by Airbus, the European official said. The W.T.O. rulings only require that companies halt current illegal financial support — not repay previous subsidies.

And it was not immediately clear whether the Trump administration would be interested in negotiating a settlement before Mr. Biden inaugurates a new administration, let alone remove the U.S. tariffs to pave the way for talks.

For now, American producers of a wide variety of foods, drinks and other goods will face steep levies on their imports to Europe as part of the retaliation for the illegal subsidies that Boeing has previously received.

Both sides have argued that the support amounted to illegal financial aid that allowed each plane maker to sell its products at unfairly low prices around the world, stifling competition and sales.

For Wall Street, the 2020 election was fraught with risk and uncertainty.

Early on, candidates who promised to rein in the excesses of corporate America and tax the superrich, as part of their pledges to close the country’s wealth gap, were in contention to be the Democratic nominee for president.

More recently, the concern shifted to the potential for civil unrest, or an election with no clear outcome, both factors that would result in the kind of uncertain environment that investors and chief executives both loathe.

In the end, though, big companies and wealthy investors seem to have landed in a sweet spot: a more predictable White House under Joseph R. Biden Jr., now the president-elect, paired with a Republican-led Senate that can ward off higher taxes or other policy changes investors find unappealing. (At least for now, that is. Control of the Senate is a matter that won’t be settled until January after Georgia holds two runoff elections.)

“Financial markets don’t want risk or sudden changes,” said Charles Phillips, a longtime software executive who is raising a technology-investment fund and a supporter of Mr. Biden. “So the fact that he’s levelheaded and collaborative, and the fact that most likely we may have a Republican Senate — if that happens, it’ll limit what he can do,” he said.

Markets bolted upward last week as the national vote count appeared to point to that result. Over the weekend, after the race was called for Mr. Biden, some analysts said to expect more gains over the peaceful completion of the voting process, and to watch for an uptick in shares of companies Mr. Biden’s policy agenda is likely to benefit — including green-energy companies, producers of virus-testing materials and laboratories, and those in the infrastructure space.

Mr. Biden did win substantial financial backing from finance-industry donors, (about $74 million, according to figures compiled by the Center for Responsive Politics, which overshadowed Mr. Trump’s support from those donors by a factor of four to one), and some expressed their excitement for their candidate.

Other reactions from across Wall Street after the election was called were more measured.

Ken Griffin, the billionaire founder of Citadel, said he was “relieved there is no social unrest,” David Solomon, the C.E.O of Goldman Sachs, and George Wallace, who runs Neuberger Berman, both pointed to the challenges Mr. Biden faces with the country in a pandemic and an economic crisis. Bill Ackman, who runs the hedge fund Pershing Square Capital Management, meanwhile, called on President Trump to “concede graciously and call for unity from all who have supported you.”

A new partial lockdown to contain the spread of the coronavirus in France is having a smaller impact on the national economy than a total lockdown earlier this year, the French central bank said Monday. But business leaders still expect a sharp decline in activity across the board in November, as order books at construction companies shrink, the bank added.

France’s second lockdown, which began Oct. 17 and is now expected to stretch beyond Dec. 1, was aimed at minimizing damage to the economy just as a recovery was starting to take hold during a summer rebound. Unlike the earlier lockdown, France is allowing public services and schools to stay open, and activity at construction and factory sites to continue.

The Banque de France said it expected the economy was likely to show a shrinkage of about 12 percent in November from a year ago. That compares with a wrenching 31 percent year-over-year contraction in April, when economic activity ground to a halt.

Whether that improvement lasts remains to be seen. Fears of coronavirus outbreaks have worsened the outlook for French business activity, and are likely to lead to a wave of layoffs, economists say.

French companies have said they expect earnings to decline in 2121, and they don’t expect to substantially increase spending on capital investment.

Working from home, and the use of socially distanced workplaces has so far helped maintain corporate activity. The opening of schools is easing child care burdens for employees with children.

Activity in agro-foods, pharmaceuticals and other industrial sectors enjoyed a bounce after an earlier national quarantine, and are now back to pre-pandemic levels, the central bank added.

At the same time, a quarter of the economy remains hard hit by social-distancing measures, including hotels, restaurants, tourism and catering, the central bank said.

Over the past year, SoftBank, the Japanese conglomerate headed by maverick billionaire Masayoshi Son, has come back from the brink of disaster.

SoftBank said on Monday that the trend had continued through the end of the summer, extending a recovery that followed one of the worst losses in Japan’s corporate history.

The company on Monday reported 562 billion yen, or $5.4 billion, in profit for the three months that ended in September. The jump from a big loss a year ago was largely driven by broad growth in global tech stocks as the coronavirus pushes consumers to spend more of their lives online.

Last year, a disastrous investment in the office space company WeWork cast doubt on Mr. Son’s investment strategy. Earlier this year, the coronavirus pandemic cratered Softbank’s high-profile bets on companies like Uber and Oyo, which were hit hard by lockdowns across the world.

But a broad market recovery has pushed up the value of some stocks held by Softbank’s Vision Fund, the world’s largest tech investment vehicle. The company said the fund’s original investment of $75 billion in 83 companies had grown to $76.4 billion by the end of September.

Around half of the fund’s growth, however, came from increased valuations in its unlisted companies. SoftBank has frequently come under criticism by analysts for a lack of transparency in how it values its investments in the these privately held companies.

The market volatility was not all good news for SoftBank. The company also recorded $1.27 billion in losses from risky bets on derivatives. The moves, which were widely reported in September, have raised additional concerns about Mr. Son’s investment acumen.

In an earnings conference Monday evening, Mr. Son brushed off criticism about his management, dismissing the losses as short-term setbacks that distracted from his long-term vision for the company’s success.

Here are the highlights of Peter and Niraj’s takeaway from the earnings season.

The strong are getting stronger.

As the pandemic forced people to stay home and do more things online, some successful companies were perfectly positioned to take advantage of the change.

Consider Amazon. Its profits in the first nine months were up $5.8 billion compared with a year earlier. They allowed the company to spend 120 percent more during the period on things like warehouses, technology and other capital investments. That spending — $25.3 billion — could make it harder for all but Amazon’s biggest competitors to keep up with its growth.

Some companies are doing better than expected.

When the pandemic hit, many executives understandably feared that their companies were facing an existential crisis. But a surprising number of those have excelled in part because many Americans who did not lose jobs but were also not spending on travel and entertainment found themselves with more disposable income.

For some large restaurant chains, drive-through customers, as well as delivery and takeout orders helped them grow. On Thursday, Papa John’s, whose stock is up 32 percent this year, reported surging sales, profits and cash flow and announced a new stock buyback program.

Businesses have adapted, successfully in some cases.

Hertz sought bankruptcy protection in May. And its biggest competitor, the Avis Budget Group, ran up large losses — $639 million in the first six months of the year. But Avis turned a modest $45 million profit in the third quarter.

The company’s comeback was made possible by cost-cutting and a decision to sell 75,000 vehicles in the United States to take advantage of strong demand for used cars. (Nationally, spending on used light trucks, including sport utility vehicles, was up nearly 19 percent in the third quarter from a year earlier.)

The outlook is dire for others.

Passenger airlines are among the biggest losers of the pandemic, and they have few options to improve their prospects. Delta, United Airlines and American Airlines worked quickly to cut costs and got $50 billion in the March federal stimulus package.

In the third quarter, American lost $2.4 billion and United lost $1.8 billion. For all three, revenue fell more than 70 percent from the same three months last year.