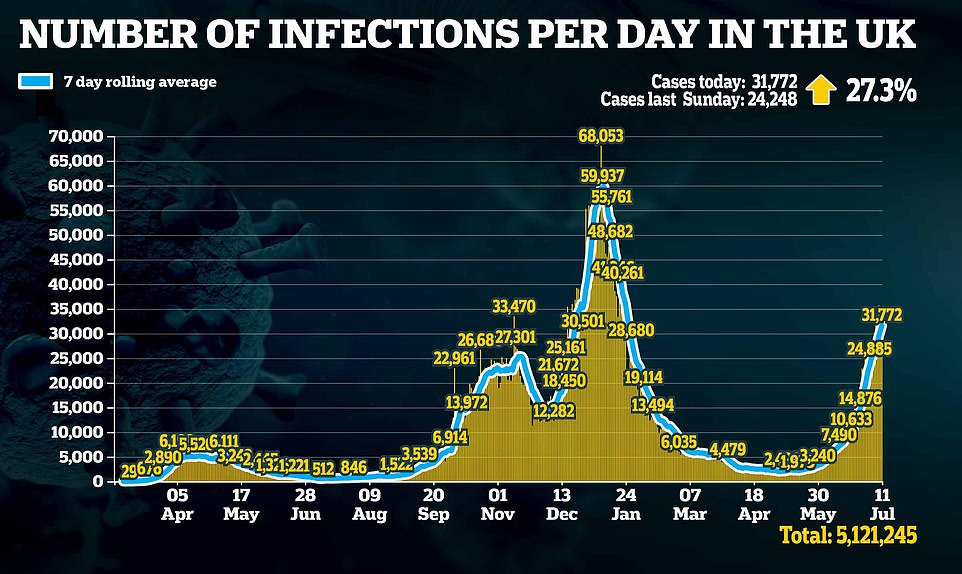 No10 has been told to prepare for up to 2million Covid cases over the next few weeks following the final unlocking on July 19, it was claimed today.

Ministers are preparing to relax all remaining legal restrictions next Monday, with Boris Johnson set to formally unveil the move in a 5pm press conference tonight.

But the public will still be urged to work from home and wear masks in crowded places and on public transport.

A rapid rise in cases has forced Downing Street to shift its tone from once saying the path to normality was irreversible to the PM yesterday admitting ‘the plan to restore our freedoms must come with a warning’.

Despite promising hints in the data that Britain’s outbreak may already be slowing, infections are still rising. The UK is now recording 31,500 cases every day on average – up from 24,800 the week before.

Senior ministers including Health Secretary Sajid Javid have already laid the ground for up to 100,000 Britons to get infected a day within a matter of weeks, prompting fury from experts who fear pressing ahead with July 19 is a reckless gamble.

PHE experts said it was possible admissions could hit 3,000 a day — similar to levels seen in January.

The Guardian today reported that Whitehall officials have been told to prepare for between 1 and 2million coronavirus cases over the next few weeks, with the third wave still growing in size.

But No10 has repeatedly defended its decision to crack on with Freedom Day, with the goal now being centred around learning to live with the virus instead of taking cover when infections surge.

Ministers have reportedly been privy to mathematical modelling from the advisory panel that suggests cases will peak in August and Sage also says infections will start to tail off naturally within weeks because of a mix of vaccines, natural immunity and seasonality.

Health chiefs have dubbed England’s post-Freedom Day strategy ‘hybrid immunity’, a play on the controversial herd immunity tactic that was touted at the beginning of the pandemic.

It would see the older and vulnerable population — most of whom will be fully vaccinated by the time July 19 comes around — enjoy protection through the jab programme while the young get immunity from natural infection. 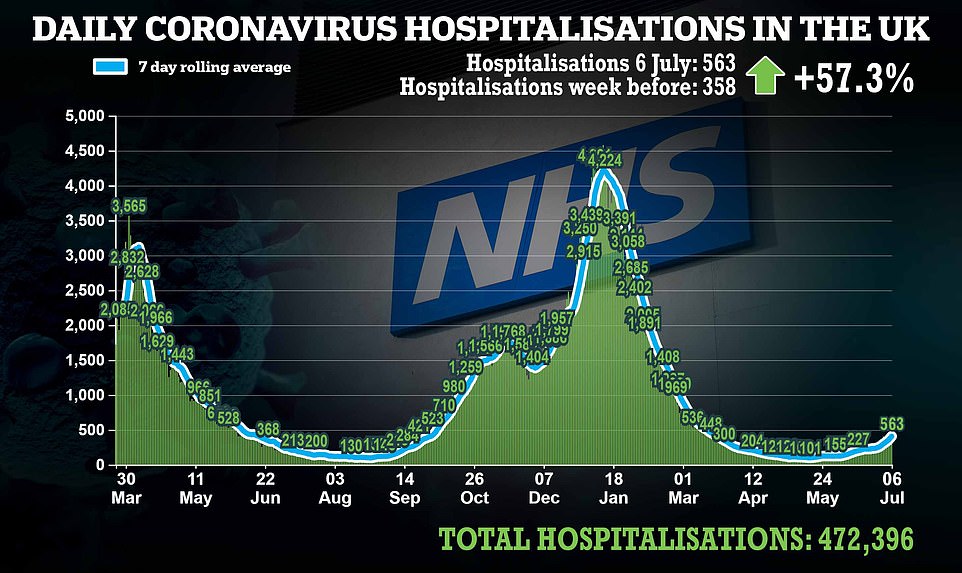 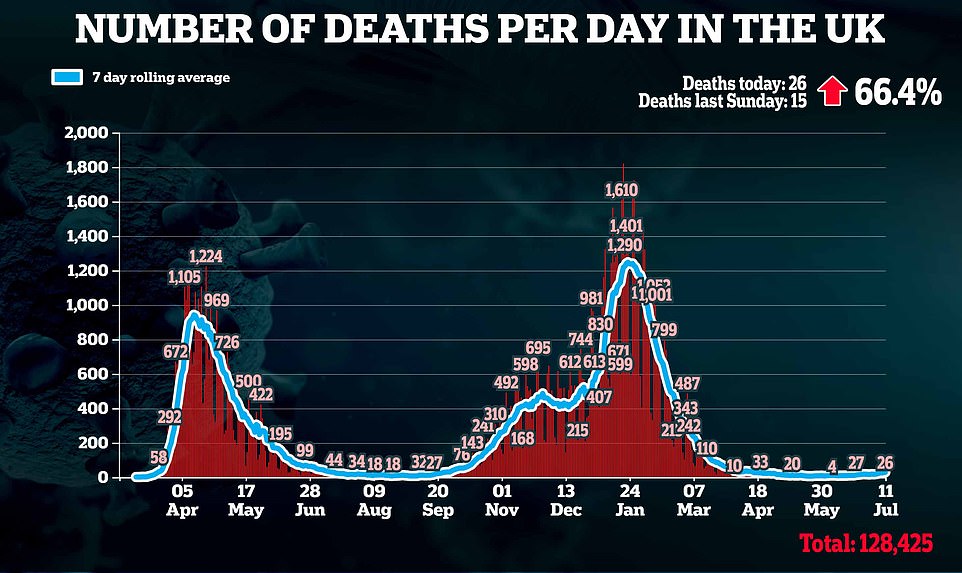 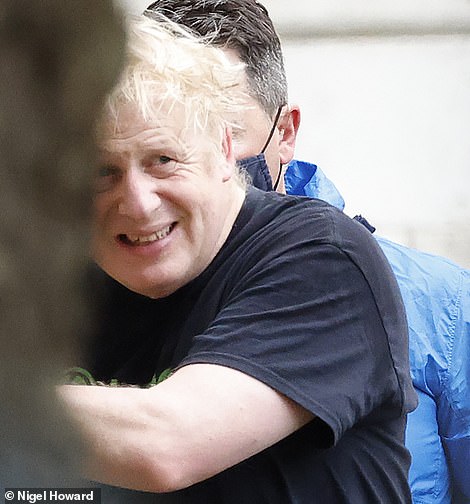 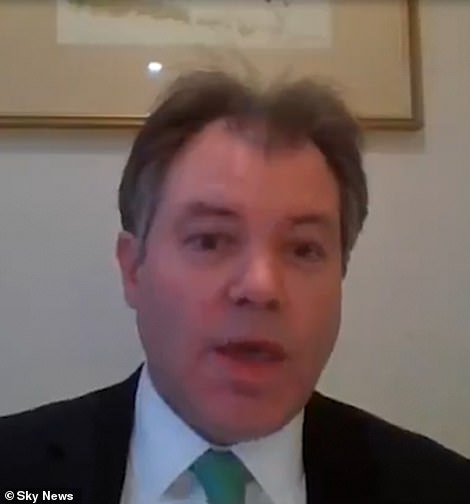 Boris Johnson is set to unveil plans for lifting remaining Covid restrictions across England today. But Britons are set to still be asked to work from home where possible and wear a face masks in crowded places and on transport. Health minister Edward Argar said guidance on ‘things like mask-wearing’ was set to continue after July 19.

Boris Johnson will give the final go-ahead for ‘Freedom Day’ on July 19 today – but send a stark message that people need to keep being careful amid spiking cases.

The Prime Minister will use a Downing Street press conference to confirm the unlocking next Monday, with almost all legal restrictions to be axed in England.

But he will caution that the dramatic easing ‘comes with a warning’, and people must ‘expect’ to keep wearing masks in enclosed spaces such as supermarkets and trains.

Government experts have suggested working from home and social distancing should remain the norm after the shift to trusting the public’s ‘common sense’. There are fears that hospitalisations could hit 3,000 a day soon as the Delta variant continues to run riot.

But health minister Edward Argar pointed to the ‘defensive wall’ being provided by vaccines. ‘If not now, when?’ he said of lifting the legal restrictions.

In a statement ahead of a Covid O meeting this morning to sign off the plans, and his press briefing at 5pm, the PM said that cases will inevitably continue to rise as restrictions are eased.

‘Caution is absolutely vital, and we must all take responsibility so we don’t undo our progress, ensuring we continue to protect our NHS,’ he said.

Department of Health statistics show Britain recorded around 2million cases within just eight weeks during the second wave, breaching the 4million barrier in mid-February after weathering the worst of the storm in January.

Daily infections peaked at around 70,000 cases but the true toll was undoubtedly much higher because of the swathes of people who catch the virus but never display any symptoms, meaning they don’t get swabbed.

MailOnline analysis of Government statistics show the UK has already spotted 600,000 cases since the third wave first began to spiral in mid-June, following the emergence of the highly-transmissible Indian Delta variant.

Hospital admissions and deaths are both now rising, with 2,700 Covid patients now on wards compared to 1,500 two weeks ago and 26 fatalities from the virus recorded yesterday up 73 per cent in a week.

But top experts insist vaccines have severely damaged a once-impenetrable link, with the proportion of patients who fall seriously ill being just a fraction of what it was at peak of pandemic.

Just one in 1,000 patients are now expected to die after getting Covid, compared to one in 100 before the discovery of drugs to treat the seriously ill and vaccines.

The updated infection-fatality ratio, estimated by Cambridge University researchers, would be the equivalent of 1,000 deaths for every 1million cases in total — but not all of them will be spotted.

Up to a third of cases are asymptomatic and may never show up in daily testing. Vaccines have also made symptoms of the illness milder, resembling that of a common cold.

Mr Argar today said it was ‘possible’ that daily Covid case numbers could hit the 100,000 mark but stressed that vaccines are helping to protect people from serious illness and hospital admission.

Speaking to BBC Radio 4’s Today programme, he said: ‘You’ve seen the Secretary of State and others talk about between a range of 50,000 to 100,000 is possible.

‘If you look at hospital admissions, and forgive me if my figures are a little bit out, the seven-day rolling average of for now, when we’re seeing this level of infection rate, is roughly between 350 and 400 a day. Back in January, with an equivalent infection rate, we were seeing 1,800 to 2,000.

Mr Argar added: ‘So you can see how that vaccine programme may not have broken it by 100 per cent because the vaccine isn’t 100 per cent effective.

‘But it has really severely weakened that link and therefore the numbers we are going to see in hospital are going to be much smaller.’

Dr Susan Hopkins, from Public Health England, has warned it was ‘possible’ that 100,000 daily cases could lead to 3,000 hospital admissions a day soon afterwards.

‘But really it will depend on the behaviour that we as individuals and the population overall, do,’ she said, adding that January’s peak of 4,000 admissions a day was ‘three doubling times away from where we are now, and that it was six to eight weeks potentially, unless things change, and unless we keep the transmission rate down’. 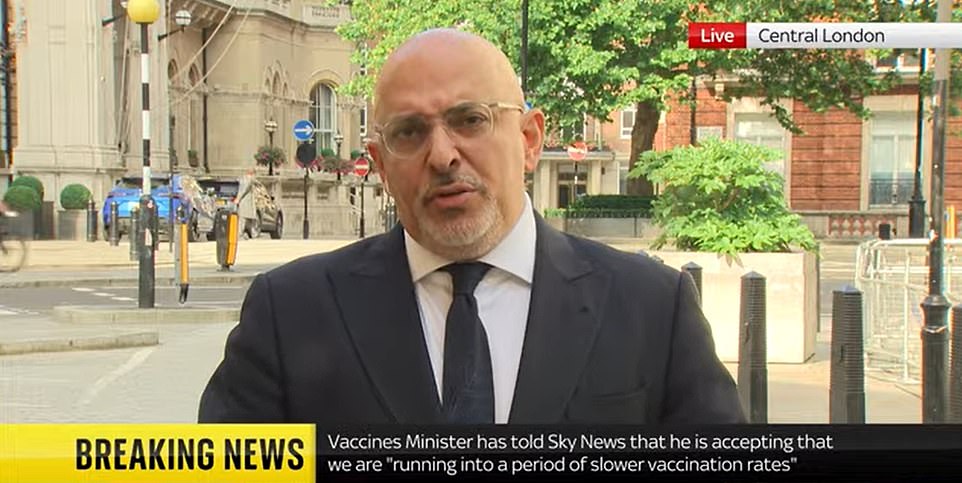 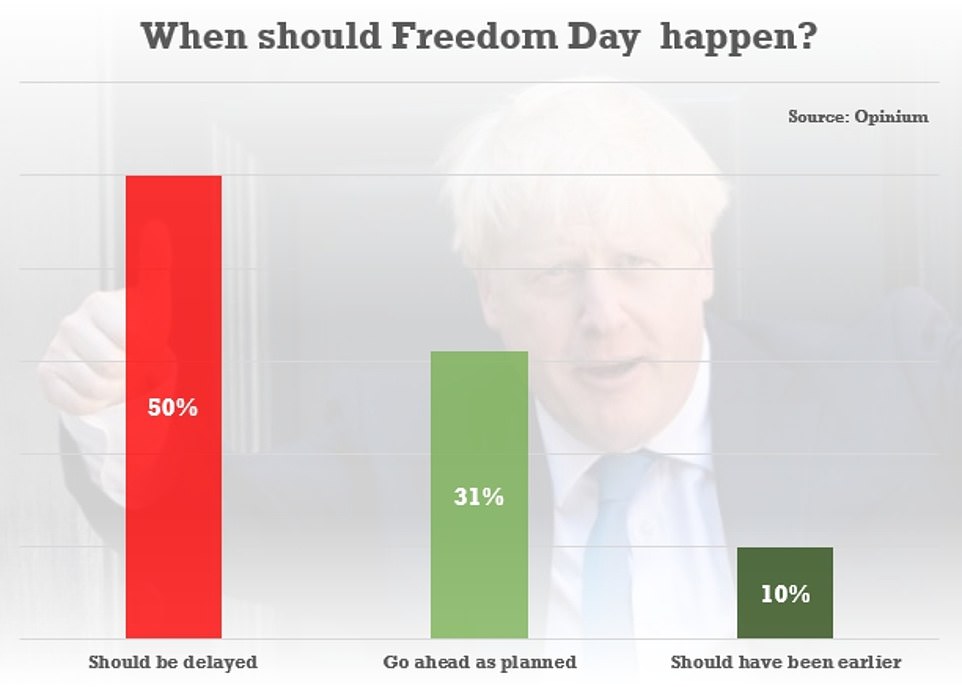 Daily testing could replace self-isolation for people who come into contact with positive Covid cases, a minister said today as the government scrambles to overhaul the NHS app.

Nadhim Zahawi confirmed that the contact tracing app is being reworked amid fears that millions of healthy individuals could be doomed to house arrest as infections rise.

But he made clear the government is also seriously considering doing away with self-isolation for those who are willing to take daily lateral flow tests.

Statistics expert Professor Sir David Spiegelhalter has called for the rules to be brought ‘in proportion’, warning that life could be ‘massively disrupted’ by the current quarantine requirements.

The latest data show the app issued more than 350,000 alerts during the last week of June, up 60 per cent on the previous week. People are told to self-isolate even if they test negative for the coronavirus and have already had both vaccines.

The problem is expected to get worse, with Health Secretary Sajid Javid warning there could be more than 100,000 new infections every day next month.

There had been hopes that the double-jabbed would be exempted from the rule on so-called ‘Freedom Day’, but that will now not happen until August 16.

People pinged by the app are not legally obliged to isolate. Ministers have been forced to appeal for Britons not simply to delete the software, amid anecdotal evidence that is happening.

Government sources said the app’s ‘sensitivity’ will be reduced to cut the numbers being asked to isolate unnecessarily.

Critics of pushing ahead with Freedom Day say the NHS is in a precarious position, while it tries to focus on tackling the covid-fuelled backlog of patients.

Currently 5.3million patients are on waiting list in England — the most since records began in 2007 and Mr Javid has warned the true figure could reach 13million over the coming months.

Tory MPs have also accused No10 of ‘torturing the nation’ by watering down certain elements of July 19’s unlocking.

Originally Boris said it would be irreversible, but the Prime Minister quickly dropped all mention of the word amid rising cases and warnings from top scientists that they just don’t know what will happen in the next few months.

And now the stance appears to have shifted on masks, with Zahawi saying yesterday that Britons would be expected to wear them even though they won’t be legally required.

The claim — unveiled in a tranche of documents — came amid fears infections will continue to rise over the coming weeks, with England’s progress to the final of Euro 2020 blamed on a ferocious surge in cases.

SAGE advisers — who will today release another trove of modelling documents — admitted it was ‘very difficult’ to predict when cases will begin falling in the country.

Outbreaks will plateau at different times in different regions, they wrote in one of the scientific papers submitted on June 23.

The full report read: ‘At some point in the future, the number of cases in England will plateau and then start to fall as a result of vaccination, natural immunity, seasonality, and behaviour change.

‘It’s very difficult to determine in advance the precise date at which this will occur.

‘It’s likely it will happen at different times in different parts of the country, depending on local levels of immunity and behaviours.’

It comes amid reports daily testing could replace self-isolation for people who come into contact with positive Covid cases.

Nadhim Zahawi confirmed that the contact tracing app is being reworked amid fears that millions of healthy individuals could be doomed to house arrest as infections rise.

But he made clear the government is also seriously considering doing away with self-isolation for those who are willing to take daily lateral flow tests.

Statistics expert Professor Sir David Spiegelhalter has called for the rules to be brought ‘in proportion’, warning that life could be ‘massively disrupted’ by the current quarantine requirements.

The latest data show the app issued more than 350,000 alerts during the last week of June, up 60 per cent on the previous week. People are told to self-isolate even if they test negative for the coronavirus and have already had both vaccines.