Ministers are on track to lift restrictions on July 19 as health officials say the data is ‘very, very positive’, the Daily Mail understands.

Although hopes of Freedom Day being brought forward to July 5 are set to be dashed on Monday, there is growing optimism about the figures and the fact there has been no measurable rise in hospital admissions, despite a sustained increase in infections.

It comes as six cases of a variant first discovered in Peru – the Lambda variant – have been identified in the UK, although health officials are not worried at this stage due to the low number of cases here and around the world.

Figures from Public Health England show that 111,157 cases of the Delta variant have now been identified in the UK, up by 46 per cent on the previous week.

This means that approximately 95 per cent of confirmed cases of coronavirus across the UK are the Delta variant, which is more transmissible and may carry a higher risk of hospitalisation than the previously dominant Kent strain.

But PHE also said the vaccines were continuing to have a ‘crucial effect on hospitalisation and death’, with one source saying the data was ‘very, very positive’.

Their latest data shows that one dose of the jab reduces the risk of hospitalisation with the Delta variant by 80 per cent and two doses by 96 per cent.

Dr Jenny Harries, chief executive of the UK Health Security Agency, said: ‘Through the success of our vaccination programme, data suggest we have begun to break the link between cases and hospitalisations.

‘This is hugely encouraging news, but we cannot become complacent. Two doses of vaccine are far more effective against Covid-19 than a single dose, so please make sure that you come forward to get your second dose as soon as you are invited.’

The Lambda variant has been classified a ‘variant under investigation’ because it has certain mutations which can potentially increase its transmissibility and resistance to vaccines. All cases identified in the UK are linked to overseas travel.

The variant is most prevalent in South America and makes up 82 per cent of the cases in Peru, after first being identified in August.

It has also spread to Chile, where it comprises almost a third of cases, and clusters have been found in Argentina, Brazil, Colombia, Ecuador and Mexico. 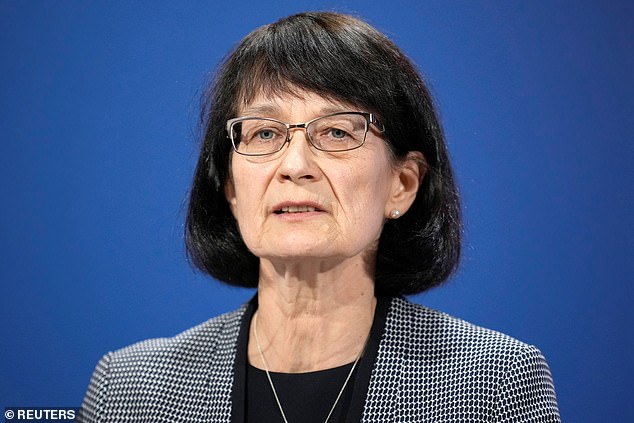 Dr Jenny Harries, chief executive of the UK Health Security Agency, said: ‘Through the success of our vaccination programme, data suggest we have begun to break the link between cases and hospitalisations’

PHE warned it had spotted another new Covid variant that emerged in Peru and has infected at least six Britons.

The ‘Lambda’ strain, as it’s been named by the World Health Organization, has been designated a ‘Variant Under Investigation’ while PHE work out how infectious, deadly or vaccine-resistant it is.

The six cases of Lambda have been linked to overseas travel. They were detected between 23 February and 7 June.

It has two concerning mutations on its spike protein – known as L452Q and F490S – which are feared play a role in making it more infectious and able to dodge some immunity.

The World Health Organisation classified Lambda as a Variant of Interest on 14 June but has not yet upgraded it to Variant of Concern status.

The earliest documented sample was reported in Peru and Lambda has been sequenced in 26 countries to date.

‘Where cases have been identified, additional follow-up of cases, testing of contacts and if required targeted case finding will be deployed to limit its spread.’

It comes as almost 2,500 people who entered Britain and tested positive for coronavirus could not be traced because they gave inaccurate contact details.

The passengers, who arrived between February 14 and May 10 and failed to correctly complete their details on passenger locator forms, include 52 people who tested positive for a variant of concern and three people who had travelled from red-list countries.

It is feared that the individuals, who have not been identified, may have gone on to spread the variants within their communities.

The Government says it is ‘a criminal offence to provide false or deliberately misleading information on passenger locator forms’. Those who do so face fines of up to £10,000 or ten years in prison – or both. It was not clear whether any of those who provided inaccurate addresses have been prosecuted.

Yvette Cooper, chairman of the home affairs committee, said: ‘This shows there are still real gaps in the Government’s Covid border measures. For thousands of cases to effectively be lost after they have arrived in the country is a real problem – and even more troubling when those include new variants the Government is worried about.’

A Government spokesman said it has a ‘robust’ border and testing regime in place to minimise the risk of new variants entering the UK. They added: ‘We have rigorous checks at the border and Border Force is working to ensure that it has the right staffing levels to check that passengers are compliant with border health measures.’

Separate data from the ONS’s weekly infection survey showed that one in 440 people in England were estimated to have the virus, up from one in 520 the week before and one in 560 the week before that. Meanwhile the R value – the rate at which the outbreak is growing – was unchanged from last week at between 1.2 and 1.4, according to the latest figures.

Professor Adam Finn, a member of the Joint Committee of Vaccination and Immunisation, said people who have had two vaccinations should continue to be cautious.

He told Sky News: ‘The safety of putting people together who have been vaccinated is greater than people who are unvaccinated, but if there’s a lot of virus circulating there will still be infections taking place.’

He also said there was ‘a high probability’ that some booster jabs would be needed in autumn. In order to avoid the risk of a winter surge, we may well need to use booster doses, particularly I think in the first instance for the people who had the vaccine (the) longest time ago and who are at highest risk of getting seriously ill when they get infected.

‘So I don’t think this is a certainty yet, but I think there’s a high probability that at least some boosting will need to go on this winter.’

Government figures yesterday showed 15,810 people had tested positive for the virus, with the average for the last seven days 48 per cent up on the previous week.

There were also 18 deaths and 224 patients were admitted to hospital. Both numbers are up on the week before.