By Katie Weston For Mailonline

This is the moment police catch an ‘illegal migrant’ stowed inside a roof box on a family’s car at the M20 service station after their return from France.

Footage shows an officer wearing a face mask and purple gloves opening the compartment to find a man curled up inside.

The video was captured by Elliot Lloyd Brake, 27, at Maidstone Services in Kent on Monday last week. 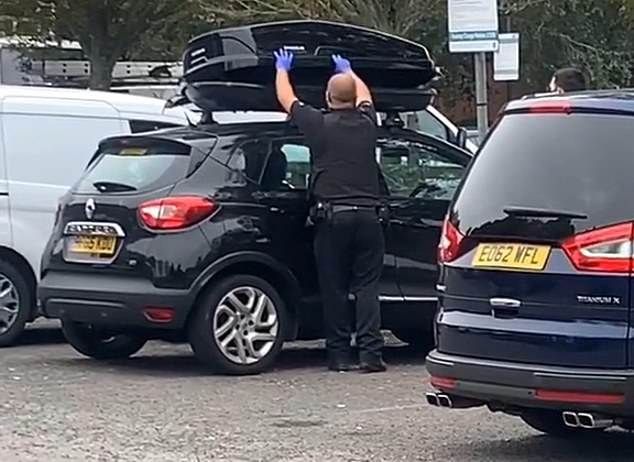 The police officer, pictured wearing purple gloves and a face mask, opening the roof box before finding a man curled up inside at Maidstone services near the M20 in Kent

In the clip, the camera operator can be heard saying: ‘There he is ladies and gentlemen.’

The man, wearing light blue jeans, trainers and a black jacket, is then seen climbing out of the tiny space.

He unloads his backpack while the officer nearby hands him a bottle of water.

The suspected migrant was detained and questioned by Home Office immigration officers, according to Kent Police.

Mr Lloyd Brake, from Essex, told The Sun Online: ‘I was at the services getting breakfast when the driver came out of the service station with the police, who approached the vehicle.’

He added: ‘He wasn’t trying to fight or escape, he came out calmly with the help of the officers. 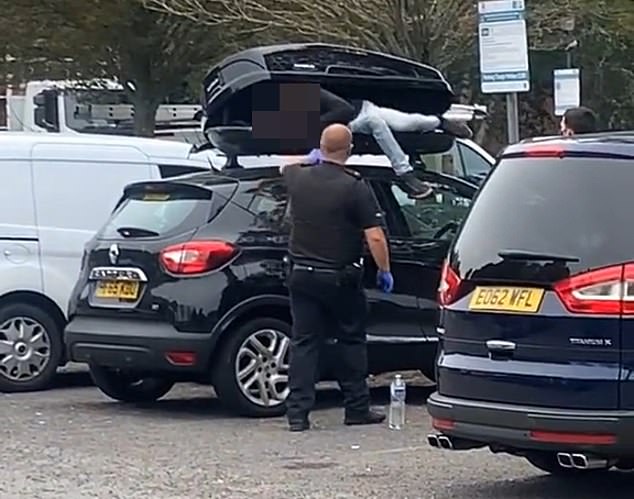 The man seen climbing out from the car’s roof compartment before the officer hands him a bottle of water. The person who filmed the footage said he ‘wasn’t trying to fight or escape’

Migrants are even using empty lemonade bottles to cross the Channel

A man was previously found with empty lemonade bottles strapped to his body in a highly-dangerous bid to swim to Britain as desperate migrants turn to increasingly risky methods to cross the Channel.

He was found last month just four miles off the French coast as the number of people making the perilous crossing has increased recently.

In another shocking case, a group tried to get to the other side of the channel in a children’s paddling pool while some have tried wooden boats or kayaks. Some used shovels as oars to row across.

Dozens of tenders and approximately 40 outboard motors have been stolen since the start of this year, according to the French police.

‘They put him in a squad car along with the driver.’

A spokesperson for the force told MailOnline: ‘Kent Police was called at around 10.05am on Monday 7 September 2020, following reports of a suspected migrant inside the roof box of a car at the M20 services near Maidstone.

‘Patrols attended the scene where the person was detained and enquiries commenced with Home Office immigration officers.’

It comes as the Home Office announces plans to fly at least 1,000 migrants who crossed the English Channel back to Italy, Germany and France in a series of weekly flights.

More than 6,000 refugees have crossed from France in crowded dinghies so far this year.

Officials have described the crossings as ‘thoroughly unacceptable,’ as Home Secretary Priti Patel plans to fly the arrivals back to Europe on a weekly basis, according to The Telegraph.

The Immigration Enforcement Secretariat said the Government and Ms Patel are ‘equally frustrated by the severity of the situation’.

The Government office warned it cannot take simple measures such as returning migrants after intercepting them at sea, due to legal constraints.

Talks are ongoing to get more UK funded officers on French beaches to prevent people trying to make the dangerous crossing.

The 1,000 migrants who would be flown back to Europe would be returning to countries where they have already had asylum claims granted.

Only 29 arriving migrants were sent back to France in 2019.

The Immigration Enforcement Secretariat official said: ‘There is considerable policy work underway to address where the UK’s immigration and asylum system is being exploited and abused.

‘As it currently stands, the system is inflexible and rigid, and is open to abuse by both migrants and activist lawyers to frustrate the returns of those who have no right to be here.’