More than 14 million Americans have already voted in the presidential election, with thousands of people lining up for hours to cast their ballots early in several key swing states this week.

The coronavirus pandemic has undoubtedly raised the stakes for the 2020 presidential race which will be the culmination of a year mired with race issues as well as voter fraud allegations.

The unprecedented circumstances have also sparked debates on the early voting process during a time when going to the polls is considered a risky act.

Early voting kicked off across multiple states this week, including Texas, Georgia,  Virginia and Tennessee, where thousands of people donned masks as they stood in line for hours at designated polling centers.

Nationally, 14.6 million people have already cast ballots by mail or through in-person voting, compared to roughly 1.4 million at the same point four years ago, according to the United States Elections Project. Two million of those votes were received in key swing states such as Florida.

AUGUSTA, GEORGIA: Voters waited in line to cast their ballot early at the Bell Auditorium after early voting kick off on Monday 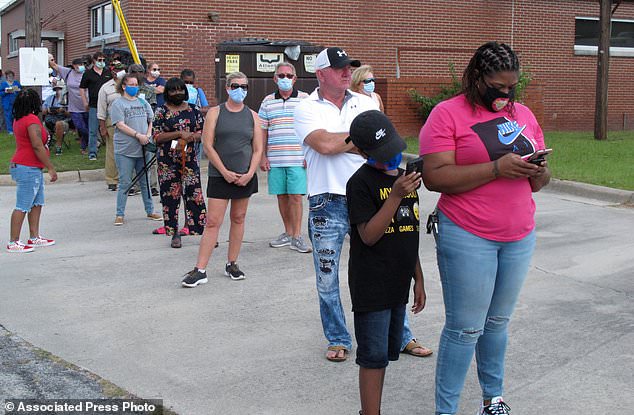 SAVANNAH, GEORGIA: Voters wearing masks wait in line to vote early outside the Chatham County Board of Elections office 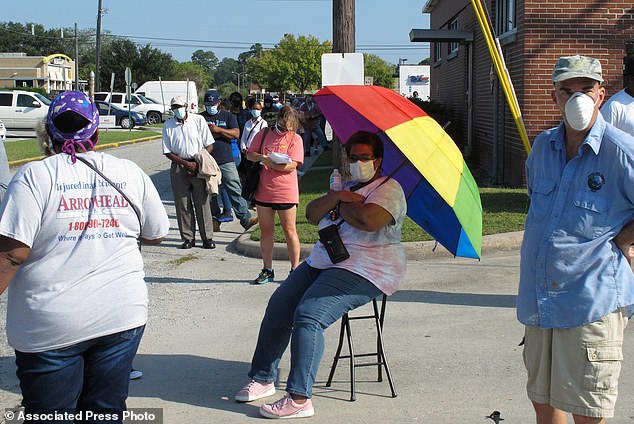 SAVANNAH, GEORGIA: Crystal Clark sits on a folding stool while holding an umbrella for shade as she waits in line to vote on Wednesday 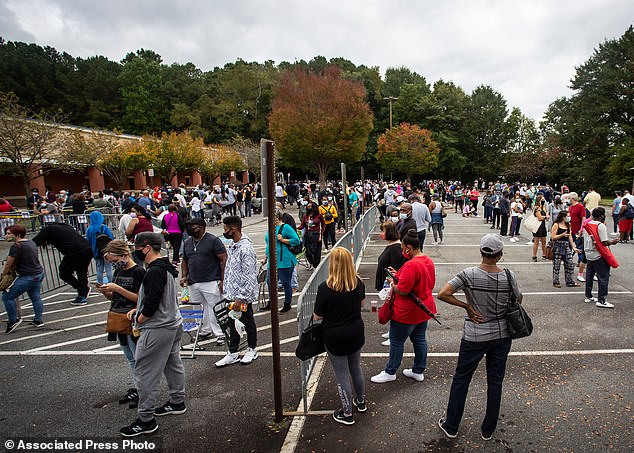 MARIETTA, GEORGIA: Hundreds line up for early voting at a polling center in Marietta. Black people are going to the polls by the thousands and waiting in lines for hours to vote early in Georgia

In Georgia, which is viewed as more of a contested state than in the past, voters set a record for the first day of early voting on Monday with 126,876 ballots cast, according to the state secretary.

The first day of voting however, did not go down without a hitch.

In Savannah, residents reported three-hour waits, while hundreds stood in line for up to four hours to vote in Atlanta.

In Gwinnett County, wait times at certain locations were as long as eight hours on Monday, according to Patch.

Polling centers across the state saw a particularly large turnout of black voters, many of whom saw giving up time to cast a ballot for the next president as worth the trade.

‘Many individuals went through a lot, suffered a lot for this opportunity,’ said Donovan Stewart, a 56-year-old military retiree, as he waited on line in Duluth.

‘So I could stand in line for four hours to do my civic duty. That’s what we’re called to do, to vote and try to make a change.’ 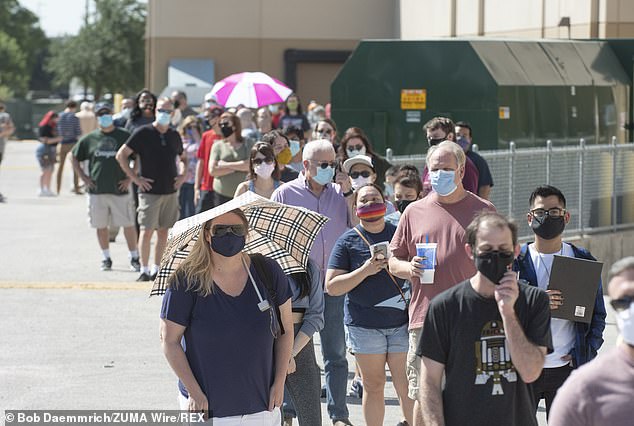 TEXAS: Similar scenes unfolded in Texas, where some voting locations had wait times of up to an hour 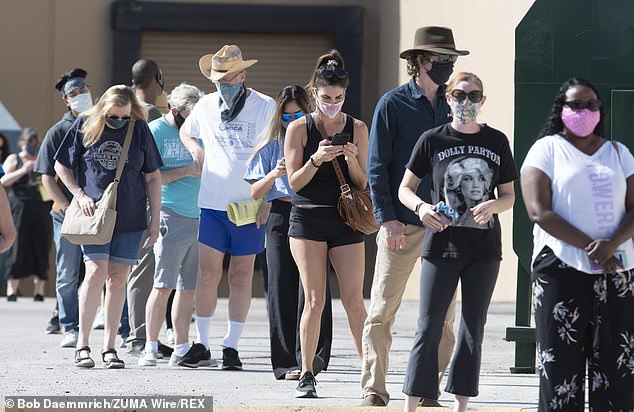 TEXAS: Long lines of voters queued up to cast their ballots on the first day of early voting in Austin 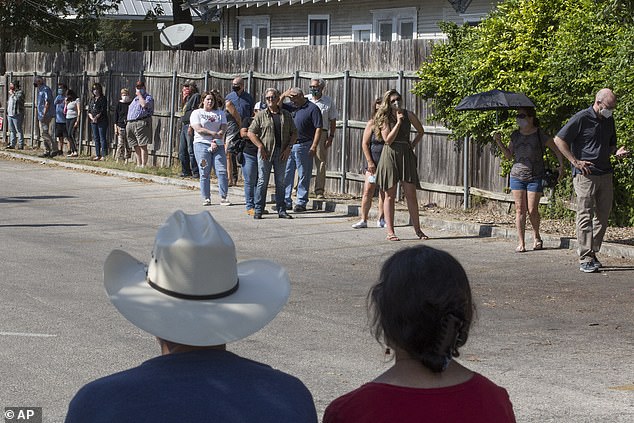 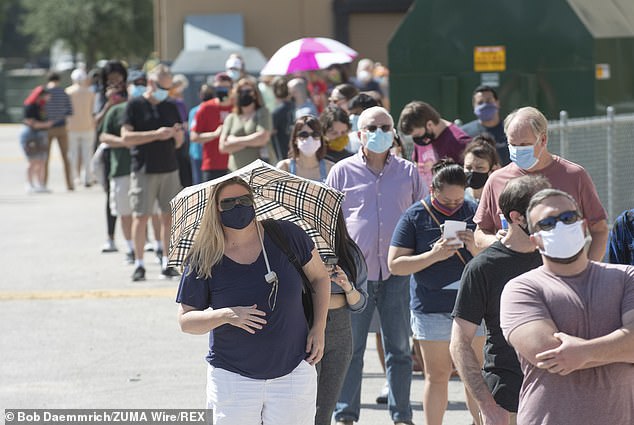 TEXAS: Stephanie Silver of Austin holds an umbrella as long lines of voters queue up to cast their ballots. County elections officials reported record numbers of early voters and only minor processing problems as 14,000 ballots were cast by noon on Tuesday

‘If you look at those lines, they look like they’re long, but everyone is spaced six feet out on center, and that just makes your lines look a whole lot longer,’ he said during a news conference at the Capitol.

The willingness of many black voters to queue up instead of coming back another day is a measure of their determination and their skepticism about the system.

Those in Georgia acknowledged they could have voted by mail or returned to a polling place at a different time; but with no expectation of voting becoming easier in the weeks to come, they saw waiting as a necessary step to ensure their votes get counted.

Similar scenes unfolded in Texas, where some voting locations, particularly in Tarrant County, had wait times of more than an hour. 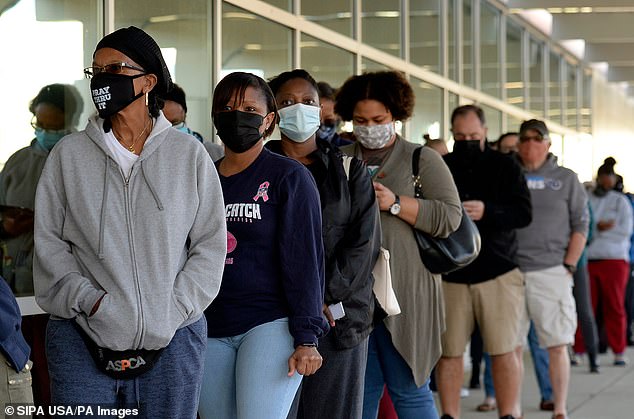 TENNESSEE: People wait in line to fill out a ballot at the Southeast Library on Hickory Hollow Parkway on the first day of early voting on Wednesday, in Antioch 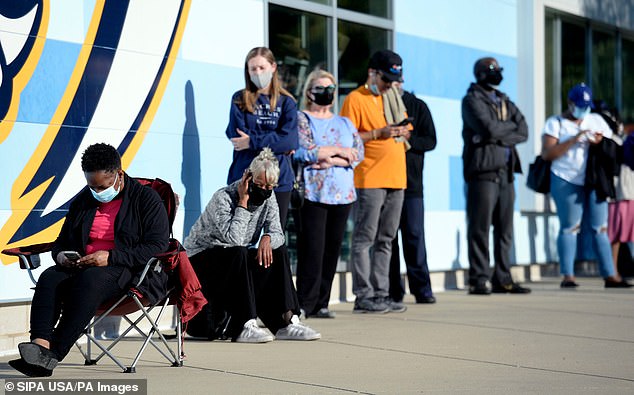 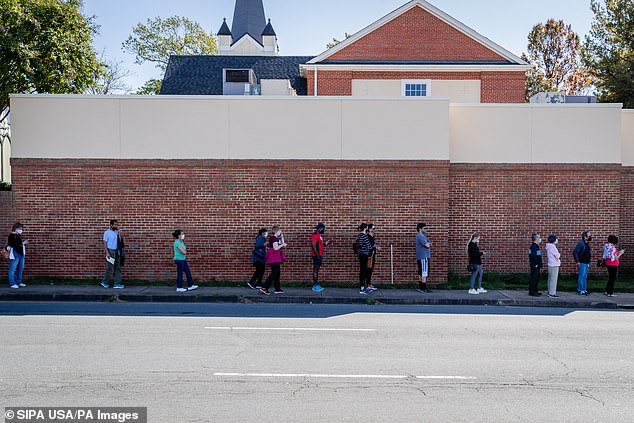 TENNESSEE: Fairfax County residents wait in line at the Franconia Government Center to cast their ballot early ahead of the November 3 general election

In Harris County, voters at several polling locations were forced to wait more than 40 minutes to cast their ballots on Tuesday, according to the county clerk. By noon, 50,000 votes had been received.

Elections officials in Travis County reported record numbers of early voters and only minor processing problems as 14,000 ballots were cast by noon on Tuesday.

Democrats appear to be driving much of the surge in early votes.

In states that report party affiliation data, nearly twice as many registered Democrats have requested ballots than Republicans have, the data shows.

For example, more than 960,000 registered Democrats in battleground Florida have already mailed back their ballots, compared with 564,000 Republicans.

Democratic leaders have been urging Biden supporters to show up in huge numbers and vote early amid concerns that nothing short of a decisive victory will prevent President Trump from contesting the results. 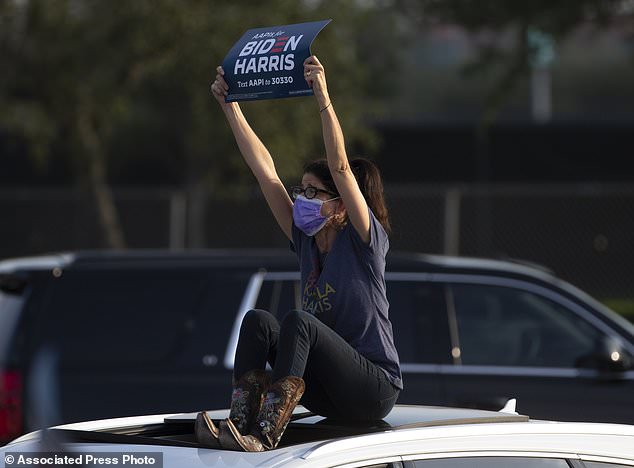 A supporters holds up a sign during a get out the vote event featuring Jill Biden, wife of Democratic presidential candidate former Vice President Joe Biden on Tuesday 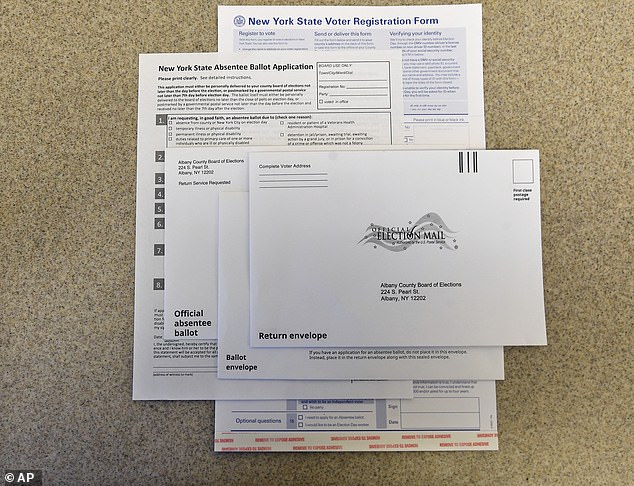 The unprecedented circumstances have also sparked debates on the early voting process which could be done through mail-in ballots or at designated polling centers, depending on the state

The president, meanwhile, has repeatedly warned against mail-in voting, claiming the process was fraudulent and ‘rigged’ in favor of Democrats, while refusing to commit to ceding power peacefully if he loses.

Telling voters to have faith in the democratic process while simultaneously acknowledging that a landslide may be the only way to oust a defiant incumbent is proving to be a delicate balancing act, more than a dozen Democratic Party officials and Biden campaign advisers told Reuters.

What has emerged is an approach that aims to emphasize the power voters hold to send Trump packing if they act early.

In Ohio, for example, David Pepper, head of the state Democratic Party, said his team is using Trump’s attacks on voting to motivate Biden supporters to return their mail ballots immediately or to vote early in person.

‘We are telling people: “You hear what he is saying, so go and vote, you can stop him,” Pepper said. “We are flipping the narrative.”‘

Ohio election officials were overwhelmed with vote-by-mail requests for the state’s April presidential nominating contest, when in-person voting was sharply curtailed there due to the coronavirus pandemic. Ballots for some voters arrived too late.

Kida Kudz – In My Country