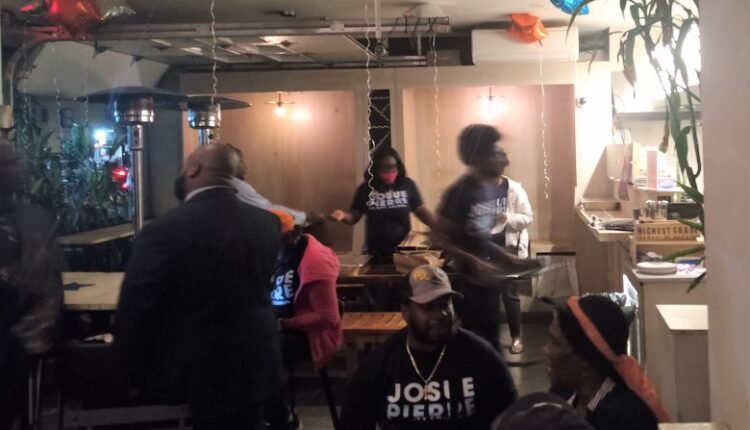 Without a favorite candidate, Scarder said he planned to look things over before making a decision on his vote. His chosen candidate, ideally, will address the rising cost of living.

“People are working, but with their salary, they cannot afford to pay the rent,” Scarder said. “They must be able to do something for the [lower-income] class of people.”

Flatbush voter Innocent Stanley said the opportunity to vote for mayoral candidate and Brooklyn borough president Eric Adams drew him to the polls.

“I feel he’s been an active borough president,” said Stanley, who voted at the Lenox Road Baptist Church. “He participates in many of the social activities in the community, in the borough, and campaigns against gun violence.”

Stanley did not have a preference in the District 40 race to determine who would represent the central Brooklyn neighborhood in the City Council.

The primary elections on June 22 were a significant milestone in a historic year that allowed city residents to vote early in a municipal election for the first time and saw the introduction of ranked-choice voting. Prior to that day, about 191,00 city residents had voted in the Democratic and Republican primaries, according to the Board of Elections. Citywide, more than 4.2 million registered voters are eligible to participate in the primaries.

Like Stanley, many voters in Flatbush council districts 40 and 45 were more informed about the mayoral race than the other contests, including those for city council and borough president. However, other voters such as East Flatbush resident Angela Scott said she planned to reelect her council representative Farah Louis, who in 2019 became the first Haitian-American woman elected to that body.

Scott said she has seen Louis in the district, distributing food. And during the pandemic, the council member’s office helped her family receive food stamp benefits, she said.

“Her office told me, ‘If you ever need anything, this is the place to call,’” said Scott, a housekeeper. “If you do for me, I’m going to pay you back with my vote.”

After casting his ballot at Erasmus Hall, Flatbush resident Marvin Brown said he came to the polls to elect Maya Wiley as New York City mayor. He did not have a favorite council candidate until he met Pierre, who was at the polling site wearing a blue suit, talking to voters. Brown said he liked “the way he was able to engage within seconds.”

In addition to Pierre, three other Haitian-American candidates — Rita Joseph, Edwin Raymond and Maxi Eugene — are running to represent District 40 on the city council.

In the mayor’s race, Wiley’s progressive policies around police reform caught Brown’s attention during the campaign.

“It’s something that [my friends and I] are interested in, especially around defunding the police or police [reform],” Brown said. “I liked what she was talking about.”

In the past week, other voters in Flatbush have voiced concern about addressing the rising crime in the city, often expressing a preference for Adams.

“Public safety is the most important thing,” said Desiree Chapman, a District 40 voter who ranked Adams number one on her ballot, but did not have a favorite council candidate. Adams has pledged to address rising gun violence.

The wait for results

Some campaigns had already begun celebrations on the evening of June 22, after polls closed. However, with ranked-choice voting, city officials have warned it may take weeks before winners are decided in some races.

The Campaign Finance Board said preliminary results were expected on June 29, and absentee ballots will be tallied by July 6, the board said.

News outlets had not made a call in the mayor’s race as of midnight June 23. However, Adams was in the lead as the first-choice candidate with 85% of the vote reported while Wiley was second, according to the New York Times.

Pierre’s campaign team gathered at Erves Bar on Beekman Place in Flatbush. Amid the buzz of chatter from his staff and volunteers, Pierre said turnout was lower than he hoped in the election. With over 90% of votes counted on Tuesday night, the BOE reported 16,218 total votes, in the heavily Haitian district of more than 104,000 registered voters.

“We’re cautiously optimistic, we still have a long way to go,” said Pierre.

Joseph, who had captured about 25% of votes cast by the end of the day to Pierre’s 20%, was drinking champagne with her campaign team at Lakay Venus restaurant, on Rogers Avenue, as results streamed in.

The mood at the Haitian restaurant was jubilant, as the crowd of nearly 30 cheered each time the District 40 results appeared on the nightly news ticker.

“My team put in an amazing campaign, I’m so proud of each and every one of them,” Joseph said. “If I could do it all again, I’d pick the same team.”

Just south in District 45, it appeared as if Louis would be reelected as council member. She had captured 76% of the vote with 94% reporting.

Two other Haitian candidates had a lead in their respective city council races. In District 36, Chi Osse captured more than 37% of first-choice votes, while in District 46, Mercedes Narcisse captured about 36% with most of the vote reported, per the unofficial BOE results. Both races will need to be decided by ranked-choice voting, which could take weeks.