New Yorkers have become exasperated by extremely noisy vehicles with modified exhaust pipes that terrorize residents, many of which blasted the NYPD’s laissez faire response.

The obnoxious sound of revving car engines and the distinct gunshot-like ‘pops’ of vehicles without mufflers gradually inundated the city’s five boroughs this summer – and residents have had enough.

‘Cars and motorcycles are completely out of control now that the cops are nowhere to be seen and there’s no traffic in Brooklyn,’ one person vented on social media in June. ‘It’s really dangerous and scary.’

It’s the latest blow dealt to millions of residents who stumbled through a tumultuous year defined by the coronavirus pandemic, and a summer overtaken by people launching a bevy of sleep-depriving fireworks and bouts of looting.

Meanwhile, the NYPD’s resources have been cut thin as their enormous budget was slashed by $1billion and they have increasingly come at odds with the public amid anti-racism demonstrations.

Two lawmakers have subsequently proposed a bill that would crackdown on the boisterous vehicles with increased fines. 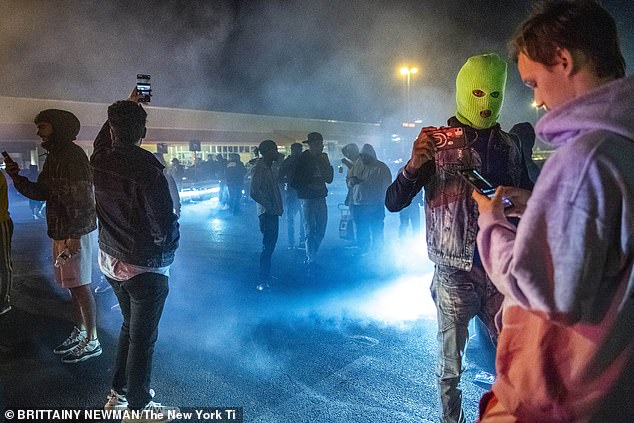 As the COVID-19 pandemic shuttered city life, more residents dove into the underground car community in the city 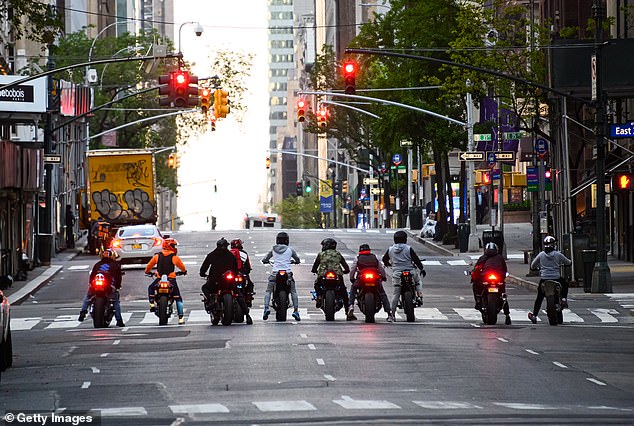 Pictured: Bikers are seen in midtown during the coronavirus pandemic on May 13, 2020 in New York City

Inklings that New York City would experience a rise in noise complaints started earlier this summer in the midst of the COVID-19 pandemic.

By May, the country had been placed on stay-at-home orders as cases and deaths skyrocketed.

Much of America watched as New York City’s morgues overflowed, hospitals became overrun, front line workers pleaded for PPE supplies on social media and one of the most buzzing cities went quiet.

Except for the increasing wave of souped-up cars performing donuts on residential streets, the crack of muffler-less vehicles and squeal of tires kicking clouds of smoke into the air during drag races.

With streets relatively empty and extra time available during the pandemic more enthusiasts and gear heads have flocked to the underground car community. It’s a welcomed diversion to some, who’ve become bored by quarantine restrictions and want a somewhat social distanced activity.

Large groups of enthusiasts gather at industrial or outlying spaces, like empty parking lots, to explore their somewhat controversial hobby.

The Times reports that noise complaints – labeled as ‘engine idling’ – have upticked by more than 40 per cent since the same time last year. 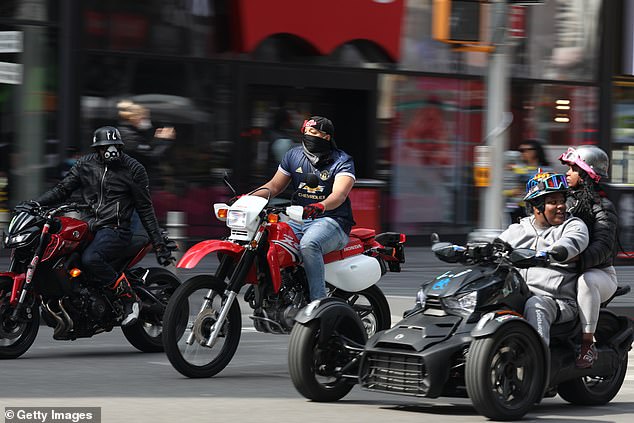 Pictured: A view of motorcycle riders during the coronavirus pandemic on April 19, 2020 in New York City 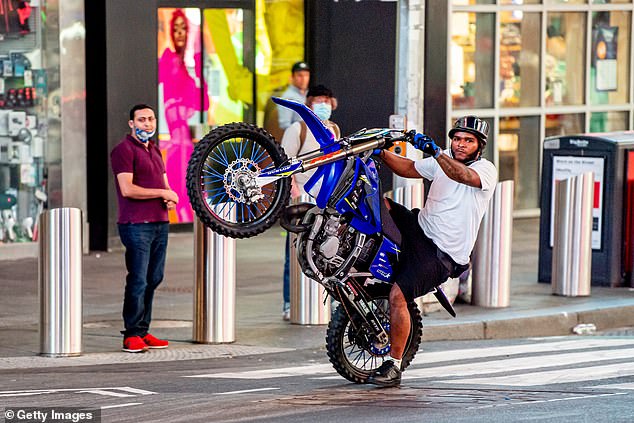 New York City resident: ‘Cars and motorcycles are completely out of control now that the cops are nowhere to be seen and there’s no traffic in Brooklyn’ Pictured: A man does a wheelie on a motorcycle in Times Square during the fourth phase of the coronavirus reopening on August 18

Brooklyn, Queens and Manhattan accounted for the largest number of complaints, but calls increased in the Bronx by 150 per cent and in Staten Island by 75 per cent,’ the publication said.

Data shows the most recent ‘engine idling’ complaint was filed on Saturday on Putnam Avenue in Brooklyn at 1.57am. Several other similar complaints were launched throughout the wee hours of Saturday.

The exceptionally loud racket can be blamed on modified exhaust systems and drivers removing their vehicle’s mufflers.

The Times reports that local car shops haven’t reported an increase in modification orders, likely because community members have made the changes themselves.

One point of contention among critics, and even some enthusiasts, is a modification called a straight pipe.

After making adjustments, this specific type of tailpipe can make an exhaust sound reminiscent of a gunfire.

‘Anyone else from New York City sick to death of these loud, obnoxious backfiring muscle cars!’ one resident said in August.

The noise is a burden to many New Yorkers, including outdoor diners frightened by the engines, parents putting young children to sleep and can be triggering to those suffering from Post-Traumatic Stress Disorder. 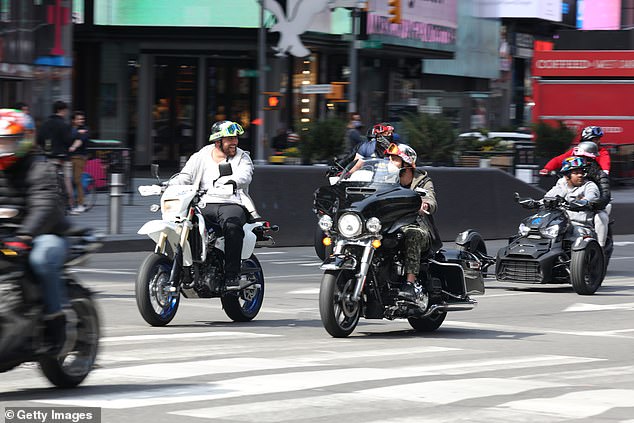 Tora Yi per New York Times: ‘People are kind of tense, they have something in their mind all the time that, ‘Oh, the city is not safe anymore”‘

Tora Yi, chef and owner of Shanghai Mong in Midtown, told The Times that diners on his patio have repeatedly been spooked and scared by loud cars speeding by.

Between the thundering vehicle, concerning unemployment levels and a recorded rise in crime, Yi said the city is reeling.

‘People are kind of tense, they have something in their mind all the time that, ‘Oh, the city is not safe anymore.’ Then you hear that kind of noise all of a sudden, and it’s scary,”‘ he told The Times.

Scores of New Yorkers have flooded to social media to voice their grievances.

‘Thinking of starting a petition or [something] to get rid of motorcycles and cars with loud ass exhausts in #nyc,’ one man wrote. ‘There’s no reason these idiots should pollute a city with millions of ppl w/ their stupid noisy engines.’

‘It’s awful,’ one person wrote in June on Reddit, ‘It’s worse than normal, agreed, because of the lack of traffic.

Twitter user: ‘Anyone else from New York City sick to death of these loud, obnoxious backfiring muscle cars!’ 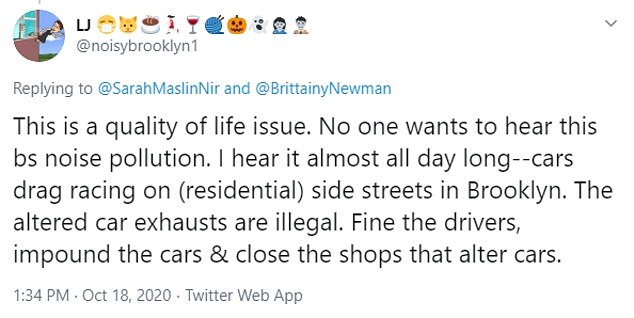 ‘Also, people who own cars and motorcycles have a lot more time available to go f*** around in them. I support the socially-distanced playtime, just not on our tight residential streets.’

‘It’s absolutely driving me insane. I live next to the [Brooklyn Queens Express], and I literally JUST had a building-rumbling-level amount of loud as hell vehicles pass by,’ they wrote.

‘Dunno what to do, me and my cat both perk up cause of anxiety every time.’ 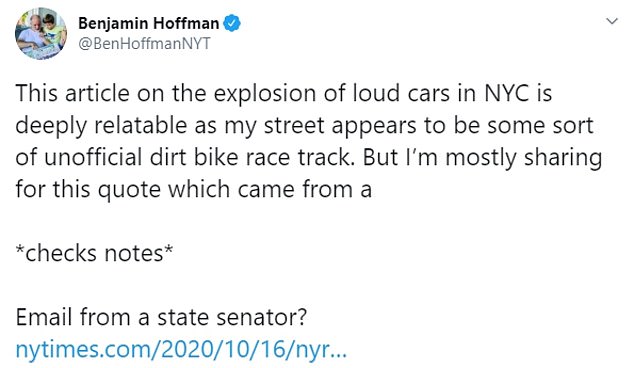 Benjamin Hoffman chimed in, saying ‘my street appears to be some sort of unofficial dirt bike race track’ 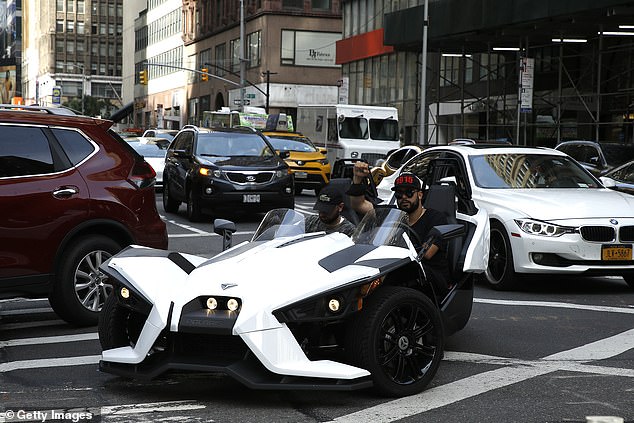 The driver of a three wheeled custom motorcycle raises his arm as the city during the pandemic, which cleared up roadways and gave car enthusiasts additional time

Some residents stated that the increasing noise was a ‘quality of life issue’ that sparked from the ‘noise pollution.’

‘No one wants to hear this bs noise pollution. I hear it almost all day long–cars drag racing on (residential) side streets in Brooklyn. The altered car exhausts are illegal,’ a Brooklynite added.

‘Fine the drivers, impound the cars & close the shops that alter cars.’

And for others, the perceived lack of response from the NYPD was baffling.

‘I don’t really understand how you can get away with this,’ one account wrote.

‘It doesn’t seem like these cars have an on/off switch. They’re just always extremely loud. But somehow they aren’t just drowning in tickets from being constantly pulled over every time they pass a cop?’

One person suggested the NYPD was ‘openly broadcasting their position’ by not launching a more active crackdown. 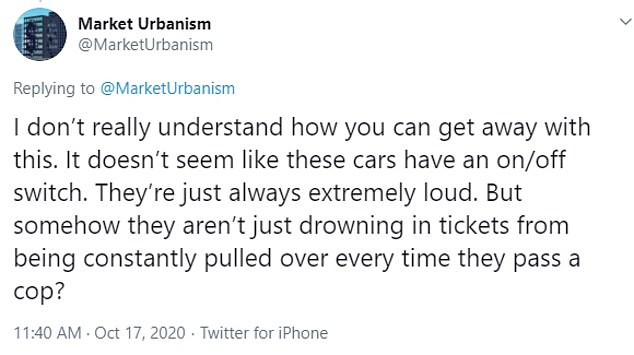 The NYPD, on their part, has been stretched thin following a reckoning from both city officials and civilians alike.

The death of George Floyd this summer sparked a nationwide re-examination of law enforcement as an institution and its role in police brutality.

In June, de Blasio announced that he would cut funding from the NYPD’s budget after a wave of anti-law enforcement sentiment overtook the nation.

As calls to defund police departments roared, de Blasio and other city mayors vowed to redistribute the money toward community initiatives like youth programming.

De Blasio also criticized the NYPD several times in recent months over their handling of Black Lives Matter demonstrations, which saw social media flooded with clashes between officers and civilains.

This, coupled with the stress of the pandemic, has reportedly led to widening chasm between the NYPD and city officials. 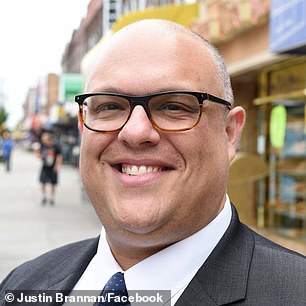 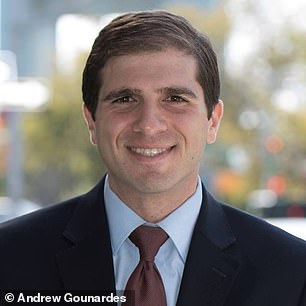 Now, Sen. Andrew Gounardes and City Councilman Justin Brannan have proposed a bill aimed at stomping out the modified mufflers.

‘Our legislation will curtail this anti-social and dangerous behavior and let neighbors get some sleep once and for all,’ Gounardes told New York Daily News.

Called the Stop Loud and Excessive Exhaust Pollution, of SLEEP, the legislation would raise fines from $150 to $1,000 per violation.

The bill would also set the maximum noise limit at 95 decibels. Police vehicles could become equipped with decibel-reading devices.

Current law required officers to determine what noise is ‘excessive or unusual,’ and lawmakers argue that the proposed legislation would make it easier for authorities to enforce the rule.

‘Anyone who purposely modifies their exhaust system so it sounds like a goddamn machine gun is not only desperate for attention but also clearly overcompensating for something else,’ said Brannan.

‘This bill will hopefully make these idiots think twice and bring some peace and quiet back to our neighborhoods at night.’

Ashley Graham Strips Down To Nothing For The Gram: “Nakie Big Girl”